A custom is an established practice of doing things which are acceptable within a specific organization, and abhorrence or a refrain from doing things that are unacceptable to such an organization. In the Marines in particular, such customs constitute legislative laws that govern the army or cordial, gentlemen behavior in executing the duties of a military officer or personnel. Military courtesy on the other hand relates to the good relations between and amongst soldiers, fostered trough stipulated gestures and behavior towards, personnel, officers or NCO, depending on the rank.

Don't use plagiarized sources. Get your custom essay on
“ Custom and Courtesies Military Today ”
Get custom paper
NEW! smart matching with writer

They include mutuality, respect gestures such as salute and standing reveille. Such courtesies are mostly legislated within the army manifesto and are binding to the entire army contingent.

However, the gestures have some relaxation and applicatory allowances, offered by the senior officer being accorded the courteous gesture or depending on the circumstances. In this essay, the writer enumerates some of the customs and courtesies, legislative or non-legislative within the organizational unit, with special emphases on the mutual relation between the army personnel and NCO (Non-Commissioned Officers).

The writer also illustrates some compromisory tendencies in these customs and courtesy relations, and their impediment to the overall discipline amongst and between the armed forces and other organizational institutions. Such a laxity in the military, if extrapolated to the execution of its duties, can contribute to a mission failure.

Customs of executing a duty by a soldier are inbuilt within his cognitive being by decades of military engagement with the enemy. These customs define both the relations amongst the soldiers and between him and the civilians.

Soldiers are not required to express their personal opinion concerning their regimental commanders, or a countries politics to the general public. The regimental commanding officers also include the NCOs. He is also supposed to respect and strictly follow the bureaucratic ladder of military administration in executing his duties or giving orders.

This requires a soldier also to give instructions or orders in his or her own voice. An escapist attempt in rendering respectful gestures to a senior is grossly censured in the military, with the soldier being required to respond to every question intoned by his or her superiors. Some customs are observed as gentlemen’s agreement of good cordial relations, with strict customs being legislated and inviting heavy penalty, if violated through censures or other setout disciplinary actions.

Courtesy among the army is fostered in form of good behavior in dealing with the civilian or fellow officers and personnel. Among the army courteous gestures such as salute, are as an accordance of mutual respect rather that an obligatory responsibility. An army personnel or office is required to salute a higher ranked officer outdoors, when in uniform, reservedly if under practicable circumstances, without escapism maneuvers. The salute is also to be accorded to officers of friendly nations. Several standing reveille are also required of the Marine Corps personnel or officer while addressing or being addressed by a higher ranking officer. When addressing a higher ranked officer, a soldier is required to stand at attention, with relaxation allowances to the standing reveille being offered only to the instruction of the senior officer being addressed.

However if such a relaxation is allowed in the standing reveille, the soldier is still required to stand at attention and salute on delivering the report, or on exit of the senior officer. A call by a superior officer in personnel room, calls for attention standing reveille requiring no salute indoors. However if the officer is an NCO, the personnel are only required to be hush and be calm, but they can continue being seated. The soldiers are also required to walk on the left hand side of their superior officers including NCOs, with a soldier being required to salute the NCOs by title on such outdoors encounter. In reporting to such an officer, the soldier is required to address him sir or ma’am, at attention two steps from him, with his headgear on or off, depending on whether he is armed or not (P. G. Kivett, Esquire, 2006). 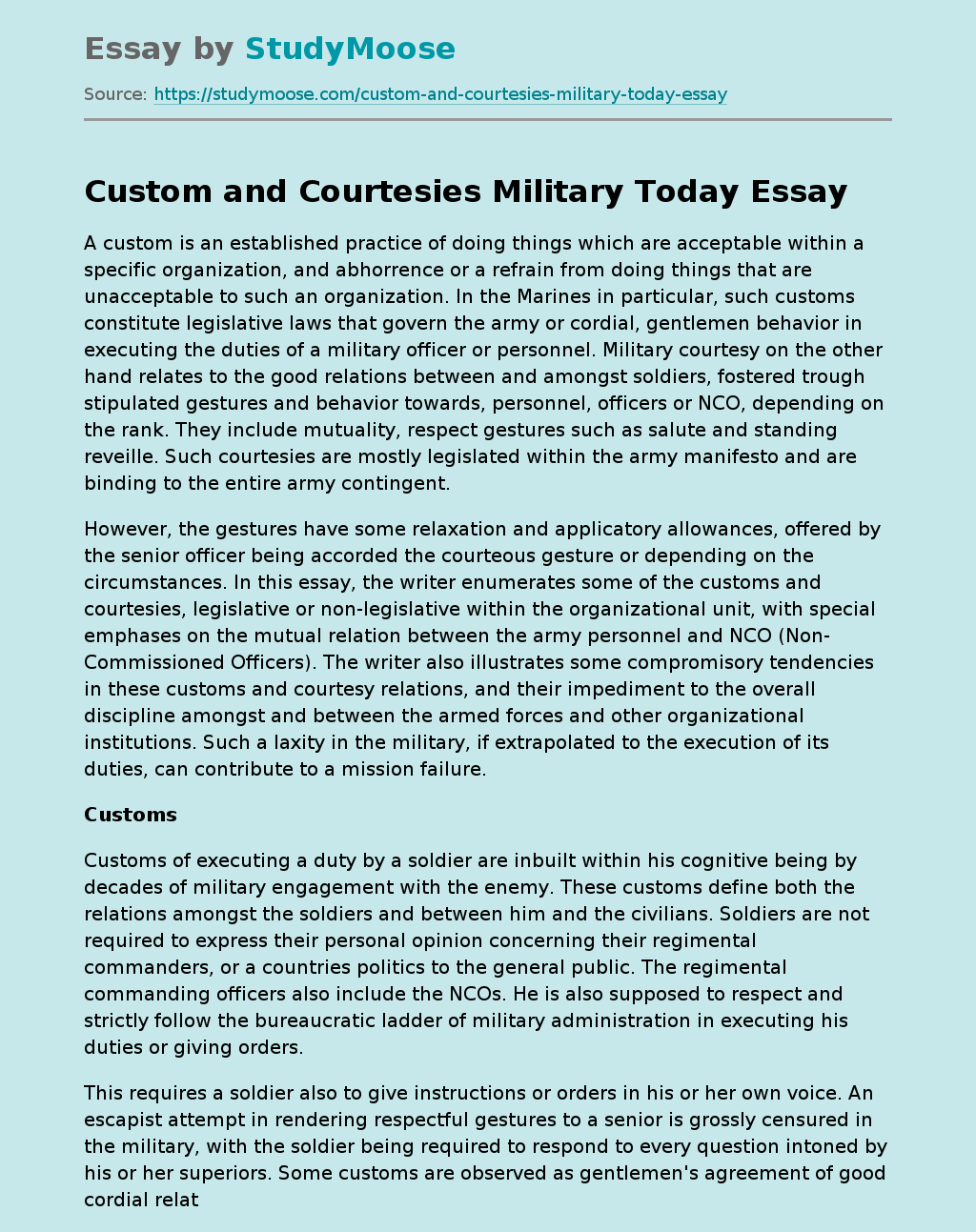