Curse of the Internet

‘The internet is a curse on modern society’ to what extent do you agree with this view?

From the mid 1990s when Sir Tim Berners-Lee created the World Wide Web and the Internet grew dramatically, it has progressively dominated our lives. The vast volume of information that is now available to us and the ease at which our ideas and documents can be shared, has transformed the way in which we find material and communicate. It has also had a huge impact on business, particularly retail.

Turn in your highest-quality paper
Get a qualified writer to help you with
“ Curse of the Internet ”
Get high-quality paper
NEW! AI matching with writer

However, these huge changes inevitably bring with them some negative consequences, particularly those to do with illegal file sharing and risks to privacy.

The Internet is capable of many things but undoubtedly its main purpose is to provide the world with unlimited information. Rather than look something up in a book, today many people just ‘Google’ it, a phrase that was coined because of the dominance of Google as the world’s leading search engine.

The vast amount of material on the Internet has helped people expand their knowledge and has also enabled anyone to post their opinions to the world via sites such as Blogger. Due to the sheer quantity of information we are now all spoilt for choice. What goes in a playlist when all the music ever recorded is one click away? How do you choose a book from the millions that you can discover with a Google Books search? Not only is it all difficult to choose from, we also have to question its accuracy.

Anyone with Internet access can upload false information and there is rarely any kind of reviewing process. It is almost second nature to doubt an Internet source. However, the Internet is a medium by which well known institutes and organizations publish their documents for the widest range of people and the presence of forums allows all information to be publically reviewed, presenting new arguments that one might have not considered oneself. As long as people are vigilant about their sources, in terms of information access, the web must surely be considered a positive. The ease that people can find a vast range of material is far more time efficient and allows people to be much better informed.

One of the biggest impacts Internet has had on modern society has been
communication. Communication has been improved by the introduction of social networks such as Facebook, Twitter and Instagram. Facebook has approximately a billion users. This fact alone emphasises the importance that social networks have had on global communication. The most significant impact the Internet has had is the idea of sending emails and chatting. In the pre-information technology days, a document often required re-typing on the typewriter before the final version. Sending the letter across to someone else required a visit to the post office or letter box and a postage stamp. People are now able to send emails and chat messages with one click. However, some have argued that this increase in online communication has reduced the amount of time that people spend actually talking to each other face to face or on the phone. Also, especially given the introduction of Internet on phones, people are constantly checking their phone and this disrupts proper conversations.

Anyone is able to post onto the Internet and as a consequence, in recent years the Internet has faced problems with confidentiality. Google and Facebook have been accused many times of breaching privacy laws and have access to all your searches and Facebook messages. Google is the one most under threat. Both the European Commission and America’s Federal Trade Commission have been investigating allegations that it has unfairly manipulated its search results to favour its own services. The company also stands accused of several other transgressions, including using patents to prevent competition in the smartphone market. It is not only the average Facebook user that has been affected, Governments have also experienced difficulties surrounding privacy on the Internet. The website WikiLeaks has been in the news in recent years as it has leaked confidential government information to newspapers and has posted the information onto their site. The founder of WikiLeaks, Julian Assange, has faced many charges.

The Internet was not created for profit but due to the success of the Internet and the influence it has had on modern society, search engines such as Google and Internet Explorer have now been able to use advertising as a source of income. After advertising, online retail developed through companies such as Amazon and eBay and increased global retailing. These online sales have had a huge influence on economies, for example ‘in 2006 the USA brought in $170 billion through online retail’ (BBC News) and in 2011 recorded figures of $256 billion. The Internet is estimated to be worth around $2.5 Trillion in 2020 and will continue to grow. The web has had a significant effect on the music industry. The majority of records are bought online, ‘the company Apple have 425 million people using their iTunes Store’ (BBC News) The Internet has caused a transformation in the music industry and has provided artists with more exposure. However, it has also caused the increase of illegal downloads such as Limewire and Frostwire.

The internet has been a revolutionary technology, and the speed by which it has transformed business is remarkable but after just a single decade of commercialisation, it is unlikely yet to have fully realised its full potential. Now almost every company has a website as ‘Few big businesses can afford not to have an internet site to advertise and sell their wares’ (BBC News) Online businesses have expanded economies and over the years have been beneficial towards society. However, due to the dramatic increase of online retailing, the concern over the possible downfall of the high street shop has been raised, if online retail continues to grow will we see less shops on our streets?

The Internet undoubtedly dominates the modern world and the access we now have to information and communication technology has allowed the Internet to move society forward and is beneficial. The Internet is in no way perfect and there are clear problems that need addressing but we must consider that it is relatively new to society and that it will improve in time and that maybe we have not realised its full potential. It has helped economies to flourish. It has allowed people to become more connected to each other, and holds exciting prospects for the future.

-The Wealth of Networks by Yochai Benkler

-The future of the Internet, and how to stop it by Jonathan Zittrain ( http://futureoftheinternet.org/

-The Net Delusion by Evgeny Morozov

Curse of the Internet. (2016, Mar 23). Retrieved from https://studymoose.com/curse-of-the-internet-essay 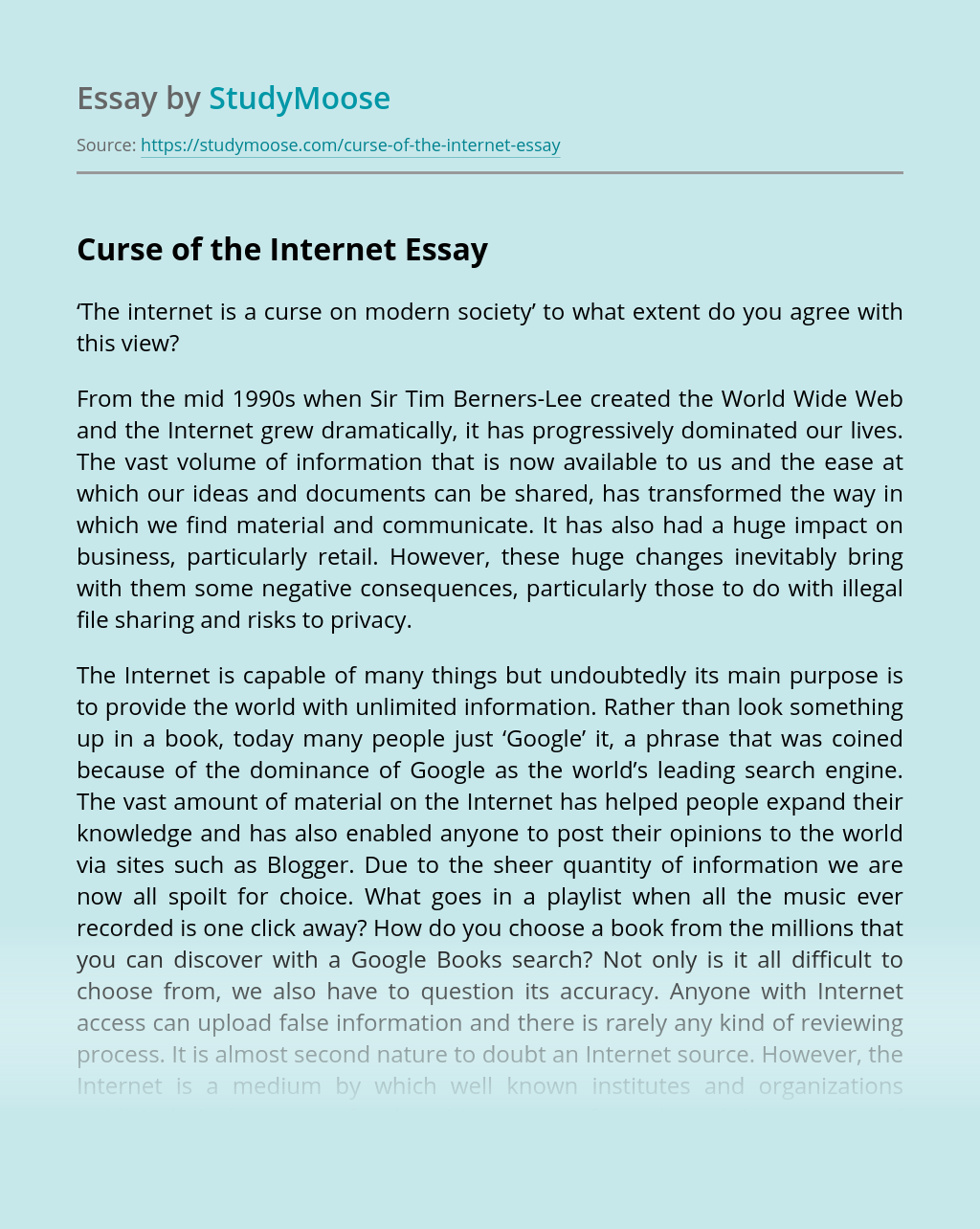 Turn in your highest-quality paper
Get a qualified writer to help you with
“ Curse of the Internet ”
Get high-quality paper
Helping students since 2015
Stay Safe, Stay Original