In the novel by John Steinbeck their was one character that really expressed his feeling to me and that character was Curley’s wife.

Why am I such an emotional bucket? I’m not grumpy, im just lonely, noone gives me any attention, but all they want to do is just hurt me, by secluding me out because I am different, because I am a woman, my whole life has been denied to me, since I met that man in the club I thought my life was made, then my mother goes and denies my happiness and freedom to do whatever I want, even something good like going into the pictures, I did make a mistake because of my mothers fault, I married curley, that horrible horrible man was meant to be my escape from mother,…my Revenge…,but it didn’t happen, I just dug myself a deeper hole, I met curley in that club where I met the man, I met him the same night and i only really did it to get back at mother, that’s what she gets for ruining me life, Now,because of her I will never get my dream, and it could have been a reality, if that bag had’nt stopped my letters,…Everyone is so mean to me, they don’t pay any attention and attempt to completely blank me from their life.

Don't use plagiarized sources.
Get Your Custom Essay on Curleys Wife’s Diary Just from $13,9/Page

Like when I was in the niggers tiny little hut,But I showed that stupid nigger why he shouldn’t treat me like dirt, because I am more important then him, even a secluded girl like me has more respect then a god damn nigger.

I threatened to hang that man, he shouldn’t even be working here, he has a stupid back problem and looks like dung, he Should be shot.Also that stupid smelly sheep man Candy was there, what is he still doing in this ranch? He should have been kicked out ages ago, his a dumb smelly old man with no purpose , I Remember when I first showed George and lenny around the ranch.I was trying to make new friends is all and everyone was angry at me, including george, who tried to make that dumb bear ignore me as well.

Then later when I asked where curley was, they all gave me bad looks, because I am a woman and I am different an they can not cope with that.I remember when I was sitting with lennie, the bear. I Saw that puppy he had killed and he was so panicy, trying to hide it from me, when I found it though he told me all his problems and he wasn’t so bad, we talked but all he seemed to care about as rabbits, he didn’t seem to pay attention to my troubles. But I guess he is dumb,

All the men think I am trying to flirt. Sometimes I am talking to someone and they give me bad looks and tell me to go back to curley, as if he is my owner or something, and if they do not say that, instead curley beats me up,

Lennie was telling me once that he likes to stroke things,… and he also said that that’s how the puppy died and how all his pets die, and how he once had an aunt called clara who gave his special clothes for him to stroke.

I think he is dumb or crippled in the head,. He told me that once he got in trouble with a girl in weed because he touched her dress and he was chased, 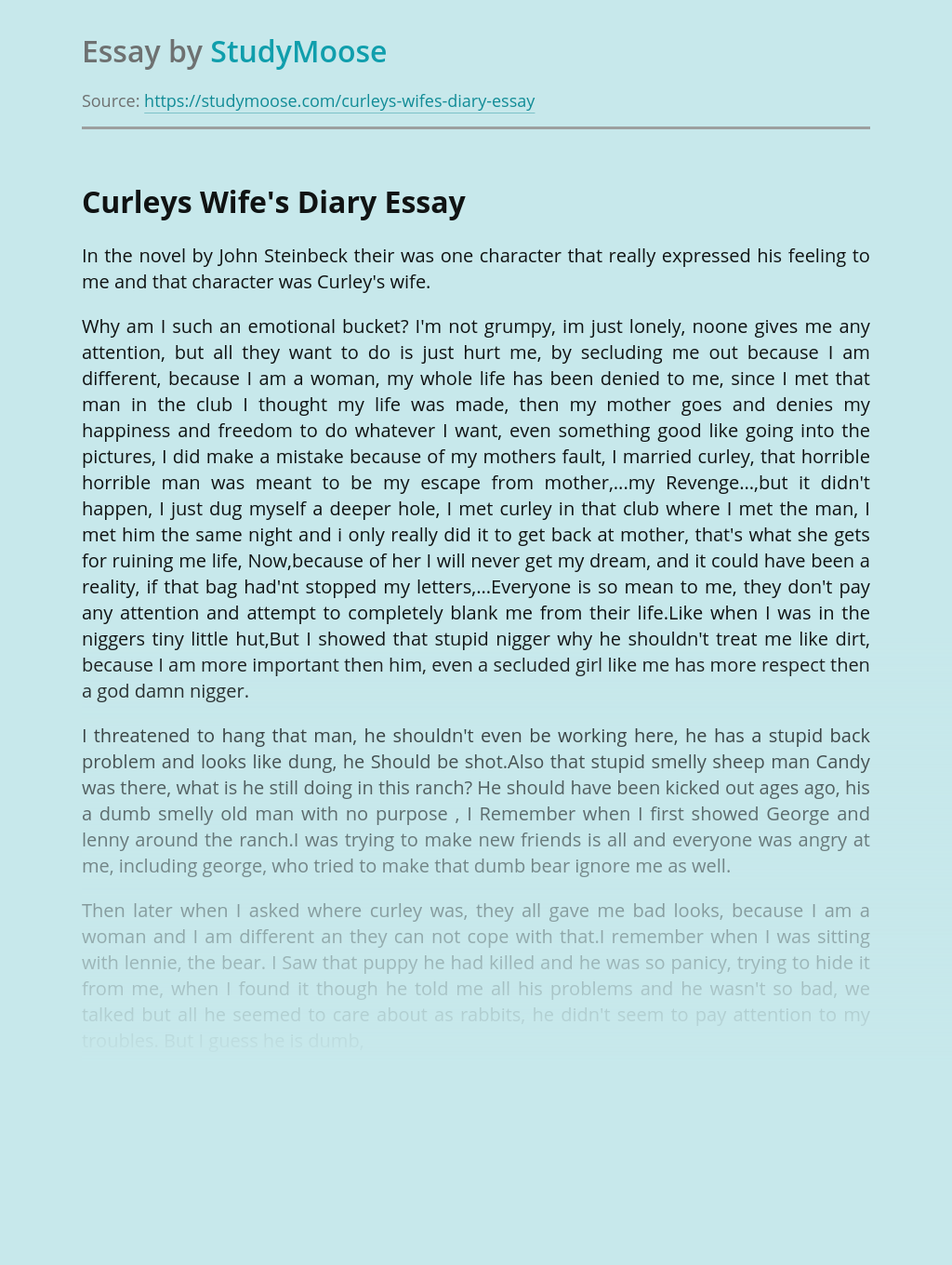 Rate this post ‘Of Mice and Men’ is a short novel by John Steinbeck, which is set in 1930s America. At this time in American History they were suffering from a hard hitting economic depression. This book is set on a ranch in Soledad, California. Throughout this novella, Steinbeck addresses key theme, for example discrimination,...

How Is Curley’s Wife Presented - Victim or Villain?

Rate this post Curley’s wife is the only women at the ranch in Of Mice and Men. She is generally portrayed as a young, lonely, bored and childish girl. “Baloney!” is her ‘word.’ This single word shows that she thinks she is a movie star. No one really talks like this. All the way through...

Get Essay
Characterization: Curley's Wife in Of Mice And Men

Rate this post With colorful statements like “She had full, rouged lips and wide-spaced eyes, heavily made up. Her fingernails were red. Her hair hung in little rolled clusters, like sausages. She wore a cotton dress and red mules, on the insteps of which were little bouquets of red ostrich feathers” (John Steinbeck, 31), Curley’s...

Character of Curley’s wife in Of Mice and Men

Rate this post The novel Of Mice and Men was written in the 1930’s by a man named John Steinbeck. The book is set in America and at a time during the Great Depression. This was when the stock market had crashed some years prior, lots of companies went bankrupt, the banking systems failed and...

How Does Steinbeck Presents Curley's Wife in of Mice and Men

Rate this post Curley’s wife is a significant personality in the novel. John Steinbeck presents her in different ways during the novel and uses different methods to influence the reader’s judgement, for instance through her look, as she is a complex character. Significantly Steinbeck makes it clear that nurture turns her into the person she...

Explain the importance of Curley's Wife in the novel

Rate this post Plan: * Symbols – red lipstick * Not given a name Curley’s wife may seem an insignificant character because she has not even been given a name by Steinbeck. Her name suggests that she is nothing more than one of Curley’s possessions. When she first appears in the novel, she is dressed...

Rate this post In this essay I intend to write about why Crooks and Curley’s wife experience loneliness and isolation and in what way they try to deal with these difficulties. Crooks is a nergro stable buck with a crooked spine. His eyes are described as the most noticeable feature on his face, brimming with...

How does Curleys Wife appear to be weak In Of Mice and Men and how does she manipulate her power?

Rate this post Power has an important role to play in Steinbeck’s ‘Of Mice and Men’ throughout the whole novel. Power is displayed through authority, wealth, control, strength, and status – and the quantities of these that each character possesses determines their place in the hierarchy of power in the novel. Curley’s Wife is considered...