Cities across the United States have imposed curfews on juveniles for many years. Teen curfew laws restrict the hours that juveniles may be on the streets or in public places at night (Sutphen and Ford). Some people consider curfews infringing on people’s constitutional rights. Curfews are hard to implement by law enforcement, and, in fact, take law enforcement away from more serious crimes. More crimes occur during daytime hours and more children are victimized in their homes than on the streets.

Don't use plagiarized sources. Get your custom essay on
“ Curfews vs Juvenile Delinquency ”
Get custom paper
NEW! smart matching with writer

Although curfews are made to protect our juveniles and to deter crime by juveniles, does imposing these curfews violate the juvenile’s civil rights and target the true underlying problems involved in enforcing these issues? People have a right to personal freedoms, including juveniles, but curfews take away some personal freedoms of juveniles. A 16-year-old en route to a fast-food restaurant is stopped and questioned five times, by five different police officers (Davidson).

Even though this teen had no intension of any mischief, he or she was stopped five times.

When a juvenile transitions from a child to an adult they are required to take on more responsibilities, curfews limit them as they make the transition into adulthood. This hinders the juvenile from making adult decisions. Youth curfews use the idea of childhood based on innocence/ignorance, passivity and dependence, in order to prevent young people from crossing the boundary into adulthood before society deems them ready (O’Neil).

If the state leaves guidance in the hands of the parents, they can monitor their child’s development and gradually increase her liberty and responsibility by allowing her to experience new situations and to make choices as she develops into an adult (Assessing the Scope if Minors’ Fundamental Rights: Juvenile Curfews and the Constitution). Curfews stifle the personal freedoms of juveniles.

The enforcement of curfews presents even more reasons to abolish curfews. It is hard for law enforcement to enforce curfews and curfew violations are not taken seriously. Juvenile curfews will not stop young people who are intent on committing crime, in part, because the penalties for a curfew violation are not that serious (O’Neil). There are also limited police officers to help with the enforcement of curfews. Because of the curfews, it takes the police away from more serious crime that are happening in cities across the United States.

The enforcement of juvenile curfews is hard to put into effect, and there are limited police officers to enforce these curfews, which are often not even taken seriously. Crimes by juveniles occur more often during the day than at night. When either both parents work, or there is a single parent household, juveniles must come home from school alone. Since juveniles are left unsupervised, they sometimes commit crimes and these crimes usually occur during the day.

Those opposed to curfews replied that most juvenile crimes occurred in daylight hours, that most children were not criminals, and that many legitimate nocturnal activities were being suppressed (Juvenile Curfews and the Major Confusion Over Minor Rights). Since most juvenile crimes occur during the day, why should a curfew be imposed on juveniles? One of the main reasons juvenile curfews were imposed, was to protect the juveniles from the dangers that could occur during the late hours of the night.

Although many feel curfews protect juveniles from these dangers, many times that is not the case. Many juveniles are victimized in their own homes. Critics argue that because many juvenile crimes occur during the day and most juvenile victimization occurs at home, nighttime curfews fail to target the worst problems (Juvenile Curfews and the Major Confusion Over Minor Rights). Although juvenile curfews were put in place to protect children, the streets are not always the places where children are victimized. Most large cities in the United States impose juvenile curfews.

Juveniles have rights to the personal freedoms their parents allow and the government needs to let the parents raise their children without interference. Because most juvenile crimes are committed during the day, and since curfews restrict night time activities, we should abolish these curfews. Curfews also take law enforcement officers away from more serious crimes. Curfews were made to protect juveniles and to deter juvenile crime, but since most juveniles are victimized at home and most juvenile crimes are committed during the day, curfews are ineffective and should be abolished. 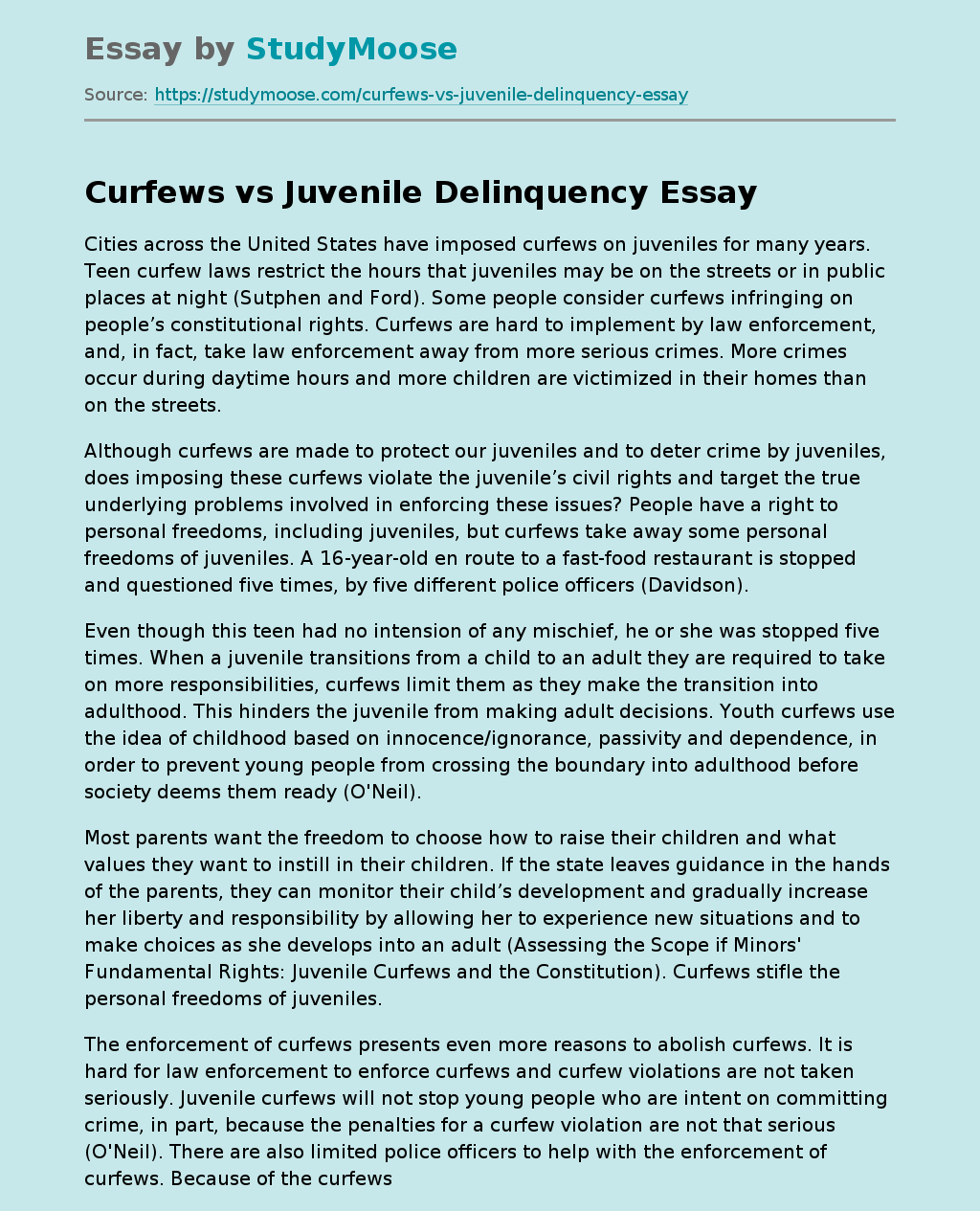