There are certain individuals that cannot adopt the environment in an instant. One good example is when an individual entered a new environment, thinking that he can cope with someone’s culture immediately. Methods of handling Culture Shock vary cross-culturally, all people make up with the situation and build their identity differently. Factors such as general behaviour, motivation to acclimatize, skills in language, fellow and host nationals support, the distance in cultural facet of two cultures involved and mainly familiarity made during the encounter are factors of degree of this acculturation of Culture Shock.

Turn in your highest-quality paper
Get a qualified writer to help you with
“ Culture Shock Among International Students ”
Get high-quality paper
NEW! AI matching with writer

In general, “Culture Shock can be defined as the process of initial adjustment to an unfamiliar environment” (Pedersen 34).

Mostly, people who travel a lot in other country experience Culture Shock, whether it’s a temporary vacation or become a new resident for a certain place. All of a sudden the person is on the state of shock. Life becomes impulsive for them and they have problems with coping even with the simplest aspects of living. Culture Shock was first introduced in Kalvero Oberg’s literature, 1960.

Oberg defines Culture Shock as “precipitated by the anxiety that results from losing all our familiar signs and symbols of social intercourse.

These signs or cues include the thousand and one ways in which we orient ourselves to the situations of daily life” (176). Oberg talks about the visual aspects of culture such as customs, language and attitude as in contrast to beliefs and values they can be pragmatic. Individuals tend to judge visually and applying their beliefs is responsible for the anxiety. Many scientists establish their own meanings of Culture Shock but most of them are closely related to the definition of Oberg. For example, Hofstede defines Culture Shock as “a state of Makarova 2

distress following the transfer of a person to an unfamiliar cultural environment”, that can be accompanied by physical illness (97). Elisabeth Marx just simply calls it “the experience of foreignness” (71). Evidently, most of the definitions have in common, that Culture Shock is an unpleasant reaction encountered with an unfamiliar culture. According to Kalvero Oberg, Culture Shock has four stages. The Honeymoon Stage is where a person feels excited about the adventure. The Crisis or Cultural Shock Stage is when a

person tries to look up for new things and becomes aware of the differences between his own culture and the other new culture. The Adjustment stage is the stage where the person starts to recover, accepts the new culture and sense of self comes back. And lastly the Adaptation Stage is when a person resumes his conversant pattern but now has a different contextual from the new culture (177). People who encounter this kind of situation behave in a very different way and have all sorts of feelings.

In his original article, Oberg lists six main aspects of Culture Shock: 1) strain caused by the effort to adapt; 2) sense of loss and feelings of deprivation in relation to friends, status, profession and possessions; 3) feeling rejected by or rejecting members of the new culture; 4) confusion in role, values and self-identity; 5) anxiety and even disgust, anger about foreign practices; 6) feelings of helplessness, not being able to cope with the new environment (180).

Bad temper, fears of being cheated, contaminated and injured or disregarded, the feeling of purposelessness are the signs of Culture Shock that Adler have observed (21). “The symptoms may range from mild irritation to surprise or disgust” (Scupin 124). It stands to reason, everybody reacts something new, unusual and strange differently. Almost everybody who spends some time abroad experiences the problem of Culture Shock due to cross-cultural differences. This hold true for international students as well who left their home countries to study overseas.

Leaving home and travelling to study in a new country can be a stressful experience. Research provides substantial evidence that Culture Shock has negative effects on international students. But it should be mentioned that Culture Shock among them has some peculiarities. Firstly, students who goes abroad to study at universities leave their families and friends Makarova 3 at home, they have to live alone in another country where there are not acquaintances. They don’t have usual support close to them and first of all should meet new people and make friends with them.

Secondly, the main task for students is to study, to concentrate on getting new knowledge, to learn a lot of information. But it is difficult enough because they find themselves in totally new surroundings. Thirdly, young people have to obey foreign teachers which have their special viewpoint and demands. They should forget about their habitual rules and adjust to new ones. Fourthly, it is necessary for them to count their money because prices can be higher or lower in comparison with their own country and at home it was their parents who paid for everything.

That’s why, some students don’t just know how to spend money economically. So, keeping to a budget can help to survive. Fifthly, parents don’t always provide their children who study abroad with enough money. Moreover, students don’t always have a very large grant and sometimes they don’t have it at all. Therefore, young boys and girls have to find a job and earn money to help their parents and be able to buy what they want. Sixthly, unknown food, strange shops, new traffic code are everywhere and it isn’t easy to understand everything at once and get adjusted to it.

Food should be tasted, shops – explored, rules – learnt and it can take much time. And seventhly, students don’t know anyone and every day they meet more and more people. Some of them are friendly and ready to help, some don’t pay attention to strangers, others can be hostile to foreigners. So, it is very important to start communicating with those who will help and support. These special feature can explain why international students should overcome Culture Shock fast. They just have no time to go through all stages, they have to study.

It seems that Culture Shock affects the performance of international students either directly or indirectly, and most international students don’t know about this. For example, an international student can lock himself/herself in a his/her room the for whole day, not attending classes, doing nothing just looking out of the window or thinking about home. But finally they start using this time effectively and wisely, revising what they have studied, completing assignments and end up with better grades and results and meet deadlines.

Other international students can even lock themselves in Makarova 4 a room for the whole week, do nothing just think about home, read news on the internet about home or chat with families and friends back home through Skype, social networks such as Facebook and Twitter. Most of them don’t know to what extent Culture Shock has affected them. For example some students take medicine almost every day or visit hospitals regularly without knowing that Culture Shock is the cause and has highly affected them that’s why they are in a such condition.

No doubt, international students prepare for studying abroad for a long time, they dream of foreign universities and ready for Culture Shock beforehand. They study foreign language and country thoroughly because they are interested in it. They take a liking to the country where they are going to study, want to live and work there. Their pen-friends tell everything about customs, traditions and way of life of their country. Certain purposes of studying abroad are very important for these young people and students do their best to achieve them.

Besides, there are a lot of international students from other countries in universities who also go through Culture Shock and they constantly help each other. Students who live in this country and study at these universities are very tolerant and patient to foreign students because they need other experience and opinions. The same can be said about teachers, they are always ready to support foreign students. Universities themselves can provide accommodation and a place to work because they need bright students and are able to help them.

And of course, young boys and girls who live and study in foreign countries have constant support from home, often calls and messages from parents and friends. According to these facts, it can be said that most of the international students aren’t afraid of Culture Shock and handle it very easily. To sum up, international students are the most prepared for Culture Shock group of people, because studying abroad is their dream and goal. They want to enter foreign universities, they are eager to live overseas and Culture Shock are not able to prevent them from doing it.

But at the same time, they should remember that Culture Shock is entirely normal, usually unavoidable and not a sign that they have made a mistake or that they won’t manage. In fact there are very positive aspects of culture shock. The Makarova 5 experience can be a significant learning experience, making them more aware of aspects of their own culture as well as the new culture they have entered. It will give them valuable skills that will serve them in many ways now and in the future and which will be part of the benefit of an international education. Makarova 6 Works Cited Adler, P. 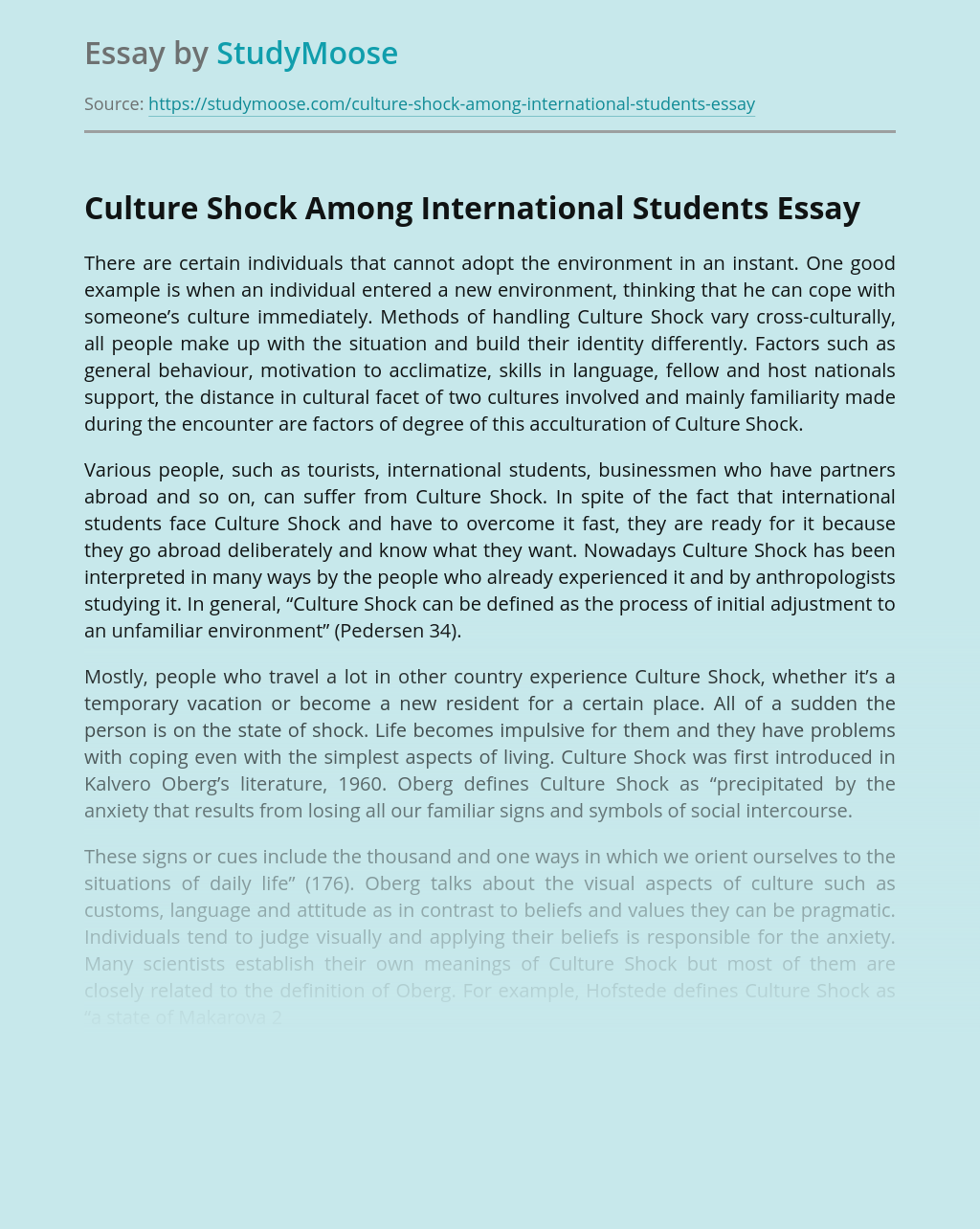 Turn in your highest-quality paper
Get a qualified writer to help you with
“ Culture Shock Among International Students ”
Get high-quality paper
Helping students since 2015
Stay Safe, Stay Original