The culture of ordinary people

Dominic Strinati criticizes the whole ‘mass culture theory’. He says that the theory gives ‘popular culture a homogeneous feel’, without taking into account all the varied subcultures around today. This comment slightly changes my whole view on mass culture being “babble”; you get varied subcultures in life, true. Mass culture is not homogeneous, true. However there is nothing here which is full proof to state that ordinary people are being debased by the mass culture. From this information found I began to widen my search by using the internet to see whether it could shed any light on my answer.

Don't use plagiarized sources. Get your custom essay on
“ The culture of ordinary people ”
Get custom paper
NEW! smart matching with writer

I found a website called www. springerlink. com which had an article called ‘Beyond mass culture’ by Eugene Lunn from the department of history from the university of California, USA. She claimed that ‘mass culture in this century, the post war era 1945-1960, is pivotal’. So basically the whole idea of a mass culture can change direction because of the mass media is constantly expanding, but especially when ‘discretionary income and leisure time were growing in welfare-state societies’ which created a post war shift in ‘cultural outlook and political valence that needs to be emphasized’.

This statement is not entirely true because nowadays people are spending their money on advertised products because they have an excess of disposable money that they feel they need to use. The media tells us what to spend our money on and how we should be, rather than how our parents socialised us. So in conclusion, after reading through my research and points, I believe that a mass culture can debase the culture of ordinary people to a certain extent, I believe that the mass media socialises the public to believe whatever they say, report or advertise.

They have control over the public; they create the concept of subcultures and a ‘mass culture’. Thanks to the media people’s idols are over night celebrities, not historic figures of the 20th century. Before the media took control of our lives, we had primary socialisation which we remembered and respected. People feel more respect for their peers in their subculture than their family. The public are being influenced to believe what the media want.

This doesn’t mean that primary socialisation is going to disappear, just the manners and what new parents believe will. The ‘ordinary culture’ of the 1950’s is dying out; their traditional view won’t be used because life as we know it is constantly changing, and after time so will our concepts and our actual outlook on life. Our society is soon going to become a mass society and then the mass media will have total control over us.

The culture of ordinary people. (2020, Jun 01). Retrieved from https://studymoose.com/culture-ordinary-people-4078-new-essay 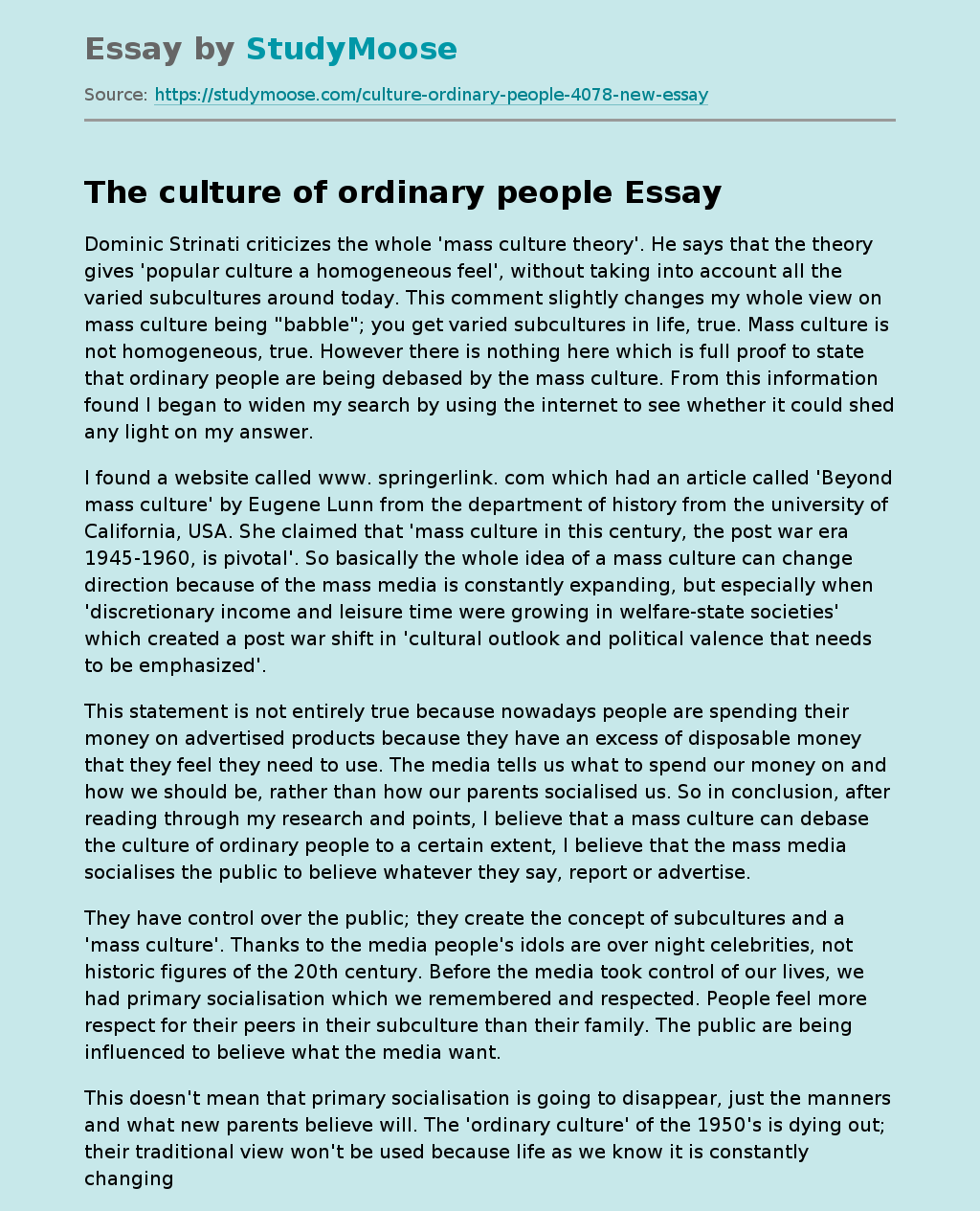