Culture and History of Spain

The golden age of Spain does not refer exactly to the economic and military hegemony of Spain, as Spain was on the verge of political, economic, and military collapse during this time. Spain engaged in expansionist policy abroad that had necessitated the government to impose an increased taxation, which leads to the revolts in 1640 first in Catalonia, then in Portugal. From then on, Spain was weakened economically, politically and culturally. Rather, the golden age refer to the flourishing in arts and literature in Spain.

Don't use plagiarized sources. Get your custom essay on
“ Culture and History of Spain ”
Get custom paper
NEW! smart matching with writer

The main topics during this period were literature and the arts rather than economic or military victories abroad. The period of the Spanish golden age according to John A. Crow and Patricia Craig as featured by AOL Hometown in their article “Spain’s Cultural life: Literature and the Fine Arts” was between 1530 and 1680. During this time, theatre works, poetry and novels were very popular, and the most well known was the work of Cervantes entitled Don Quixote published in 1605.

Among the most popular names were dramatists like Lope de Vega, Tirso de Molina, and Calderon, which had premiered fine works of Spanish theatre. Spanish Famous artist during this time includes Velasquez, El Greco, Zubaran, Rebera and Morales which were held to be the greatest of their times. The reason behind Spain’s golden age was perhaps the existence of these fine artists whose works captivated even the highest nobility. The golden age of Spain according to history (an article entitled “Spain”) began with the ascension of Philip II to the Spanish throne.

It was during his time that the popularity of arts and literature reached to highest level. However, the consequence of the golden age was the political and economic as well as military decline of Spain both in the home front and in overseas. An article entitled Spain in History (iExplore) pointed out that because of the prominence of art, the Hapsburg monarchy became increasingly less able to deal the empire’s somber problems particularly during the 17th century causing the empire’s gradual economic collapse.

Most historians attributed this economic failure to the inability of the monarch to rule the empire because their interest was in the arts rather than in improving the economy. Another consequence of the golden age is the ‘feminization of Spain. Feminization refers to the gender emphasis that proliferated in the Spanish societies during the golden age. Men during this time adopted the customs of women such as mode of dressing and cosmetics.

In the summary of Sidney Donnell’s book Feminizing the Enemy featured in the website article LAFAYETE the article pointed out that the gender anxieties during the golden age was related to the emphasis on arts and culture that was prevailing during this period of Spanish history. The Role of Religion in the Rules of the Hapsburg (or Habsburg) Kings During the period of 16th and 17th centuries, Spain was under the rule of the Habsburg dynasty, which was the dominant power in the Central Europe with capital in Vienna, Austria.

Spain then was ruled by many kings that brought Spain both success and fall; and that, the “church enlarged its already dominant position in Spanish life” (High Beam Encyclopedia, par. 27). The Obvious topic during this time was Catholic Faith and Church membership as the reigning Monarchs were committed to impose Catholicism through the empire. The role of religion in the rules of Hapsburg kings according to Victor Perez Diaz (1998) was that the Hapsburg viewed society in the context of teleocratic state, which put society in a secondary position.

It means that in view of the Hapsburg Kings, society can be a sphere in which they can generate resources to be use by the ruler to accomplish its mission. The implication of this was that the Hapsburg Kings uses religion or the so- called politics of faith to fulfill their mission. In other words, religion has become a powerful apparatus with which they achieved their aims. According to Diaz, although the Hapsburg kings respected the socioeconomic order, yet they were also devoted to some shared goals that necessitate systematic interventions in the social fabric to reinforce the sovereign’s authority.

Thus the Hapsburg, Diaz pointed out, marshaled resources for protecting Catholic faith and shaped the moral character of its subjects, making membership in the church the means to recognition in the political community (Diaz). The reason for this was, the Roman Catholicism became the official state religion in Spain in 1492 after Ferdinand V of Aragon, and Isabella I of Castile married which linked the kingdoms. Because both monarchs were devout Catholics they wanted to impose the purity of the Catholic faith as well as to enhance the royal power.

Because of the close relations of the Hapsburg to the Holy Roman Empire they were so dedicated to the Catholic Church prompting them to establish the Inquisitor in order to prosecute, and confiscate property owned by the Moors (Spain Life and Culture). Ferdinand and Isabella imposed religious uniformity through out Spain by aggressive campaign to convert the Moors and the Jews or they face expulsion (Spain Life and Culture). However, the consequence of their emphasis in the purity of Catholic faith, leads to the persecutions of Protestants, which resulted to war with protestant England.

This prompted Philip to send a great Spanish Armada against England in 1558 unfortunately, it was defeated, and it marked Spain’s decline of power (Spain). Thus the consequence of the Hapsburg use of religion to enhance their power and to strengthen their rule was costly and it cost the gradual collapse of the Spanish hegemony not only in the home front but also abroad. The Bourbon kings in Spain (efforts to improve Spain) The Spanish Bourbon was one of the most vital royal families in Europe that held thrones in Spain during the 17th century.

Philip V of Spain became the first Bourbon ruler of Spain after the death of Charles II (1665-1700). The bourbons ascended to the Spanish thrones during the end of Spain’s hegemonic power with the death of Charles II. In the view of J. Clayborn Laforce, with distressing vulnerability Spain slipped into an embarrassing sequence of decline, which continued until all of Spain’s greatness was gone. However, with the ascension of Philip V, Spain crossed a new threshold marked by the extraordinary progressive participation by government in Spanish economic dealings.

The main topic during the Bourbon’s rule was economic recovery, in which the Bourbon monarch had implemented series of economic measures designed to improve the economic condition of Spain. Obviously a learned man, Philip’s knowledge in French mercantilism had helped him in improving the economic condition of Spain. Philip launched a series reform policy and programs for commercial and industrial revival and promotes the production of merchandise of high value that previously had been purchased abroad.

The next Bourbon king to inherit the Spanish throne was Charles VII (1759-88) Like Philip; Charles was one of the most enlightened Spanish Monarch, which had contributed to Spain’s short-lived cultural and economic revival. The reason behind all these efforts was that through production of these commodities, the government would minimize its dependency on imported commodities. The third Bourbon Monarch to rule Spain was Ferdinand VII (1784-1833) which perhaps marked the end of the short economic revival started by Philip V and continued by Charles VII.

It was during the brief reign of Charles IV, an incompetent Bourbon monarch that the flame of economic revival dies down. The reason for the short live economic revival was the squabble in the royal family that prompted Napoleon of France to invade Spain, and gave the Spanish throne to his brother Joseph Bonaparte. Spain after this was engaged in wars that halted its economic hope of revival. The consequences of disunity in the royal family had not only weakened the economic reforms put in place by Philip V but it also invited napoleon to invade Spain and claimed the Spanish throne for himself.

It also led to war against England that further pushed Spain to humiliation and defeat. Indeed the misery of Spain cannot be attributed to the Bourbon rule as they merely inherited a declining kingdom. Had the momentum of economic growth that was laid out by the first two-bourbon monarch, Spain could have recovered from its drooping. Spain’s history was indeed very intriguing and full of difficulties, which are a good source of both learning and inspirations for the student of Spanish history.

Culture and History of Spain. (2016, Sep 01). Retrieved from https://studymoose.com/culture-and-history-of-spain-essay 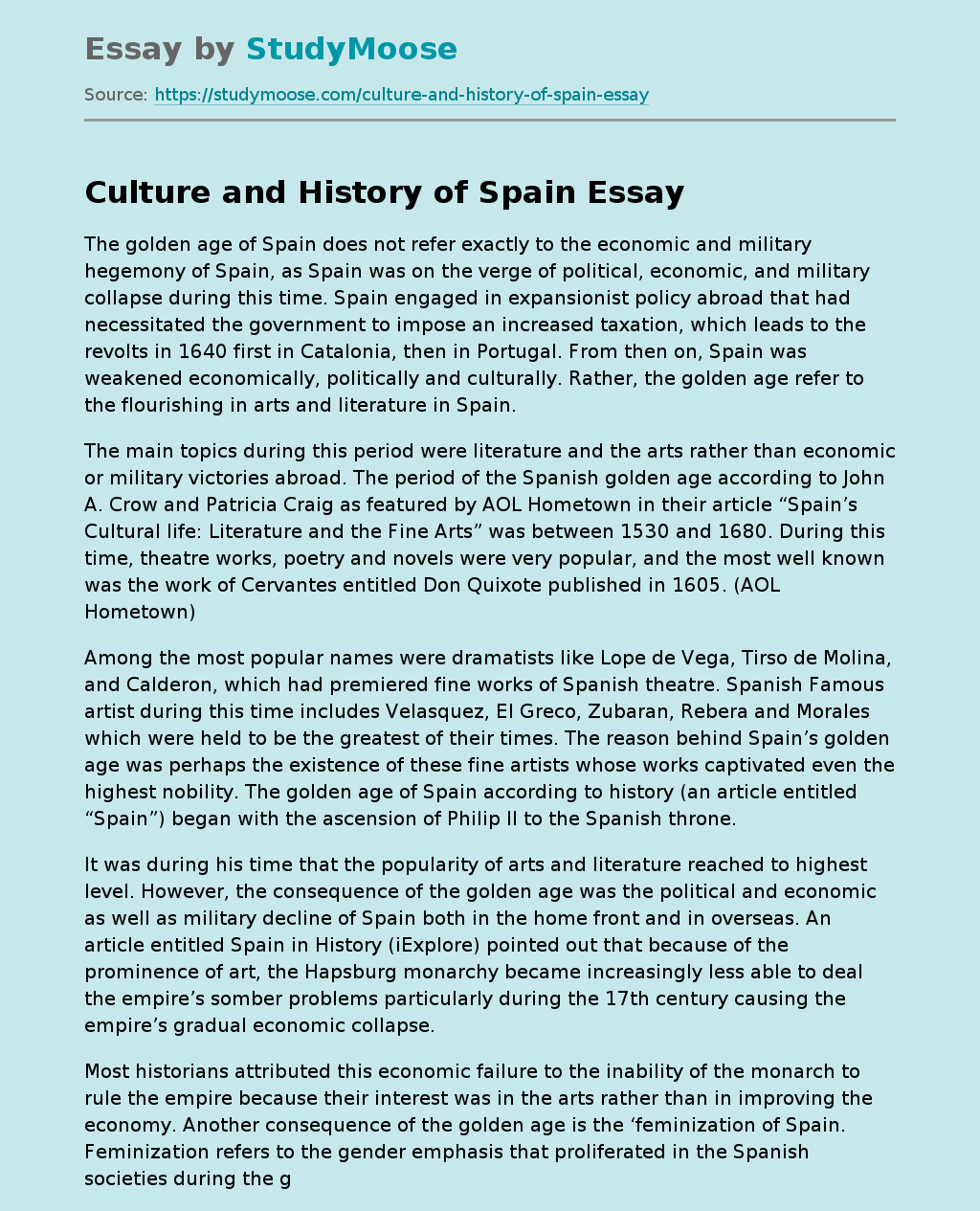