When dealing with issues that pertain to people’s beliefs and faith, one has to tread with caution. Although there is religious liberty, one has to be careful about religious issues when it comes to public places. For one, I believe that religion is a personal thing and restrain should be put on it when we come to a place where other people that are not of the same religious belief are. Not that we are not at liberty to display our faith but the truth is that as we have right so do other people have rights too and our own faith should not overshadow theirs.

Don't use plagiarized sources.
Get Your Custom Essay on Culture and Education Just from $13,9/Page

However, there are some instances where we might be in a dilemma of what to do.

The case provided is a good example of this scenario. Without recourse to emotions or sentiments, I think the board made a right decision which has been long overdue. However, as expected, some people will rebuff this decision because of some rather emotional or sentimental reasons.

Their argument will be will not be objective but their rebuttal of the board’s decision will be patterned after the following argument. The position of the parents who rebuffed the decision of the board will be grounded on the fact that the late principal deserves some respect because he has toiled in that school.

These parents will consider the action made by the board as disrespectful to the late principal and thus will call for the reversal. Apart from this, they might argue that the portrait has been an integral part of the school tradition and that they consider the idea of just waking up one day and deciding to remove what has been a part of the school life and tradition rather absurd. “What do you want the poor boy that painted the portrait to feel? Imagine the number of hours the poor boy spent in painting that portrait. ”

Furthermore, these parents may argue that since no one is complaining about the portrait, the portrait is not affecting the board. “Is it disturbing you or is it hindering the discharge of your duties? ” Question 2: A. Linda Mealey argued in her paper titled “Bulking up: the roles of sex and sexual orientation on attempts to manipulate physical attractiveness” that “Socialization processes can either reduce or enhance biological differences between individuals or groups” Sex role socialization and sexual orientation has led to stereotypes.

The more people are aware of their sexual orientation, the more they come to be identified with the general preconceived ideas about the sex. For example, if a lady believes in a stereotype about women generally, she comes to see herself from the point of view of this stereotype and this will make her naturally identify with people that fall under the same sexual orientation. Although, stereotypes might sometimes lead to discrimination of a sex, the truth is that it allows people that fall under the same sex to identify with each others as it serves as a unifying platform.

B. There are some school roles that reinforce sex role stereotypes for girls. An example of this is the fact that the position of cheerleaders in the school football teams. This reinforces sex role stereotypes for the girls because they are made to feel that they can not meet up with the challenges that men do. Another example is that in some schools, the positions of vice-presidents of organizations are reserved for ladies.

This also reinforces sex role stereotypes that men are leaders and women should support them in whatever they do. Although these school roles might not be directly intended to reinforce sex role stereotypes, the truth is that they do. Reference: Mealey, L. “Bulking up: the roles of sex and sexual orientation on attempts to manipulate physical attractiveness” (1997) Retrieved on April 28, 2008 from http://findarticles. com/p/articles/mi_m2372/is_n2_v34/ai_19551975 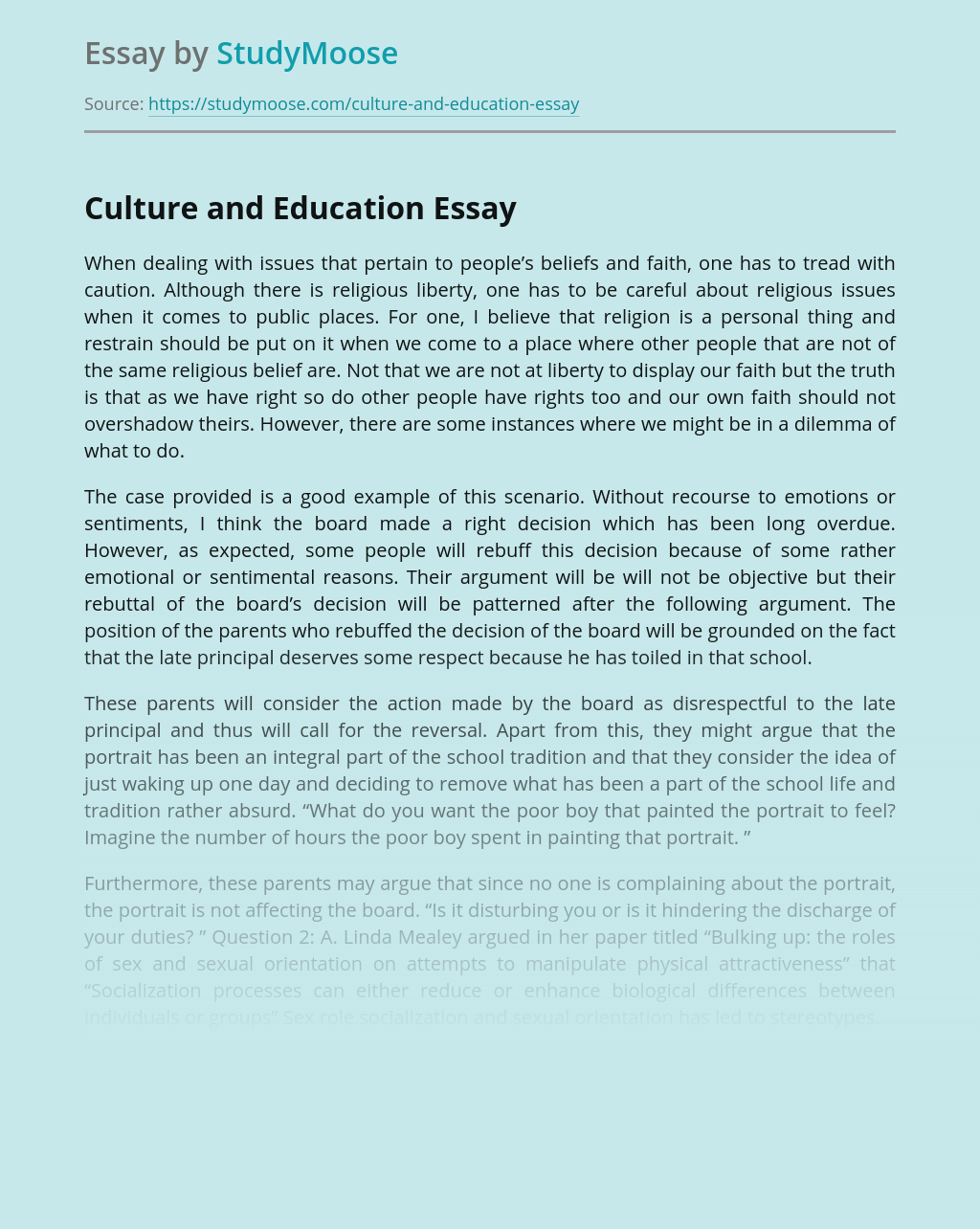 1: Educating workers around the world: Due to globalization, managers and employees of hospitality industry are able to learn about the different cultures, people, religions and other different prospects of life. Globalization also helps them to understand what importance of humanity is. Racism is still a part of some people but due to globalization it... VIEW ESSAY

When I think of pop culture I think of music. There is so much music out in the world today. Many people are influenced by music they listen to. Mostly because they want to copy their favorite artist or because they feel that’s a way of expressing themselves and fitting in with the people that... VIEW ESSAY

The most important factor in any planning for India’s development and economic uplift is that of turning a hungry, discontented people into a happy, well-fed one. Food can be had either by import or by production at home. India must produce her own food. The problem, therefore, reduces itself to one of agricultural improvement. We... VIEW ESSAY

View sample
The Importance and Benefits of Diversity

Cultural diversity, or multiculturalism, is based on the idea that cultural identities should not be discarded or ignored, but rather maintained and valued. The foundation of this belief is that every culture and race has made a substantial contribution to American history. However, many people remain opposed to the idea of multiculturalism, or cultural diversity... VIEW ESSAY

View sample
Effects of Globalization Towards Our Culture

This article focuses on the globalization of culture and the role of media in the ensuing identity crisis (both individual and social) resulting from this process. The article tries to display the basic concept of the process of globalization with all of its effects, threats, challenges，and opportunities and will illustrate its interaction with the media... VIEW ESSAY