The ADDRESSING GSA Self-Assessment is a model for recognizing cultural characteristics. It focuses on how each characteristic is on a scale of dominant to non-dominant, dependent upon one’s environment. Whether a certain characteristic is dominant or non-dominant varies at different locations. The model addresses 12 cultural characteristics, including age and generational differences, development or other disability, religion and spiritual orientation, ethnic and racial identity, social class, sexual orientation, indigenous background, national origin, gender identity, gender expression, size, and assigned sex at birth (Hays, 2016).

Don't use plagiarized sources. Get your custom essay on
“ Cultural, Racial & Religion Identity Development and Self Awareness ”
Get custom paper
NEW! smart matching with writer

To become a culturally competent counselor, it is important to be self-aware of biases and to recognize the areas where I am a member of the dominant group (Hays, 2016). The groups that I identify with that are considered part of more privileged groups in the society I live in are age, developmental or other disabilities, religion, ethnic and racial identity, socioeconomic status, sexual orientation, national origin, and size. Regarding age, I am thirty years old, considered a young adult.

I am technically a millennial because I was born in 1989, but I am in the older group of millennials and I don’t necessarily identify as one. In the United States, children and older adults are considered non-dominant because they do not have the same privileges that young and middle-age adults have (Hays, 2016).

The next privileged group I am a part of is developmental or other disabilities. I am able bodied and have no physical or learning disabilities. This is one group that I did struggle to decide which group I belong in.

Though I don’t have any physical disabilities, I have struggled with anxiety and depression throughout my life, but it is not something that I consider to be a “disability” in my life.

Religion is another dominant group that I identify with. I identify is a Christian, specifically Baptist. I was raised in a southern Baptist church; however, I identify as more Nondenominational now. I believe that my values, beliefs, and goals in life were shaped by my religious upbringing. I am also Caucasian; I grew up middle class and currently consider myself to be middle class, and I identify as a heterosexual female. Heterosexual European Americans, upper- and middle-class people, and people who identify with the Christian religion are all considered the more privileged/dominant groups in the United States and Texas, where I grew up and still live. Lastly, size is another dominant group that I belong to. Having more body fat is considered nondominant. I am an average sized person, not under or overweight.

The different dominant and nondominant parts of my identity impact my worldview because my worldview is made up, in part, due to my cultural influences, values, and beliefs. As I mentioned, I was raised in a small town in Texas. I grew up in a Christian home; we were middle class southern Baptists. Being a female, being white, and being heterosexual all have an impact on my worldview. That is why it is important as a counselor to be familiar with cultures that are different from my own, and to be self-aware of any bias that I have.

Racial identity developmental theories are influenced by the maturation of cognitive and psychological processes internal to the person and by the person’s context sociocultural group dynamics (Quintanta & Montero, 2006). During early childhood, children’s understanding of their world is based on their observation of physical features associated with race, including skin color, facial features, and hair texture. In middle childhood, children acquire racial constancy. They understand that their racial status remains constant despite superficial changes in appearance.

Youth begin to develop a social perspective on their racial identity during Preadolescence. Children can view themselves through the eyes of others during this period (Quintana & Montero, 2006). It is during adolescence that dramatic changes in racial identity development occur. Ethnic or racial group consciousness develops. This consciousness involves a merge between personal and racial identity and the sense of self is connected to the person’s racial group. (Quintana & Montero, 2006).

The racial/ethnic identity model that I applied to myself is the White Racial Identity model. This model discusses individual psychological development in a racialized society (Leach, 2006). White racial identity models were created based on Black racial identity models and they had similar stages that white people may go through to reach a nonracist identity. In this model, Caucasians are familiar with their whiteness and move through stages from being oblivious to racial issues to accepting other racial groups (Leach, 2006). There are six stages in the White Racial Identity model. In first stage, Contact, the individual is colorblind, oblivious to racism and oppression and they like the racial status quo. (Leach, 2006). They see racial differences, but don’t think that they are important. The next stage, Disintegration, comes when an individual is exposed to or experiences the privileges of being White.

There is racial anxiety and ambivalence in this stage and individuals must deal with moral dilemmas about racial issues and has to choose between either becoming involved with other individuals from different racial and ethnic identities or maintain the status quo (Leach, 2006). One example of my own development in this stage would be when I started school. I had never really been around anyone else from another race before I went to school. I remember asking my parents about the other kids that looked different than me. My parents then explained to me that there are kids too, just like me and that they shouldn’t be treated any differently. I chose to become friends with other children of all races in my class. The third stage, Reintegration, is identified by the “blame-the-victim” attitude and idealization of the White race and denigration of other races (Leach, 2006). In this stage, Caucasians may feel that even though there is White privilege, it is because they deserve it and are in some way superior to other racial groups. The next stage, Pseudo-independence, is the first stage of positive racial identification. Acceptance of other racial groups occurs during this stage, but full acceptance is not yet achieved (Leach, 2006).

To move into the next stage, Immersion/Emmersion, an individual makes a genuine attempt to connect to his or her White identity. They also begin to consider the benefits they have received as a result of being White. There is also an understanding of their role in our racist society (Leach, 2006). I went through this stage when I went to college and started living on my own. The sixth and final stage, Autonomy, is achieved when an individual has a positive view of Caucasians, but also understands the realities of minority social groups, racism, and oppression; and they see the racial world from a different perspective (Leach, 2006).

The cultural identity model I applied to myself is Fowler’s Theory of Faith Development, which is measured using the Faith Development Interview (FDI) (Parker, 2006). Fowler proposed seven stages of faith that an individual goes through on their path to making sense and relating to one’s “ultimate environment.” Progressing to the next stage involves movement toward greater complexity in the structural aspects, which are form of logic, perspective taking, form of moral judgment, bounds of social awareness, locus of authority, form of world coherence, and symbolic function (Parker, 2006.)

In the first stage of Fowler’s Theory of Faith Development, Primal Faith, is technically a pre-stage. It is the interaction between an infant and the primary caregiver during the first year of life providing a foundation for faith by basic trust vs. mistrust. The next stage, Intuitive-Projective Faith, begins when the child starts talking. It is characterized by the wild imagination of the child. In this stage, God is a powerful part of the imagination, similar to Santa Claus (Parker, 2006.)

The third stage, Mythic-Literal Faith, children acquire concrete-operational thought and have a new way of seeing the world; justice is real and reciprocal. The new way of seeing gives rise to a faith in a God who guarantees a reciprocal fairness (Parker, 2006). One specific example from my life that comes to mind about this stage is asking my dad questions about God. I remember a lot of Sunday evenings asking my dad questions about things that I learned in Sunday school that I didn’t understand or that didn’t make sense to me. In doing this, it helped me to learn the concept of faith and believing in something that you can’t necessarily see.

In the fourth stage, Synthetic-Conventional Faith, meaning-making and committing to values takes on a more interpersonal dimension. God takes on the qualities of a good friend in this stage. The fifth stage, Individuative-Reflective Faith, is characterized by reflection on one’s faith. This reflection requires that inconsistencies in behavior and values must be stopped (Parker, 2006). I feel that in my life, I went through this stage when I got baptized around the age of 12. Being baptized is a public profession of faith that is supposed to portray your seriousness of your relationship with God and your wants to live the way in a way that serves Him. The next stage, Conjunctive Faith, brings the acknowledgement that consistencies of one’s reflective faith have come with a price. God is seen as mystery and paradox in this stage. Finally, the last stage, Universalizing Faith, seeks inclusiveness while still maintaining clear commitments to values of universal justice and love (Parker, 2006).

I have learned a lot about myself by applying these cultural identity models to myself. I don’t think a lot about all of the privileged groups that I belong to, and I was honestly surprised by how many I am a part of after writing this paper. I enjoyed these self-assessments and models and I want to continue to be self-aware of my own self, culture and bias so that I can be an effective counselor to people of all cultures. 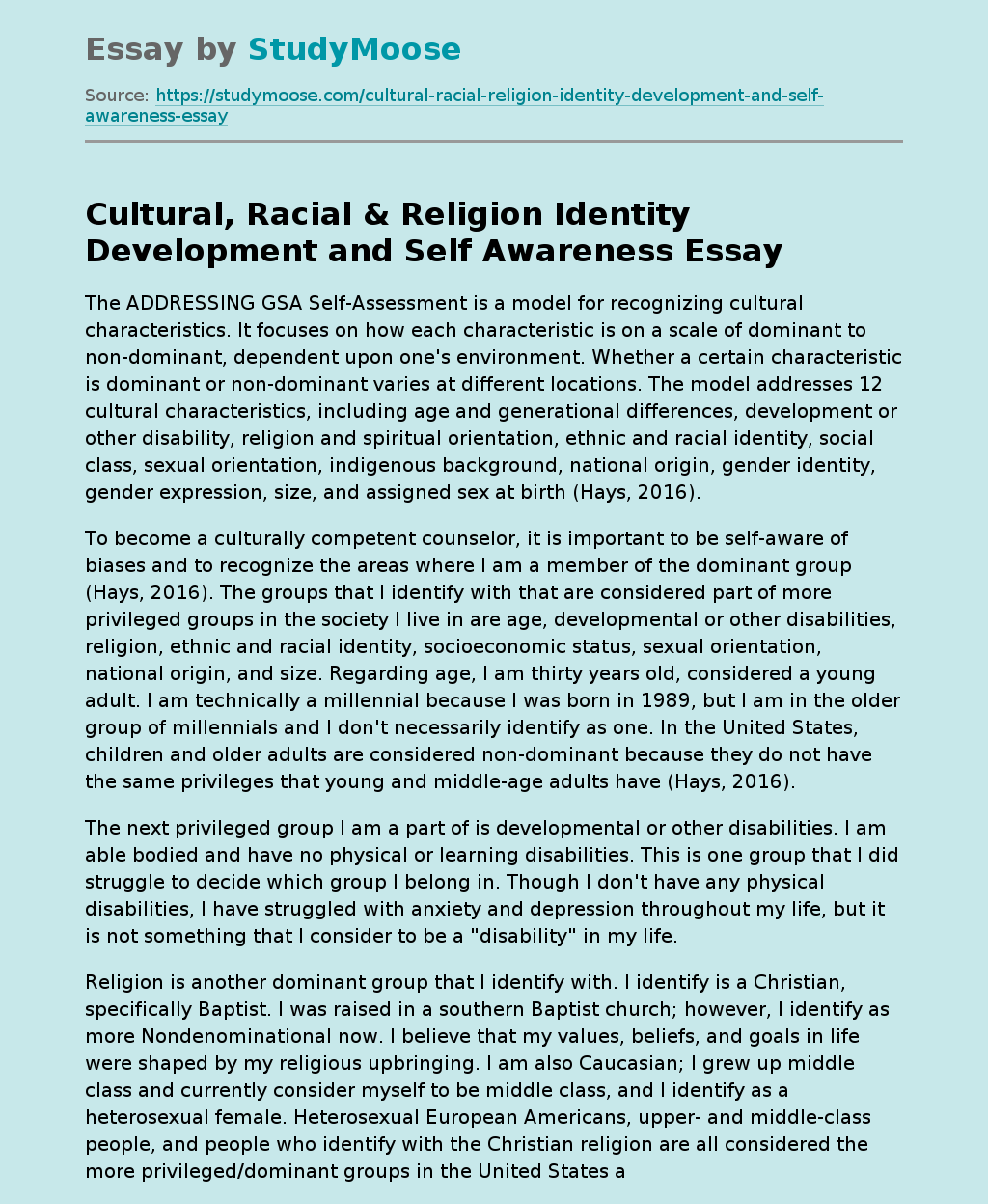