The debate is led by anti-vaccinators who oppose vaccinations on ethical, political, religious and medical safety grounds. On the other hand, pro-vaccinators argue that the health benefits of vaccines outweigh the very few adverse effects that they have, and that vaccines have been largely advantageous to public health.

Pro-vaccinators (usually health care specialists, microbiologists, governments, pharmaceutical companies) Vaccinations are an effective and cost-saving tool for disease prevention. Positive externality attached to the use of vaccinations – overall public health is positively affected Side-effects are infrequent and the most common ones are minor.

Don't use plagiarized sources. Get your custom essay on
“ Cultural Perspectives On Vaccination ”
Get custom paper
NEW! smart matching with writer

Anti-vaccinators (some conservative Islamic and Christian groups, usually libertarians and victims of public panic) Vaccines are ineffective and are used to generate profits for Big Pharma. Mandatory vaccinations interfere with individual and religious freedoms. Vaccines have severe side-effects and can trigger brain disorders.

Points in favor of vaccines

The effectiveness of vaccines has been globally verified. Scientific research confirms the efficiency of all vaccines administered to the public, including the vaccines for measles1, influenza2 and pneumococcal disease3, 4.

Vaccines led to the eradication of small pox6.

Global reduction of polio (number of cases has shrunk by over 99% since 1988)7, measles (deaths have reduced by 78%)8, tetanus (92% reduction in global cases since 1980s)9 Most side effects caused by vaccines are minor, such as low-grade fever10. In the US, vaccines are introduced to the public after years of thorough testing and are monitored closely after10.

Points against vaccines and rebuttals

Vaccines are a ploy by Big Pharma to generate profits by marketing needless vaccines.

All companies are motivated by profits, including McDonalds and Apple Inc. Pharmaceutical companies are encouraged by public authorities toward the production of vaccines due to the resultant overall public health savings, despite the following: Medicines for chronic diseases are more profitable.

Although the vaccine industry has grown multifold over the past years and is generally profitable, pharmaceutical companies should not be blamed for misdirection when the health advantages of vaccines have been verified by academia and are widely acknowledged. Exemptions on religious and philosophical basis should be permitted. The religious and philosophical views of a group can be overlooked to protect the health of an entire population, since unvaccinated people create a level of risk for themselves and for the rest of the population12. The Netherlands is at risk of a measles outbreak in the orthodox Protestant group, and the consequent transmission of measles to the general population, as shown by a recent study13. Mandatory vaccines infringe upon individual freedoms.

Vaccines directly affect the well-being of the people around, and are thus, not as private a decision as one would assume. Positive externalities are usually ignored by people while making decisions. Some people claim that taxes are unconstitutional. But taxes, like vaccines, are a mutual responsibility and work for the common good. Vaccinations lead to life-threatening side effects.

The most common side effects of vaccinations are minor, like low-grade fever or soreness near the injection site10. Scientific research has disproved the popular claims that vaccines cause SIDS14 or brain disorders like autism15, 16. The chances of complications from diseases are much higher than the chances of complications from vaccines. Thimerosal, a preservative used in vaccines, and the MMR vaccine cause autism. Research shows no cause-and-effect relationship between autism and thimerosal17, or autism and the usage of MMR vaccine15, 16. The usage of thimerosal has only minor side-effects, like swelling near the injection site18, and the most common side effect due to the administration of the MMR vaccine is low-grade fever10. Thimerosal was taken out of vaccines for children in 2001 only as a preemptive measure. Even then, autism rates have only grown18.

Nearly all scientists whose researches concluded a positive correlation between vaccines and autism retracted their researches. Vaccines must be repeated and do not provide long-lasting protection. One size neither fits all humans nor all diseases.

MMR vaccination does, in most cases, provide life-long protection. Other viruses mutate fast and immunizations must be renewed to fight the virus. Repetitive vaccinations are a small cost to pay in the face of deadly diseases. Even vaccinated children might contract diseases.

Vaccinations are 90-99% effective in preventing diseases among children19. These diseases generally manifest with milder symptoms and less severe complications. Some children do not respond to vaccines and some are not immunized due to compromised immune systems or allergies. Herd immunity must be achieved in order to protect the unimmunized population. Whooping cough epidemic despite the availability of vaccinations Effectiveness of vaccine relies on herd immunity

Vaccination rates have been dropping due to anti-vaccination movements and the subsequent public panic. Exemptions against vaccines have doubled since 199720. States which make exemptions easily available to parents have more cases21. Most cases of whooping cough are among infants too young to be vaccinated. Highly-publicized cases of brain damage alleged to have been caused by the whooping cough vaccine created public panic in Great Britain which caused a drop in immunization rates and thus, epidemics of the disease22, 23. Most complications reported were not associated with the vaccination22. Better hygiene and sanitation in the recent years is the reason for the falling rates of diseases. Better hygiene does prevent the spread of diseases.

However, disease-causing germs stick around, sometimes in our bodies. They can also be spread by means such as sexual contact or sneezing, and vaccinations teach our bodies how to fight diseases once the germs attack our bodies. Measles, like other diseases, saw a permanent drop in 1962, after its vaccine was licensed24. Evidently, vaccines have a direct impact on disease control. The cases of haemophilus influenzae in children started declining a few years ago, since the introduction of the vaccine for children, while the levels of sanitation and hygiene have been practically unchanged since 199023. The number of global cases for vaccine-preventable diseases has been dwindling as the vaccinated population has been growing. India is polio-free now due to country-wide vaccination efforts (in modern times) to eradicate the disease25. Some doctors and scientists stand against vaccination.

A vast majority of doctors, including medical experts at CDC, WHO as well as non-governmental organizations like the Bill and Melinda Gates Foundation, support the administration of vaccines. It is important to consider the religious and philosophical views of these doctors. Sometimes, financial gains might be involved26.

Cultural Perspectives On Vaccination. (2021, May 23). Retrieved from http://studymoose.com/cultural-perspectives-on-vaccination-essay 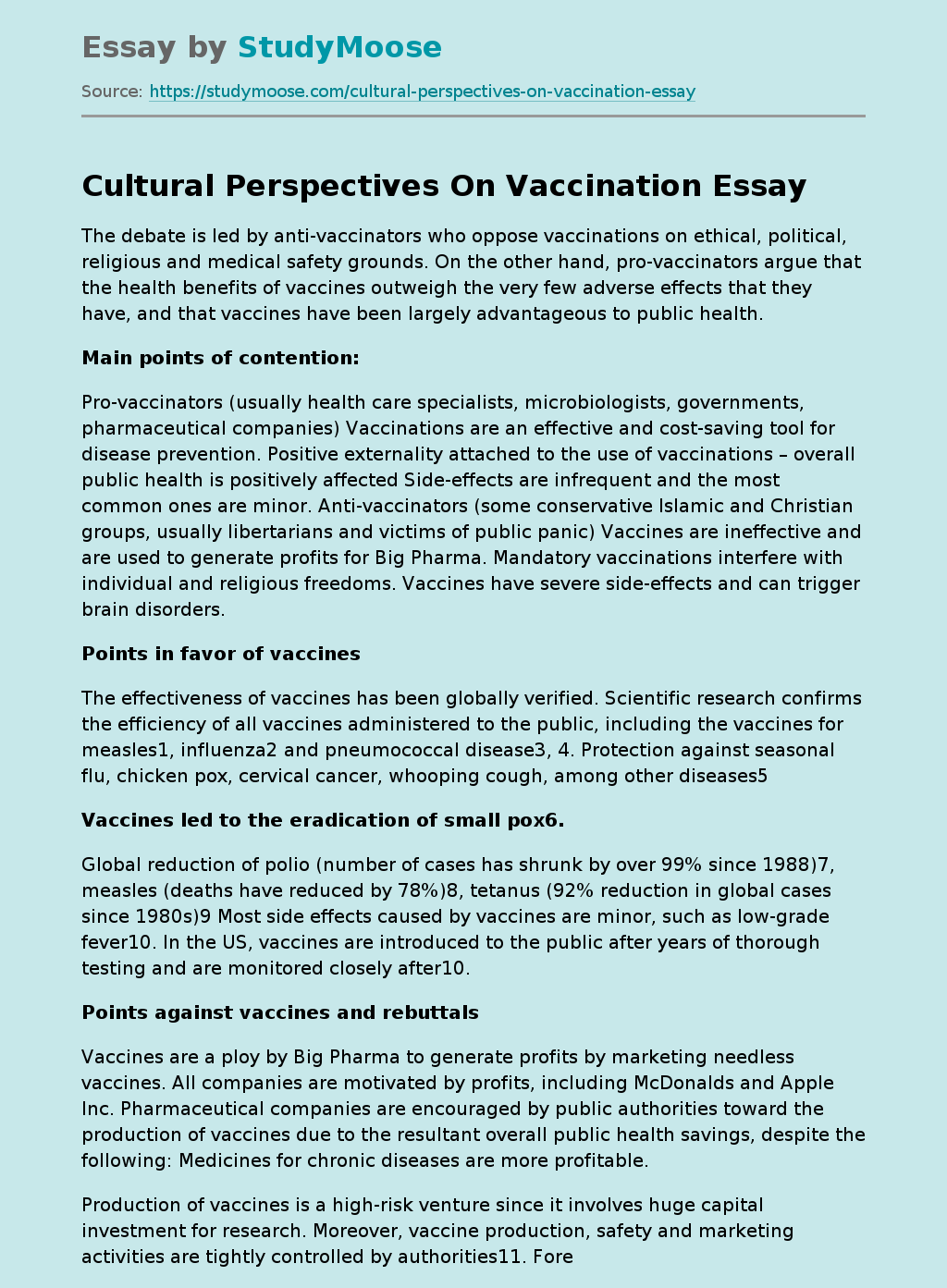