Society comes from the French word “société” and the Latin word “societas” which mean fellowship and companionship respectively. Other popular definitions of society are; a group of people living together because of their same interests and ways of living. All countries of the world have their own set of societies that varies depending on its citizens preferred ways of living. Societies are defined by historical events, norms and the cultures that the specific society has become accustomed to.

The most influential aspect of a certain civilization to a society is its culture.

Don't use plagiarized sources.
Get Your Custom Essay on Cultural Norms Just from $13,9/Page

The word ‘culture’ has many meanings. It could mean the way of living of certain societies or the cultivation of plants and other things that could be cultivated.  Culture is one of the strong driving points of a society because, from its definitions, it is the collection of traits that define the people of a society and even a whole civilization.  It is the collection of traits that has been acquired by people from different experiences and events that have happened in their and other people’s lives.

Culture greatly defines the kinds of societies.  But, culture is broad.  It consists of several other ‘traits’ that give it definition.  One of which is ‘norms’.

Norms are the practices that people in societies call normal.  If having unlimited children in a society is a norm, then having unlimited children is normal. Thus, if you have no children or refuse to have more than what you already have, in that society, you would be considered abnormal.  If norms are what define cultures and cultures are what define societies and civilizations as a whole, by deductive reasoning, the norms are what support the societies.

Different countries have different cultures.  This is because different countries are composed of multitudes of different norms.  Norms are commonly established when a majority of the society’s population practice a particular or common habit of living.  Other justifications are when the leader of that society orders its subordinates or people to follow his rules thus making his preferences norms.

Norms and cultures have broad meanings that are difficult and complex to explain.  To help explain these ideas, use of examples would be most appropriate.  A particularly good example that can help explain the function of ‘norms’ in defining a culture is the general differentiation of the East from the West.

The people of the Orient consider living with nature while practicing art in forms of sculpture, pottery, painting, and writing poems as the general norm.  On the other hand, the West considers building and using machines and other inventions in making discovery, art, and everyday living more bearable and easier for its people.  The Orient used herbs and natural oils in curing their sicknesses and relied on priests to make the sicknesses go away.  In the West, discovery of medicines and other man-made products that help make the common people healthy is the norm for medicines.

I am an American citizen.  Living in America has taught me to be self-confident and judgmental at times but I understand that today, skin color, artistic preferences, and religion are more similar in every culture than different and I believe that to close the gap between the culture disparities of different nations, understanding of other cultures must be exercised before making judgments.

Swindler, A. (n.d). Culture in Action: Symbols and Strategies. Retrieved September 18, 2007 from http://www.asanet.org/galleries/default-file/Unit3.pdf 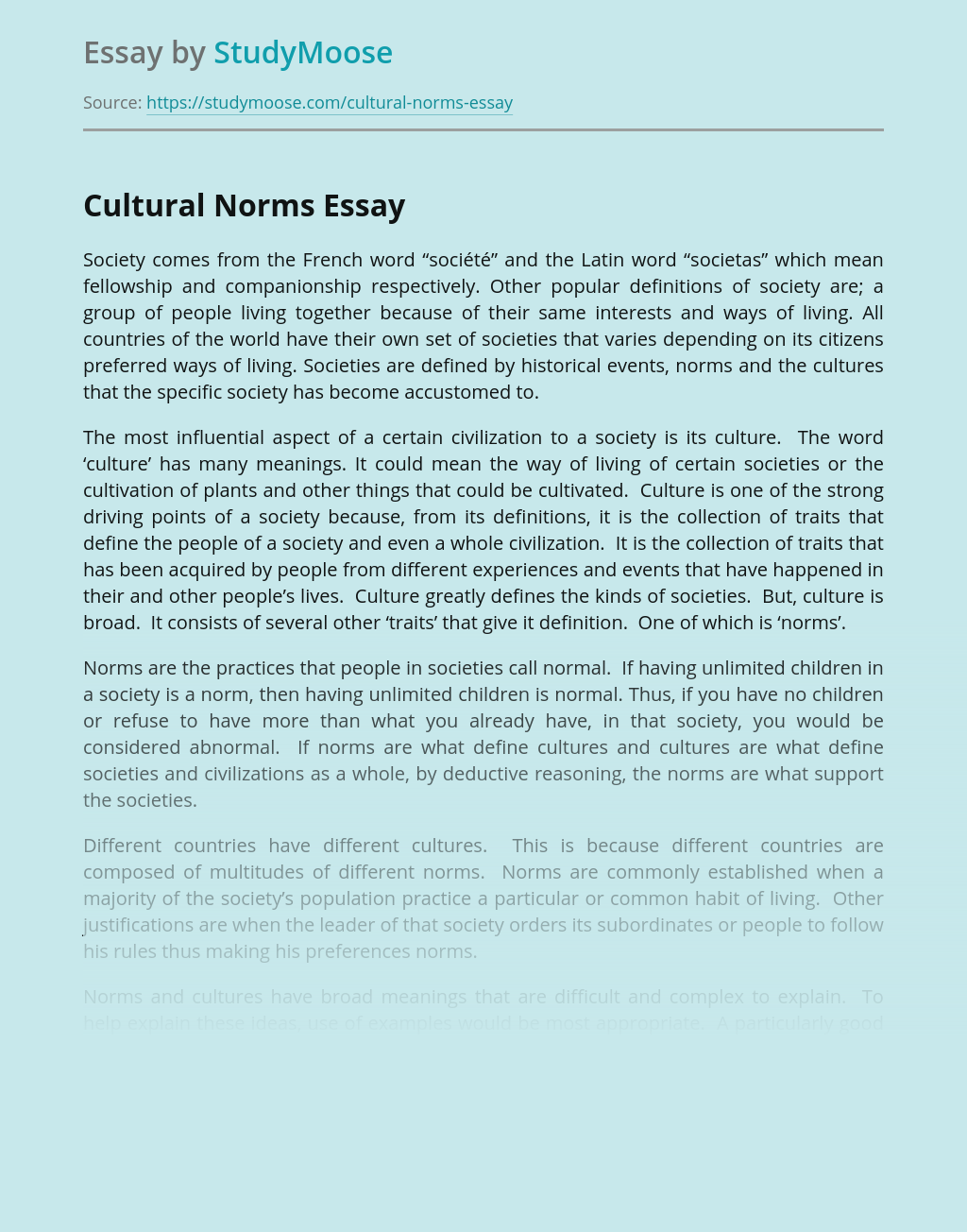 Critically examine the architecture, routines, and culture (ARC) framework of organisational design as proposed by Saloner, Shepard and Podolny in Strategic Management

The design of an organisation is highly crucial for a firm in today’s world in order for it to achieve and sustain its competitive advantage that will place the firm in a stronger position than its rivals. The firm can manipulate the components of organisation design, fit these elements with one another and with the...

Since long ago, agriculture has been associated with the production of basic food crops. At present agriculture, besides farming includes forestry, fruit cultivation, dairy, poultry, mushroom, bee keeping, arbitrary, etc. Today, marketing, processing, distribution of agricultural products etc. are all accepted as a part of modern agriculture. Agriculture plays a crucial role in the life...

Cultural relativism is the view that all beliefs, customs, and ethics are relative to the individual within his own social context. In other words, “right” and “wrong” are culture-specific; what is considered moral in one society may be considered immoral in another, and, since no universal standard of morality exists, no one has the right...

In Deborah Tannen’s article “The Argument Culture,” she states that argument and debate “urge us to approach the world, and the people in it, in an adversarial frame of mine.” She calls this new norm of society “The argument culture”. The argument culture “rests on the assumption that opposition is the best way to get...

Culture and cultural objects influence every aspect of our daily lives. In fact, cultures can be “understood as systems of symbols and meanings that even their creators contest, that lack fixed boundaries, that are constantly in flux, and that interact and compete with one another. ” (Vaughn and Rotney, 2006) A very important aspect of...