The culture of the Philippines is very diverse. This is due to the colorful combination of different nations with our country. Its culture is reflected by the complexity of the history of the Philippines through the blending of Pre-Hispanic indigenous Austronesian civilizations. There are a number of countries that have influenced Philippine culture such as Spain, United States, China, India, and the Arabs. The influences of these countries are visible in the various practices of the Filipinos up to the present.

Don't use plagiarized sources. Get your custom essay on
“ Cultural Evolution of Early Filipinos ”
Get custom paper
NEW! smart matching with writer

The Spaniards brought the Spanish language, Catholicism and other religious celebrations such as fiestas. The American influence is evident in the use of the English language and the presence of contemporary pop culture such as fast-food, music, movies, basketball and media. The Arabs and Indians brought Islam to the southernmost island of the Philippines along with their own customs and traditions. The Chinese brought trade and commerce to the country as well as their affirmation of the importance of respect and family.

May have followed herds of wild animals across these land bridges to the Islands. Some of these early migration were made by the ancestors of the present-day people of the Aeta and Agta tribes. Some western historians assume that the aborigines of the philipines were the Autralo-melanesian people who are distinctively small with dark skin and curly brown hair.

They were the ancestors of the people know today as Negritos or Aetas. The Mainland Origin Hypothesis by Peter Bellwood of the Australian National University and K.C. Chang of Harvard University maintains that the early inhabitants originated from South China and Taiwan. The other hypothesis, the Island Origin Hypothesis, believes that the prehistoric people originated and dispersed from an island in Southeast Asia. Historians presuppose that between 300 and 200 B.C. , inhabitants of Malay-Polynesians descent settled in the Philippine archipelago.There were 30-100 families in a society know as barangay. Tool assemblages,clothing,pottery,jewelry and the like are technological artifacts. These man-made objects illustrate the ability of man to respond to the condition to the environment.

Culture may be associated with manufactured materials, for these are products of human behavior. Certainly, the structuring of the early Filipino society has been achieved in response to the needs of prehistoric Philippine communities. Is the era of crudge stone tools and weapons. In the phil, it was believed to have started in Cagayan, Valley. Man had no other tools than sharp edged stones that could be held by the hand. Many kinds of stones, which naturally produce sharp edges when broken or chipped, were commonly used. Such implements are called core tools if the remaining core itself is used as the tool. Pebble tools are those rounded stones like those found in the riverbeds. They are called cobble tools if these rounded stones are larger. Flake tools are skillfully edged and shaped.

Man’s principal way of adaption to the environment was by hunting. These stone tools could be used for smashing the bones of animals and shellfish that they have gathered. These implements may also be used in cutting, splitting, stripping, and piercing wooden branches, palm leaves, and bamboo. Tree barks were used for clothing.

New types of stone tools appeared in various parts of the Philippines, more polished and highly specialized, primarily blade and ax- and adz- like forms for forest clearing and boat making. The smooth surface of this type of stone tools was made possible by rubbing against another stone. This development resulted to the so-called New Stone Age or Neolithic Period.

By striking the stones, sparks have been produced, which resulted to the making of fire at will by the ancient settlers. The production of baked clay pots in the New Stone Age implies that fire had been fully utilized. The manufacture of pottery was made possible by a process called Kilning which makes use of fire. Fire eventually changed the lifestyle of the people, particularly in the preparation of their meals. Thus, in inhabitants could already grill or boil their food. Jars as burial coffins for secondary burial made. Manungguul Jar, an example of funerary vessel dating between 890 B.C. and 710 B.C., is now considered a National Cultural Treasure of the Philippines. Philippine Pottery shown a variety of shapes and decorative techniques, such as incision, stippling, applique , and impression by rope and mat. Pottery become more functional like the palayok for cooking, the banga and tapayan for storing liquids. Refers to the time in the development of human culture where tools and weapons were made of metal, which gradually replaced stone tools. The metal implements at this stage were crudely fashioned. First metal to be widely used was copper, Raw copper was then pounded into ornaments and to some extent into tools. The appearance and utilization of improved iron tools as the major technological device for exploiting the environment constitute. Were recovered in Luzon. Tools specimen were also dup up in Palawan and Masbate. The early Filipinos made metal implements like knives, the sumpak, the kalikot for pounding betel nuts into powder, and gongs to mark the hours of the day and night.

Scholars contend that during this age important industries were metalworking, pottery making, glassmaking, and tie-and-die weaving. About the turn of the Millennium A.D., some families from surrounding island kingdoms set sail in boat and establish their communities along riverbanks or on deltas. Which is the period of trading relations with neighboring island, mostly by asian traders. These early wooden watercrafts iin the country were called balangay. The balangay was basically a plank boat. It was driven either by a sail or by paddling. Malay was the principal language of Southeast Asian commerce during those times. It is not surprising that a number of Malay loan words to Philippine language pertain to commerce. At the height of the Sri Vijaya power around 1000 A.D., the Sri Vijayan merchants conducted extensive trade with China and India. In the 12th century the Sumatra based kingdom of Sri Vijaya had also expanded as influence In the Philippine archipelago. According to Sulu tradition between 900 and 1200 A.D., immigrants from Champa, an indianized kingdom in Indochina, established a trading colony with the Buranuns of Sulu. The men of Champa were called Orang dapuans who were then vassals of the Sri Vijaya Empire. The Orang Dampuans settled in Taguima. They became the ancestors of the Yakans.

Years later, immigrants from Banjarmasin, Borneo settled in Sulu. They were the Orang Banjarmen of Bandjarmasin. They engaged actively in the rich pearl trade. To establish goodwill to the Buranuns, they brought with them a beautiful princess and offered her as a bride to the native ruler. This state marriage resulted to deeper relations between. Sulu and Borneo like the Dampuans, the Orang Bandjar introduced India culture in Sulu.

Centuries of direct contact with these Indianized traders left vival traces of Filipino history and culture. The Indian influence were clearly noticeable in the religious beliefs, language, literature, and custom of the ancient Filipino. Bathala, the name of the chief god of the pre-Christian Tagalogs, came from a Sanskrit term Bhattara, meaing “Great lord”. Also of Hindu origin was the belief of the early natives that the universe is filled with good and bad spirits. They offered religious sacrifices and prayers to these spirits for help and protection. There are three main imperatives that underlie Filipino value orientation: relational imperatives (actual person to person encounters), emotional imperatives (emotionally laden norms), and moral imperatives (Filipinos are more moralistic than ordinarily perceived and that the most powerful moral imperative in Filipino culture is “utang na loob” or debt of gratitude/loyalty or commitment). Unlike in other Asian countries, women in the Philippines occupy a high status. Equality with men is a birthright of the Filipino women. 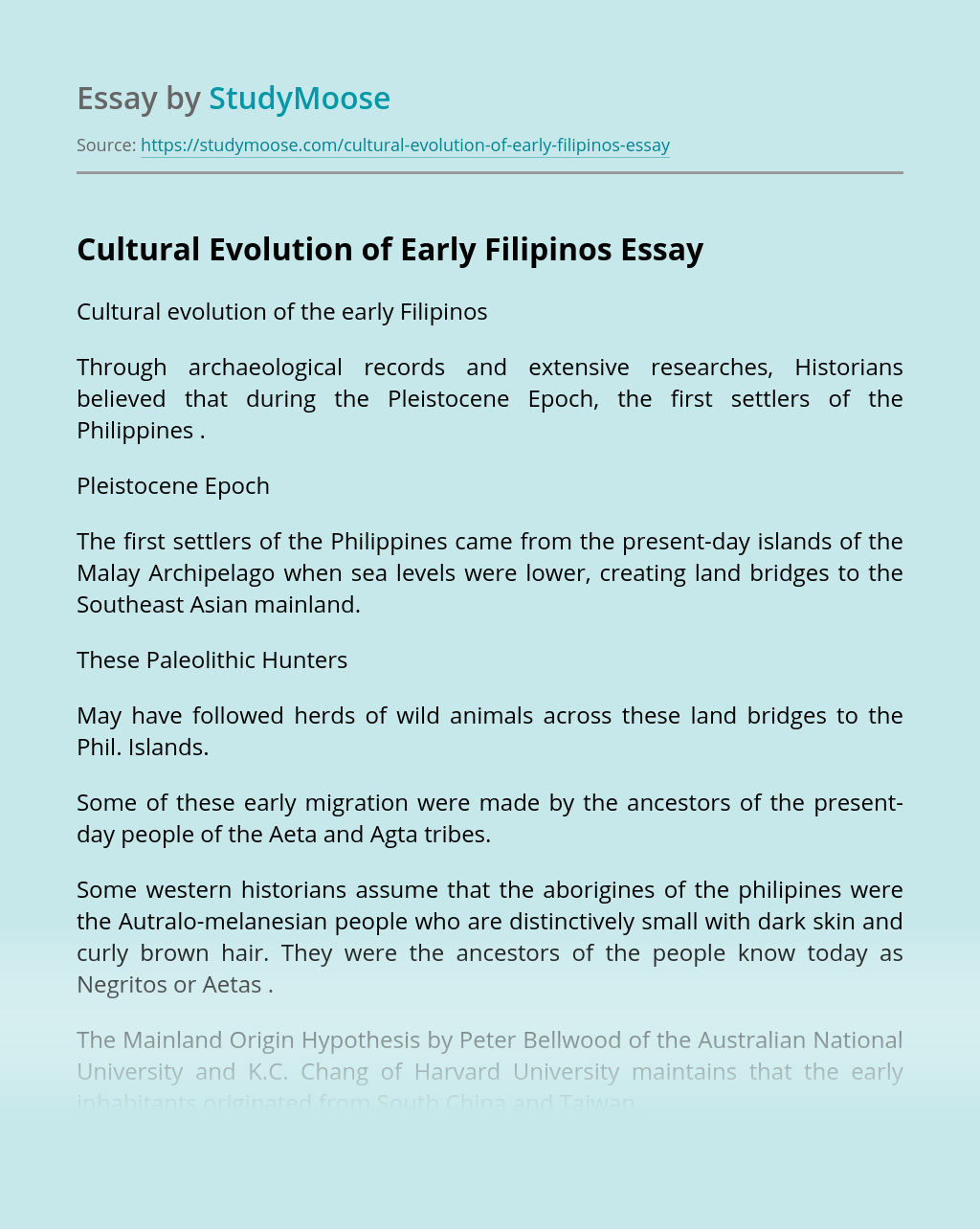