Anyone familiar with New Orleans will not fail to passionately describe to you one of its great rich culture – Jazz! That New Orleans is the cradle of Jazz in the world is an undisputable fact. Yes, Jazz was born in this part of the world in the late 1800’s before spreading to other parts of America and the rest of the world thereafter. In the annual cultural festivals in New Orleans over the years, Jazz was always more or less the heart beat of the whole cultural process.

Turn in your highest-quality paper
Get a qualified writer to help you with
“ Cultural Effects of Hurricane Katrina ”
Get high-quality paper
NEW! AI matching with writer

The festivals could not start or finish without Jazz.

But boom! This was rudely interrupted in August 29, 2005 when Hurricane Katrina hit home. Within no time over a thousand lives were lost and more than 700,000 people were displaced, with more than 300,000 homes damaged. America had never witnessed such a catastrophe that led to one of the most severe humanitarian crisis it had ever seen (www. weather. com). New Orleans would never be the same again.

This traumatic tragedy had a great psychological impact on the victims. Many people and families were separated from their loved ones.

These included young children who were separated from their parents and pets. No one’s life was going to be the same again. Within no time families that used to gather in the evening at the dinner table could hardly locate the whereabouts of their loved ones. As such, these lead them to suffer great uncertainty and anxiety. Many residents were quite familiar with the comfort and warmth of their beds after sumptuous evening meal, yet now were hurdled together sleeping on the floor of the crowded Super Dome.

No one had experienced this ever before.

Families that previously could afford all they wanted were now reduced to paupers living on rations and shelter provided by the government and well-wishers. Schools, factories, hospitals and other important facilities were shut down and no life was the same again. People who were previously running successful businesses, had no businesses to go to anymore, employees familiar with their paychecks every week were rendered jobless and unemployment levels rose from 6%-12%. No one was left out including animals, with over 8,000 animals being rescued and more others reported dead.

In most of the rescue missions via helicopters and rescue boats, captains often refused to load pets so that they could create room for more people. However, many families were not co-operative, they refused to evacuate without their pets because of the strong attachment to them. When disasters strike the most vulnerable groups are children, women, poor families and senior citizens. In Katrina’s case, nothing was far from this truth; most of the victims fitted this description precisely and most came from the poor African American community.

Lack of water, food, shelter and sanitation facilities led to the outbreak of health problems. Cases of dehydration, food poisoning and diarrhea were on a sharp increase. Also because of the contamination of food and drinking water supplies, respiratory illnesses were on the upward trend. This complex situation was coupled by the fact that major chemical plants and refineries released pollutants into the water-ways further aggravating the already delicate situation. Thus asthmatic people and those with allergy condition were tremendously affected (Ryan Parry 1).

There was also a sharp increase in mental illnesses and depression brought about by trauma and shock. Perhaps the most psychologically affected were young children between the ages of 3 years to 18 years. They had never witnessed such disaster in there lives before, they started refusing to go to school, there academics took a nose dive and suffered memory problems and mostly feared separation. The situation was further compounded by the fact that relief and rescue efforts were not quickly dispensed as they should have.

The Government was criticized for being slow to respond and for being discriminative against the African Americans. By the time help was coming the victims were already disillusioned, impatient and ravaged, they resorted to looting and stealing, something that had never been witnessed before (Julian Borger and Duncan Campbell, 2). The human migration that took place after Katrina has never been witnessed before in America; save for the Great Migration in the 1830’s when there was mass immigration from Africa – thanks to slave trade.

Thousands of families relocated from New Orleans to escape the wrath of Mother Nature. For many they could not bare this nightmare anymore and remaining behind would constantly remind them of the trauma. Many people found it also very difficult to reconstruct their lives especially after loosing important documents like insurance information, birth certificates, marriage licenses and other important documents. Behind every dark cloud there’s always a silver lining. Whenever disaster strikes, it brings in a very high sense of unity among the victims.

It was admirable to see people from various backgrounds sleep side by side in the Super Dome. No one was more equal than the other. Hence, there were people of mixed races, diverse financial and social backgrounds, sharing common amenities. Jazz had united the residents of New Orleans for many years, Katrina despite of its untold damage and loss of lives had united them again, albeit in a strange and different way! Works cited Julian Borger and Duncan Campbell. The Guardian. Why did help take so long to arrive? 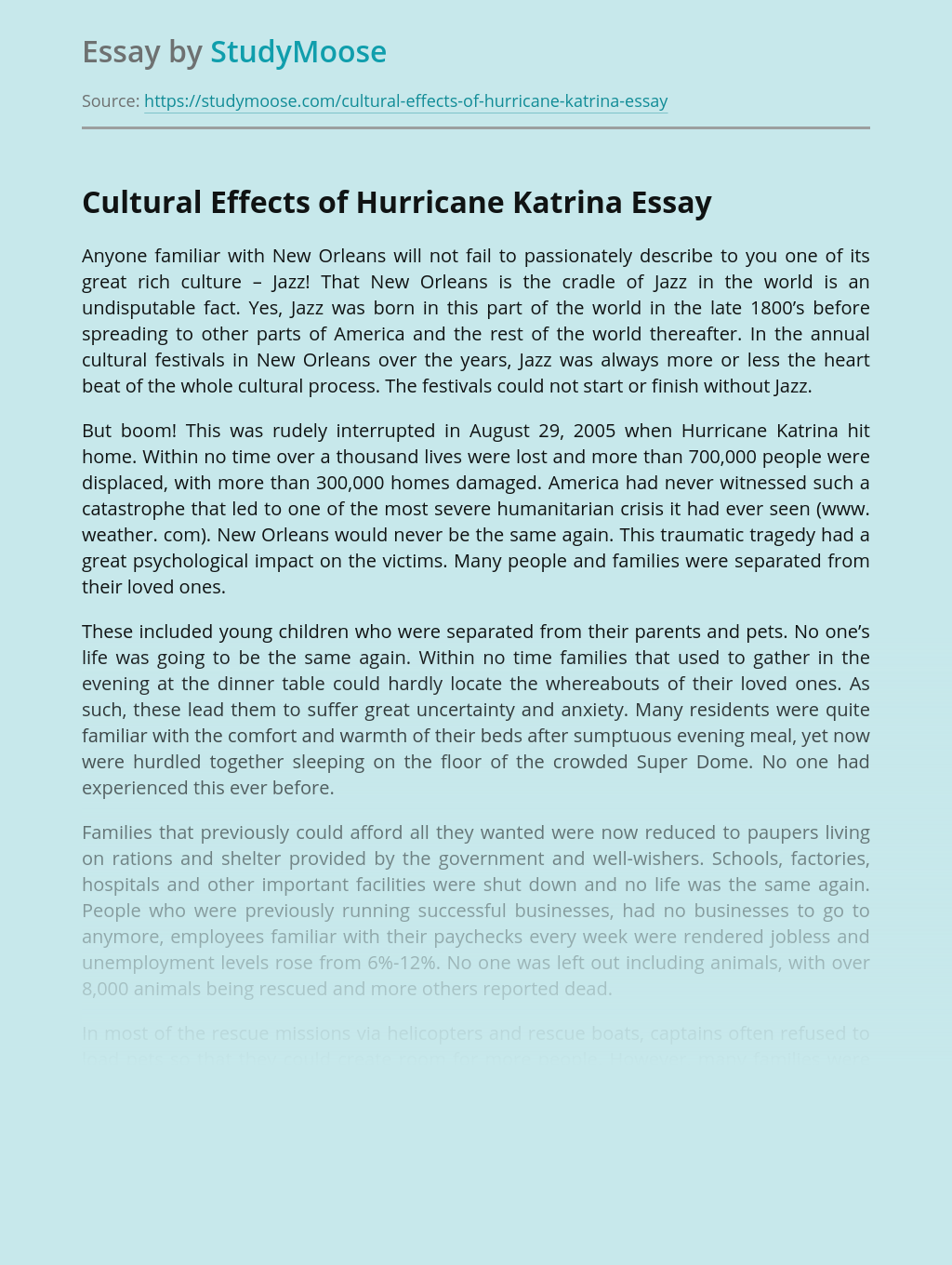 Turn in your highest-quality paper
Get a qualified writer to help you with
“ Cultural Effects of Hurricane Katrina ”
Get high-quality paper
Helping students since 2015
Stay Safe, Stay Original