Cultural Diversity and Its Effect on Mnc's

These days cultural diversity plays a significant role in a company. The criteria discriminating these groups include race, geographic basis, civilization, gender, age, functional or educational background, physical and cognitive competence, language, lifestyles, beliefs, cultural background, economic category, occupancy with the organization and sexual preference. As a MNC works in a global market it must be ready to detect all possible changes in the global environment and it has to be able to communicate and adapt the identity of the company to them.

Don't use plagiarized sources. Get your custom essay on
“ Cultural Diversity and Its Effect on Mnc’s ”
Get custom paper
NEW! smart matching with writer

For example in India women’s will not work for night so they have to manage time for their convenience. The company can’t offer quality products or services to the customers if it doesn’t understand and take in account the impact that the culture has in all the processes. Workers usually think that their behavior hasn’t got any influence on the final product or service, but to be effective, every part must have a clear vision of the company and a clear mission on it.

The social, political and enterprise structure depends on everyone in the company, so the internal area and the human resources, one of the most important areas of a company, must be developed with the rest of the company to achieve their goals. The misunderstanding and ignoring of different cultures, language and historical background lead to disasters in the field of setting up multinational business. To avoid this, a general knowledge of another nation’s culture and history is essential. So general cultural knowledge, if coupled with prejudice and prejudgment, is an obstacle to effective global management.

One main challenge under culture is language barriers. Communication is necessary for management. Yet communication relies upon a common language, a condition that does not exist in many global business situations and that is when the problems start. The most pronounced sign of the language barrier at work can be found in the relationship between a multinational parent company and its network of global subsidiaries. Several factors contribute to the difficulty of achieving and sustaining effective communications and a productive, collaborative relationship. Even if an employee is relatively competent in the language of the other party, loss of rhetorical skills is always present as the use of humor, symbolism, sensitivity, negotiation,
persuasion and motivation requires a very high level of fluency. 2.2 Attitudes towards Appointments and Deadlines

In America, Americans were give strict obedience to time commitments and it was a basic principle of professionalism and polite behavior. Because everything tends to be strictly scheduled, postponements in one appointment or deadline can have a serious ripple effect on a coworker or customer’s other work commitments. But for example: The more flexible and open-ended approach to time of Indian and Sri Lankan businesses culture can create tensions and adverse impressions on American counterparts 3. MNC Workforce Diversity

Multinational Companies (MNC) had to face a number of new challenges in their daily business over the past couple of years. Globalization changed various things for global players. In general MNC structure shows a focus on their main resources and departments like finance, technology, marketing, sales and production, because they want to have a large number of customers and to earn profit. A huge challenge MNC have to manage is their workforce diversity. The milestone research by Hofstede with 116,000 recruits of IBM, a giant MNC in 50 countries and 3 regions recognized four cultural values in the workplace: Individualism-collectivism, Power difference, Uncertainty avoidance and masculinity-femininity. For example: the United States was the greatest and Guatemala was lowest in individualism. Malaysia was the highest and Austria was the lowest in the power distance values. Greece was the highest and Singapore was the lowest in the uncertainty avoidance values. Japan was the highest and Sweden was the lowest in the masculinity values. There have been significant amount of intercultural and cross-cultural studies with these cultural values, and some studies demonstrated the relationship between communication styles with some of these values. Because of this diversity one of the key success factors of MNC is the recruitment and selection of human resources who offer valuable uniqueness. These individuals are forming the values and beliefs of a business. There are two key challenges within global HRM specifically building global corporate cultures and developing global leaders that have to be mastered in order to manage diversity and be successful in the global business surroundings.
Managing diversity in MNC during HRM

To manage workforce diversity in MNC it’s a challenge for the human resource management to set up a global corporate culture. To recognize with the corporate culture of the company is the most significant thing for the workforce. That is why building a global corporate culture is one of the most important challenges for Multinational Companies. Employee behavior is possibly the most critical challenge that multinational organizations have to deal with. In Multinational Companies there is a huge potential of conflicts, because of its diverse personalities. As a result of this anxieties will arise among employees. Individuals try to adapt their behaviors to fit the demands of a particular environment. In order to adapt to the environment, individuals sacrifice their individualities to fit in with their new cooperatives. Individuals become incorporated into the culture of an organization when they are successfully understood into the workplace. Successful cultural adaptation reduces members’ anxiety, role conflict, and intentions to leave. Additionally, successful adaptation increases organizational obligation, job satisfaction, confidence, and job familiarity as well as successful acculturation and establishment of relationship. 4. Challenges of Working across Culture

4.1Stereotyping
They are usually misrepresentations and inaccuracies fixed in false guesses and faulty analysis. Usually this valuation is seen in a negative perspective. The challenges to organizations are to acknowledge differences in positive terms. Power struggles and can be the result of stereotyping in organizations. For example, placing women, who stereotypically have had lower status than men in society; in senior management positions create status incongruence in the minds of many of the people. This can root complexities in the leader/subordinate relationship and can root power differences in a business. This is done in such a way that affiliates of minority groups may find it hard to use influence over decision processes in the organization. 4.2 Ethnocentrism

Informal groups play a significant role in any business. They influence both the success of the business and the career success of individuals. Total quality plans depend heavily on employee contribution and informal networks can greatly impact this process. Informal groups are influenced by factors such as common language, perceived social similarity, and ethnocentrism. These collective networks are critical for communication in organizations. It has been found that race has a major effect on collective networking. This is not astonishing as you would expect people to have a preference for interaction with members of one’s own culture group, especially in an informal context. 4.4 Parochial Attitude

Parochial attitude refers to a person’s incapability to see cultural diversity. This is exactly the reverse of ethnocentrism. Managers who are sent overseas frequently meet people who are also dressed in suits and speak their language – this prompts them to disregard all other cultural differences and make them feel that all others are “just like us”. In today’s business globe, most people are apt to dress similarly – in suits or other formulas and talk in English, but this does not indicate that all people have the same culture – but people often only see the surface and think that the other person shares the same cultural values. Managers from US/UK often tend to display a strong parochial attitude – mainly because the people with whom they relate on regular basis can speak English and are dressed similarly in suits or western dresses.

Cultural Diversity and Its Effect on Mnc's. (2016, Mar 21). Retrieved from http://studymoose.com/cultural-diversity-and-its-effect-on-mncs-essay 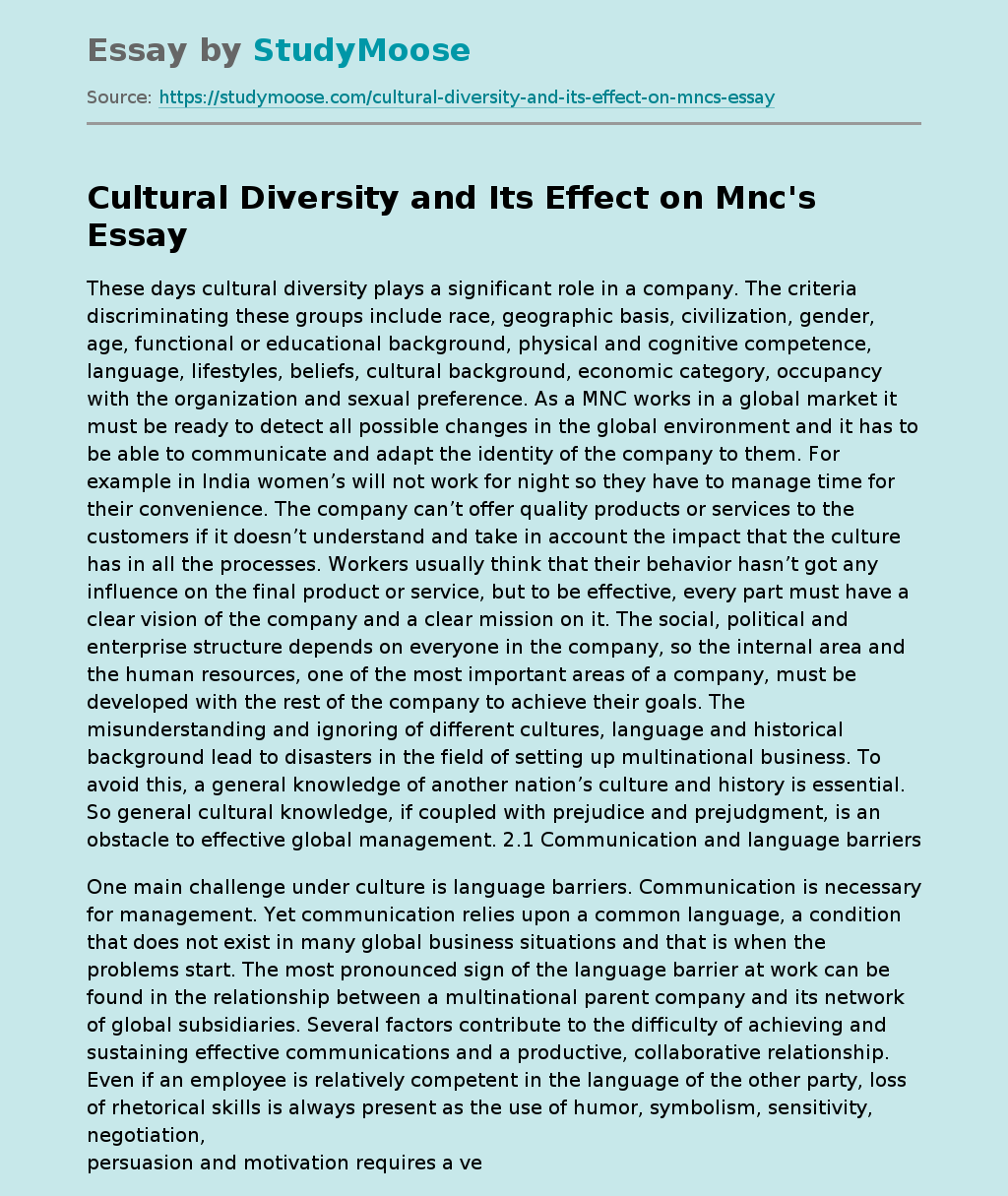