Sense of Self and Space: Cultures

Now that we have defined a thesis about the term culture we show seven categories mentioned by the authors Harris, T. Moran and V. Moran, which help us understand cultural diversity. They should illustrate the wide spectrum of factors to be considered when managing an international team (Harris, T. Moran & V. Moran, p. 5, 2004). Sense of Self and Space: Cultures can interpret the comfort one has with self in a different way. Self-identity and acceptance can be manifested by humble bearing in one culture and by macho behaviour in another.

Don't use plagiarized sources. Get your custom essay on
“ Cultural Differences ”
Get custom paper
NEW! smart matching with writer

For example Americans have a sense of space that requires more distance between individuals, while Latins and Vietnamese will stand closer together. Some other cultures are very structured and formal, while others are more flexible and informal. Each culture probates self in a unique way (Harris et al. , p. 5, 2004). Communication and Language: People are not able to communicate their innermost desires, considerations and feelings as fast and as free of misunderstanding in a language that is not their native language.

Some nations have fifteen or more major spoken languages, and within one language group there are dialects, accents, slang, jargon, and other such variations. Furthermore often the meanings given by gestures differ by cultures. So not only the verbal part of one language differs to another one but also the nonverbal part (Harris et al. , p. 5-6, 2004). Dress and Appearance: Not only the language makes a difference between cultures also the garments and adornments as well as body decorations tend to be culturally distinctive.

Each nation has its special style

Each nation has its special style, for example the Japanese kimono, the African headdress, the Englishman’s bowler and umbrella, the Polynesian sarong, and the Native American headband. Some tribes smear their faces for battle, while some others, especially women, use cosmetics to manifest beauty (Harris et al. , p. 6, 2004). Food and Feeding Habits: Also the manner in which food is selected, prepared, presented, and eaten often differs by culture. Simply put, one man’s pet is another person’s delicacy. Hindus are not allowed to eat beef while Americans love it.

In Muslim and Jewish culture it is forbidden to eat pork although Chinese and others eat it extensively (Harris et al. , p. 6, 2004). Time and Time Consciousness: Especially the sense of time differs by culture. Some are exact and others are relative. Usually, Germans are precise about the clock, while many Latins are more casual. There is also a difference in the sense of seasons of the year. Some areas of the world think in terms of winter, spring, summer, and fall while for some others the more meaningful designations may be rainy or dry seasons (Harris et al. , p. 6, 2004).

Edward Hall, who is an anthropologist, maintains that the mind is internalized culture, and the mental process involves how people organize and process information. Life in a particular locale defines the rewards and punishment for learning or not learning certain information or in certain way, and this is confirmed and reinforced by the culture. It is known that Germans stress logic, while the Japanese and the Navajo reject the Western idea of logic. For a Hopi Indian logic is based on preserving the integrity of their social system and all the relationships connected with it.

Some cultures prefer abstract thinking and conceptualization, while others favour rote memory and learning. To put it in a nutshell it seems universal that each culture has a reasoning process, but then each manifests the process in its own distinctive way (Harris et al. , p. 8, 2004). Work Habits and Practices: The last dimension of a group’s culture, which we want to mention, is its attitude toward work, the dominant types of work, the division of work, and the work habits or practices, such as promotions or incentives (Harris et al., p. 8-9, 2004).

These seven general classifications are a basic model for assessing a particular culture. It does not include every aspect of culture, nor is it the only way to analyse culture. It should only help to understand that there are many differences between cultures and that culture is a complex system of interrelated parts that must be understood holistically.

“International Management” comes into its own when the range of operations undertaken by a corporation or comparable institution extend beyond the national border in which it is registered, referred to here as the “country of origin”. Assuming that management activities are directed not only at the input of material resources but also include the co-ordination of human activities beyond national borders, international Management as such necessarily addresses goal-oriented communication with foreign interactional partners.(Duefler, Joestingmeier, p. 4, 2011)

To outline this quote it can be said that whenever there is a geographical border concerning a business activity we must talk of international management. This sounds very simple but should an international manager only consider a geographical diversity or is it also essential to consider diversity aspects concerning culture, males, ages, etc.? The next chapter deals exactly with this question. There it should be clarified how great the relevance of cultural diversity actually is in a team.

Nevertheless understanding an international team consisting of cross cultural team members is more than being aware of cultural differences. However these differences can cause imbalances like member exclusion, subgroups and other outcomes. For that we now try to focus on the question: what are the considerable factors referring to cultural diversity, which have to be overcome so that successful teamwork is possible? In addition it should be discussed if there is a difference leading an international team in contrast to an ordinary team?

As related to the first question the article „Managing Multicultural Teams“ in the Harvard Business Review can be paraphrased where it is mentioned that cultural problems inside a team are difficult to realize and moreover difficult to analyse. As a matter of fact they are often only recognized after insurmountable personal ‘gaps‘ have already arisen. (Brett, Behfar & Mary C. Kern, p. 1, 2006) Brett, Behfar and Kern filtered out four essential ‘cultural challenges’, which could occur when working in a multicultural team.

Despite the fact there are plenty more, a multicultural team manager should know that explicit cultural problems could emerge because of: different communication styles, accents and fluency in speech when collaborating in a foreign language, the hierarchy style in a team, ways of solving conflicts as well as the style of making a decision. Concerning the communication style it could be said that there are two different types: the first one is talking, asking and discussing in a direct way.

Especially in western countries it is widely common to give your counterpart exact and brief information what you want, how things should be done and especially how to do things differently. Non-western cultures tend to circumscribe a problem because harmony in a team is one of the most important factors for them so that they can perform well. A reason of conflict could also be the fact that articulating in a foreign language is very difficult. It often leads to problems of misunderstandings ore even not gaining the ‘right status of competence‘ because of not finding the right words and not be able to speak fluently.(Brett et. al. , p. 1-2, 2006)

Furthermore people become afraid of communicating freely and as a consequence of that the whole collaboration process takes more time and the working process is not as efficient. The authors Hofiele and Bromme believe that especially in terms of building team cohesion it is important to face the aforementioned challenges and not to underestimate them. (Hofiele et al. , p. 1, 2000). Another difference in various cultures is the understanding of hierarchy in a team.

According to the Brett, Behfar and Kern a team generally is ‘flat structured‘, however in some cultures ‘higher status‘ team members are treaded in a different kind of way. A good example is mentioned in their article, which narrates a story of a U. S. team member of a Korean-U. S. Team, which had problems to receive information from their Korean colleagues. For this reason they contacted the superiors of the Korean Members. The result of the US team members’ intention to solve the problem was that the differences in the team became worse because Korean superiors felt disappointed.

Their attitude was that only the Korean team members should confront their own superiors with upcoming problems. Moreover the Korean team members felt in a way incorrectly treated by their US colleagues because they felt overlooked. Connected to the aforementioned problem is the last challenge described in the article “managing multicultural teams”, in particular the way of making decisions. If we want to describe possible problems standing in connection with that it is useful to compare the ‘Western‘ style of making decisions with the Asian style.

Brett, Behfar and Kern interviewed a manager working for a US Company who was negotiating to buy Korean products. He narrated the difficulty of the negotiation with the following words: „On the first day, we agreed on three points, and on the second day, the U. S. -Spanish side wanted to start with point four. But the Korean side wanted to go back and rediscuss points one through three. My boss almost had an attack“. In the US economy it is usual to make decisions in a short time while Asian businessmen are willing to analyse and understand the content of the whole agenda.(Brett et al. , p. 3-4, 2006)

As we could see there is a high potential of upcoming problems when collaborating on an international team. Even though there are plenty more, we think that these are the major problems such a team has to face. Now that we know the challenges of an international team we try to focus on the solutions for solving the problems and be well prepared for the challenges. The following chapter should figure this out and also point to the fact that some requirements for the solution strategies have to be given. 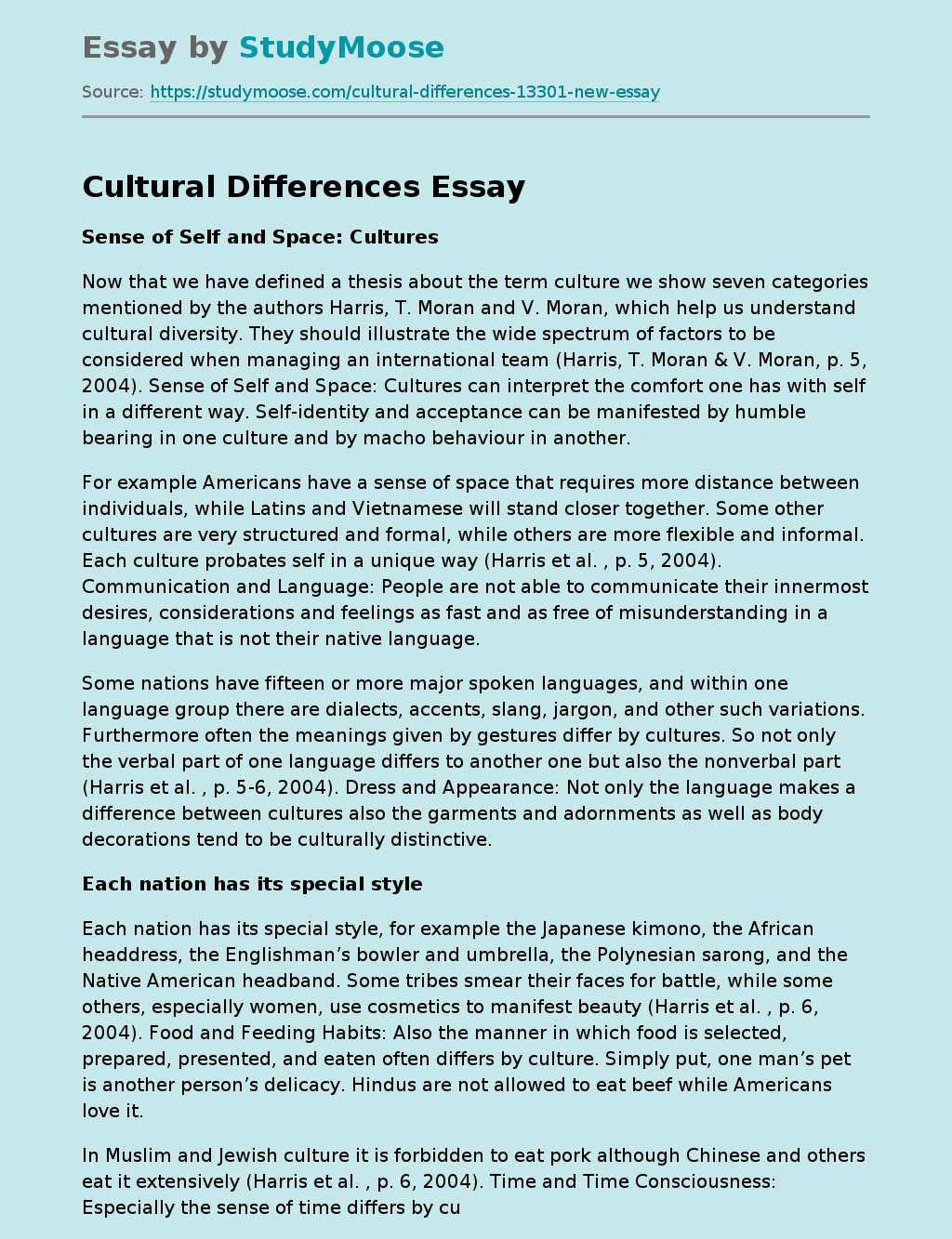