Cultural behavior is behavior exhibited by humans (and, some would argue, by other species as well, though to a much lesser degree) that is extra-somatic or extra-genetic, in other words, learned. For a behavior to be considered cultural it must be shared extra-genetically; that is, it must be taught. Language is an important element in human culture. It is the primary abstract artifact by which culture is transmitted extra-geneticallyCultural programming is an integral part of the overall school programming.

The school has several initiatives that provide for cultural experiences.

Don't use plagiarized sources.
Get Your Custom Essay on Cultural Behavior Just from $13,9/Page

Culture is a collective programming of the mind that distinguishes the members of one group or category of people from another. The position that the ideas, meanings, beliefs and values people learn as members of society determines human nature. People are what they learn. Optimistic version of cultural determinism places no limits on the abilities of human beings to do or to be whatever they want. Some anthropologists suggest that there is no universal “right way” of being human.

Right way” is almost always “our way”; that “our way” in one society almost never corresponds to “our way” in any other society. Proper attitude of an informed human being could only be that of tolerance. The optimistic version of this theory postulates that human nature being infinitely malleable, human being can choose the ways of life they prefer. The pessimistic version maintains that people are what they are conditioned to be; this is something over which they have no control.

Human beings are passive creatures and do whatever their culture tells them to do. This explanation leads to behaviorism that locates the causes of human behavior in a realm that is totally beyond human control. It does not imply normalcy for oneself, nor for one’s society. It, however, calls for judgment when dealing with groups or societies different from one’s own cultural differences manifest themselves in different ways and differing levels of depth. Symbols represent the most superficial manifestations of culture, with heroes and rituals in between.

Symbols are words, gestures, pictures, or objects that carry a particular meaning which is only recognized by those who share a particular culture. New symbols easily develop, old ones disappear. Symbols from one particular group are regularly copied by others. This is why symbols represent the outermost layer of a culture. Heroes are persons, past or present, real or fictitious, who possess characteristics that are highly prized in a culture. They also serve as models for behavior.

Rituals are collective activities, sometimes superfluous in reaching desired objectives, but are considered as socially essential. They are therefore carried out most of the times for their own sake (ways of greetings, paying respect to others, religious and social ceremonies, etc. ). The core of a culture is formed by values. They are broad tendencies for preferences of certain state of affairs to others (good-evil, right-wrong, natural-unnatural). Many values remain unconscious to those who hold them. Therefore they often cannot be discussed, nor can they be directly observed by others.

Values can only be inferred from the way people act under different circumstances. Symbols, heroes, and rituals are the tangible or visual aspects of the practices of a culture. The true cultural meaning of the practices is intangible; this is revealed only when the practices are interpreted by the insiders. Sources of cultural programming are family, friends, peers, schools, media, acquaintances, places of work, places of entertainment… in that order of importance. Indeed, pretty much everyone we meet or interact with in any way. 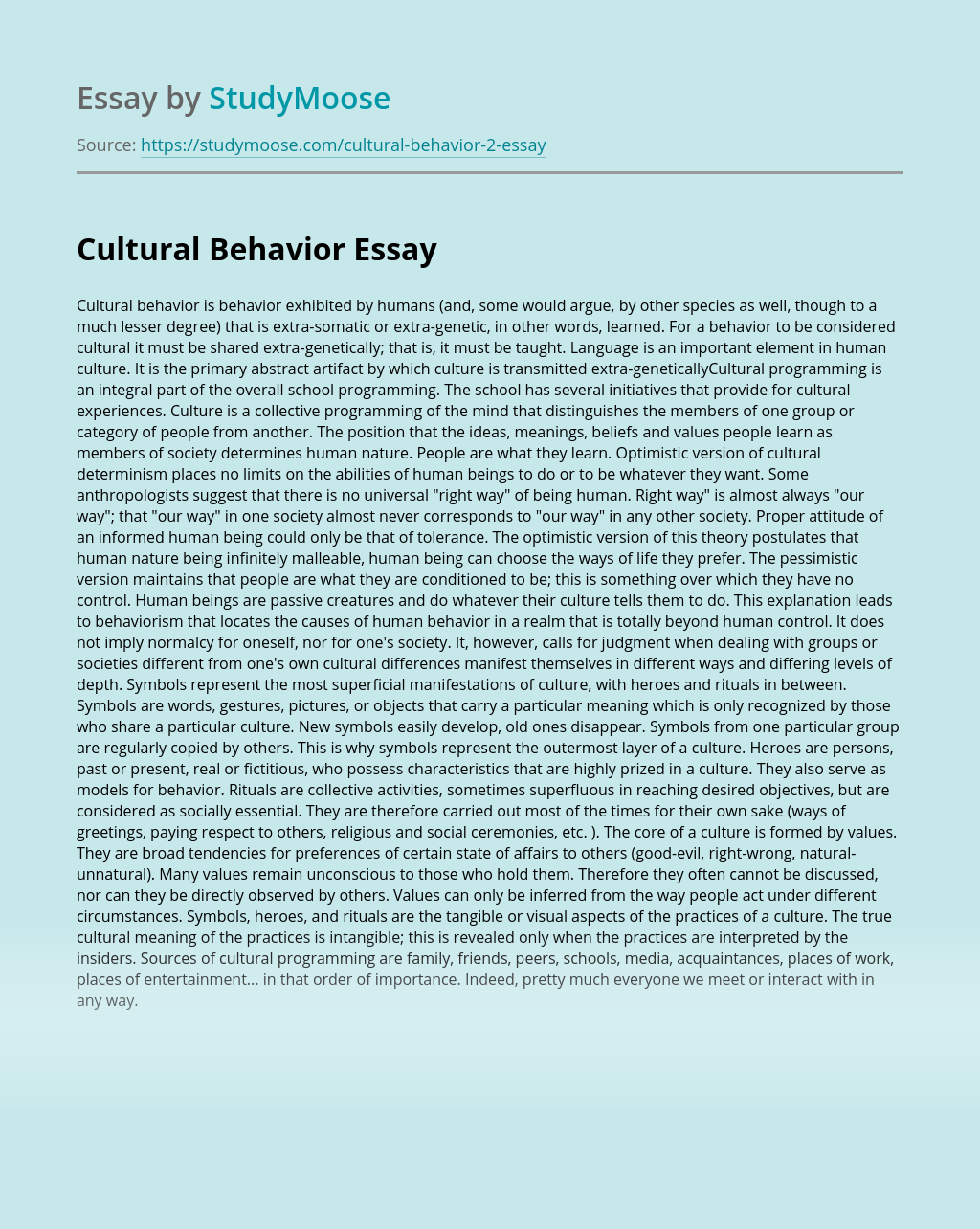 1. Thoughtless When someone celebrates birthday, graduation or winning the lotto in the neighborhood, the party lasts through deep in the night, keeping neighbors awake by the noise of an out of tune videoke singer. 2. Inconsiderate Even after agreeing to meet at a certain time, some Filipinos manage to fail this initial agreement, using...

In the following paper I will talk about A.J. Ayer’s “Freedom and Necessity,” and I will explain the dilemma of determinism and Ayer’s compatibilist solution to it. I will explain some of the examples Ayer uses to explain the difference between cause and being constrained, and how both affect one’s free will. I will also...

View sample
The Most Disastrous Day Ever

The day had come. The day I was really waiting for. It was my birthday. The best day of my life, as I woke up and I expected a lot, mainly from my parents .They promised me to buy it on my birthday and am sure they bought it for me. The thing they promised...

Many researchers, scientists, and environmentalists are expressing concerns about changes in the overall climate of the earth. Some believe that a dramatically dangerous warming is taking place in the overall global climate, a problem that is referred to as “global warming.” This paper will attempt to explore this very issue. Climate is defined as the...