Cultural Appropriation is the adoption of theft or icons, rituals, and behavior from one culture by another. Some individuals will pick part of a culture belonging to a group of marginalized people then use it for fashion purposes. They leave the true meaning of the characteristic and disrespect the culture from which it is born. It is generally applied when the subject is a minority culture or somehow subordinate in social, political, or economic to the appropriating. It also prevents everyone from learning the true meaning of cultural exchange.

Don't use plagiarized sources. Get your custom essay on
“ Cultural Appropriation: Descriptions and Features ”
Get custom paper
NEW! smart matching with writer

One example of cultural appropriation is “blackface”, it is used quite often by caucasians. There was incident that included blackface at the University of Oregon when the white law professor Nancy Shurtz hosted a halloween costume party for her students and professors. The costume that Nancy wore was to dress as a book called “Black Man in a White Coat” which included wearing blackface portraying as an African American, a white lab coat, and a black afro.

Shurtz’s costume offended others at the party. Shurtz’s costume made the students and professors at the party feel shocked, angry, surprised, disappointed, and to have discomfort. Although some think blackface is okay and that there is nothing wrong with it due to freedom of speech, one has analyzed that cultural appropriation is racist, it causes cultural harassment, it also shows prejudice, and they will see how cultural appropriation is racist hurts a lot of people.

At the University of oregon, law professor Nancy Shurtz thought it was okay to paint her face black portraying as an African American for her costume party and other identified it as being racist.

The report notes that “The history of blackface is used as a tool to demean and insult black people (Jaschik, “Oregon Professor”). “The report commissioned by the university doesn’t challenge her stated intent, which was to draw attention to the book and its anti-racist message (Scott, Jaschik). Other individuals stated “Actual impacts that we heard from those interviewed included shock, anger, surprise, anxiety, disappointment and discomfort with remaining at the event” (Jaschik, “Oregon professor”). As one can see that some people paint their faces black out of inspiration or to become a character taking to as a joke so therefore, it is racist.

Students and teachers were shocked after looking at a photo of an Arkadelphia High School female student posing in blackface, which was racist. “But at the same time, she knew what she was doing when she was changing her skin color”(Cortlant, “Blackface photo”). The Arkadelphia Public School District has been made aware of a “social media post that occured over the weekend involving content”(Whitten, “Blackface photo”). The superintendent released a statement acknowledging the sensitivity of the issue while also saying the district is looking into it further. Some might find it offensive, some might not, but it is never okay to dress up as another race that is being inconsiderate.

Even though cultural appropriation is racist, some who think there’s nothing wrong with cultural appropriation/blackface say otherwise. On October 25, 2018 NBC host, Megyn kelly took a lot of heat for defending blackface Halloween costumes when asked about it on NBC News. (Yahr, “Megyn Kelly asked ‘what is racist’…people had answers”). Kelly’s response about blackface made some people think different of her as if she was being racist when she stated, “Back when I was a kid that was OK, as long as you were dressing up as, like, a character”(Kelly). Kelly spoke out against controversy that erupted last year over a reality star who portrayed Diana Ross. Nowadays people won’t see the point of view for example, Kelly speaking on blackface, she thought it was okay but others didn’t. There are some people who think differently as to what is right, when it comes to racism.

There are many people are serious as to why blackface should never be allowed. An individual quoted, “some people are against others for defending blackface”(Morasyd). Others stated “Black actors sometimes wore black faces too because the white audience didn’t want to see them on stage without it”(Harris). Some people feel they should have the option to live in ignorance about what’s wrong with blackface. Others will mistake blackface as a joke, but blackface is much more than just dark makeup used to enhance a costume, it is also used as a form of racism towards African Americans and to insult them.

Cultural Appropriation always involve members of the dominant culture “borrowing” from the cultures of minority groups. Even though some might think that people are overreacting to the cultural appropriation situation and that it is harmless, Many say that “There is no such thing as “harmless cultural appropriation”(Anyangwe, Eliza). When one dresses as blackface, they might do it just for fun or on purpose because they think that they might get away with it with their so called “white privilege” which is why one state that, “They signal not just what is trendy, but also what we revere or despise”(Anyangwe, Eliza). Cultural Appropriation is an attitude of disrespect toward the source culture. A lot of people dislikes cultural appropriation as one can see, individuals find it as “mocking” one’s culture.

Many people sometimes like to dress up as one culture or portray as a race, also known as cultural appropriation. Although culture appropriation didn’t offend some people, there were still others who felt disturbed by it. Author, Campbell has stated, “many of us feel like mourning and we feel hopeless and burned out. (Campbell, A10). Event though Nancy Shurtz tried to set an good example for her students to about ending racism, she actually ended up setting a bad example so therefore, black people shouldn’t be an option to be used as a halloween or to portray as character. 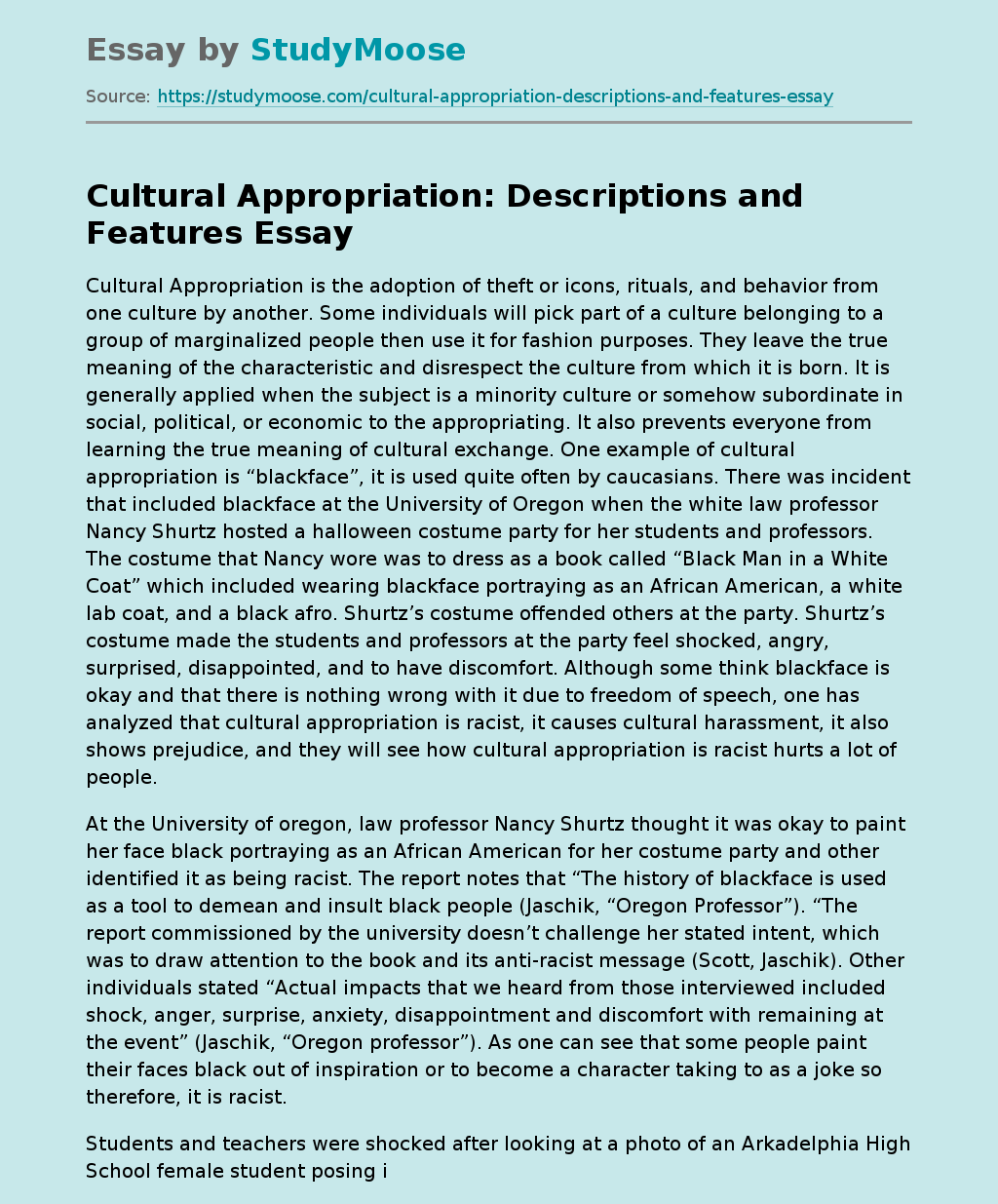