Cultural Achievements of the Italian Renaissance

Humanism was a key movement in the Renaissance and had a major influence on the cultural changes and achievements. Humanists studied history; they were particularly interested in Ancient Greek and Roman civilisation, and classical works, as well as in contemporary history and politics. Although the Humanists were Catholic, their ideas were more secular – “learning emerged from the cloister… to rejoin the human mainstream.”

The humanist ideas soon spread into the classroom. Previously, learning had been ecclesiastical – theocracy and theology were taught a lot – but during the Renaissance, learning became more secular.

Don't use plagiarized sources. Get your custom essay on
“ Cultural Achievements of the Italian Renaissance ”
Get custom paper
NEW! smart matching with writer

It was based upon classical culture so students studied classical authors, philosophers and mathematicians, for example: Ovia, Cicero, Livy, Plato and Aristotle. More progress could be made now that learning was not entirely based upon the church. Ideas soon spread due to the invention of the printing press in Germany in 1469; an ability to communicate to the masses quickly and reliably was a major cultural achievement.

Books became much more accessible, and this in turn was a factor in many people learning to read and write.

Before printing, most people were illiterate and very few books were in existence, as they had to be hand-written. Often the only book available was the Bible, which was copied out over a long period of time by a member of the clergy. Mass production of books was a very important development during the Renaissance as it meant that all the new ideas were obtainable to many more people than would have been the case, had printing not been invented.

Authors of the time include Dante (poetry) and Machiavelli (prose). The famous “Book of the Courtier” by Castiglione, goes into great detail about the attributes of the ideal courtier. Some of these attributes had only come to be regarded as important during the Renaissance, due to the sudden interest in, and ideas about culture: “he should have a knowledge of Greek and Latin [and be] very well acquainted with the poets… orators and historians”.

The Renaissance was only able to happen due to the large sums of money in Italy at the time. The Arts had many rich patrons such as the Church, the guilds, local governments and councils, courts and individuals (such as the Medici family of Florence). The Church frowned upon those whose job involved making an excess profit out of people; this applied to many trades in the Renaissance, including banking. In an attempt to be forgiven, the rich tradesmen would offer to pay for a new work of art (for example, a new chapel) for the Church. Naturally, the Church did not object to this, and so many beautiful pieces of art were created. As well as “devotion to God”, other reasons why so much money was spent on art were because it could be a way of boasting about how much money you had, and showing pride, glory and honour, and then more simply, for pleasure, and because it was “money well spent”.

One of the most important cultural developments during the Renaissance occurred in the visual arts: due to the “Rebirth” of the classics, artists had a new understanding of anatomy, which inspired them to carve nude figures so as to display how accurately they were now able to depict muscles and joints. Some sculptures even dissected corpses to discover how the human body works, just as anatomists had done in Ancient Greek and Roman times. It was a similar case with paintings of humans – they were infinitely more lifelike than they had been during the Middle Ages. Many of the artists whom are nowadays considered the greatest of all time, lived and worked in Italy during the Renaissance. The painter and sculptor, Michelangelo, is best known for two particular art works. He was commissioned by Pope Julius II to paint the ceiling of the Sistine Chapel in Rome (between 1508 – 1512). He also created the marble statue of David (Renaissance sculptors copied the style of Ancient Rome by using marble as their material). Architecture also copied the classical Roman building styles.

Humanism also had an affect on music. Music moved away from Catholicism: composers wrote both sacred and secular music, and hymns were no longer always written in Latin – they had more appeal to the public when written in their own national language which they could understand. Patrons decided that they wanted music for entertainment purposes, and hymns became a lot more cheerful, some of the underlying melodies actually originating from ditties that had been heard in the local public house!

During the Renaissance, the past (specifically during the times of Ancient Greece and Rome) was studied in detail; after rediscovering the past, we could move on, having achieved many things culturally: new inventions, new methods and most importantly – new ideas.

Cultural Achievements of the Italian Renaissance. (2016, Jul 21). Retrieved from https://studymoose.com/cultural-achievements-of-the-italian-renaissance-essay 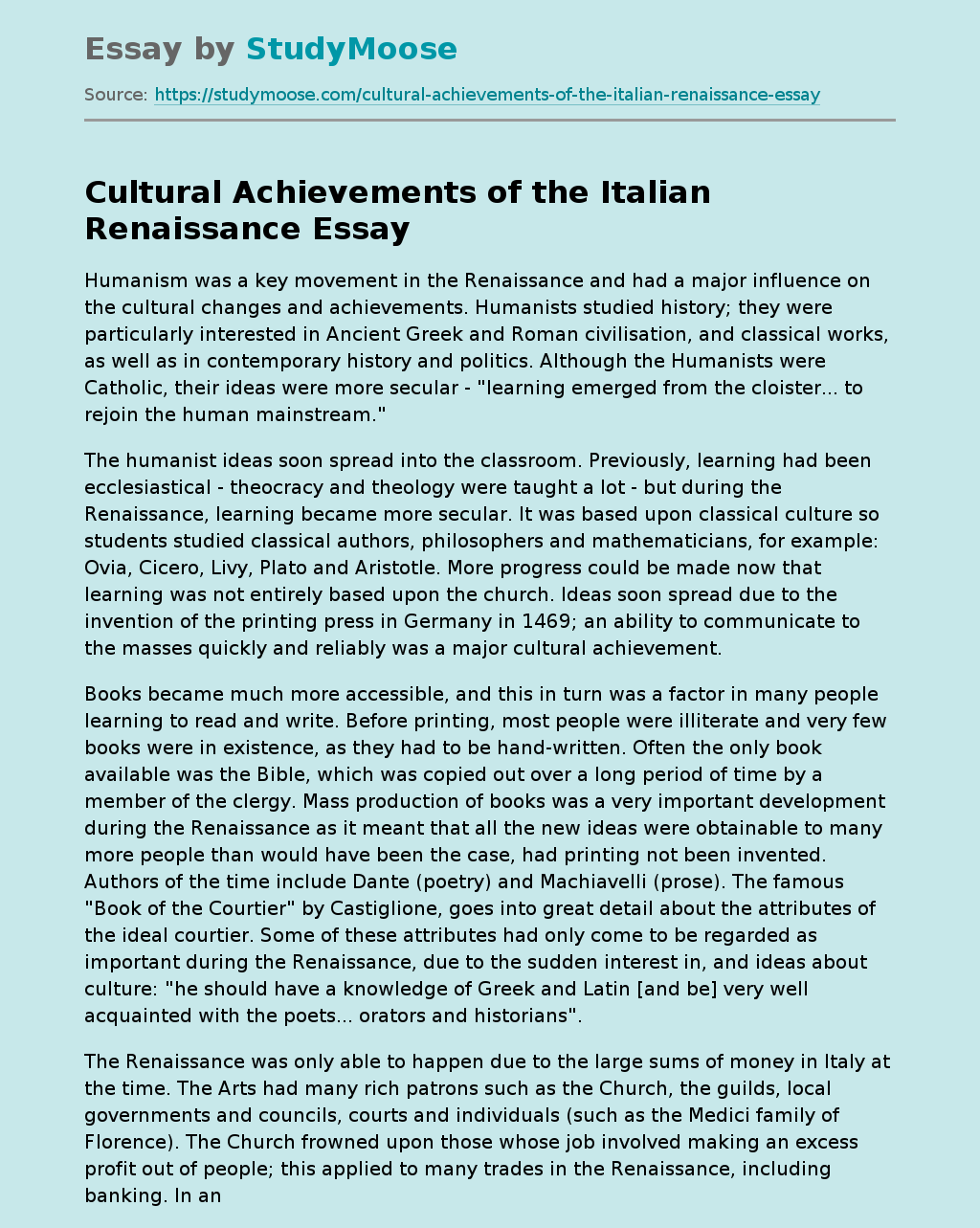