Cubism, style of the 20th century that was created by Pablo Picasso and Georges Braque in Paris from 1907 till 1914. This style shows us different perspectives of an object or a figure at the same time. Cubist artists were unified on keeping the same color, texture, form, and lastly space, they showed another reality in art that depicted radically fragmented objects. The beginning of cubism in painting is one of the initial step out of the same done artwork. Cubism have opened up different and new possibilities in art.

Don't use plagiarized sources. Get your custom essay on
“ Cubism by Pablo Picasso and Georges Braque ”
Get custom paper
NEW! smart matching with writer

If all paintings in history were done realistic, enclosed by the absence of photography, paintings would be the closest thing in affecting life these days. Cubism have allowed artists to see beyond the usual art of Europe and into more abstract forms. It have changed art in many different ways, and it made us see the world in a new way. Well as we all know cubism have presented paintings in a different form.

The cubists artists didn’t want to continue with the usual work of art that’s happening on canvases, they wanted to make a difference that anyone would be curious about yet still be readable and understandable. Instead of seeing one specific view of an object or a figure, the cubists have made it possible to see all viewpoints or perspectives at once. Using geometric forms, the cubists have combined unique paintings that have an even deeper understanding. Picasso and Braque have used newspapers, colored papers,etc, to show the different blocks of the objects.

It have broke structures into small squares. It was the beginning of a change in art.

In the cubism art movement theres two types, the Analytic and the Synthetic. The analytic cubism is the earliest phase of cubism, that ran from 1910-1912. Analytical was mostly led by Pablo Picasso and Georges Braque. It was about separating or breaking down an object into small different blocks and pieces, perspective by perspective, and gather them in different various points. This type of cubism is simple, it uses a wide range of neutral dark colors, also working with many overlapping layers to depict the different types of the subject in a painting. It alludes to genuine objects as far as recognizable details that become through repetitive use signs or clues that demonstrate the idea of the object. It also doesn’t use any extraneous materials in its artwork. Its viewed as a more organized and monochromatic methodology than that of synthetic cubism.

The synthetic cubism grew out of analytic cubism. Developed by Pablo Picasso and Georges Braque between 1913-1920’s. synthetic cubism was mostly about flattened images and wiping out the last prints of a three dimensional space allusion. Picasso and Braque have found out that through the repetition of analytic signs their work turned out to be progessively summed up, geometrically simplified, and way flatter. This took what they were doing inside the analytic cubism duration to a new level because it discarded the idea of three dimensions in their paintings. In the analytic cubism they used a different color palette that was mostly darl and neutral, using very muted colors and many earth tones dominated the work. Now in synthetic cubism the usage of color palette have changed the the bold colors are ruling over. Colors have changed and got much brighter. Reds, greens, blues, and yellows gave first rate empahsis to this more modern work.

It all started off with just one painting by Picasso called ‘ Les demoselles D’avignon ‘. It was one of the most famous paintings he did, that featured five women, each whose head looked as if it was on backwards. The women portrayed in the painting were were very ugly that they looked as if they were going to fall into pieces. Which caused a discussion with many individuals since they thought that it ought to look more realistic than and professionaly done than instead of a joke to art. Picasso havent followed any rules as well while doing this painting , but his main objective was to paint the women from different perspectives at a time which started cubism at the time, believeing that the viewer saw more than what really meets the eye. Though the painting was criticized throughtout history, now the painting is known as one of the first modern twentieth century painting. He broke many traditions and rules from the art world because he wanted to set his own guide to what he believes in art.

For Georges barque, he was influenced by the work of Paul Cezanne, which made him do a painting in landscape that he finished at L’Estaque. After this was done georges Braque then started to get close to Pablo picasso that started the anayltical form of cubism, and they later came with the second form of cubism which is Synthetic. Braque was born in a working class family and have spent most of his childhood in Le Havre working as a painter and decorator. His father and grandfather were even just like him and followed the same. He was self taught ever since he was a child. Later he moved to Paris when he became a follower of the art movement Fauvism. Henri Matisse hav also inspired him by his work according to Braque sayings. 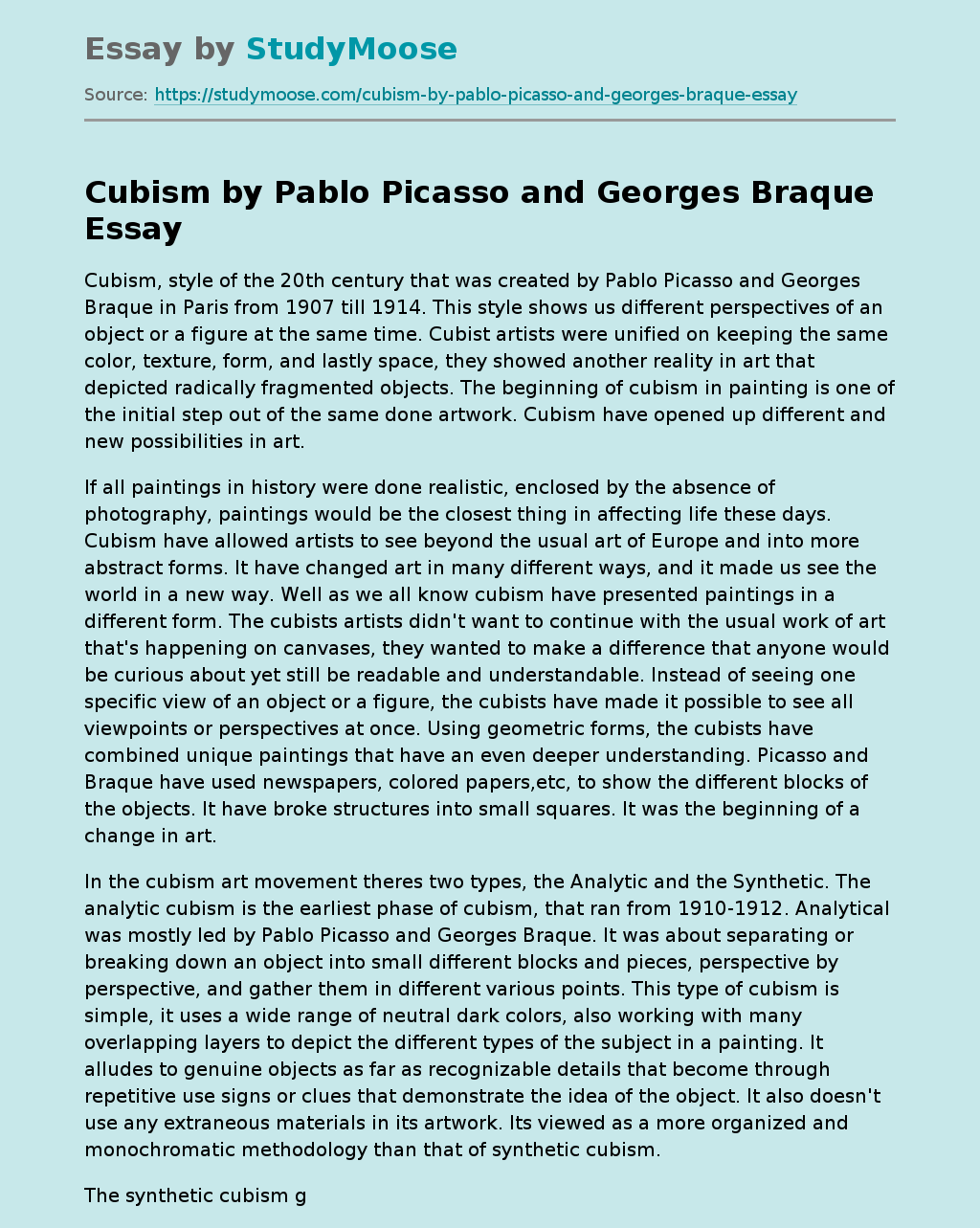