Petron Corporation (Petron) is a Philippines-based company. The Company is the refiner and marketer of petroleum products in the Philippines. As of December 31, 2010, Petron had seven subsidiaries: New Ventures Realty Corporation engaged in acquiring and developing land;

The end of the venture in the early ’60s split the marketing and refining interests of the company between Esso and Mobil.In 1973, Esso sold its business to the government which became the Philippine National Oil Company orPNOC. Subsequently, Mobil also sold its share of the refinery to PNOC.The oil refining and marketing units in PNOC were eventually merged to form Petrophil, which was later renamed as Petron.

As part of the government’s privatization program, PNOC sought a strategic partner that would give Petron a reliable supply of oil, plus access to state-of-the-art refining technology.

The result was a partnership with the world’s largest oil producer, Saudi Aramco. On February 3, 1994, PNOC and Aramco Overseas Company BV signed a share purchase agreement thatgave both a 40% stake in Petron. The remaining 20% of Petron shares were sold to the public .In May 2008, the Ashmore Group acquired Aramco’s 40% stake in Petron. Following a mandatory tender offer, an additional 10.57% was acquired by the London-based fund. The PNOC likewise sold its share to another Ashmore subsidiary. Such divestment resulted in the Ashmore Group holding approximately 90.57 percent of the outstanding shares of the company.

Mission-Vision and Values
To be the leading provider of total customer solutions in the energy sector and itsderivative businesses. We will achieve thisby: Being an integral part of our customers’lives, delivering consistent customerexperience through innovative productsandservices; Developing strategic partnership inpursuit of growth and opportunity; Leveraging our refining assets to achievecompetitive advantage; Fostering an entrepreneurial culture thatencourages teamwork, innovation andexcellence; Caring for community and theenvironment;

Conducting ourselves withprofessionalism, integrity and fairness; Promoting the best interest of all ourstakeholders.

He also holds executive and directorship positions in various SMC subsidiaries. ERIC O. RECTO- Filipino, 46 years old, is the President/Executive Director of the company since October 7, 2008.He became a director of Petron on July 31, 2008. He is a member of the Board Executive Committee and the Nomination and Compensation Committees. He is currently the Chief Executive Officer of Eastern Telecommunications Philippines, Inc. (ETPI) and Vice Chairman& President of ISM Communications Corporation, ETPIs parent company.

He is also Vice Chairman of Philweb Corporation and Alphaland Corporation. He was previously Undersecretary of the Department of Finance, in charge of both the International Finance Group and the Privatization Office. BERNARDINO R. ABES-Filipino, 79 years old, has been a non-executive Director of the company since July 2001. He is currently the Chairman of the Government Service Insurance System, following a three-year term as Chairman of the Social Security Commission. 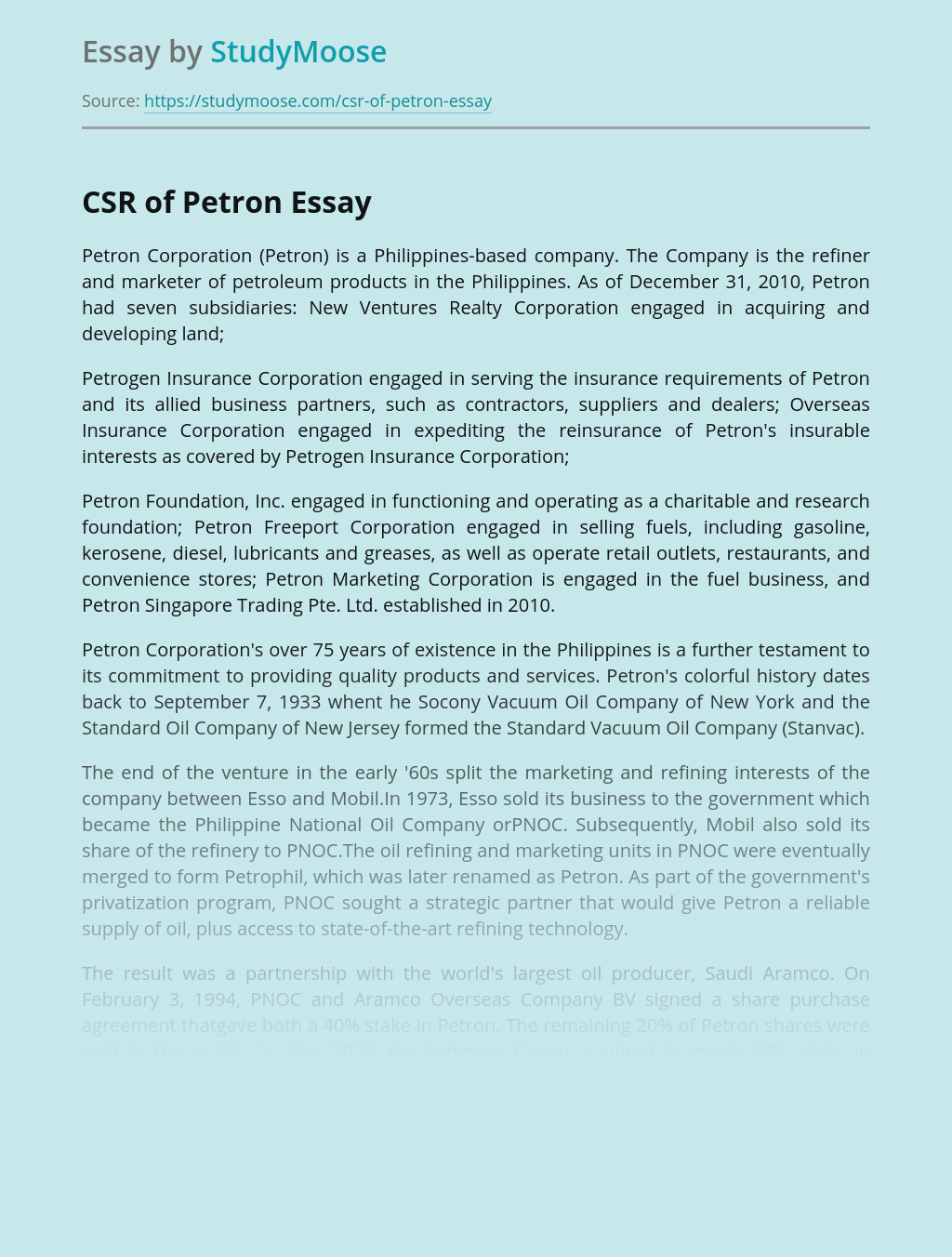 Turn in your highest-quality paper
Get a qualified writer to help you with
“ CSR of Petron ”
Get high-quality paper
Helping students since 2015
Stay Safe, Stay Original