During the late 1800 hundreds, a community of people in religious manner came together to explore the culture in a religious like, campground. As time progressed in this are, larger crowds became amass due to the increased amount of attractions imp laced in the area, drawing in large crowds well over 150,000 per season(annually). Soon after, the money scheme came into play where local entrepreneurs saw a chance to make an increased amount of money by adding small sideshows and to offer food and drink as well.

When 1890 came across, the company Crystal Beach Company was created based off the idea of the beautiful sand this beach portrayed. During the same year, the creation of the park was first scene with the addition of amusements, a new in service pier, and on the 16th of July that year, it attracted its first customers.

The height of its peak, the Crystal Beach Amusement Park left huge impacts of the way Canadian culture will forever be affected.

The years went by, and as the additions of new rides and attractions increased, so did the occupants. A large impact this park had was the increased attraction of american population with the pier in service, servicing its main boats the Canadiana and the Americana. A huge anthropological input this park had was creating a name for Crystal Beach and at the time, making us one of the number one visited places in all of Canada. Another immediate cultural implication was it made us well known, and created simple exports we can now see all around us (e.

g..logan berry), and made us well known and established with a better increase of population and different cultures we were open to.

WIth the popular demand of Crystal Beach Amusement Park in service, we can see many different psychological perspectives people had at the time. The limit of people boundaries were normally met by formal and opposed beliefs of recklessness, but with the park establishment, we can see where the became non apparent in this area. People were now given something of much more value to do, creating a lot of residual happiness amongst people living in the community, and visiting the park. People saw this as a get away and gave them something they normally wouldn’t have access to. With this attraction, people not only came to the park to enjoy what it offered, but people in the area became emotionally attached to it, becoming something they would use because of how it made them feel, and what the benefits were towards them.

Sociologically, some implications were not always as great for some with the rise of the park. The community was instantly inflicted with higher expenses of living in this area, driving many people out with the increase of population of immigrants and americans with business opportunities and investments. It did, however, create a stronger bond with those who came over from other places to see our great attraction. Also, with the park in place, people became more familiar with each other and social interaction led to a huge increase in economy of the area and the well being of it. Many business opportunities were seen and the popular demand of people required these types of places to be made to help service the area and to meet the peoples needs.

This is a very simple case on the Crystal Beach Park,as to why the demise was so inevitable. From the late 50s up, many disorderly situations occurred with partiers and the huge boot legging that took place. The area, once thriving with visitors and open business slowly saw its demise with the way the cultural advanced and the mistreatment of the park, vandalism being a huge one. Some smaller attributing factors included the heightened fear that the waters were slowly becoming un sanitary and not safe. At the tale end of 1976, the introduced a pay one price admission in response to the negligence and mistreatment also played a huge factor in its decline. Slowly, it just diminished and had less need due to larger increases of newer, popular demands of an urbanized area. So in my opinion, yes, the demise was easily predictable and inevitable! 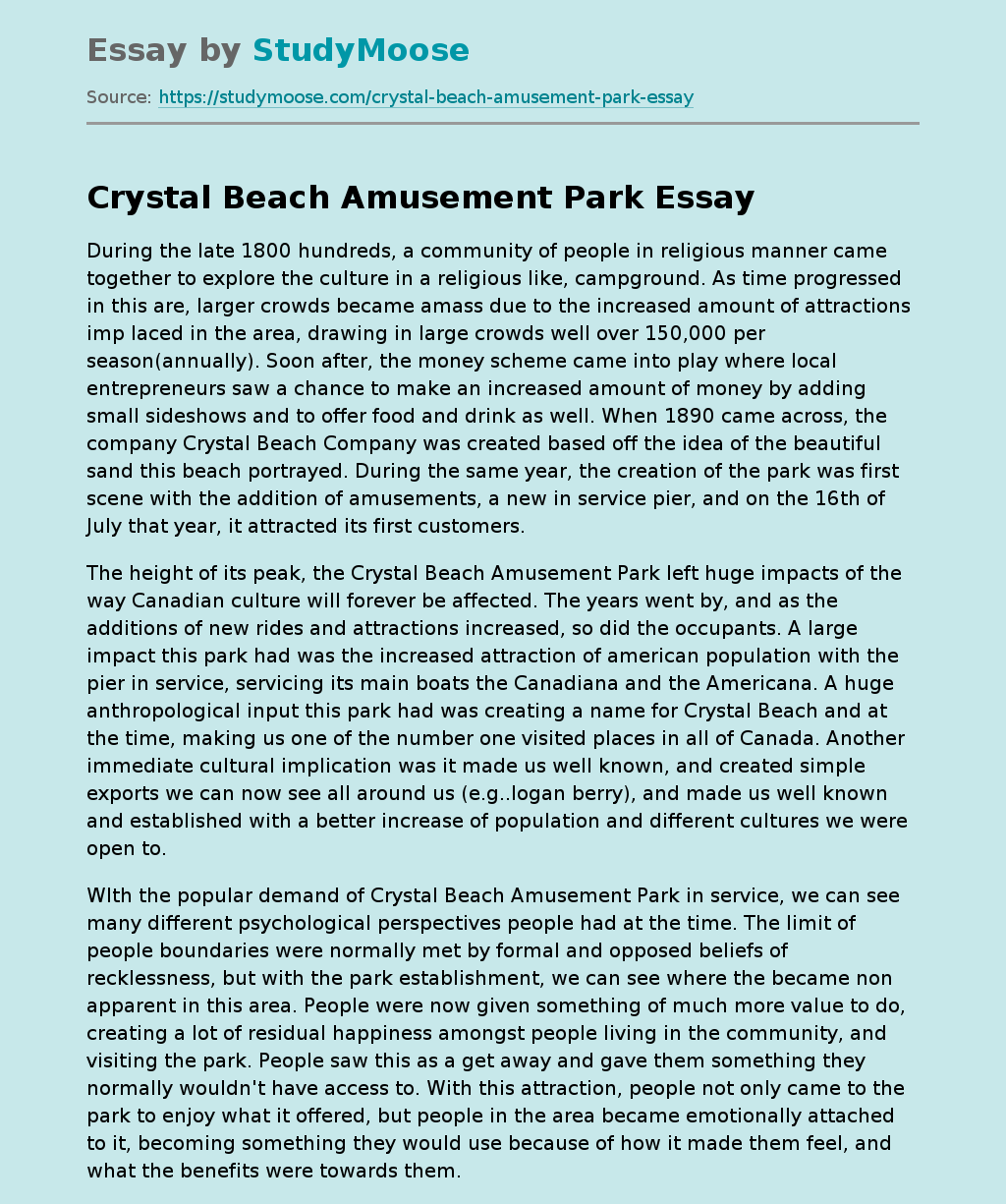