Cruelty to Animal and Animal Extinction

Everybody, and I mean everybody. Has the right to live in a peaceful and protected world.

Whether you are a type of species, or if you are of the human race. In saying that, nobody has the authority to take the lives of other humans and/or species.

Unfortunately, from my research. Within the next 15 to 40 years, it is highly likely that the animals listed below will become extinct:

Sadly, this is only about one quarter of the list of animals to be known to go extinct within the next 15 to 40 years.

Don't use plagiarized sources. Get your custom essay on
“ Cruelty to Animal and Animal Extinction ”
Get custom paper
NEW! smart matching with writer

The cause of animal extinction is because of habitat destruction, illegal hunting by humans, Exptic species, and last but not least. The 1080 poison.

Firstly, the majority of animal extinction is due to habitat loss. This is all caused by humans. As far as I know, there are two types of habitat for two different kinds of species.

Which is a forest, that is the habitat to land species. Such as… Giant Panda’s, Saola’s, African Forest Elephant and Orangutan. Fun fact: The name ‘Orangutan’ actually means “Man of the forest” in Malay language. Then there is the ocean. Which, obviously is the habitat to all sea animals such as Fish, Turtles, Dolphins, Octopus, Crabs, Squids, Sharks and many more. Another fun fact: Sharks can hear a fish swimming from up to a mile away, they can also smell one drop of blood amongst over a million drops of water.

As many as up to 30 to 50 percent of all species are possibly heading towards extinction by mid-century. The freshwater ecosystem is a home to more than 100,000 known species of not only animals, but plants as well. Fun fact: Around about 99% of all freshwater is either in the form of ice, or located in an aquifer. Now, they are one of the most endangered habitats in the world. All because of human development, climate change, and pollution.

The Entertainment Software Association, also known as The ESA strives to rescue species from the endangered list by reconstructing ecological heath till they no longer need protection. The World Wildlife organization, the WWF. Focus on saving other certain species that helps sustain other known species. They protect the wildlife, such as Rhinos, Whales, Pandas, Primates, Marine Turtles, Big Cats and Polar Bears.

According to scientists, we are currently experiencing the worst wave of species fall back since the extinction of dinosaurs over 65 million years ago. Unfortunately, the human knowledge on the variety of plant and animal life in the world or in a particular habitat, and ecosystem is occuring in a small number.

So now is the time for us to pay attention to what we will happen if we carry on dominating our nature single-minded. Will humans go extinct if all animal species go extinct ? Without worms and other types of bugs it would be near impossible to maintain soil conditions, which means no more growing food in gardens. I know the average of the world’s diet that comes out of fruits and vegetables is around 8.2%, but with all animals going extinct that means no meat. Meat, fish, milk and eggs makes up about 13.5% of the world’s average diet. With just those two that makes up around 21.7% of the world’s average diet.

This problem of animal extinction can be eliminated. Just by simply stopping with all the pollution that goes into the sea, by banning the 1080 poison, it’s simple easy things that you need to take out of your everyday doings that will help prevent animal extinction. Like recycling your rubbish, like not buying products made from endangered species, make small energy saving changes, eat less meat and more vegetables and fruits.

I hope my writing has convinced you to try practically anything that will help contribute to stopping animal extinction. Even the tiniest of contribution will help a lot more than people who are not contributing anything at all.

Cruelty to Animal and Animal Extinction. (2021, Feb 19). Retrieved from https://studymoose.com/cruelty-to-animal-and-animal-extinction-essay 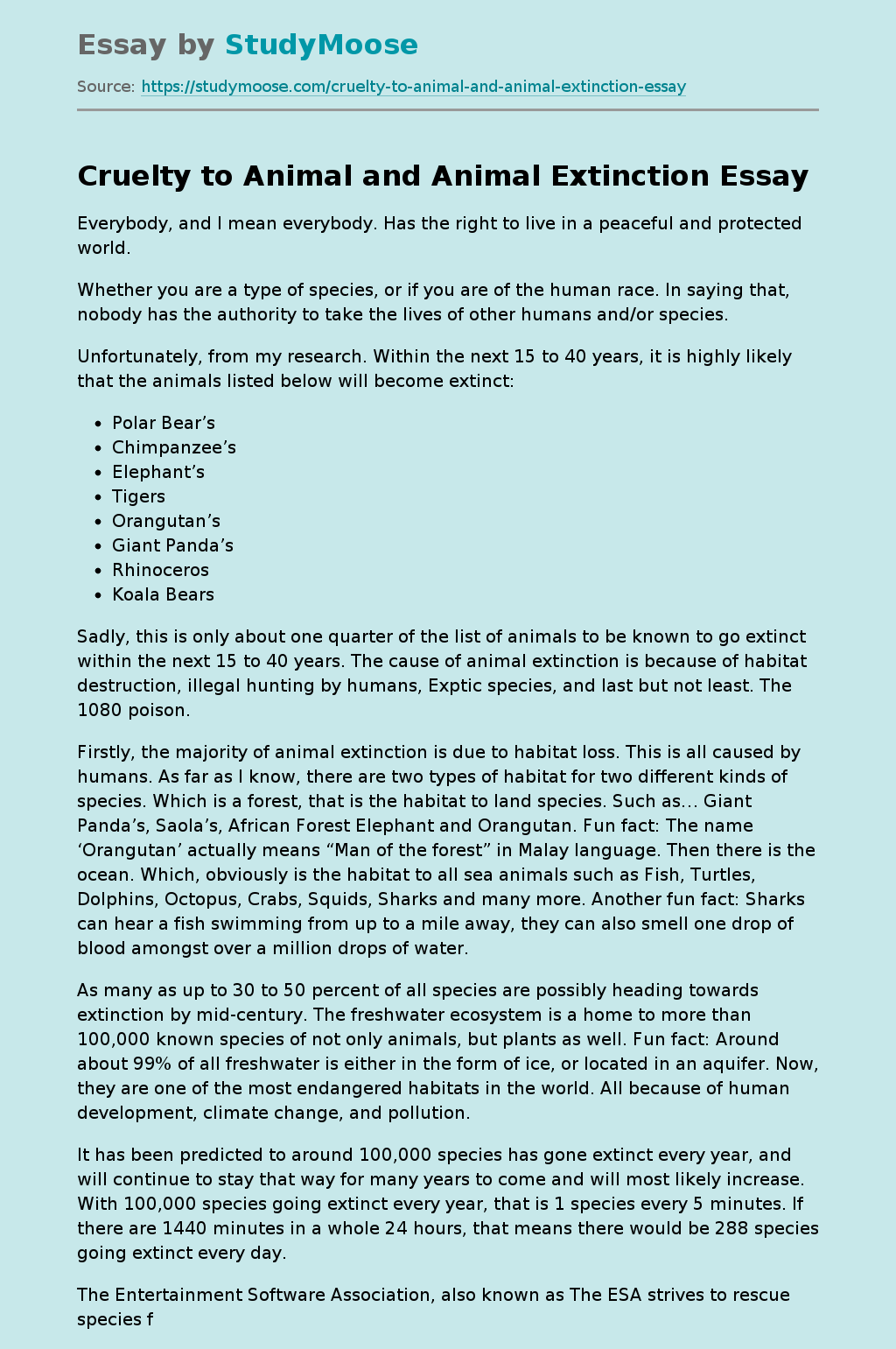