Compare the ways the distinctively visual is created in Crouching Tiger, Hidden Dragon and in one other related text of your choosing

The use of distinctively visual images allows an audience to perceive and distinguish the composer’s specific representation. From these distinctive visuals, the audience’s perceptions force them to respond in a particular way. In ‘Crouching Tiger, Hidden Dragon’, Ang Lee utilises a range of film techniques to position his audience through a combination of quiet, dramatic scenes and choreographed action sequences.

In his painting, ‘Third of May, 1808’ Fransisco Goya conveys meaning exclusively with distinctively visual techniques. Both the composers are able to effectively convey their message and immerse the responder in the different aspects of the texts.

The titular phrase “Crouching Tiger Hidden Dragon” comes from a Chinese philosophy that refers to keeping your strength hidden from others and warns that, because others may also be practising it, you never know when you’ll meet up with someone who is stronger and better than you are.

Ang Lee presents images and reflects a crateful masterful synthesis of various forms of Chinese mythology and Taoist Philosophy. Crouching Tiger Hidden Dragon elaborates on partly through the use of the same fight choreographer, Yuen Wo Ping. In the scene where Jen steals the sword has a camera shot of an establishing shot, long shot, and overhead shot. It has a clicking sound and the lighting is shadowy distinctively suggesting elements of suspicion, danger and anticipation. Its lighting is insufficient to symbolise the dark side and the suspicion.

Audiences are able to feel the suspense throughout the fighting scene. In Crouching Tiger, Hidden Dragon, it has a scene which has Shu Lien and Jen order to the sword and fight with each other. In this scene, the location is in the courtyard of the house, which means it is like a chamber of secret. It represents that both of them must have one will be die. During their fight, Lee shot the scene using the low key lighting, this is in order to bring weapons spark generated when the collision. This allows the scene to create greater tension with the use of darkness diverting the audience expectations. For the camera movement, firstly it is a long shot to show the location and they are going to fight, and then it use a lot of close up, over shoulder and extreme close up to illustrate how they fight with using different Kong Fu and weapons, during they are fighting, it also has some bird s eye view shot to show how intense of their fight, because it also show the ground fault of the weapons and the struggle traces shows the suspension.

As a distinctively visual technique, audiences are able to feel the suspense. The way in the shooting, the director Ang Lee has done all the details in every possible way. In the light text effect, he spent most of the low key lighting to keep the mystery of kung fu; the lens shooting, he spent a lot of The third-person perspective and two shot make the audience appreciate the traditional Chinese martial arts, and he can also take care while a lot of details, such as eye contact play against the two sides, the audience can understand the meaning of what they want to say without the dialogue. The scenes is showing a back and forth between two characters staring at each other, then that is most likely the use of the shot-reverse-shot technique.

Third of May 1808, painted by Fransisco Goya was considered ground breaking and revolutionary as it presents the horrors of war that had previously been openly illustrated. The painting focuses on one man, illuminated in white light in the middle of the painting, arms held out to the sides, facing a French firing squad. Hi slain companions litter the ground. It is thus considered one of the first pieces of modern art. Through the use of distinctively visual techniques has explored themes of irrationality, folly and corruption representing in the painting. He has made an image of actual historical events, but enhances them for maximum dramatic effect. The recognizable architecture of the city in the background lends immediacy to the scene. But it is the figures to the left of the composition that demands the viewers’ attention.

The main figure, dressed in white, practically glows. Holding out his arms in an unmistakable reference to the crucified Christ, he appears as a heroic martyr. This dramatic lighting technique or chiaroscuro can be seen in the central figure or focal point-the young Spanish man with his arms outstretched. While the faceless French soldiers on the opposite side are rendered almost inhuman, ill-fated Spanish rebels elicit both sympathy for their suffering and respect for their sacrifice. The mood of the painting is very bleak and sombre.

The colours which the artist has chosen are earth tones, and there is a strong overall contrast of dark and light. The implied lines of the gun lead the viewer’s eye to the focal point. His outstretched arms form a “V” line. This line is reiterated in the collar and pants of the man. In contrast we see the faces of the Spanish countrymen; we see their fear, pain, defiance, and belief. The light and dark contrast of the line in the sand separates the two groups spatially. There is also a feeling of entrapment created by the line of the mountain that holds the Spanish countrymen into the space. 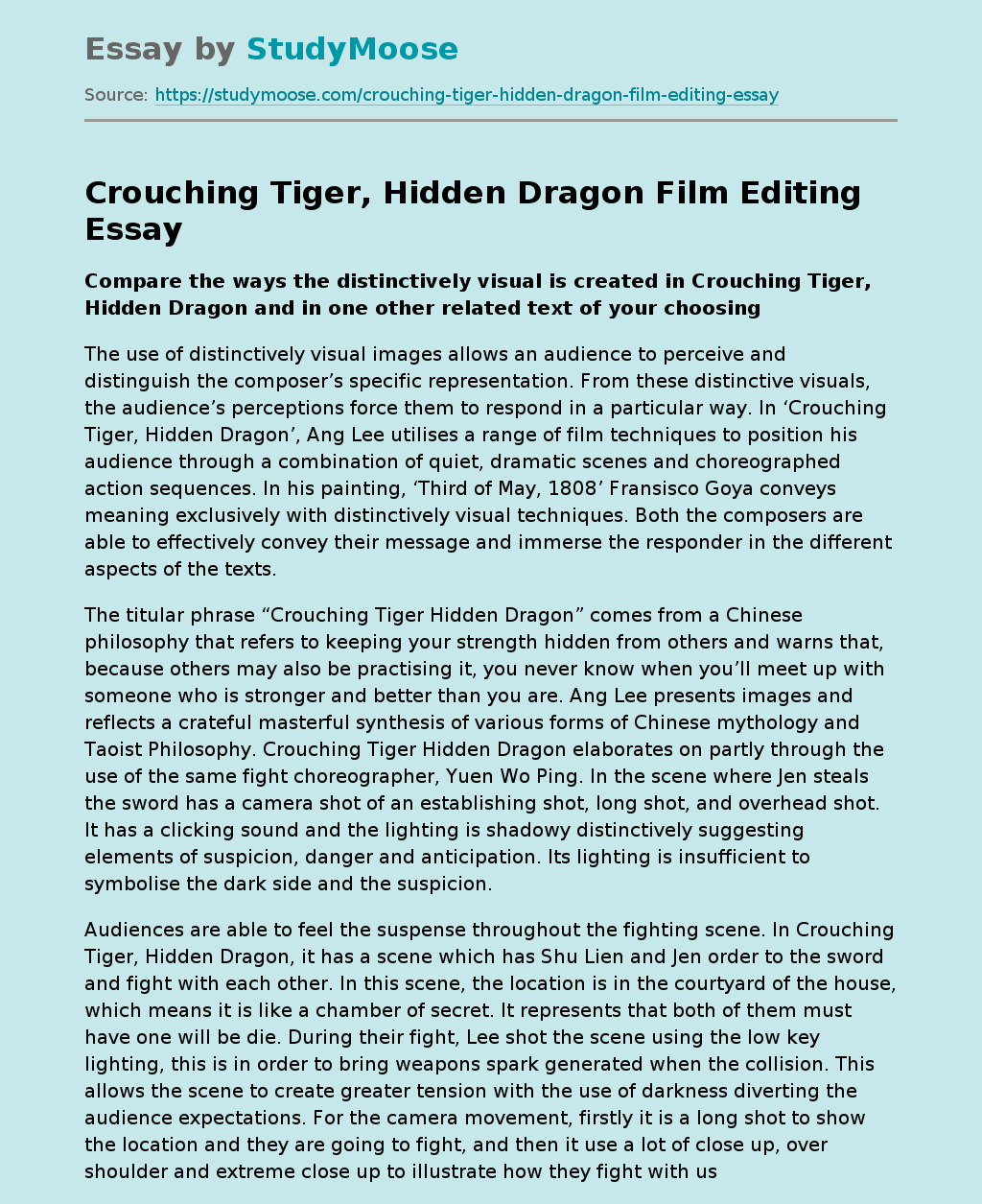