After the division of Korea in World War II, North Korea introduced communism into their country aiming to create a country where everyone was equally wealthy. However, unlike the expectation, NK’s national plans didn’t work out well, and North Koreans started to suffer from political oppression and chronic food shortages. North Koreans who could not stand the situation in their home country started fleeing from North to South Korea. first broadcast in July 2007 reveals the 10 day journey of the North Korean defectors who cross several border to settle in South Korea.

Don't use plagiarized sources. Get your custom essay on
“ Crossing Heaven’s Border ”
Get custom paper
NEW! smart matching with writer

Often, defectors temporarily settle in Shenyang to raise money before they smuggle into South.

Some women defectors are even tempted into sex industries, and they often lose their opportunity to reach South Korea. Those who successfully depart Shenyang ride on an illegal bus for 10 hours that takes them to Beijing. In Beijing, group of defectors spread out themselves and melt into the crowd to avoid authority until they board a train to Kunming. On the train, the defectors hide themselves from Chinese officials’ inspection by either leaving their seat or pretending to sleep when the officials are around.

After three tenth days, they arrive in Kunming. From there, they face another 8 hour drive through the mountains toward the jungle border with Laos.

Even for North Korean defectors who are chastened by adversities, crossing the jungle, which takes 18 hours on foot, is strenuous. Finally, after they cross another border to Thailand from Laos, the defectors can apply for asylum at the South Korean embassy in Bangkok, and their long arduous trip ends there (Crossing Heaven’s Border, PBS). At the embassy, we interviewed a 23-year-old North Korean refugee Lee Ok Kyung, who was waiting for her South Korean visa to be issued. Lee recalled her memory of childhood in the North as a nightmare.“Everyone around me was struggling to find food so dying from hunger wasn’t anything new to us” she said. “My parents ran their pants off on farms day and night, but they were paid much less than the amount of work they did because all their money was sent to the supreme leader Kim Jong Il.

However, no one complained about this because everyone was brainwashed that Kim was their demigod of North Korea. Unlike my neighbors, however, I knew that Kim and the high officials were deceiving us. I left North Korea because I was eager to free myself from suppression of the North Korean government. From my respect, North Korea was a heavenly country without any future or freedom. ” Until now, many of North Koreans risk their lives in the hope of resettling in South Korea, a country now home to more than 23,500 defectors. However, against the refugee’s expectation, life in a new country is not easy. Many find themselves unable to cope with the faster pace of life in the South, and they are often looked down upon by their Southern neighbors. Nevertheless, North Korean refugees take such adversities lying down because they have a desperate bid for freedom that can only be acquired by crossing the border. 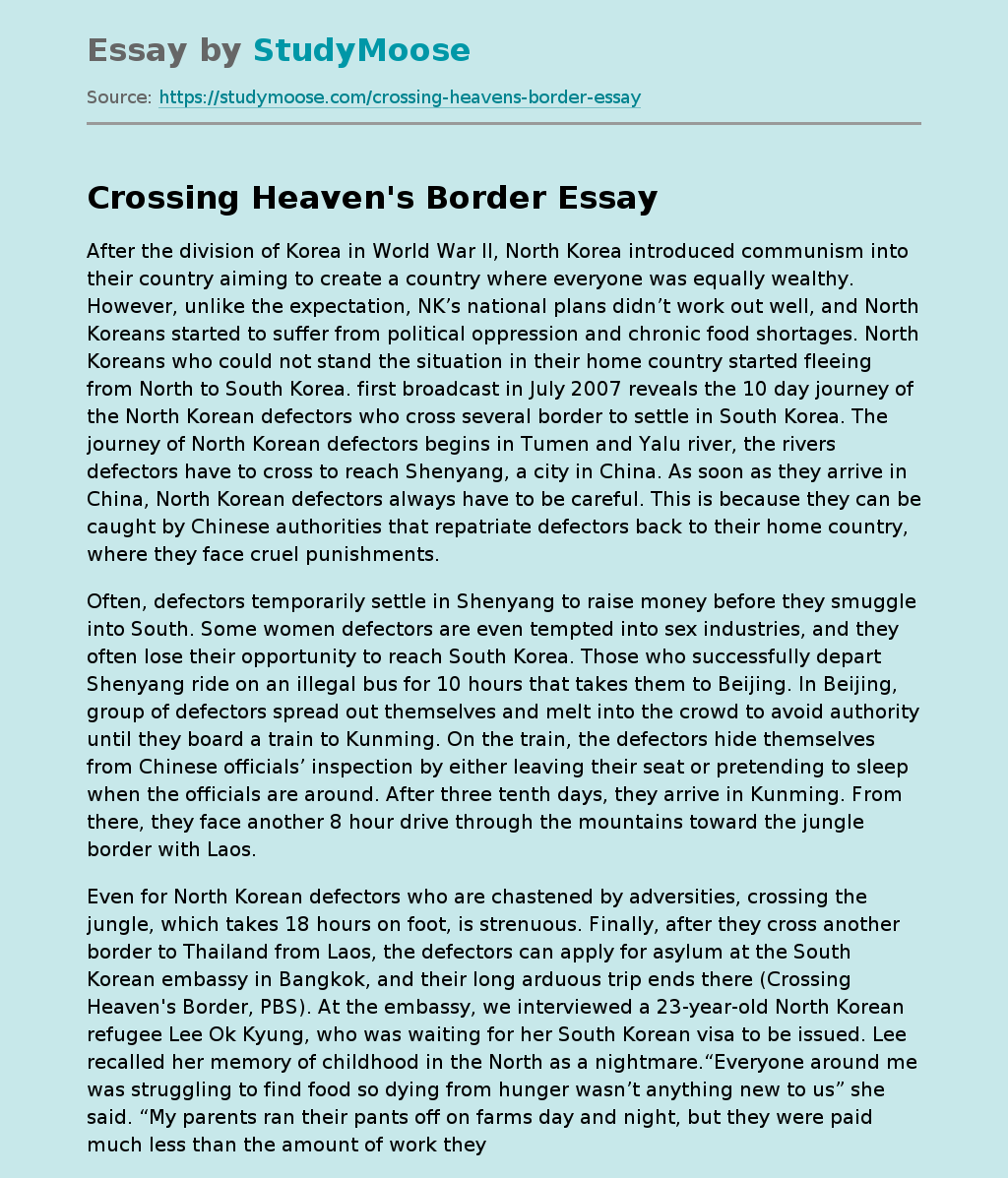