Don't use plagiarized sources.
Get Your Custom Essay on Cross-Cultural Management in China Just from $13,9/Page

Furthermore, in recent years, emphases have been shifted from examining the effects of culture on single variables to examining the relationships among same and different level of variables. The research we reviewed encompasses both international comparative research and intercultural research in multinational organizations.

Nowadays, globalization is changing behavior, team composition and team dynamics in the workplace. Businesses of all sizes are increasingly seeing the entirety of the world as a source of business opportunities and one interconnected economy.

Organizations that remain ‘‘domestic-only’’ are already falling behind their multinational competitor counterparts (Cullen, 2002). With the progressive globalization of the workforce, businesses are more and more finding themselves working more often with culturally diverse employees and business partners, an experience that has proven to be rewarding and yet challenging.

Actually, the impact of cultural diversity on team productivity and organizational culture is not clear and yet doing so is becoming more the norm than it is the exception. Someone suggests that teams characterized by demographic heterogeneity have advantages over teams who are not demographically diverse such as added ideas, approaches, perspectives, however, others suggests that the multicultural aspect of a team creates potential for added conflict. For example, the same silence or increase in personal space in one context or culture may be seen as respectful and constructive, the same might be viewed as non-participatory and disrespectful in another.

When we need to study cross-culture management, we need to know what culture is. To make it simple, Culture acts as an external source of influence on employee behaviors on daily personal lives. It can consequently influence each person’s behavior within the organization, since each person brings another piece into the workplace. Collectively, the impact of culture on each individual creates a change in the culture of the organization itself. Understanding culture is important to multinational companies and managers to be prepared to compete with firms from other countries.

In China, a critical issue about culture is that there are competing ideologies including traditional culture from the ancient past, ideologies from the Communist/socialist era of the mid-twentieth century and the new ideology of market socialism. Traditional Chinese culture is highly influenced by the principle of Confucianism, which emphasizes hierarchical interpersonal relationships. The other leading belief is developed by Lao Zi, which emphasizes harmony in which leaders care for followers, respect tradition, exhibit morality and live in harmony. More recently, Chinese culture has been influenced by the political philosophies of socialism and communism. The typical principle of this political philosophy is egalitarianism rather than elitism. Under this culture, followers are expected to follow the decision of leadership strictly, and leadership is more transactional.

Comparative studies on cultural values, Author found that five factors in Chinese trait terms. Chinese are chiefly distinguished from Americans by their low extraversion scores. On agreeableness items, Chinese score high on straightforwardness and compliance, low on altruism. Chinese generally score within the average range on facets of the other domains, whereas in collectivist societies, harmony with in-group members is a more central goal. In comparison to Americans, Chinese have a more external locus of control.

Therefore, we could conclude that among Americans, the more adaptive response to stress may involve actively and effectually accruing and employing support resources. The Chinese, who expect self-discipline from those with high education and high social status, may prescribe more self-directed coping strategies rather than seeking more help. Researchers conducting cross-national generality of the Big Five factors failed to find traits that match those found in China, but additional traits were identified: relatedness. Chinese are also found more particularistic than Americans or other Westerners.

Guanxi is used to refer to a special relationship that develops between members within a team. It is difficult to find an equivalent English word to accurately express the meaning of guanxi. guanxi is ‘‘a network of personally defined reciprocal bonds.’’ Guanxi is a special kind of relationship of both obligation and reciprocity. In China, within a team or an organization, the distinction between the in-group and the out-group is particularly important. In-group members are those with whom one has strong guanxi .

Guanxi links two individuals to enable a social interaction and exchange. For example, when one person offers a favor to another, the recipient must do an even bigger favor for him/her later. In continuing such a relationship, both people will benefit, and if the reciprocal relationship goes on and on, guanxi between them will be developed. Doing business in China is greatly influenced by guanxi since Chinese managers use their personal guanxi more widely to exchange information, negotiate with planning authorities and accelerate decision-making processes than do managers from Western firms.

Effects of individual characteristics on organizational outcomes Numerous cross-cultural studies have been done on the psychological characteristics and processes that link individuals to the organizations and nations, more specifically, organizational commitment (OC), psychological contract, organizational justice and organizational citizenship behavior (OCB). Some researcher compared 116 Chinese managers of SOEs in mainland China with 109 US managers and found that the Chinese were more likely than their US counterparts to define OCB as part of their job. They tested the moderating effects of cultural values on relationships with Chinese samples, and found that power distance had a stronger and more consistent moderating effect on relationships than did Chinese traditionalist.

Studies have indicated that team members in individualistic and collectivistic national cultures react differently to some organizational practices, such as team members’ attitude and behaviors. Earley found that managers from collectivistic cultures worked better in a group, but did not perform any better than managers from individualistic cultures. Some research found that the Chinese who learned that they had performed better than their in-group maintained their positive evaluations of fellow in-group members to protect their group’s image. For example, that Chinese managers shared significantly less knowledge with recipients outside their in-group compared with US managers. Gibson argued that Hong Kong students are more likely to consider group efficacy as being meaningful. Liu and Davis developed a team performance model of Chinese setting by examining the relationships among 11 team process variables.

The most important factors that influence international business are cultural environment, strategies of the organization, and economic conditions of the host country and the labor market of the host country. There are four major factors affecting cross-cultural management: cultural difference, interventions concerning future contingencies, communication as well as adjustment on back-cultural shock.

• develop cultural sensitivities;
• recognize cultural complexity;
• consider themselves as culture messenger;
• be patient and understanding;
• have realistic expectations; and
• have the courage to experience culture shock.

Based on cross-cultural research, cross-cultural training should include personal space (whether someone is close of distant from you when talking); terminology/ language differences (and tone of voice); body language/mannerisms/gestures; hierarchy of leadership; physical dress/wardrobe; determination of leadership; personality characteristics; providing positive and negative feedback (how, when, and is it done publicly or privately).

Finally, it is a fact that cross-cultural management practices will benefit greatly from cross-cultural communication and cross-cultural training. To build effective training system, careful training needs analysis should be done to ensure clear objective and content of training. In addition, the context of cross-cultural interactions, individual difference among trainees and the evaluation of the training should also be taken into consideration.

I am curious when the cross-culture conflict happen inside the company, what method should be a solution. In the article, it does not mention that. Is the local worker right or the foreign worker right? What is the base to decide that? I think it is hard to say, whatever the company chose, there also has a bad side for different culture. I think there should not have a win-win method to solve the cross-cultural conflict. I have some question to ask the worker. First, what will they do when they meet the cultural conflict? What is the foundation of training? What kind of training will they apply?

I interview two working managers and summary their answers, they said they would suggest the company the issue the different culture book to worker to know what is correct to treat their co-workers, or make a small group with different culture people to take about themselves. They also said that no idea for the solution for the culture conflict because it depends on how to view the conflict. When you stand on the local worker side, the local worker is right, otherwise, it is wrong. 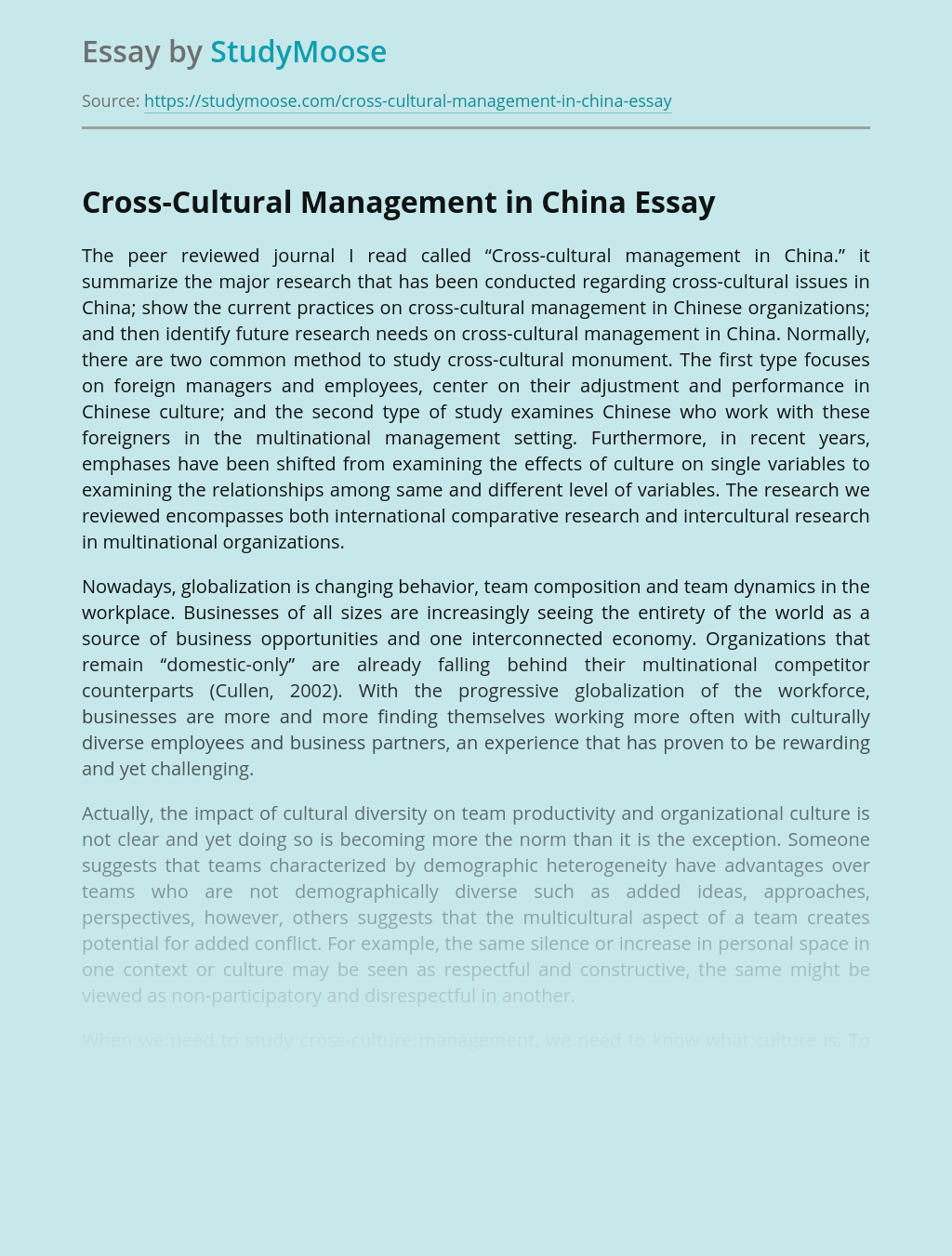 Rate this post Yang’s story crosses the period over three different decades. She was from an innovative cadre’s household. After investing her early life in Switzerland, she signed up with the Beijing 101 Middle School, which is a high school for elites. After the Cultural Revolution broke out, she actively took part in Red Guard...

Rate this post Jared’s Diamond’s “Guns, Germ and Steel” is an historical narrative that focuses on alternate explanations to the rise and fall of civilizations and the development of cultures and societies by tracing evolutions and nuances in world and human history dating as far back as 13,000 years ago to the present. It is...

Get Essay
Hofstede Comparison of Germany and China

Rate this post Hofstede’s five dimensions are a useful tool to give someone an insight of different cultures. These elements give a country’s behaviour tendencies rather than an exact prescription. There are weaknesses to Hofstede’s Five Dimension theory as it may too easily encourage stereotyping. Even in countries as small as the UK, not all...

Rate this post Race has actually been a root of a lot of discords and wars for lots of centuries. From the past to the present, the world has actually been divided into various sides just because of this. Nevertheless, the conflict that is brought on by ethnicity is not just between people. Oftentimes, it...