Don't use plagiarized sources.
Get Your Custom Essay on Cross cultural communication Just from $13,9/Page

The fifth one states that a person should remember that learning what is normal in the culture the are communicating with helps you understand that group. The last principal states that as long as you see others as friendly and cooperative barriers will easily be broken down (Cheesebro, O’Connor, & Rios, Chapter Chapter 3, Cultural Diversity, 2010).

I chose to write about Hispanics. There healthcare experience is similar to African American, which is my race.

First there is the language barrier. They speak another language and it can sometimes be hard to explain things when there is not a translator present. Things get lost in translation. Another issue is that they don’t have healthcare. They don’t have insurance so they don’t go to a doctor and in turn they have poor health (Bzostek, Goldman, & Pebley, 2007).

When it comes to communications, there are many barriers. Providers communicate differently when it comes to Hispanics. Studies have shown that when providers deal with the Spanish speaking patients they ask less open ended question and probes for patient understanding because of the language barrier (Mayo, Windsor, Sundarwaran & Crew 2007). A seconds study states that when providers relied on interpreters for communicating with their patients, but lack of availability of the interpreters and patient waiting were reported as barriers in using interpreters effectively (Mayo, Windsor, Sundarwaran & Crew 2007). This barrier led providers to turn to English speaking family n members and bilingual staff who made the communication dull (Mayo, Windsor, Sundarwaran & Crew 2007).

In my opinion these are just some of the barriers that stand in between Hispanics and non-Hispanic providers. To me language is the most common one. When people have this barriere they are less likely to want to communicate because they don’t thing the other party will understand the message they are trying to send. So if they do communicate there will be a lack of enthusiasm and the message will not come across correctly. 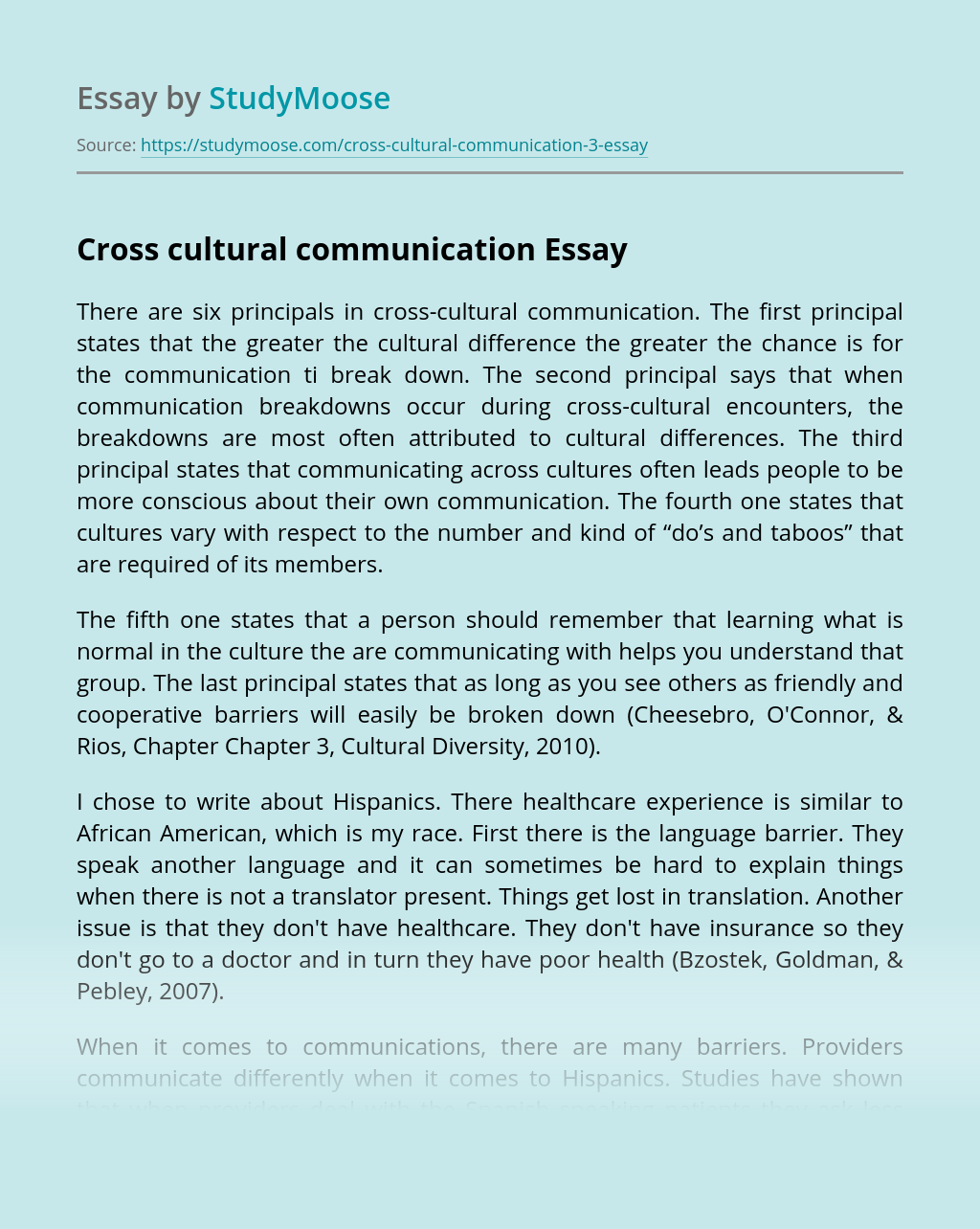 Effective communication is essential for any Nursery settings too succeed. Its important to maintain effective communication within the nursery as this enables an open and honest approach between parents, children and staff. By using a simple tool called the 4Cs Model, which stands for Comprehension, Connection, Credibility, and Contagiousness are simple but effective way off...

In sports broadcasting, a sports commentator gives a running commentary in real life or real time about a sport. Usually, this is done during a live broadcast on television. The broadcast is normally a voiceover and the main commentator is rarely seen on screen if at all. In American English, other common terms for a...

Get Essay
Social Networking vs. Face to Face Communication

You are working as a human service worker at a local United Way agency that serves several multicultural clients. In addition to the multicultural aspect, the agency also serves children, women, the elderly, and the homeless. Your manager has asked you to decide the best communication approach for each of these clients. Answer the following...

Show How and When to Seek Advice About Communication

Communication Communication is important in a work setting because it expresses the needs and ideas that need to be shared amongst team members and also children. Socialising and sharing work related information/ideas can express feelings and opinions to one another. Communicating amongst the team makes the team effective by bonding and expressing ideas towards each...