“We are members of one body, we are responsible for each other. ” There are 2 genres of which J. B Priestley has chosen to include one of which is A detective thriller and the other A morality play. A Detective Thriller There are many things expected from a detective thriller. Most stories contain the most essential things like a victim, a detective and one or many perpetrators of the crime at hand. Some of the other things that may be included but are not as essential could be twists in the story, connections between certain people and the crime at hand, revelations of information and so on.

Don't use plagiarized sources. Get your custom essay on
“ Crofts and Birlings ”
Get custom paper
NEW! smart matching with writer

A very good detective thriller will keep the audience on their toes throughout; it is highly unlikely to become boring due to the twists, connections and revelations, as well as the many techniques used in detective stories to keep you on edge all the time like a climax followed shortly after by an anticlimax and the use of an ending with cliff hangers.

A lot of detective thrillers tend to be ‘whodunits’ where the main objective is to find out who did it. Another really popular trend is where a vital piece of information is uncovered right at the end and then it is the job of the detective to interrogate his suspects.

Priestley uses most if not all of these in ‘An Inspector Calls’ where the inspector takes the place of the detective and the characters are the suspects, waiting to be convicted. A Morality Play 7 Deadly Sins Mr Birling: Mr Birling is the culprit of many of the 7 deadly or capital sins as they are otherwise known, the one that I mainly feel that he has been apart of is covertousness.

This occurs when he is in the middle of a speech to his son Eric and future son in law Gerald Croft, about having a good woman on your arm and having a successful business (Act 1 Page 4).

“Crofts and Birlings are no longer competing but are working together for lower costs and higher prices. ” Mr Birling also exhibits the sin of pride this is evident when he is introducing himself to the inspector and is trying to present himself as a higher-class person than what he actually is (Act 1 Page 11). “I was an alderman for years-and I was Lord mayor 2 years ago-and I’m on the bench. ” He has also shown certain signs of anger (Act 2 Page 33). This was when the inspector was trying to explain to Mr Birling that Eric would have to wait his turn to be spoken to (he was very persistent).

Mr Birling did not like this and made this quote, “Now look here inspector, I’ve told you before, I don’t like your tone. ” Mrs Birling: As we move on to Mrs Birling she too encounters a fair number of the sins, the one that she seems to exhibit the most is PRIDE there are many different examples of this: 1. (Act 2 Page 30) This was when Sheila was trying to explain to her mother that no matter how high she tries to build a defensive wall the inspector will always get the relevant information that he is searching for.

The inspector agreed with Sheila and told Mrs Birling that her daughter was quite right. Mrs Birling became rather annoyed and made this quote to the inspector, “That-I consider-is a trifle impertinent, inspector! ” 2. Another Prime example of Mrs Birlings Pride is (Act 2 Page 44). When the inspector is questioning Mrs Birling as to her reasoning for turning Eva Smith away when she was in sheer desperation. “I did nothing I’m ashamed of or that won’t bear investigation”. 3. Mrs Birling then went on to say, “Your quite wrong to suppose that I regret what I did” (Act 2 Page 47)

This was the time where Mrs Birling was trying to tell the inspector that Eva Smith/Daisy Renton was telling a pack of lies to her and that she had no choice but to turn her away, to her it did not matter that she was pregnant and had no where else to go. 4. After the last quote where she was saying that the father of Eva Smiths baby should be made an example of and that his parents should be thoroughly ashamed, she finds out that it is her own son Eric that is the babies father and that he also stole money from his fathers work to help her on her way. (Act 3 Page 53)

As soon as Mrs Birling was made aware that it was her son who got Eva Smith pregnant her whole view about the matter dramatically changed she didn’t want her son to be made an example of, as she didn’t want the family name bought to shame. (Act 3 Page 55) (Very distressed) “No-Eric-please-I didn’t know-I didn’t understand” Not only did Mrs Birling show major signs of pride she also showed signs of anger as well. The first time that Mrs Birling became really agetated was when the inspector asked her if she would mind answering a few questions, from the way she was speaking she did not sound best pleased.(Act 2 Page 33)

“Well come along then-what is it you want to know? ” Later on in the play she started to get angry with the inspector again, (Act 2 Page 44). She became very annoyed when the Inspector was questioning her as to why she refused to help Eva Smith it was clear that Mrs Birling did not feel that she had to justify herself to him yet he was exceedingly persistent, therefore in the end she gave him an answer. “I didn’t like her Manner. ”

Sheila Birling: Sheila in my opinion acted the most responsibly to what the inspector had to say to her especially towards the end of the play, however she did fall victim to one of the 7 deadly sins and that sin was envy (Act 1 Page 24). Sheila began to tell the story of how she came to meet up with Eva Smith and why she felt such a need to get her sacked from the only job that she had ever come to love. (Inspector) “I suppose it could be said that you were jealous of her” (Sheila) “Yes, I suppose so”

That was the only time that I felt that Sheila encountered one of the sins apart from that one detail which did actually play a big part she was not an intenti0onally bad person. Gerald Croft: Gerald was Sheila’s fianci?? e who came to meet Eva Smith who by that time had changed her name to Daisy Renton at the palace bar (a place where prostitutes could be picked up) he then started a sexual relationship with her. An Example of how he came to fall for lust (Act 2 Page 37) (Inspector) “But she became your mistress? ” (Gerald) “Yes. I suppose it was inevitable, she was young, pretty and warm hearted-and intensely grateful.

I became at once the most important person in her life” Not only did Gerald become lustful he also showed us that he was part of convertousnessas well. (Act 1 Page 4) This was when Mr Birling was making his speech about Crofts limited and Birlings Company coming together as 1 business. (Mr Birling) “For lower costs and higher prices” (Gerald) “Hear, hear! And I think that my father would agree to that. ” Eric Birling: Eric in my opinion is the worst person out of the whole family to fall a victim of the sins, I suppose in a way the lustful feeling that came over him may be related to the excessive alcohol of which he consumes.

The first time that he experienced lust was when he met Daisy Renton in the palace bar. From then on the lust that he was feeling could have turned to anger if Daisy had not agreed to let him in her apartment after they left the bar. (Act 3 Page51) (Inspector) “You went with her to the lodgings that night? ” (Eric) “Yes, I insisted-it seems. I’m not very clear about it but afterwards she told me that she didn’t want me to go in but that-well I was in a state where a chap easily turns nasty-I threatened to make a row. “ 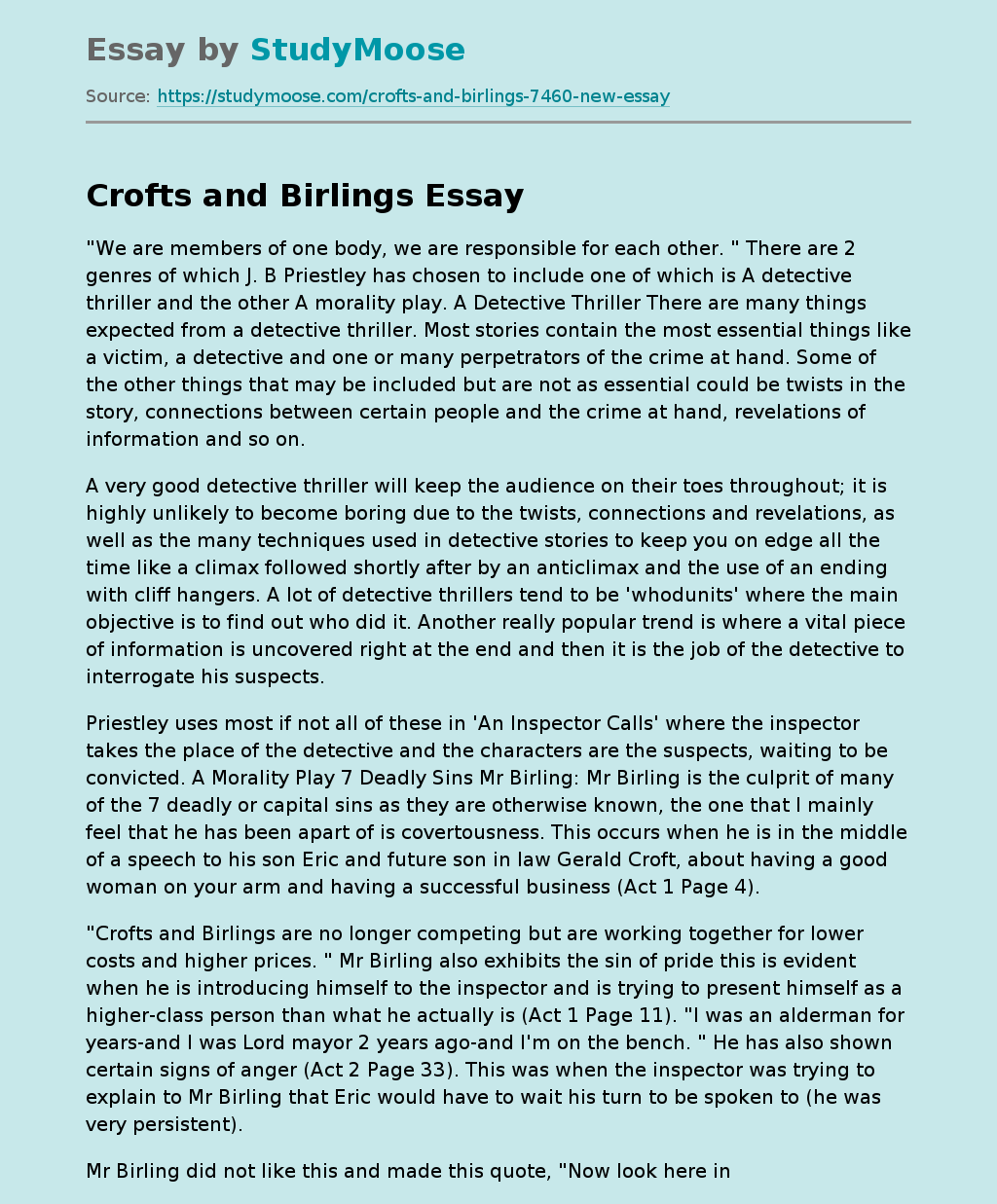