Critique on Genetic Engineering in Humans

Hunter Moff is a young six year old. At first glance he seems like any other child, he loves swimming, baseball and rollerblading. Hunter Moff will probably never grow as old as most of the students in this room. Hunter was diagnosed with a rare, life threatening disease known as the Sanfilippo Syndrome. This genetic disorder leads to the deterioration of the body and mind. As we continue to grow and develop, Hunter will grow the opposite way, he will continue to lose more and more control of his actions until he reaches the mental capacity of a newborn.

Don't use plagiarized sources. Get your custom essay on
“ Critique on Genetic Engineering in Humans ”
Get custom paper
NEW! smart matching with writer

Millions of children all around the world are diagnosed with chronic or life threatening diseases. The solution is simple, genetic engineering. After much research, I have gathered all the information I need to give you a thorough but concise explanation of the advantages of genetic engineering in humans. Although this may not seem important now genetic engineering is becoming a more and more debated topic, especially with the advancements in technology like CRISPR.

By the time you are all adults, you might be having to make the choice over whether or not you are going to be genetically modifying your child. Overall, genetic engineering in humans should be an available resource because it could eliminate life threatening illnesses in unborn youth, produce a longer lifespan in humans with the elimination of disease, and cure chronic illnesses in adults. Firstly, how can we use genetic engineering to ensure the birth of a happy, healthy child?

Arguably the most important reason behind genetic engineering in humans is the elimination of disease in unborn children.

An overwhelming two thirds of the class responded through survey that they think genetic engineering should be used to cure life threatening disease in youth, yet only one forth of you believed that genetic engineering should be used to eliminate ANY disease in unborn children. Many children are born with diseases that are not life threatening but really have a great impact on their lives. For example, Autism Speaks, “estimates autism’s prevalence as 1 in 59 children in the United States”. Autism is a genetic disease that affects millions of children around the world. Although this disease is not life threatening, it gives a huge disadvantage to those who have it because it is characterized by increased challenge in behavior, speech, social skills, and overall communication with others. In addition, diseases like these that are not life threatening often require thousands of dollars in surgeries and doctors visits. For instance, haemochromatosis is a disease that causes to to absorb too much iron which weakens your organs. Especially in countries in the United States, health care is very expensive. The presence of diseases like this one results in a lifetime of hospital visits and can be financially impossible in some families which can lead to a very difficult life for the child, or even the child being taken away from the parents. Over 90% of the people in this class responded that they believe that genetic engineering will totally or partially take away from what makes an individual unique. To this I respond, a person is not defined by their illness and physical characteristics. The genetic modification of the health of a unborn zygote has no correlation with said child’s intelligence levels, personality traits, thoughts, opinions, etc. If anything, the elimination of an illness from a person’s life, only gives them a greater opportunity to truly express who they are without the weight of daily pain, medical finances, and overall limitation. So while genetic engineering can cure genetic diseases in youth, can it really be the solution to the elimination of disease?

The answer is yes, and it has already been done in some places. When asked on the survey what is the biggest problem with genetic engineering, 25% answered that it is unnatural. There is actually a group of people west of the Sahara desert located in Africa, who seem to have developed an immunity to the disease malaria. This is a natural development of the genome in the people of this population. This change in the genetic makeup over generations, is was we call evolution. In 2016, there were over 216 million cases of malaria worldwide. If scientists were able to clone the unique PKLR genes in those humans, they could possibly transfer it into people living in places where malaria is a big problem. Evolution is something that occurs naturally and there have been many cases of evolution in the world. The only problem with evolution is that it takes sometimes over 10,000 years to really take affect. Genetically engineering genes that give immunity to different diseases and illnesses, would only speed up a process that occurs naturally. In addition, eliminating disease from the world through immunity, would result in drastically lengthened lifespans. Eradicating sickness from a person’s life, would only result in a healthier body that would be able to provide most use for a longer duration, since your organs and tissues wouldn’t age as quickly. This could provide an answer to solving cancer. Cancer is caused by a mutation to the genes in your body, meaning it is located in your DNA. A virus could be used as a vector to deliver a gene to the cancer cells, and genetically manipulate them beyond recognition, causing the cell to self destruct in order to avoid reproducing, effectively eliminating the cancer cell and the further spreading of the cancer throughout the body. This could even lead to the termination of chronic diseases in already living adults.

Again according to the Centers for Disease Control and Prevention, over 100 million adults suffer from at least one chronic disease. Take acquired immunodeficiency syndrome or AIDS as an example. AIDS is caused by the human immunodeficiency virus or HIV which can be defeated with the use of genetic engineering. The National Academic Press remarks, “Some of the functions required by viruses for their replication are expressed in most cells, some only in dividing cells, and some only in highly differentiated cells”. This means, by sending a genetically modified virus into the body, it could express the “cellular gene necessary for the survival of the infected cell” as stated by the National Academic Press. This would give the T cells in the immune system protection against the HIV virus, effectively forcing it to leave its host. This technique can then be used for other chronic diseases that are caused by viruses. Another example is diabetes, which causes the cells in your immune system to attack the insulin in your body. If the genetic code in these cells could be fixed or changed, the cause of the diabetes would be solved. Although these scenarios might seem improbable or even impossible right now, genetic engineering is closer than you may think. Scientist’s behind the development of CRISPR are already preparing programs to cure different life threatening illnesses like cystic fibrosis, sickle cell anemia, and hemophilia. Genetic engineering may soon be an option at some point in our lifetimes.

In conclusion, the advantages of genetic engineering outweigh the negatives by a landslide. The elimination of genetic diseases in unborn children will save thousands of dollars, limitations, and pain in addition to providing the child more opportunity to express their individuality without the concerns of their health. Even non-life threatening diseases in children can provide major disadvantages to the overall development and success in life. Additionally, genetic engineering can be used to eliminate diseases entirely from the world therefore elongating the human lifespan. It would only increase the speed of what could eventually occur from evolution which is a naturally occurring event. Finally, it could cure chronic diseases in adults including HIV and diabetes. Genetic engineering is becoming more and more debated especially with the recent discoveries in technologies like CRISPR. Later in life you might have the option of choosing to genetically modify your own child. Perhaps it could save their lives. You could give them a life where they get to swim, rollerblade, and play baseball as much and as long as they want. You could give them what we cannot give Hunter Moff. You could give them a long and healthy life. Thank you!

Critique on Genetic Engineering in Humans. (2021, Sep 08). Retrieved from https://studymoose.com/critique-on-genetic-engineering-in-humans-essay 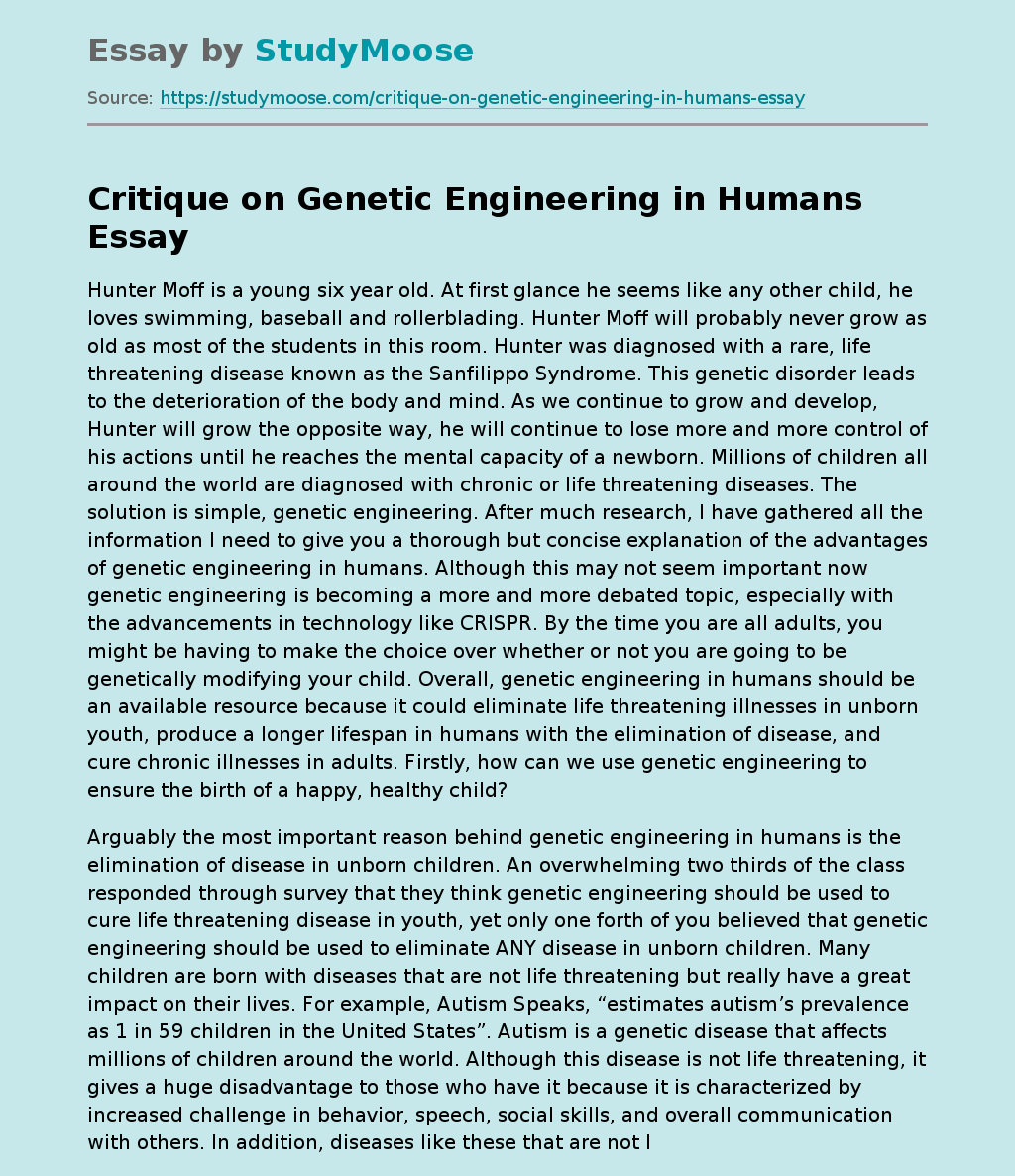