Critique of a Toy for Child Development

The toy I have chosen is the LEGO 750 BRICKS BOX TOY. This toy is good for children of ages 2 to 6 years, it allows for free play and helps children to be creative, it helps develop their learning skills and is good for their hand to eye co-ordination which also which also increase their physical and intellectual development ( Ellis flood 2010 Child Development for students in Ireland Dublin Gill & Macmillan ) Margaret Macmillan approach to the curriculum was designed around toy which develops a child’s fine and gross motor skills and manual dexterity and she regarded free play as an important aspect of a child’s development (Josephine Donohue & Frances Gaynor 2011 Education & Care in the Early Years 4th edition Dublin Gill & Macmillan).

Don't use plagiarized sources. Get your custom essay on
“ Critique of a Toy for Child Development ”
Get custom paper
NEW! smart matching with writer

Its also a learning toy that teaches the children numbers by counting the bricks and creates the things they see around them, they come in different sizes, shapes and colours which gets the children thinking on what to build with it, which could be a house, car, farms etc.

The toy is safe for the children as there are no small parts that can be swallowed or put in the nose or ears as they are block sizes which are relatively handy. They can be washed in soapy water since they are plastics and can also be sanitised with disinfectant.

My Lego Bricks allows the children to explore the environment by constructing their own house, cars, farms, trucks etc.

The Lego bricks is durable because its made out of plastic rubbers. The plastics are very strong so they can withstand a lot of impact, rough handling, throwing, kicking and still not break. The Lego bricks are very durable as its thick coating of plastic rubbers makes it strong and its washable which is important for hygiene reason especially in a pre school where we have lots of children from different homes.

The Lego bricks comes in a box, which makes it easy for storage which can be placed on the shelve or under the table or bed.

VALUE OF TOY IN RELATION TO THE CHILD’S OVERALL DEVELOPMENT

The physical development of the children’s is enhanced as their gross motor skills and fine motor skills improves. It also helps their eye to hand co-ordination as they require a higher concentration level in the construction or bringing of their imagination to life of what they see themselves creating.

Playing with the Lego bricks, a child can be introduced to maths through abacus numbers, letters on blocks/bricks also height, weight, matching, sorting and their vocabulary skills can be developed. Creativity play can also be developed as Lego bricks allow a child to be imaginative with their various construction and pretend play too can be played with the animals and Lego man. Their problem solving skills is developed too as they would want to make sure the outcome of their constructed blocks is perfect and their concentration skills is improved because they are engrossed by their play as they put in a lot of hours to achieve their goals.

This is a form of communication which is either written, spoken, signed language or body language. The child is able to communicate with an adult or to pretend play with the Lego man, as the adult talks to the children in a group playing with the Lego helps improve their understanding of languages. Playing with the Lego bricks help the child develop their language skills by naming the structured he/she have constructed and interaction between the children is encouraged as they were able to share with one another and communicate as they build their house, car, living rooms, kitchens, farms, gardens, place, letters, animals will teach children vocabulary and help them make a constructive sentences. They help the child count numbers, letters and the images on the Lego is clearly stated for the child to pronounced with the help of an adult if he/she needs it.

Playing with the Lego bricks help the children develop their emotional development as the children will be anxious to build their house, car, trucks, farms and also help the child’s growth, ability to feel and express an increasing range of emotions. Play with the Lego bricks can be rewarding and promote a sense of achievement for the child as the out come of what they have built will boost their ego and self esteem and can also help to release aggression as all their energy is put into it.

A group of children can play with lego bricks which helps them interact with
one another and the children also get to interact with an adult which will help their social development.

RECOMMENDATIONS FOR CHANGES/IMPROVEMENT TO THE ITEMS

I would recommend that the cost be reduced and quality improved so as to make it affordable and more durable by getting the value for your money. I would also recommend that the bricks/blocks be moulded in numbers/alphabets and the colours more brighter.

Critique of a Toy for Child Development. (2016, Mar 13). Retrieved from http://studymoose.com/critique-of-a-toy-for-child-development-essay 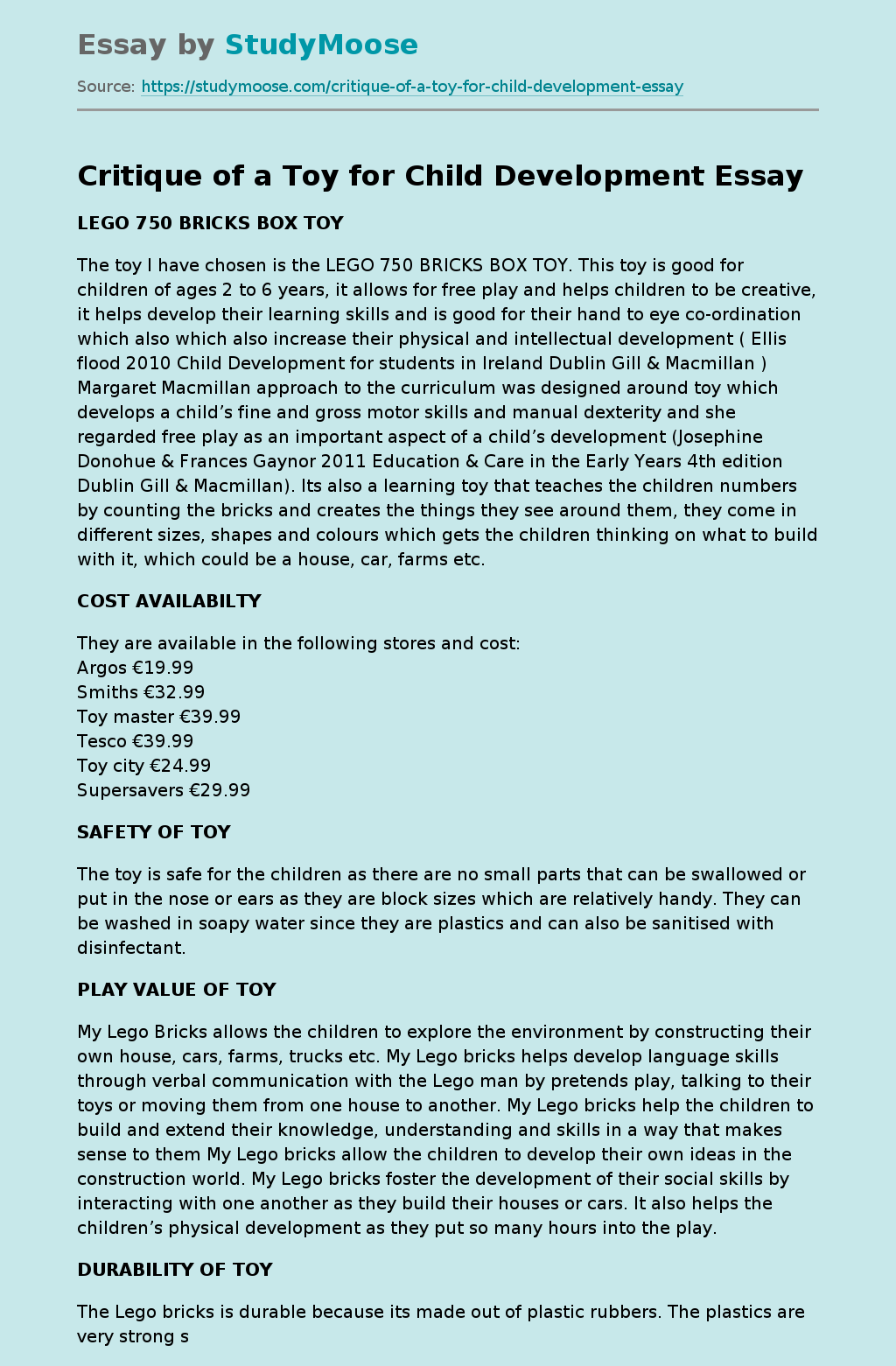