The character of Othello goes through many highly dramatic and clearly visible changes throughout the play. He was described as ‘Valliant Othello’ in the beginning of Act 2, but this is not a term that would be used to refer to Othello by Act 4. It is apparent to both the audience and Iago himself that his tricks to manipulate Othello’s behaviour and attitude have been affective.

Othello has been reduced to jealous, vengeful and passion- driven ‘monster’, who not only believes that Desdemona has been unfaithful, but now wishes for her to pay for these crimes with her life.

Don't use plagiarized sources. Get your custom essay on
“ Some critics have argued that Othello is weak and gullible for falling for Iago’s tricks ”
Get custom paper
NEW! smart matching with writer

Othello comments on occasions in the play how he is ‘too much of joy’, with Desdemona’s love, and stability the only thing keeping him sane. These are omens for future devastating actions in which Iago tips these fiery emotions that Othello possesses, so easily from love on to hate.

With such a drastic change the strength of Othello’s character is easily questionable.

He appears to lack patience or originality to stand against Iago’s comments and accusations, and through personal investigation draws his own conclusions. He himself never witness any of the events depicted by Iago, neither does anybody else, as they are completely fictional; Othello is willing to except Iago’s words, because of his past actions, which have led Othello to believe he is honest.

Othello is easily confused by Iago’s duplicitous language, and needing to maintain his authority and visage he has create, he chooses to except Iago’s words, rather than questioning them.

Othello has been throughout the play very noble and upright, he wants to be accepted in Venetian society, and so intelligence and knowledge is vital in gaining his much needed respect. In Act 3 scene 3 Iago makes the remark that ‘men should be what they seem, or those that be not, would they might seem none.

This is very ambiguous, and by Othello’s reaction it is clear that he does not truly understand what Iago is implying, but the emphasis of honesty, and the possibility that somebody is being dishonest is reinforced in Othello’s mind without his awareness. Not only this, but it also strengthens the idea in Othello’s mind that if Iago is criticising men for being dishonest, then he himself must be truly honest to make such a remark. Othello is never divulged to the ‘big picture’ as he always appears to arrive too late to witness any of the events first hand.

Therefore he is solely reliant on Iago’s opinions and accounts of the situation that he, as he is conveniently always present when they occur. Othello’s lack of judgement cannot be blamed for the conclusions that he arrives to, as he is constantly being fed corrupted and misleading information from Iago to alter his views. It is not only Othello who is deceived by Iago trickery, for every other central character, with the possible exception of Emilia, believes that Iago is acting in their best interests, instead of solely his own.

Iago was able to conceal his true nature to Othello, Desdemona, Roderigo, Cassio and the Venetian officers who represented Iago when he wished to be Othello’s lieutenant. He manages this by making sure that when he confesses his love and loyalty to the character he is completely alone with them, therefore he feels free to share his elaborate and truly bogus stories about other characters without the fear of them discovering his motives.

Iago not only alters his views with each of the characters, but also his language and approaches changes to suit that he is talking to. For when he is talking to Desdemona he becomes a lot softer and reassuring to her: “Do not weep, do not weep: alas the day” this is to calm Desdemona down, and make her less likely to question Othello’s actions, which could lead to Iago’s plans being discovered. When talking to Othello he uses much harsh and brash words, to anger Othello: “how satisfied, my lord?

Would you, the supervisor, grossly gape on? Behold her topped? ” This imagery and language is the same tactics used when Iago poisoned Brabantio’s mind of Desdemona and Othello’s wedding. Therefore if Othello is to be criticised for having such a weak a gullible mind, as to fall for Iago trickery, then many of the other characters have also to be labelled with the same affliction. Othello’s failure to discover Iago’s trickery is not necessarily a weakness in his character, as many of the characters did.

But this supposed weakness is clearly apparent because he himself even admits that he needs Desdemona to keep him sane: “perdition catches my soul” and so this, which was taken advantage of by Iago’s clever and manipulative nature was exaggerated and magnified to create a fundamental floor in the character, which led to Othello’s, Desdemona’s and Emilia’s downfall. Othello’s weakness in judging character is therefore not under normal circumstances noticeable, but with the correct manipulation can become deadly.

Some critics have argued that Othello is weak and gullible for falling for Iago's tricks. (2020, Jun 01). Retrieved from https://studymoose.com/critics-argued-othello-weak-gullible-falling-iagos-tricks-new-essay 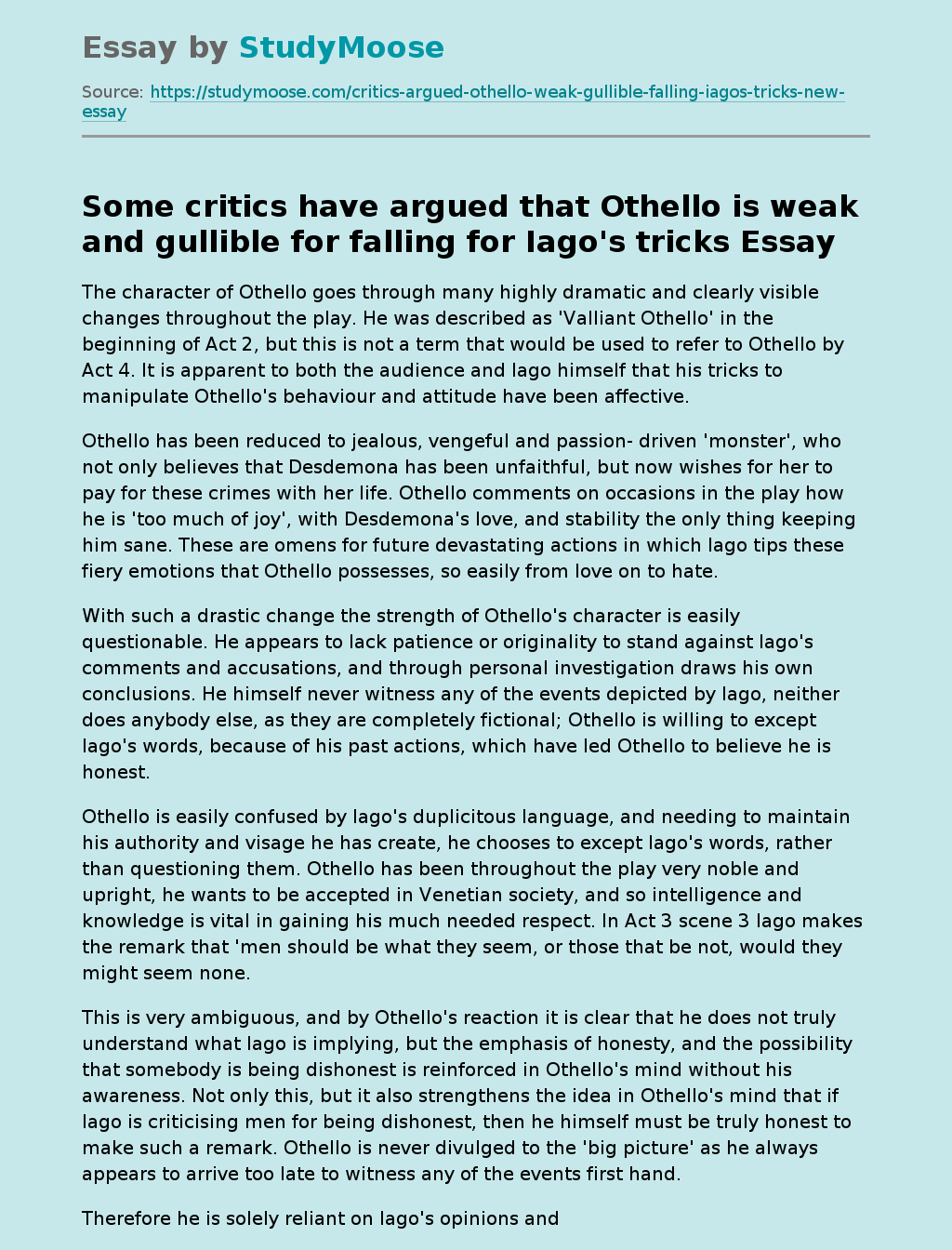