1. Question :
Reporter: A new campaign finance reform bill being considered by Congress would limit the amount of campaign contributions that political candidates can receive. However, a survey of candidates running for mayor, governor, and senate seats shows that not one of them favors the bill. Clearly, there is no desire among politicians to limit campaign contributions.

Turn in your highest-quality paper
Get a qualified writer to help you with
“ Critical Thinking Test Week 4 ”
Get high-quality paper
NEW! AI matching with writers

Which one of the following points out the flaw in the reporter’s argument above? Student Answer: The reporter doesn’t indicate the amount that the new bill would limit campaign contributions. The evidence provided by the reporter suggests that most politicians are in favor of the new bill. The reporter wrongly assumes that no politician has ever supported a bill intended to limit campaign contributions CORRECT The views of candidates currently running for office do not necessarily represent the views of all politicians. 2. Question :

Mrs. Orlof teaches two history classes, one in the morning and one in the afternoon. Yesterday she gave the same test to both classes.

3. Question :
All sages provide both wisdom and inspiration. Since Dasha’s speech contained wisdom and greatly inspired her audience, Dasha is a sage. Which one of the following points out the flaw in the argument above?

5. Question :
Catherine goes to her local movie theater only to see romantic comedies. Since Catherine did not go to the movies yesterday, there is not a romantic comedy playing at her local theater. The reasoning above is flawed because the evidence

Student Answer: assumes that corporate employees are more sleep deprived than other people is based on evidence that is statistically impossible fails to describe the effects the sleep deprivation has CORRECT relies on a sample that is too small to represent the entire corporate workforce

8. Question :
Career counselor: It is best for artists to build a practical and safe career that will guarantee them a secure income, and then pursue their art in their spare time. That way, they will be motivated to work hard at their day jobs to support their art making, and both their career and their art will thrive. Which one of the following, if true, would most weaken the argument? Student Answer: Some forms of art making are expensive and require a good deal of money to pursue. INCORRECT Many people who aren’t artists prefer to pursue practical and safe careers. Having the time and money to make art doesn’t guarantee an artist commercial success. CORRECT Splitting time between two pursuits in life often
causes both to suffer. 9. Question :

Memmie: The greater the population near a restaurant, the more potential customers it has and the greater chance its popularity will spread through word-of-mouth. O’Sullivans Restaurant just opened in the very densely populated town of Redville, so its chances for success are great. Sam: But the more people living in an area, the more restaurants there are in that area, so the more competition each one faces. There are twelve other restaurants serving the people of Redville. Memmie and Sam seem to disagree about whether

Student Answer: O’Sullivans will fail in its first few months O’Sullivans will serve a different kind of food than the other restaurants in Redville CORRECT the high population of Redville ensures O’Sullivan’s a great chance for success word-of-mouth about a restaurant can spread in a densely populated town like Redville 17. Question :

Student Answer: The monkey, poodle, and horse are the only animals performing in today’s circus exhibition. No circus animals were prescribe medications this week. INCORRECT No more than two circus animals have a clean bill of health. CORRECT Neither the monkey nor the horse performing in today’s circus exhibition were prescribed medications this week. 18. Question :

The higher the price of an antique, the greater people’s expectation that the object is rare. That, in turn, makes the antique appear more valuable. If the statements above are correct, then offering an antique for sale at a bargain price Student Answer: will likely increase people’s expectations that the antique is valuable will guarantee that the antique will not sell at a profit should be encouraged because it increases the likelihood that antique will be sold CORRECT should be discouraged because it lessens a quality that makes that antique desirable 19. Question :

Some drugs combat obesity or alcohol addiction by turning off pleasure centers in the brain. However, if the dosage is too high, there’s a risk that people taking them will be plunged into depression. The statements above, if true, support which one of the following assertions? Student Answer: It is useless to try to treat obesity or alcohol addiction through drugs. All drugs, if taken at too high a dosage, pose the risk that the people taking them will be plunged into depression. CORRECT The benefits of a medication may be at least somewhat offset by its side effects. INCORRECT Drugs that affect pleasure centers in the brain are often taken at dosages considered to be too high. 20. Question :

Detective: The robbery at the mall was carried out by a mall employee acting alone roughly one hour after the mall closed last Saturday night. The only employees present at the mall at the time of the robbery were security guards Evans and Clark. Since the mall’s surveillance system was disabled by the thief just before the robbery, the thief must be Evans. The argument above would be valid if

The very large increase in allergies over the last thirty years is due to the great success of immunizations administered over this time period. Since immunizations have nearly eliminated life-threatening diseases such as polio, the human immune system increasingly targets other environmental substances in order to keep working properly. Allergy symptoms such as runny nose and itchy eyes result when the immune system attacks pollen that is breathed in from the air. Which one of the following best expresses the main point of the passage above? Student Answer: Immunizations often have surprising side effects. Immunizations have been very successful in eliminating life-threatening diseases. INCORRECT Viruses that once caused polio now cause allergies. CORRECT The use of immunizations has led to an increase in allergies. 24. Question :

Political science professor: Many people insist that the Internet is revolutionizing the political process. They argue that Internet debates and online political polls and chat rooms give people greater access to political information. And they’re right that online political chatter increases daily. But offering or reading anonymous online opinions does not by itself make for active political participation. In the past one would attend a rally, protest, or town meeting to engage in real politics. Today, people sit passively in front of computer screens under the illusion that they are connecting with their fellow citizens. Which one of the following best expresses the main idea of the professor’s argument?

25. Question :
Whereas many industries suffer during economic recessions, the art industry does well. Some think the reason is that artists feed off the anxiety and uncertainty during recessions to produce inspired works. Others think that recessions, while harmful to most people, produce a handful of very rich people willing to pay very high prices for artworks, driving up the value of the art market as a whole. The author of the passage above is primarily interested in 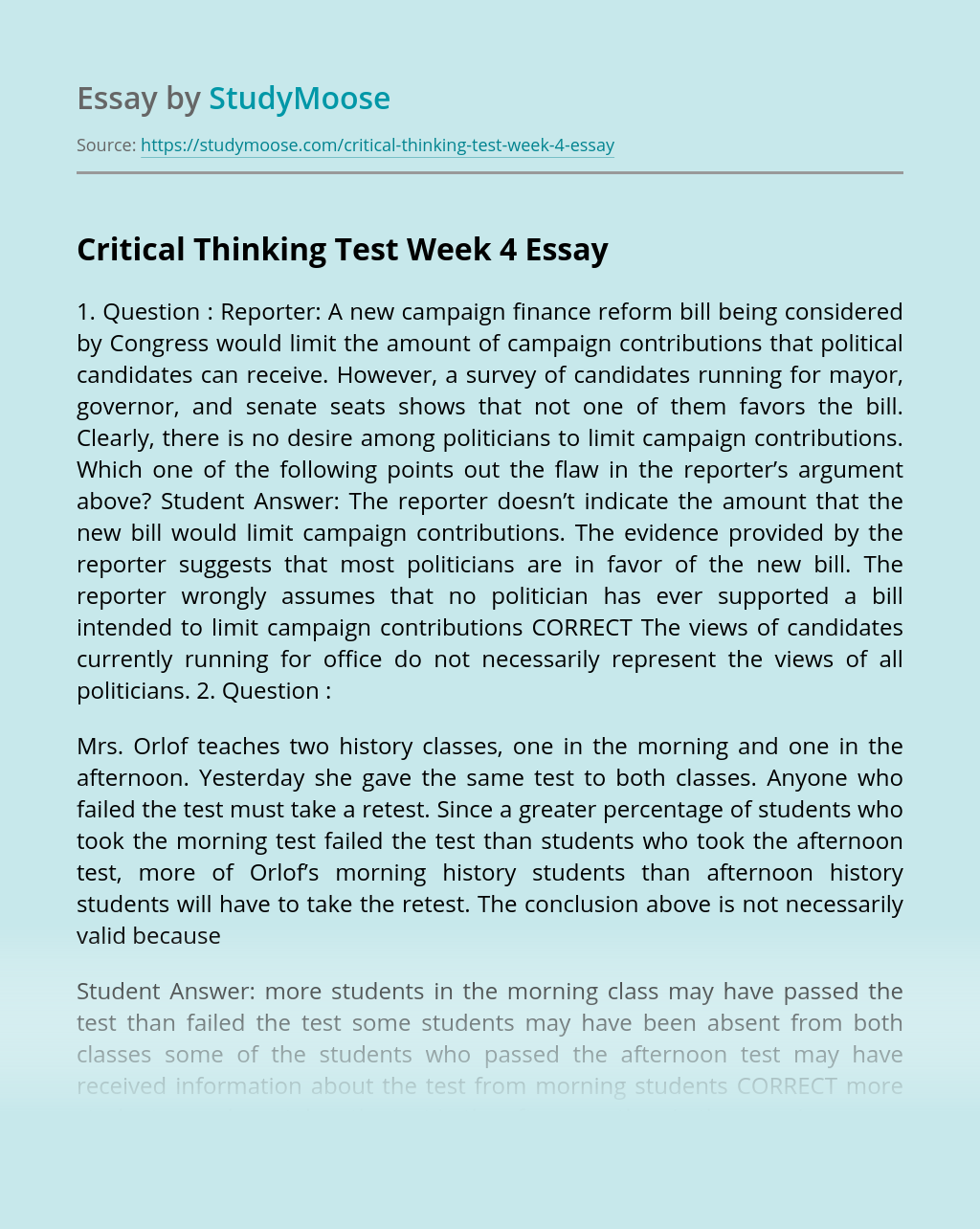 Turn in your highest-quality paper
Get a qualified writer to help you with
“ Critical Thinking Test Week 4 ”
Get high-quality paper
Helping students since 2015
Stay Safe, Stay Original