Critical Thinking Related to American Idol: A Big Hit for Marketing Research? What Are the Benefits of Taking a Professional Approach to Answer Marketing Research Questions? 1 1. Marcello and Litzenberger felt it was important to conduct this study because _________? (State the relevant background information used to justify their work. ) Answer: Marcello and Litzenberger were attempting to overcome a challenge in client development. Specifically, they were attempting to obtain evidence to confront skeptics of using professionally-done marketing research without comprising the privacy of previous clients with whom they had worked.

Don't use plagiarized sources. Get your custom essay on
“ Critical Thinking Related to American Idol ”
Get custom paper
NEW! smart matching with writer

It was inappropriate for them to share the results of previous studies with anyone else than the clients who had contracted them for those studies. 2. The main purpose of Marcello and Litzenberger’s study was ____________? (State as accurately as possible the purpose for doing the study. ) Answer: Marcello and Litzenberger were now focused upon one project for demonstrating the usefulness of marketing research to prospective clients. The research question they now pursued was the following: What still needs to be known about the viewers and voters for contestants of the popular TV show American Idol? .

The key questions Marcello and Litzenberger are addressing are __________? (Identify the key questions in the mind of the case protagonists. ) Answer: First, Marcello and Litzenberger are attempting to answer the big question about the benefits of conducting marketing research in a professional way. They face skeptics who try to dismiss marketing research as being impractical. For example, skeptics of taking a professional approach sounded warnings about “how enough was already known about ustomers to make decisions”.

Other times, skeptics would assail the sampling methods of studies in attempting to dismiss the results. While at other times, skeptics would merely claim that answering such questions about customers would be too expensive to obtain. In sum, professionally done marketing research was presented as being impractical by these skeptics. Second, Marcello and Litzenberger are focused on a specific research question in their attempt to justify the use of professionally-done marketing research.

The question was “What still needs to be known about the viewers and voters for contestants of the popular TV show American Idol? ” 4. The methods used to answer their key questions were __________? (Describe the general approach used and include details that assist in evaluating the quality of the results – sample size, etc. ) Answer: In answering their big question, Marcello and Litzenberger should be given high marks for respecting the members of their intended audiences: prospective clients and media journalists.

They could have simply said “Trust us. Marketing research that is professionally done is worth it. ” Instead, they fielded a study to provide evidence that would address the issue of professionally-done marketing research in a meaningful way. In answering the specific research question of the American Idol study, Marcello described their approach this way: “We could place about six questions on Opinion Research Corporation’s CARAVAN national omnibus survey to find out more about whom, among adults 18 or older living in the U. S. watched and voted in the 2006 season of American Idol. Such an omnibus survey could be done by telephone from during three days in April 2006. It will run about $1,000 per question. We’ll have the Opinion Research Corporation ask our questions along with those of other sponsoring companies to a randomly selected national sample of 1,045 adults comprised about evenly of men and women. With a total sample size of more than 1,000, we will be able to say with 95 percent certainty that the results would be accurate to within +/-3. 0 percent.

They quickly realize that aside from those directly involved in the production of the show, the sponsors, and news journalists would have a keen interest in understanding if the show’s concept is durable. This would be assessed by measuring the involvement of adults in voting, their confidence in the judges’ opinions, and comparing the perceived influence of voting for American Idol contestants with voting in presidential elections. 6. The results can be put into context by comparing them to _________? Place the quantitative results into an easily understood context by expressing as %s or by comparing to an intuitively understood value – e. g. , 2x the size of a football field) Answer: With a total sample size of more than 1,000, Marcello and Litzenberger will be able to say with 95 percent certainty that the results would be accurate to within +/-3. 0 percent. They note that this exceeds acceptable standards for a survey about media preferences.

They put these results in context with a concrete example as follows: “So if only 10 per cent of our sample reported voting for American Idol contestants, we would be able to say with 95 per cent confidence that the actual percentage of the adult population who voted was somewhere between 7 and 13 per cent? “Litzenberger asked. “You’ve got it”, Marcello affirmed. “Of course, it could be a lower or a much higher percentage. Nobody really knows now. Anybody who says otherwise is merely speculating. ” 7. The main inferences/conclusions in this article are __________? Identify the key conclusions the case protagonists present in the article. ) Answer: Marcello and Litzenberger have used their knowledge of marketing research, and some cleverness to surmount a major challenge in confronting skeptics of marketing research. They have chosen to demonstrate before a public audience the validity of professionally-done marketing research. Their approach and their logic appear sound. The anticipated out-of-pocket expense of $6,000 to use the omnibus survey appears to be a very modest investment to prove their point.

By spending their own money, they further demonstrate the confidence they have in using marketing research. 8. If we take this line of reasoning seriously, the implications are ___________? (What consequences are likely to follow if people take Marcello and Litzenberger’s reasoning seriously? ) Answer: Because Marcello and Litzenberger are willing to actually conduct a study and provide evidence about the behavior and perspectives of American Idol voters, the public will be able to assess their reasoning once the study is completed and the results are made public. . What steps of the six-step marketing research process are evident in this case? Answer: The problem definition, developing an approach, and research design steps are most eveident in this case. No data is collected, yet. Therefore, no analysis is done, and no presentation is made. However, the last three steps of the marketing research process are considered by Marcello and Litzenberger in order to understand the results to which the first three steps may lead. 10. What is the role of marketing research in marketing decision making suggested by this case?

They executed it just as Marcello had proposed in the case. After obtaining the results they targeted 350 reporters, producers, editors, bloggers and other influencers. Each of these reporters was hand-picked based on their beat. They developed a strong press release and several media angles to make their target reporters’ lives as easy as possible. Shortly after the release of their study’s results, the media interest reached a frenzied level. It was estimated that their study was presented to an audience of more than one billion readers and viewers. This number amazed Marcello and Litzenberger.

It turned out that one in 10 adults in the general U. S. population voted during the 2006 American Idol season. In addition, Marcello and Litzenberger pitted the judges against each other by asking respondents which judge’s opinion they trust the most. The gossip columnists of Us and other outlets hyped the fact that Simon Cowell’s opinion was valued more than twice that of Randy Jackson and nine times more than that of Paula Abdul. Marcello and Litzenberger incorporated the political Beltway angle by asking people if they thought their votes for American Idol count as much or more than their votes in the U.

S. presidential election. It turned out 35 percent do believe a vote for American Idol holds more weight. The story took on a life of its own. Good Morning America, CNN, MTV News and MSNBC, in addition to a number of the top daily newspapers around the country, covered it. The real kicker was when Simon Cowell – live on American Idol – boasted that his opinion was worth more than the other judges’ opinions. His bragging was prompted and clearly scripted by the host, Ryan Seacrest. In the case of the American

Idol study, a range of topics provided news outlets with different angles. The Associated Press story, which made up the bulk of the coverage for at least 10 of the stories published, focused on two key statistical findings. One statistic, reporting that one in 10 people voted in American Idol during the 2006 season, was believed to be staggering by many. It demonstrated that rather than sitting home as passive viewers, many adults were highly engaged in the show and voting. It contradicted what many had speculated: only tweens and teens vote in the show.

Another statistic, which was reported by several general media outlets and gossip columns, reported that 58 percent of American Idol viewers value Simon Cowell’s opinion more than the other judges’ opinions. In addition, a question that asked the public to compare their American Idol vote with their vote in the presidential election offered a political angle for the talking heads. 1. Adapted from Melissa Marcello and Julie Litzenberger, “Fascinating Findings” Quirk’s Marketing Research Review, Vol. XXI, no. 3 (March 2007): 58-62. 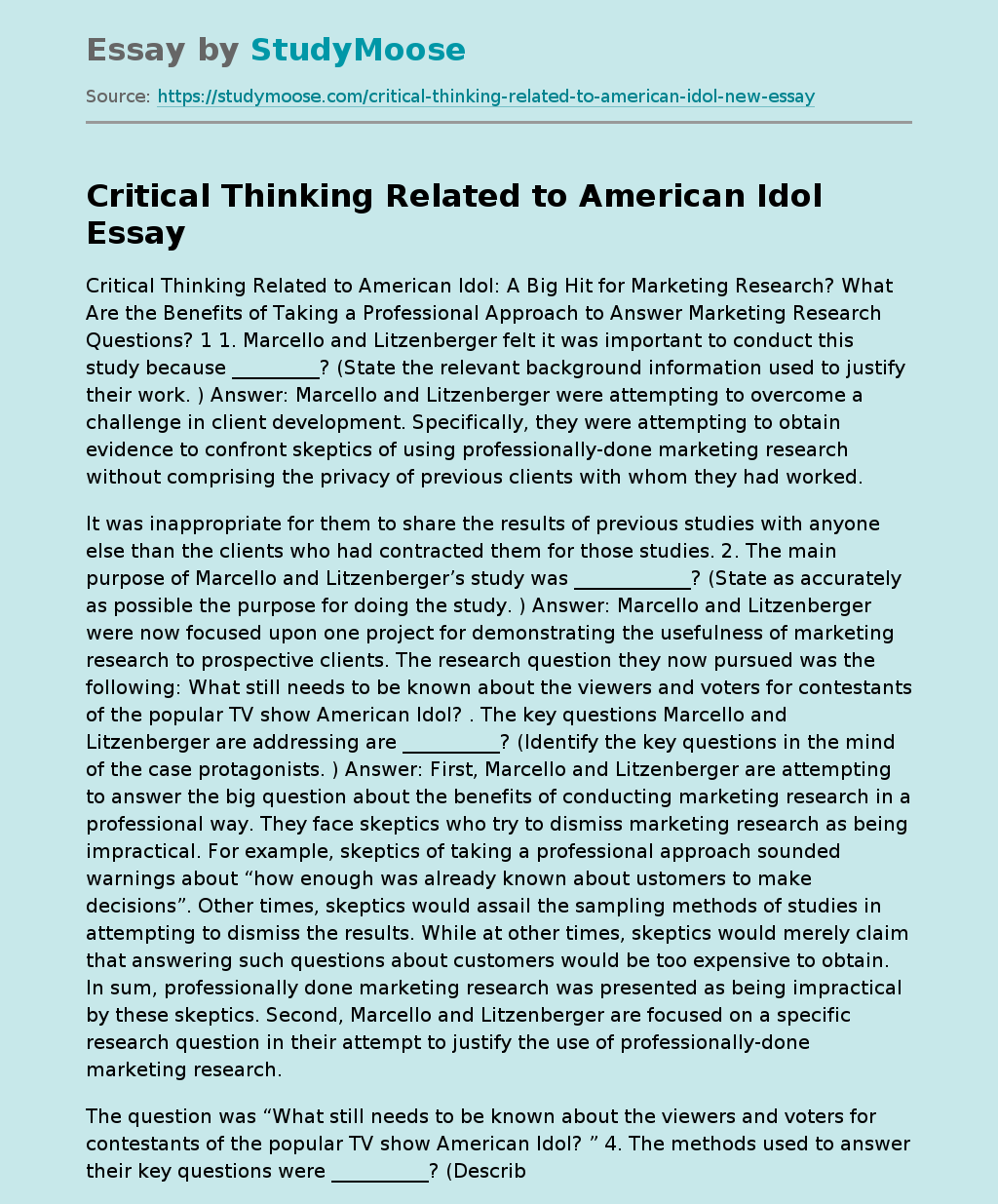