The Godfather, a story about a multigenerational crime family by the Italian American author Mario Puzo, was one of the best-selling books since it was published in 1969. Not only the book was a phenomenon, its movie under the direction of director Francis Ford Coppola had also become a landmark in American movie since it was released in 1972. The Godfather detailed impressively the activities of the gangster world, especially the Corleone family which was under the control of the patriarch Vito Corleone starring by Marlon Brando and Al Pacino as his youngest son Michael Corleone who soon inherited his father’s position.

Turn in your highest-quality paper
Get a qualified writer to help you with
“ Critical Thinking Essay: the Godfather ”
Get high-quality paper
NEW! AI matching with writer

The film lived up to the term masterpiece which helped it win three Academy Awards for best actor, best picture, and best adapted screenplay. Although the movie was full of brutal violence and mass killing of people, it also showed the care, the love, and the loyalty of the Corleone family members for each other.

Rather than just showing the criminal side of breaking the laws or murdering people, The Godfather showed a brand new vision of the gangster world to the audiences.

The criminal genre first started with the film the Little Caesar which was the first movie ever made about the gangster world in 1931. Later, many famous directors had taken advantage of this new trend and released many great movies with this genre, such as director Howard Hawkes with his famous film Scarface in 1932 and director Raoul Walsh with the movie White Heat in 1949. Those were all the big films that gave the audiences the impression of how audacious and dangerous the Mafia was.

Mostly those movies focused on a younger gangster who was trying to work his way up in his criminal career to become well-known and powerful in the underworld by all means. Then, the release of the Godfather impressively surprised all the fans of the mob movies with a totally different viewing experience.

The film depicted a systematic criminal organization, a “family business” that was transferred from generation to generation. The audiences are attracted in the very first plot of the movie when it shows Vito Corleone is doing his “business”. The man is insisting him to take revenge for his daughter who was brutally beaten by her boyfriend and he will pay any price the Godfather wants. The audiences will think that surely the Don will say “yes” because that is how a mobster is in their mind: Give them money, they will do anything.

However, Vito says “No” because the only thing he wants from the man is friendship and he feels disrespectful when the man is only talking about money. Another plot that shows the breakthrough of the Godfather is when his oldest son, Santino, was butchered by Emilio Barzini’s men, the second most powerful Don, Vito still takes the initiative of renouncing all the vengeance at which audiences think there will be a massacre between the two families. Vito also makes a concession in doing drug business though he mentioned that he never believed drugs. In return, he wants a guarantee from other families for the safety of his own family and the younger son, Michael, who is still in Sicily hiding away from the police.

Furthermore, thanks to director Coppola for being determined in choosing the appropriate actors and actresses for every characters in the movie which was a great contribution to the movie that made it become a masterpiece. Marlon Brando was not the first choice for the character Vito Corleone, he was actually refused for casting by the Paramount executives. However, Coppola believed Marlon was the best match for the character so he fought hard for him until the executives agreed. Marlon proved to the executives that Coppola was right by showing his consensus in being a patriarch of a powerful criminal family. The way the Godfather talks to his clients makes him a respectable man to his friends and family but a dangerous and cold-hearted killer to those who wants to go against him.

Besides, the great performance of Marlon Brando puts an outstanding development of Al Pacino’s character. Like Marlon, Al Pacino was not highly valued by the executives because of his looks and lack of experiences in acting. However, with his efforts, the viewers can see the improvement in performing Michael Corleone through all the scenes. The scene he played that helped him keep his role is when Michael was in the restaurant with McCluskey and Sollozo. This plot was really breathtaking and terrifying that makes viewers attentively watch it to the end. Michael’s shiver and worry before the shot successfully portrays an inexperienced mobster, a newbie in the underworld of Michael. Indeed, in the second half of the movie, when Michael took over his father’s chair and started the wipe-out of all of the family’s rivals, he showed an image of a young Don who was more wise and dangerous than his father.

As a gangster movie, the Godfather has many plots that can make viewers jump out of their chairs or hide their faces behind their hands. As an experienced director, Coppola knew how to combine background music with the plots to emphasize their contents. For example, when Jack Woltz refused the offer from the Godfather of letting Johnny Fontane cast a role in his movie, the next morning he woke up and saw his beloved horse head in his bed. The evil music was playing very small when the scene was showing Woltz’s garden, viewers could even hear the sound of the crickets. Then the camera slowly moved to Woltz’s bedroom where the music was playing louder and louder as it reached near Woltz’s bed. Finally, the music turned to maximum when Woltz was screaming because he saw the horse head. This scene really freaked people out because Coppola used a real horse head.

Lastly, the movie is remarkable because it shows deeply the human part of mobsters. A typical example of how the Corleone members care for each other is Santino’s care about his sister, Conny. At the first scene of the movie, there was the wedding of Conny and Carlo. Unfortunately, Carlo did not love her. He purposely married to Conny because he wanted to get involved in Corleone family which was the most powerful Mafia family in New York. However, Vito Corleone did not let any outsiders to be part of the his business. Carlo was disappointed and he started abusing Conny fiercely, his just married wife.

In the film, audiences can see Santino was the only member in the family protected Conny. Santino was also a very hot-tempered person. In some plots, because he was so aggressive, he brought a very bad impression on viewers. Nevertheless, watching him beating Carlo on the street, viewers would have a more positive feeling toward him. Another plot that makes the audiences more sympathy with the movie is when Vito retired, he became an old man with very simple joys of doing gardening and playing with his grandson. Later in the movie, he died by a heart attack, a very normal way that could happen to other elders. That scene really surprises viewers because they may think as one of the most powerful Don in the Mafia world, Vito Corleone should have had a more honorable death.

Overall, although the Godfather was released in 1972 at which the performance of the actors and actresses were not as good as the casts now, it still has the full attention of audiences every time they watch. It is rated R which means it has many extremely violent scenes and nudity plots. Some people may think its violence is quite tame. However, if parents don’t take seriously consideration before letting their kids see the movie, their kids might still have a nightmare at night. 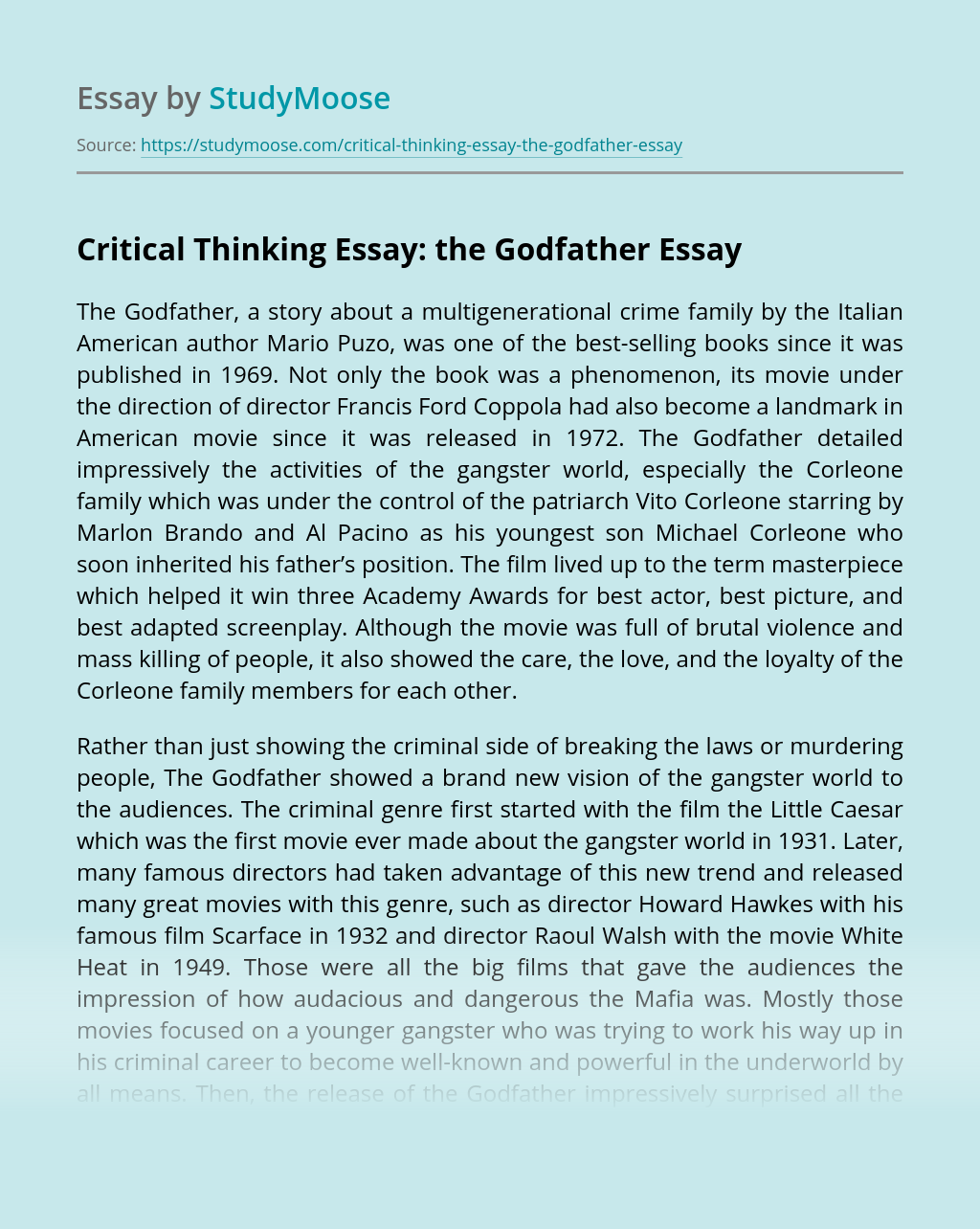 Turn in your highest-quality paper
Get a qualified writer to help you with
“ Critical Thinking Essay: the Godfather ”
Get high-quality paper
Helping students since 2015
Stay Safe, Stay Original