Critical Summary of the Sunrising by John Donne

The Sun Rising,” by John Donne, is a lyric poem about two lovers. The poem is divided into three stanzas, each ten lines long. The rhyme scheme in each stanza is ABBACDCDEE. This is a dramatic poem where the speaker and his lover are in bed together. The speaker personifies the sun, and is speaking to it throughout the poem. As the sunlight comes through the windows, the speaker tells the sun to leave them alone. He seems to feel that their life together is complete, and that the sun is being a nuisance.

Don't use plagiarized sources. Get your custom essay on
“ Critical Summary of the Sunrising by John Donne ”
Get custom paper
NEW! smart matching with writer

He then tells the sun that his lover is worth more than anything the sun can ever find outside their bedroom.

The poet addresses the sun as a person and rebukes the sun because it has wakened him and his lover from their sleep. He demands to know why lovers should obey time. He addresses d sun as “busy old fool”. He calls it unruly bcoz by peeping into d bedroom through windows nd curtains it disturbs d lover.

He also shows his dominance over the sun, calling it a ‘saucy pedantic wretch’ and tells the sun to bother other people instead such as late school boys or workers imploring or more time to sleep. He tells the sun to find the royal court people and farmers to let them start their day instead of controlling the lovers, because time does not exist in love and unlike season or climate or sun, love doesn’t change. Hours, days and months are just silly, useless measures.

In dis section of d poem we come across colloquial expression like “busy old fool” nd “saucy pedantic wretch” such terms of contempt fitfully set d tone of d poem which is one of annoyance.

The poet challenges the sun about its strength, that the sun isn’t is high and mighty. because he can make it disappear by winking, except he doesn’t wish to “lose her sight so long” He teases the sun that his lover’s eyes are so beautiful and bright that it can blind the sun. He tells he sun to go to far away countries like India or stay because the entire world is with him in the bed. The sun can also find kings but he and his lover are so superior that even the kings will say the most important people are in his room, ‘all here in one bed lay’.

The poet claims that his lover is ‘all states’ and in fact the whole world
itself and he is the ‘prince’ that rules it, nothing else exists other than them. They are the celebrity, and even other princes want to mimic them. He declares that honour and science are nothing compared to their love and that the sun is only “half as happy as we.”

He says the sun is old and so it should rest because its duty is to warm the world and since they are the world, the sun has completed its duty. Then, the poet cleverly turns the sun’s refusal to leave into a show of its generosity and by shining at them, it has centered itself upon the room of his love and so they are the sun, the center of the universe. The last part of d poem reveals d poets wit, his mastery over d use of apt imagery nd conceits. At d begning of d poem d poet asked the sun to go away from dere . now he invites the sun to go round their bed nd shine on dem

Critical Summary of the Sunrising by John Donne. (2016, Apr 06). Retrieved from https://studymoose.com/critical-summary-of-the-sunrising-by-john-donne-essay 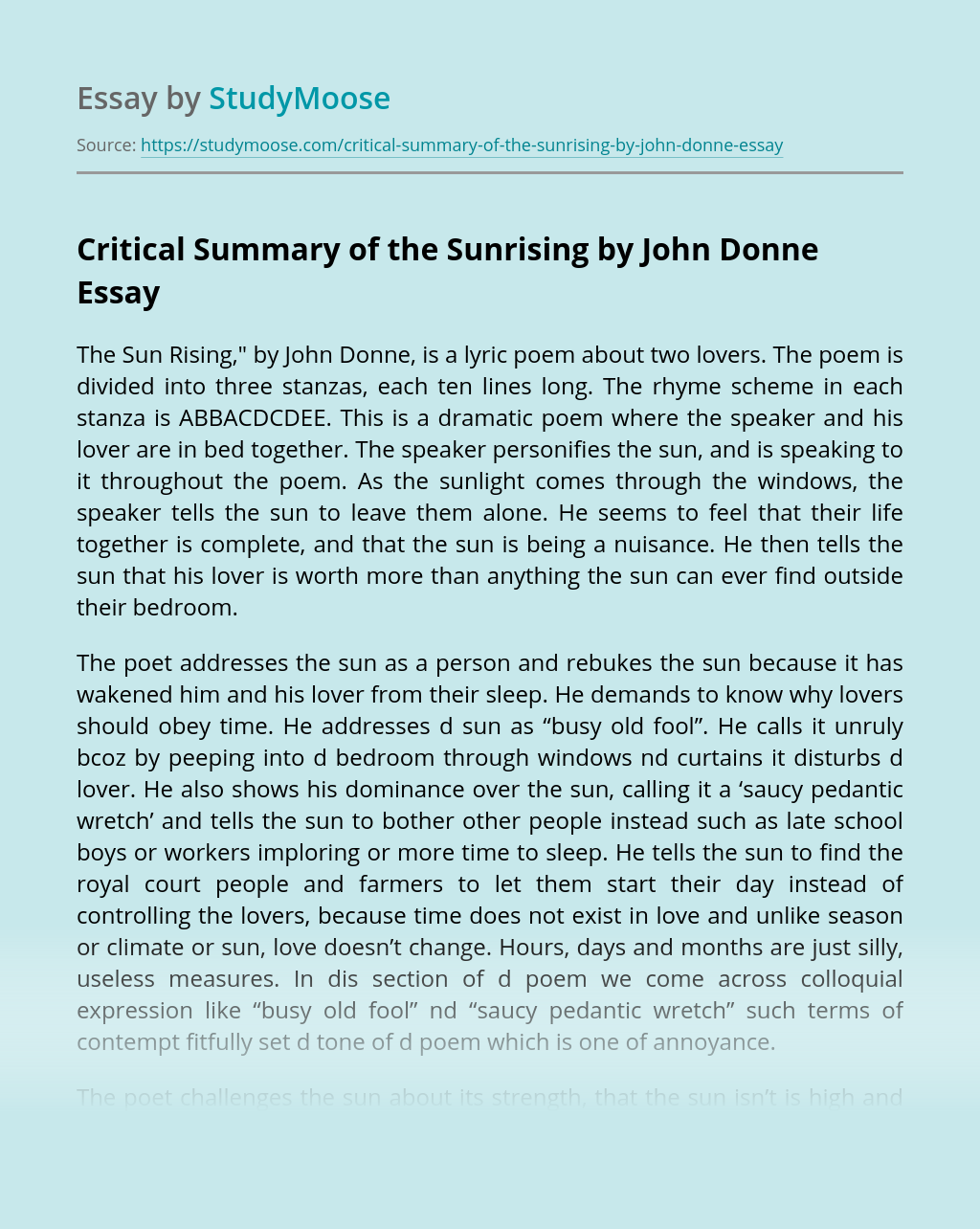