Critical Review of the Duchess of Malfi Play

The production of The Duchess of Malfi is a vibrant, swash-buckling Jacobean affair. It is appropriately seasoned to a modern audience by the use of ambitiously experimental sets and intermittently ‘fine’ utterances, subsequently giving more substance to what the characters say. As we uncovered the symbolic treasures of the play, it becomes richer, and the added use of stage directions, makes the production (according to TS Eliot), ‘possessed by death.’ Although I concur that without the addition of Bosola’s soliloquies, there would be something lacking.

Don't use plagiarized sources. Get your custom essay on
“ Critical Review of the Duchess of Malfi Play ”
Get custom paper
NEW! smart matching with writer

The play takes place against the back-ground of the court where we are given an insight into the corrupt nature of the production. This is foreshadowed by Antonio; there are ‘sycophants’ and ‘death and diseases’ which ‘spread’ through ‘the land.’ Additionally, he makes references to France; they have ‘a judicious king’ and ‘works of heaven.’ This is set against the greedy avarice of the Malfi court where lust, corruption ‘sin and retribution'(Federick Allen ) is rife throughout the play.

It is a revenge tragedy which was popular amongst a Jacobean audience. Notwithstanding their attitudes towards vendettas (which was deemed unlawful and tinged with deceit), the savage, sadistic even would have still been considered utterly tasteful. Although we are seasoned to violence, our attitude towards murders and the hypocrisies of the church is more disapproving and so this is likely to arouse as much consternation.

In spite of the modern scenic devices, the sardonic, sombre tone (most effectively poised through Bosola) of the language was kept.

The actor adroitly posits his bawdy character by his expert delivery of descriptions. This is most explicitly seen in his comment on the corrupt dealings of both the Duke and Ferdinand. They ‘are like plum trees that grow crooked, rich and over laden with fruit. ‘ Webster uses figurative language and this simile creates imagery of two excessively glutinous characters. Bosola’s language is coarse, unrelenting and suffused with sexual innuendos; ‘for places in the court are but like beds’ (which is ironically evocative of the characters’ liaisons). Thus, we were still able to enjoy the wry wit of this depressive character.

The theatrical brilliance of the play lies in the courageous use of scenic devices. There is a black-out before a tableau of ‘the artificial figures of Antonio and his children’ and the dismembered hand are brought in before the Duchess. The darkness appears to be a metaphorical expression for the ‘sad spectacle’ the protagonist is cursed with throughout the duration of her last scenes. The director alludes to an impending death and torture with a fiery glow. Thus, the primary point is made more simply and lightly than if the entire responsibility was on the spoken line. However, the poetic language of the play characterises Webster as moving increasingly away from the prosaic to the poetic. This, coupled with the visual effects makes the play, (according to AC Swinburne) a ‘violent delight of horror.’

Critical Review of the Duchess of Malfi Play. (2020, Jun 01). Retrieved from http://studymoose.com/critical-review-of-the-duchess-of-malfi-play-essay 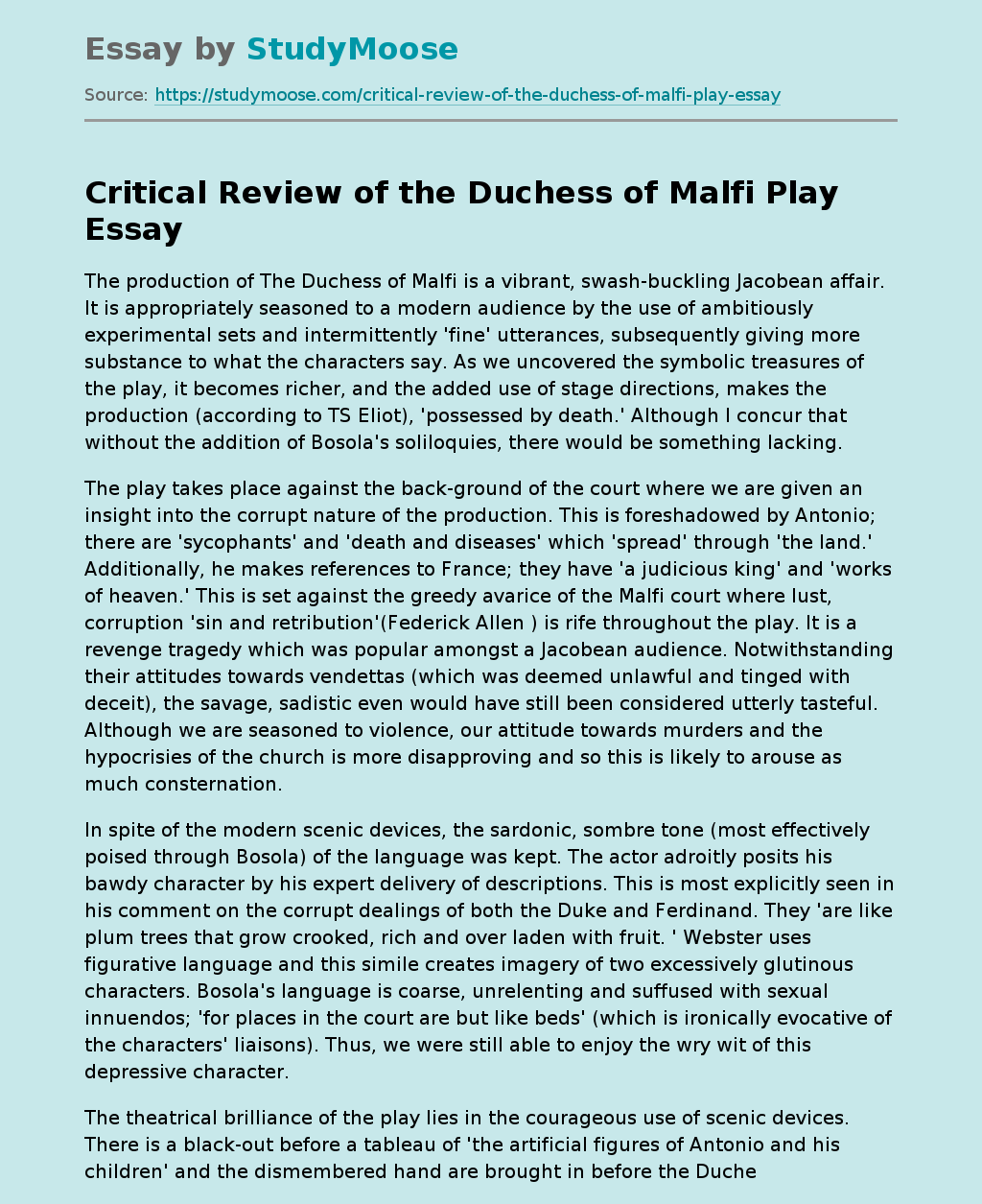