Critical Movie Review “Girl, Interrupted”
This movie revolves around a young woman named Susanna in the 1960s who is experiencing mental issues and ends up in a mental institution. Her journey focuses on her relationship with several of the other patients and nurses. At first she doesn’t believe she is ill, and resists her treatment, instead befriending another patient, Lisa, who takes her on many adventures inside and outside of the hospital. Lisa leads her down the wrong path which ends in the death of a former patient.

This event leads Susanna down the right path and she dives into focusing on making herself well.

The lead characters include Susanna, a young woman with borderline personality disorder. She doesn’t know what she wants to do or where to go in life. She finds herself admitted into a mental institution after taking a bottle of aspirin and drinking a bottle of vodka. Lisa is a “lifer” patient in the ward, and she clearly has some major personality, social and mental issues.

It was never clearly spoken what her diagnosis was, however, some of the other girls on the ward mention sociopath, and criminally insane. She has no empathy for others around her unless it benefits her. She is manipulative and conniving. She uses the weakness of the minds in her circle to get what she wants. This intrigues Susanna, who befriends Lisa, to Susanna, she personifies freedom. Another character is Valerie, a black woman, and head nurse of Susannas ward.

She doesn’t take any lip, and is a very strong mother figure in the story. Valerie is a single mother, and I believe this adds to her strength with dealing with the girls in the ward.

There are several mental disorders depicted in Girl, Interrupted. Susanna has borderline personality disorder. This was portrayed very well, considering the clinical description of the disorder. She feels that time can go backward and forward, she frequently has flashbacks, is generally pessimistic, tends toward the company of men, whereas she is quite promiscuous. Susanna also made a feeble attempt at suicide by taking aspirin and vodka, which is what landed her in the hospital. Our book states that one thing borderline disorder sufferers do is threats or attempts at injuring themselves for attention. I believe that the talk and attempts at death are more a call for help than a desire to injure oneself.

Lisa, well, she is textbook sociopathic. She is classically crazy, and portrayed well. Lisa has no empathy or feelings unless she can be benefited. She latches herself onto Susanna because she sees that Susanna can be manipulated. Lisa shows a lot of violence and false threats to acts of violence. I also believe that Lisa loves the attention, and craves it. She also gets off on pushing peoples buttons, to see how far she can push a person. This was perfectly shown when she and Susanna run away and stay with a former patient, Daisy. Lisa pushes Daisy’s buttons to a point that she hangs herself. This was a turning point in the movie where Susanna realizes that she needs and wants to get better, as well as being able to see Lisa for who she really is.

Susanna initially has issues coping with her diagnosis. She believes that her being in the mental hospital is a ploy and a way to hide her by her parents. She doesn’t really understand why she is the way she is, or why she thinks the way she thinks. Befriending Lisa, is her way of rebelling in a small way. She struggles with her diagnosis but after Daisy’s death, she becomes committed to getting better. She uses the resources of the hospital to get everything off her chest, which makes her feel more normal.

Wynona Rider and Angelina Jolie did a fantastic job portraying Susanna and Lisa. Ms Rider has always been a fantastic actress and her look is perfect in portraying the malaise of Susanna. You really begin to believe and feel what Susanna feels. One begins to understand the pain and suffering that Susanna is going through. She wants to fit in, maybe too much. Yet she does not want to be like her mother. She wants to be different. She is ambivalent. Ms Jolie, well, she gets the Oscar for being able to show how smart a crazy person can be. Sometimes we think of a person with a mental issue as drooling and head banging. Lisa is very smart. She sees the world like no other person can see it. Lisa believes this is an advantage, that she can see the real truth. Ms Jolie put you right in the middle of that image and almost made one afraid to open their door to a stranger.

I love this movie. It has been in my collection for years and I have watched in many times. This time through though, I was really focused on the girls’ behavior and the symptoms they displayed. I’ve always thought this movie applied to me a lot, helping me to suppress some of the feelings I have sometimes, and revealing that I need to stay on my meds as well. It also helps me know that “crazy” isn’t always “crazy” and that there is a way to get well, and stay well. 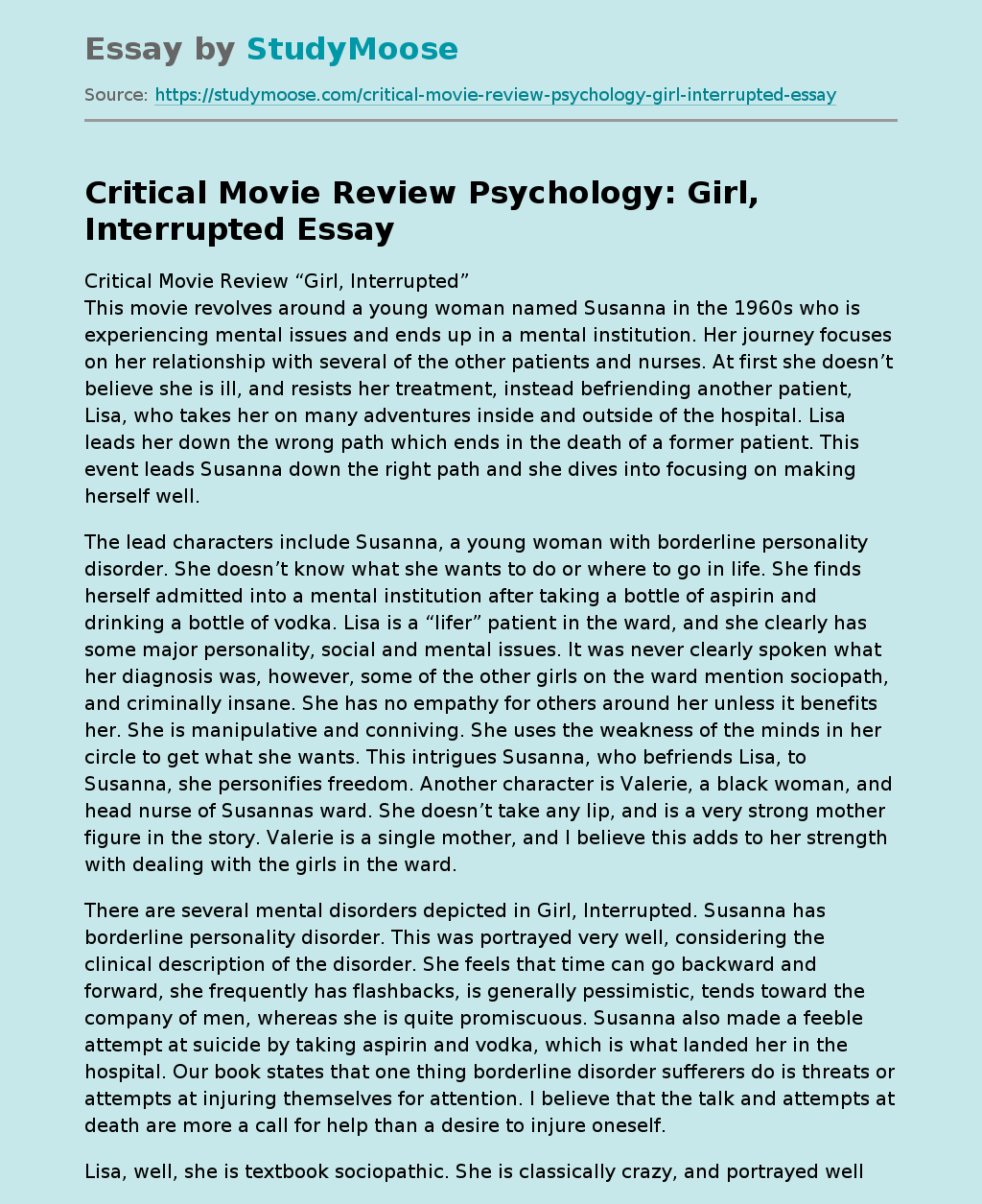