William Wordsworth had a variety of concerns which he expressed in “Composed Upon Westminster Bridge.” He was a metaphysical poet and the theme he writes about in this poem is nature and its relationship to man. He has used a variety of poetic methods which have all helped to shape and enhance the poem such as rhyming couplets, simile, and personification. The poem is powerful, personal and unreserved, the emotion and passion is definitely felt through his writing.

The Main Theme of the Poem

The main concerns he highlights in this poem are the destructive nature of man, the relationship of man and nature, and the negative impact of industrialization on nature.

Don't use plagiarized sources. Get your custom essay on
“ Critical Appreciation of Poetry ”
Get custom paper
NEW! smart matching with writer

Wordsworth made use of similes as one of his poetic methods. In line four of the poem he writes: “This city doth like a garment wear…” Here he compares the city to a garment as according to him figuratively the city wears the beauty of the morning. He uses this poetic method to highlight the extent to which the city exudes beauty in the early hours of the morning while all is silent and the industrial excesses of the day have not yet begun.

Wordsworth in presenting the beauty and tranquility of the morning could be highlighting the negativity that pervades when morning leaves because of man’s intervention. This is all too likely as the area that Wordsworth probes in this poem is the relationship of man and nature and he clearly highlights the negative aspects of this relationship.

This is demonstrated in the following lines of the poem : “This city now doth like a garment The Beauty of the morning;silent, bare” and also in : “Ships, towers,domes, theatres and temples lie open unto the fields, and to the sky;” This has quite an interesting effect as rhythm is described as a poem’s “sound system” and through the poet’s crafty manipulation of the rhymes he is able to give the poem a particular rhythm which enhances its style, value and meaning and draws attention to what it projects.

It is portrayed almost like a song and helps to create visual images like a painting and Wordsworth can be likened to a painter in this way. This is Wordsworth’s literary skill at work and this contributes to the reader’s understanding of his status in literature as one of the better if not the best metaphysical poets known to man.

Personification in the Poem

Wordsworth also employs the use of personification. He says: “The river glideth at his own sweet will: Dear God! The very houses seem asleep;” The reader cannot help noticing the way in which this poet personifies the river and houses describing them as if they are alive and well and capable of exhibiting human capabilities , that of gliding gracefully and of sleeping as if tired. All of this combined with the poet’s extensive use of nature imagery help to bring the subject Wordsworth writes about to life as well increasing its significance.

The Main Problem of the Poem

One of Wordsworth’s main concerns in Composed Upon Westminster Bridge” is the destructive nature of man. Wordsworth presents a vision of nature in the early hours of the morning when man has not yet begun to intervene. He presents its beauty and transcendent nature but he does not stop there. He opens with a line praising the beauty of nature: “Earth has not anything to show more fair:” but closes on a sad note: “ And all that mighty is lying still! ” His comment is that man’s nature is destructive and due to the effect of man on nature stillness and dullness has been the result.

Smoke , dust and noise have become the grim characteristics of nature due to industrialization, and the only time a “smokeless air,” a beautiful atmosphere can be enjoyed is in the tranquility of the morning before industrialization continues. The negative impact of industrialization on nature is one of the poet’s concerns in the poem. In man’s lustful aggrandizing efforts to make progress through industrialization negative effects have been wrought on nature. There is the problem of noise and various types of pollution and this has been caused by industrialization.

The picturesque beauty of natureб Wordsworth describes can only be enjoyed in the morning. For the rest of the day smoke and noise predominates. This could be Wordsworth’s comment on the selfish and cruel nature of man in that through industrialization man chokes and suffocates nature in an attempt to suit his own ends. In Conclusion, the writer has a variety of concerns and poetic methods such as man’s destructive nature, simile and personification. All these concerns and poetic methods enhance the poem’s structure and meaning giving it its significance in the world of metaphysical poetry. 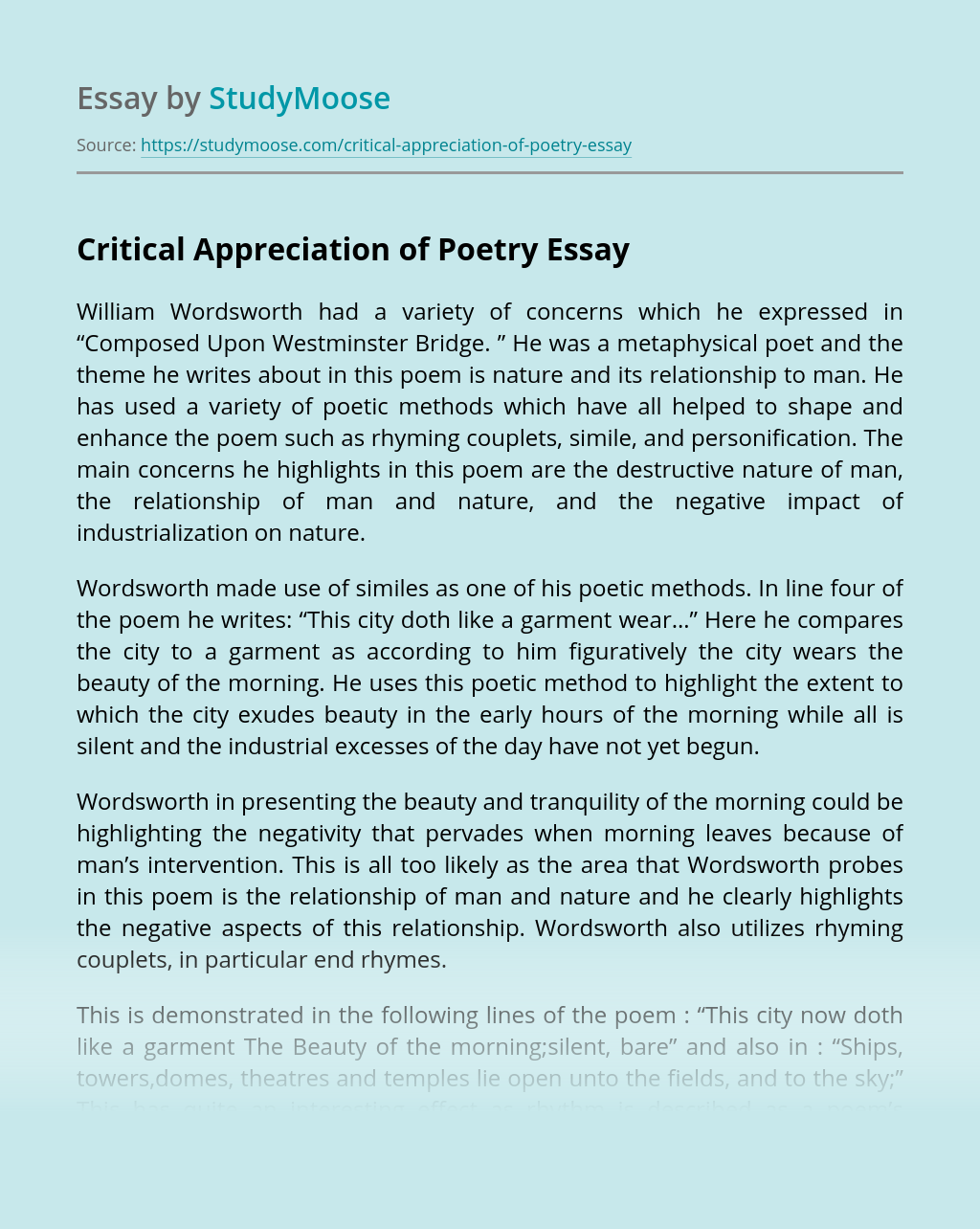