Looking into t1he past is not an easy task, especially when looking back two thousand years. Without writing, it is impossible to speculate the kind of culture our ancestors lived. About 54 A.D. a roman citizen named Tacitus wrote his account about the early German nation. His writing had survived the sands of time and gives insight about the ancestors of the modern Teutonic nations. Tacitus was a man that held many important public offices and considered to be a “front rank of the historians of antiquity for the accuracy of his learning, the fairness of his judgments, the richness, concentration, and precision of his style.

Don't use plagiarized sources.
Get Your Custom Essay on Critical Analysis on Tacitus: Germania Just from $13,9/Page

”1 Due to this, his perspective for the state of culture in early Germany is held at high importance. His views on society and social classes, along with the religion and marriage, is just and extremely detailed. Tacitus accounts on early Germany gives us by far the most detailed description of the tribal society of Germania.

Tacitus himself was in awe of the importance of family, gender relations and society was to the people of Germania.

The early Germanic people were a pure nation. “I concur in opinion with such as suppose the people of Germany never to have mingled by inter-marriages with other nations, but have remained a people of pure, and independent, and resembling none but themselves.”2 This account by Tacitus shows that the Germanic people kept to themselves and were not influenced by the nations around them. This does not mean that they never experienced any other culture, “They have a tradition that Hercules also had been in their country, and other heroes in their songs when they advance to battle.”3 Greek mythology influenced their culture, but the society of Germania was vastly unchanged by outside influence. Although the society seems pure, their religion was similar to the romans and even other distant regions. “Of all the gods, Mercury is he whom they worship most…Some of the Suevians make likewise immolations to Isis.”4 The Germanic people were influenced by other nations, but they approached it differently. They believed it wrong to have temples and confine the gods in closed walls and believe that the wildlife and open nature is where they belong.

“They judge it altogether unsuitable to hold the gods enclosed within walls…they consecrated whole woods and groves, and by the names of the gods.”5 Their approach to the gods reflects how they approach their society. Tacitus viewed the Germanic people as very simple and straightforward. That none of the several people in German live together in cities, is abundantly known. They raise their villages in opposite rows, but not in our manner with the houses joined one to another. Every man has a vacant space quite round his own. In all their structures they employ material quite gross and unhewn, void of fashion and comeliness. Some parts they besmear with an earth so pure and resplendent, that it resembles painting and colors.6 The social classes of Germany consisted of rich, poor, and slaves.

The rich dressed themselves differently than anyone else in the society. “The most wealthy are distinguished with a vest, not one large and flowing like those of Sarmatians and Parthians, but girt close about them and expressing the proportion of every limb.”7 The slaves in this society were treated with dignity and respect, which was different than any other nation of its time and Tacitus makes an account of this. Of their other slaves they make not such use as we do of ours. Each of them has a dwelling of his own, each a household to govern. His lord uses him like a tenant, and obliges him to a pay of quantity of grain. To put him in chains, or to doom him to server labor, are things rarely seen. All the other duties in a family, not the slaves, but the wives and children discharge.8 The slaves were like a prized family member who they can always be counted. Tacitus states something profound for the state of the slaves, “The lord you cannont discern from the slave.”9 Slaves were not the only thing held to high regards. Marriages and the family were a huge makeup of the society of Germania.

Tacitus looks at the Germanic people as a child that is ignorant to the pleasures of sexuality. That the men and women were not corrupted with sexual immorality like Rome was. “They are all equally ignorant, men and women. Amongst a people so numerous, adultery is exceeding rare; a crime instantly punished, and the punishment left to be inflicted by the husband.”10 Not only is the woman punished, but the man that she was with also receives punishment. “To a woman who has prostituted her person, no pardon is ever granted.”11 The children are raised by their mothers and not by the slaves, which Roman noble class always does. “They are all nourished with the mild of their own mothers, and never surrendered to handmaids and nurses.”12 This creates a strong family bond and which in return influences the society and nation as a whole. Tacitus was baffled by this kind of
lifestyle which is vastly different than his. The Germanic people were vastly different in culture and society than another other nation during that time. Just starting with the slaves, one can see that there is a huge difference in the perspective of what it means to have a slave. Compared to Egypt, Germania was a safe haven for slaves.

Egyptians view slaves as the lowest level of society and kept them doing all the work and labor. Where as in Germania, slaves were seen as an employee of the family. Women also were vastly different than other nations. The women of Germania were strong and stood beside their husbands. “She too on her part brings her husband some arms.”13 and “that she is to suffer alike with him.”14 This is vastly different than the women of Greece which were not even allowed to make choices for herself without her husband’s knowledge. Women of Germania were entrusted to everything when the husband and sons went to war. “To their wives, to the ancient men, and to every the most impotent domestic, trust all the care of their house, and their lands and possessions.”15 Tacitus documents these different differences between the Germanic people and the rest of the world. Due to Tacitus being a Roman citizen, a noble man, his tone of Germania hold the people with his regard.

Throughout the examples given so far, one can see that Tacitus respected the people of Germania. Even though the Romans viewed Germanic people as barbarians and primitive, Tacitus respected many of their ways of life. Tacitus even states, “Nor in the whole of their manners is aught more praiseworthy than this: for they are almost the only Barbarian contented with one wife…courted for the lustre of their family.”16 Tacitus documentation of Germania is very just and honest that enlightens the view on barbarians as not as barbaric as pictured. The Germanic people held in high regards, within their society, family, marriage, religion and gender relationships. Even the slaves were in equal hospitality as the free man. Tacitus documentation is exactly what the historians stated, “for the accuracy of his learning, the fairness of his judgments, the richness, concentration, and precision of his style.”17 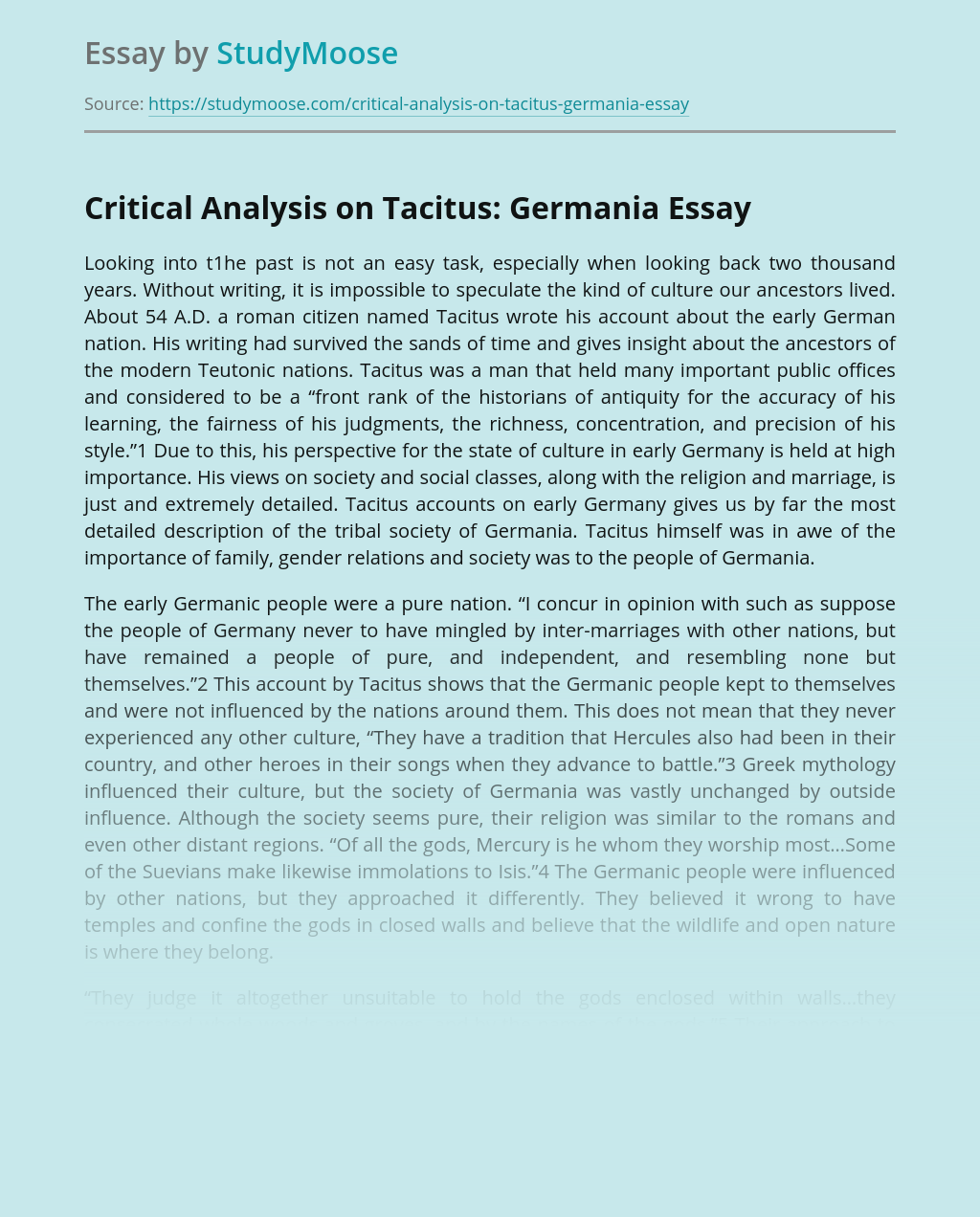 Rate this post “Set during World War II, a story seen through the innocent eyes of Bruno, the eight-year-old son of the commandant at a concentration camp, whose forbidden friendship with a Jewish boy on the other side of the camp fence has startling and unexpected consequences. ” The story of the boy in the...

Get Essay
Comparison of the Unifications of Italy and Germany

Rate this post Both Italy and Germany became unified in the mid to late 1800s after years of unrest that started with the 1815 Congress of Vienna, where both of these countries were split up into many states. One can compare and contrast these unification processes because they had many similarities and differences. In order to...

Rate this post IN SUNNY SPAIN(1882-1885) * Rizal’s Secret Mission To observe keenly the life, culture,, languages and customs and laws of the European nations in order to prepare himself in the mighty task of liberating his people. – Djemnah with 50 passengers on board * Secret Departure for Spain Paciano, uncle Antonio Rivera, his...

Rate this post Anna Funder’s 2002 work of literary journalism, _Stasiland_, relates her journey through a “land gone wrong”, the German Democratic Republic. Separated by the Berlin Wall and political ideology, East Germans lived under the ubiquitous and omniscient control of the Stasi, the secret police, whose “job it was to know everything about everyone”....