Thomas Hardy is on of the brightest representatives of English realism at the end of 19th and the beginning of 20th century. At that time, a new stage in the development of the English literature began, characterized with the conflict between the supporters of realism and the new modernist artistic directions. He learned from his predecessors to raise important and interesting problems, to tell interesting stories , to portray interesting characters and to describe the environment.

Don't use plagiarized sources.
Get Your Custom Essay on Critical Analysis of Thomas Hardy’s Novel Tess of the D’urbervilles Just from $13,9/Page

Hardy is defined as classic of English literature as well as regional novelist, master of personalities and circumstances, the first real artist of Nature and human nature. The general features of his novels are pessimism, tragedy and fatalism . These characteristics also define Hardy as the first creator of tragic novels in the English literature . The roots of this worldview go back in to his homeland full with remains of ancient times and also in his inability to understand the social changes occurring in England.

The disappointment of the village atheist from the big city, regarded by him as the source and symbol of evil, disintegration of the patriarchal peasant family, which he idealizes as a symbol of strong morality and real moral virtues becomes central theme in his novels .

That is fully represented in Tess of the d’Ubervilles. The novel belongs to the group of novels called for character and circumstances. It can be defined as social, because it is placed in a specific social context, but it can also be defined as moral and psychological. It is like a monograph of a personality but it is also a monograph of a period as well. A tragic story stands in the center of the novel and that is the story of the main female character Tess Durbeyfield and her life filled with plenty of unusual and exciting meetings, adventures and misadventures. The novel is divided in several parts , called phases . They are named : The Maiden , Maiden No More , The Rally , The Consequence , The woman pays , The convert , The Fulfilment . With the titles of each phase the author directs to the main plot points and sets basic suggestions about what is happening. The novel covers four years of the life of Tess. Several images are shown- the homeland of Tess, her house, the farms, the church and the opposition village-city. It is no coincidence that Hardy is called master of personalities and circumstances.

In the novel he uses a dramatic form , which means disclosure of the relationship between group of characters (Alec, Tess, Angel) and epic form : story disclosure of a person (Tess). This is dictated by his desire to better express the problem of human destiny and also to express his strongest side – the ability to trace the universal connection between human and the surrounding environment. Hardy introduces unknown and ordinary people out of touch with the turbulent stage of life in the big city and he endows them with strong passion and spiritual nobility. They face the perpetual problems of life and death , the power of human passions and the human happiness. With the transform of the limited provincial scene and its small people into a great drama with universal significance his artistic power is really shown. The story develops in a dramatic order- the events follow each other in a specific rhythm which leads to the denouement.

The stories are told in a simple and clear manner because the characters involved are fully developed . Tomas Hardy succeeds to present his characters in a comprehensive manner and he achieves that with the ability to observe each gesture and with sensitivity to all that is unique to an individual. The main character of the novel is Tess Durbeyfield. She is a beautiful, pure and kind , very attached to her family, responsible and hardworking. Right from the beginning Hardy specifies the type of the character and implies that there is something different about her and her fate is predetermined. With that the character becomes predictable in a sense for the reader and it is expected that she will succumb to sin. One of the events in the first part- the death of the horse which Tess feels guilty about becomes a catalyst for the change in her life. Under the influence of her parents and sense of responsibility, she agrees to leave her home and accept the challenges and responsibilities of the independent life in the estate of Alec d’Urberville. This moment in the novel acts as a inception of the action because it puts an imprint on the further life of the heroine.

Placed in an unequal and humiliating relationship – worker-master, she is assaulted by Alec who not only violates her honour but also her feelings. Tess tries to be strong , returns to home and gives birth to the illegally born child and reconciles with the reprehensible attitude of the community. But after the child dies she makes a choice and tries to seek her happiness. On the new working place the fate turns her good side towards the girl and Tess meets her first and big love- Angel Clare. This love restores the true nature of Tess. She becomes more sensitive and gives away warmth and kindness to everyone around her. The two lovers have a chance to restore their honour, dignity and the joy of life but it is radically conflicting with the requirements of the age, full with prejudice. For Angel and his mother, Tess is not pure and virtuous.

Abandoned and rejected by her loved one, Tess again seeks salvation in her home and family to be rejected again. The disappointment of Angel , the loneliness and misery makes her go to the first man in her life- Alec. Tess does not fit entirely in the image of a victim because she makes her choice alone this time but on the other hand she is a victim because she is pressed by the circumstances.

Her decisions are accompanied with doubts and concerns. Her clash with different manifestations of love and different understanding of moral values and dignity cause deep and painful self-analysis. The assessment of her own life is ruthless and she does not find mercy for herself. For Tess is enough knowing that she is going to die loved by Angel and get her retribution to Alec by killing him. The death of Tess is required by the genre and it is not unexpected. With the blessing of the marriage of her sister with Angel, the young woman rises above the prejudices of the society.

Do you accept the heroine’s qualification as a “pure woman”? Why (not)?

In the first and the second part of the novel the answer is yes because the ruin of Tess happens by force and due to her innocence and trustfulness rather than depravity. But on the second encounter with Alec, Tess makes an unforgivable compromise which defiles her purity. If there is something pure in Tess that is her love and soul. 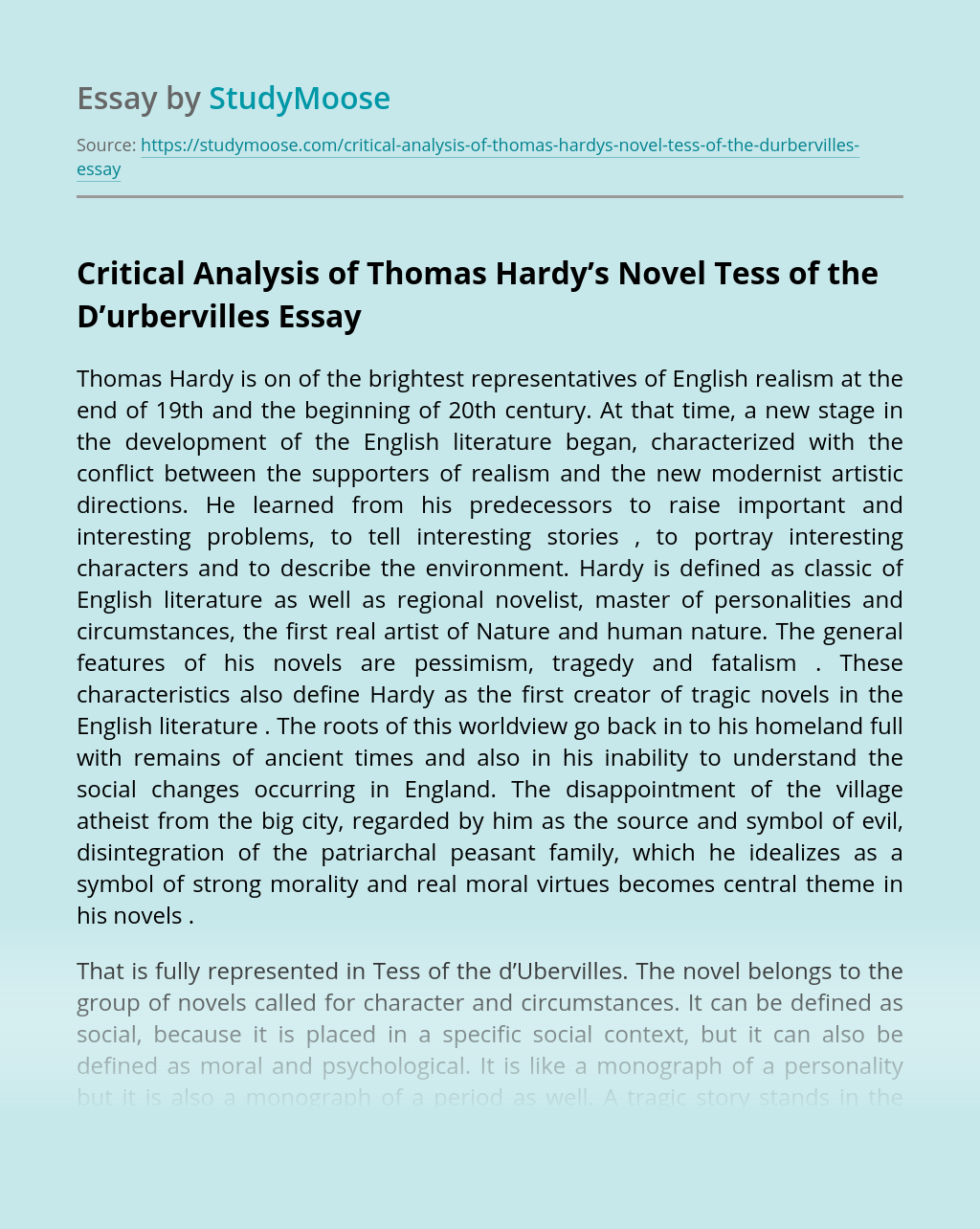 Rate this post “Eve’s Diary” is a satirical account of the days in the Garden of Eden. Twain recounts the well-known tale of Genesis through a series of journal entries written by Adam and Eve; these personal accounts make for an entertaining and thought-provoking read. Twain’s personifications of gender stereotypes are easily identified but lead...

Rate this post There has been a lot of discussion regarding the increase of minimum wage across the nation. Currently, the wage is set at a low amount of $7.25 an hour. In today’s society it is almost impossible to live on only an income of $7.25 an hour especially for those who are raising...

Get Essay
A Soft Drink Tax According to John Stuart Mill

Rate this post The Coca-Cola brand has built itself into a staple of American culture. This is a terrifying thought for public health advocates who see Coke and other soft drinks as being major culprits behind a growing national health crisis. Empirical evidence shows that over-consumption of soft drinks clearly causes harm to the individuals...

Why the company should use ERP system?

Rate this post This report is prepared as a Tesco Singapore company IT system consultant, the company has identified the various benefits of effective Information System. However the company has several different systems that are completely outdated as well as have adopted a temporary approach. Since today, several firms rely on efficient and correct information...

Rate this post I have failed many, many times, and I see absolutely no shame in saying that, because why should we feel any embarrassment in admitting that we attempted to achieve success? At the very least we tried, for the worst failure of all is the failure to try. That is the first rule...