Critical Analysis of the Poem “Breaking Through”

The poem Breaking Through written by Myrna Peňa-Reyes is very profound in terms of its appeal to the reader. The poem is all about the filial relationship between a son/daughter and a father.

The poem basically revolves around the father and his son/daughter. The plot of the poem tells the reader that a certain persona in the first stanza receives a parcel that came during that morning. The persona lamely opened the small box and it takes for him/her a short labor to undo the tie.

Don't use plagiarized sources. Get your custom essay on
“ Critical Analysis of the Poem “Breaking Through” ”
Get custom paper
NEW! smart matching with writer

Although the box is just small, it is being tied skillfully and very well. It is not stated in the first stanza where the package does came from but lately, it is being mentioned that it’s from the persona’s father. The package box came all the way across 10, 000 miles of ocean. While opening the box, the persona can feel the love of his/her father that binds them together.

Breaking Through if examined could be the literal meaning of breaking through or the undoing of the strong thread of two or three strands that are being twisted together tied around the package box received by the persona from his/her father. The title its self could be the connotation of the applied effort of a certain persona in the poem in executing a little labor by untying the box. This effort of the persona in the poem is very present from line 1 to 7 of the first stanza. It says that, “Haltingly I undo the knots around your parcel that came this morning.

A small box should require little labor, but you’ve always been thorough, tying things tight and well. The twine lengthens, curls beside the box.”

The title Breaking Through is the metaphorical representation of the filial devotion of the persona to his/her father. The title could be the denotation of the persona in the poem of the lessons that he/she had learned from his/her father. It could also mean “love” as supported from the last two lines of the second stanza. The line say that “my father, this undoing is what binds us.” Although it’s not directly mentioned that love is the breaking through, it is showed indirectly through subliminal meaning of the phrase “this undoing is what binds us.” What makes the father and the persona bind? The clear and not vague answer is love, nothing more.

The author also used symbols in the poem. The first symbol is the box. As an assertion, the box highly symbolizes the love of the father to the persona that is being away from him. It is distant because the author mentioned in the last lines of the first stanza. It says that the package box came across 10, 000 miles of ocean. The box also represents the longing of the father to his son/daughter that is away from him for a long time. Through the box, the father extends his warm filial love to his son/daughter.

The knots around the parcel also represents that the father’s love is true and fair to the persona. The love that is true and fair can be supported by lines from 6-7 of stanza 1 that says “but you’ve always been thorough, tying things tight and well. The twine lengthens” and lines from 11-12 of stanza 1 that says “you hoped the package would hold its shape across 10, 000 miles of ocean.” In those lines, the father of the persona tied the knots thoroughly to keep the package in its original shape from the father’s home until it reaches the persona’s hand. It only signifies that he wanted that his best regards and love would remain in tact after journeying across 10, 000 miles across the ocean. The knots also symbolized of how patient the persona’s father, it definitely reflects the he tied the box.

In the poem, there is a mention of belt in the 10th line of first stanza. It says, “once your belt slapped sharply against my skin,” it is being enclosed in the parenthesis for further emphasis. The belt that the author projects in line 10 only symbolizes that the persona’s father is a man of discipline. He slaps the persona sometime in his/her childhood to discipline him/her. Through the belt, it shaped the persona for he/she no. through the father’s slapping, the persona learned things between bad and good, and right or wrong. The belt also symbolizes display or the manifestation of power. It only shows that during childhood of the persona, he/she exists in the patriarchal world. Indeed, during the persona’s childhood, he/she exists in te patriarchal society for he/she experienced being beaten by the father.

In a contemporary setting, if the author is mentioning about across 10, 000 miles of oceans, the first that comes into the mind of the reader is that, the persona is situated abroad or in states. If being assumed that the father is in Philippines, maybe the persona is in West Asia, America, Europe, Australia and others. The reader does not also know if the persona is working abroad, married, touring and etc. because it’s not directly stated. What is very vivid in the context is that they are away from each other and they haven’t seen each other for a long period of time.

Characterization of the father in the poem is also very effective. In the context, the father is portrayed as caring for he sends the persona a package box although its very far. Unlike other father figure, the father in the poem is very mild-not ruthless and cruel. Though there is a use of belt slapping in the poem, it is being done to discipline his child. The father did do it for a good purpose, for the benefit of the child when he/she grew up but not in the abusive manner. The father figure in here is perhaps a gentle and amiable father.

The author also used strong images to convey the meaning of the poem. The delivery is very suggestive images like the undoing of the box; the scene is very vivid and understandable. Through this clear description, it brought the reader the catharsis of emotions or eliminating its complexity, the author effectively carried out the essence and meaning of the poem.

In terms of form and structure, the author unconsciously celebrated the form over the content. Like T. S. Eliot, she has done it for she chose to write in free verse or blank verse. She does not follow rhymes and meters, what she did is the total deviation of the traditional metered poems. The style is very contemporary, or maybe it belongs to the Romantics.

In general, the Breaking Through is a superb poem. It tackles a rarely touched theme in poetry, filial love. Through this theme, it makes the poem unique and notable.

Critical Analysis of the Poem “Breaking Through”. (2016, Mar 09). Retrieved from http://studymoose.com/critical-analysis-of-the-poem-breaking-through-essay 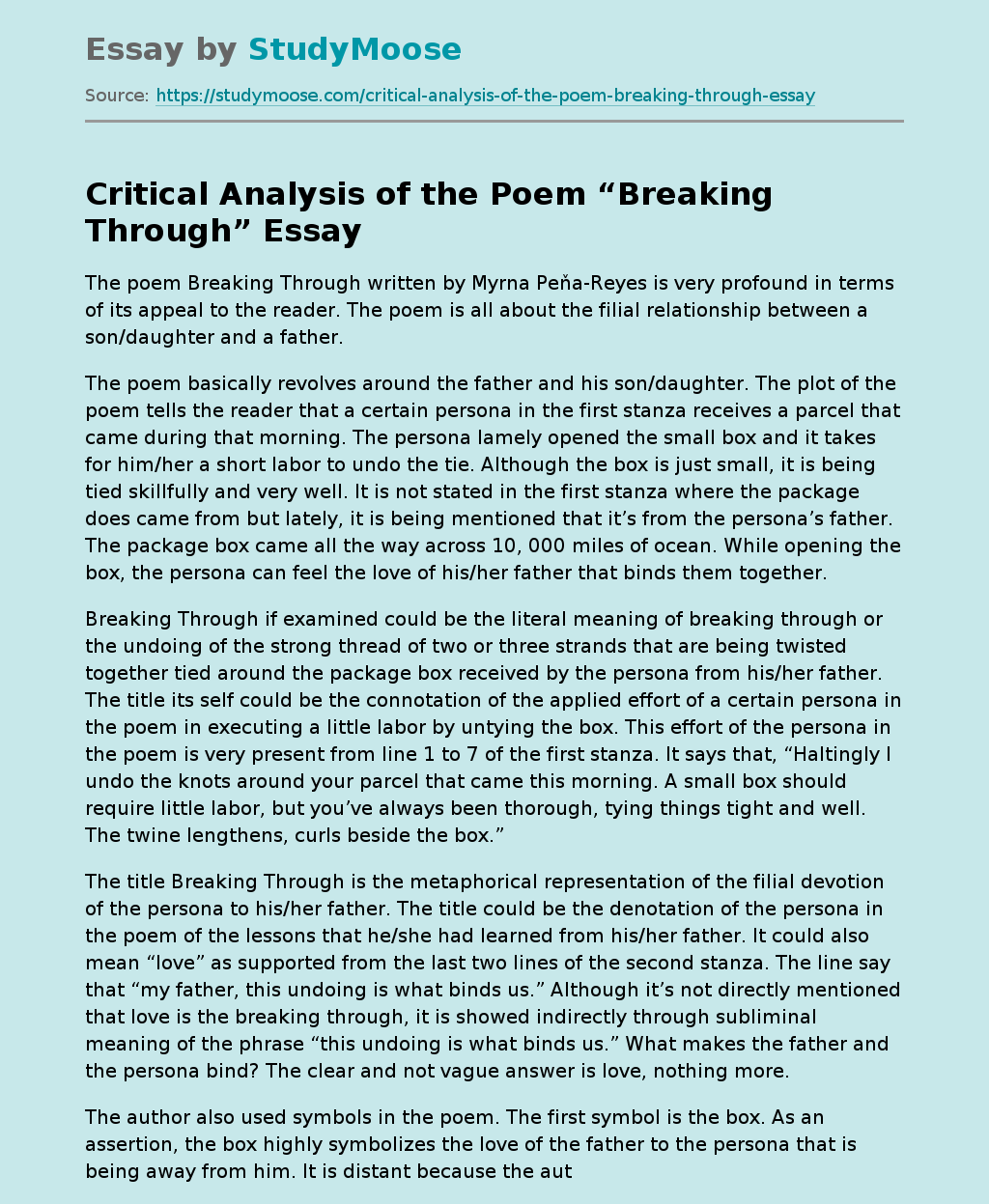