Cristiano Ronaldo once said, “Your love makes me strong. Your hate makes me unstoppable.” These are the words that still vibrate into my ears today. When I was young, my childhood dream was to become a professional soccer player. Soccer was my passion: I fell in love with the game from the moment my father, Rahul, gifted me my first soccer ball during my 7th birthday.

My mind and soul became obsessed with that ball; during the day, I would shoot imaginary game-winning shots in my soccer ball backyard, and I would sleep with the ball with my soccer socks on at night, dreaming I was playing alongside David Beckham, a former English soccer player.

Don't use plagiarized sources. Get your custom essay on
“ Cristiano Ronaldo My Hero ”
Get custom paper
NEW! smart matching with writer

However, I was troubled by those letters engraved on the so-called “magical” ball, CR7. I finally asked my dad the meaning of those words, and that moment was when I was introduced to Cristiano Ronaldo dos Santos Aveiro.

My dad gave me a boring lecture on the autobiography of my future idol.

Often regarded as the best footballer in the world by many football enthusiasts, Cristiano Ronaldo, a professional soccer player, currently plays as a center forward for an Italian Club Juventus and the Portugal National Team. After my father almost made me asleep during his dull presentation, I became Ronaldo’s biggest fan. As the blistering, flaming sun dribbled across the Warner Robins skyline and melted into the pink and orange clouds, a young Cristiano Ronaldo appeared in the backyard of the Patel’s house.

He was wearing the iconic blue striped Real Madrid (Ronaldo’s former club) jersey paired with white Nike soccer shorts and socks. The young man was training dribbling moves and the trademark stepover of Ronaldo. Whenever he scored a penalty or a free kick with his CR7 Mercurial Superfly boots, he would celebrate in Ronaldo’s signature pose of modern football: a charging 180 turn and landing in a spread-eagle fashion. This alluring dream finally came to a halt, and I woke up inspired by what Cristiano taught me. I soon realized my 10th birthday was around the corner, and it was time for a wish that I hoped my dad would fulfill: a one-on-one conversation with my hero, Cristiano Ronaldo. I was heartbroken after my father rejected my idea. However, he said that you can learn so much from Cristiano because he represents the ideal athlete. If I were to have a conversation with Cristiano Ronaldo, I would ask him questions relating to his success, physique, and achievements.

First and Foremost, my first question to Ronaldo would be about his secrets to success. Cristiano Ronaldo is known for his hard work and dedication to the game of football. He provides an example to young teenagers like me of how talent is nothing without hard work. Born to an alcoholic father and a mother believed he was a mistake, Ronaldo grew in the streets of a small Portuguese Archipelago, Madeira. No one would have thought that this kid would later become the richest and the most followed athlete in the world.

Ronaldo’s father was a kit man for a football club where he ended up initiating his football career. His attitude of putting his heart and soul to the game is the quality I wish to learn from him. Plus, Cristiano’s competitive instinct of being the best in the world is probably the reason many adore him as the most successful athlete of all time. To become the best footballer the world has ever seen, Ronaldo spent countless hours in the training gym practicing personal soccer skills, such as dribbling moves, headers, and long-shots.

During my training session, I try to apply the same mindset, which I call the “CR7 special”. Unlike other notable footballers, such as Lionel Messi, Neymar, or Wayne Rooney, Ronaldo never fails to acknowledge his peers and family. When Ronaldo first entered the professional football scene at Old Trafford in Manchester, England, the football manager Manchester United Sir Alex Ferguson sculpted the young rookie into the beast he is today. Cristiano considers him as his “football father”.

Also, he ended his relationship with a model Irina Shayk because she had a problem with Ronaldo bringing his mother everywhere. He gave a fitting reply to his girlfriend which shows the immense respect he has for his mother: “I could leave you home but not my mother and things got bad between us, but I don’t hold any regrets”. Tolerance is one quality that I wish I had. Ronaldo’s greatest strength is to handle criticism; he uses the criticism from others as motivation to prove his doubters wrong. It enables him to work even harder and is his ultimate driving force to be the best. The list of qualities that Ronaldo has goes on and on. However, hard work, dedication, tolerance, and respect and the ones that I know him the most by.

Moreover, Cristiano Ronaldo is deemed as the fittest athlete in the world. His name has become a synonym for an athletic, lean physique. Any sports enthusiast in the world would wish to have a body like CR7’s. Personally, I have never been the strongest or the most muscular kid; most of my friends have biceps tear their sleeves. Obviously, a muscular physique is essential to any sport, so my second query to Ronaldo would be how he developed his physique.

During his starting years at Old Trafford under the tutelage of Sir Alex Ferguson, Cristiano underwent a major physical transformation to meet the heavy demands that the professional level would bring. No matter how many push-ups or crunches one performs, the results will not come unless one changes his or her diet. Ronaldo’s strict diet consists of eating simple foods, such as pure fruits and vegetables, and avoiding processed, canned, and sugary foods.

Ronaldo is also a non-alcoholic to express his love for his father, and he donates blood every year. At the age of 13, I start following some of the dietary restrictions to become healthier and transform my body from a skinny newbie to a ripped athlete like Cristiano. Many physicians and sports doctors consider Ronaldo superhuman. He possesses the body of a 20-year-old and continues to improve his physique day by day. During his physical exam when he joined Juventus in July 2018, Cristiano Ronaldo, at the age of 33, has just 7% body fat and 50% muscle mass, which is 5% higher that an average professional athlete.

He also had the fastest sprint time, 21.1 mph, during the 2018 FIFA World Cup. If performing at the highest level at the age of 33 when most soccer players retire or become rusty is not superhuman, then I do not know what is. My soccer play is more aggressive and attacking than most players. Luckily, Ronaldo adopts the same play style, and I still have a lot to learn from him. Ronaldo’s superhuman strength and his 6’ 1’’ height enables him to have an edge in winning aerial challenges or headers. This unique attribute makes Ronaldo the target-man and a dangerous threat to the opposing team. During my soccer games, I try to play a central role in my team by creating chances for my teammates, which I witnessed through Cristiano.

Furthermore, Cristiano Ronaldo holds almost every single record in the game of football. Even though I do not have a room full of golden trophies like Ronaldo, his legacy motivates me to be the greatest soccer player I can be. Thus, my last question to Cristiano would be about his greatest achievement. It is no wonder by Ronaldo is regarded as one of the greatest soccer players of all time. He has won 26 major trophies during his career, including a record five Ballon D’ Or awards (the “MVP” of soccer), five La Liga League titles, five UEFA Champions League titles, and one UEFA European Championship.

In addition, he also holds the record for scoring the most goals in many European premier leagues. The amount of goals he scores for club and country increase every game but is currently at 670. Outside of football, Ronaldo is the world’s highest-paid and the most famous athlete with over 325 million followers on all social media platforms. I am pretty sure Ronaldo does not have one greatest achievement because there are just too many to choose from! However, I feel like Ronaldo’s greatest achievement is the legacy he built in the Champions League.

The UEFA Champions League is the most prestigious competition of European football where top-tier division clubs challenge to lift the silver trophy. Ronaldo, the king of the Champions League, has made it his own playground! He is the top goal scorer of the league with 120 goals and has led his former club Real Madrid to a Champions League title three years in a row. Ronaldo’s Champions League Legacy is comparable to how Michael Jordan dominated the game of basketball. I truly consider myself lucky because I am living in an era where Cristiano Ronaldo set unprecedented levels of glory.

At last, the name Cristiano Ronaldo has become a symbol of a true champion, setting precedents for the next generation of athletes to match. He has continuously proved that age is just a number, whether it be his intense training regime in the gym or his unmatched attributes, including speed, skill, and stamina. His work ethic and mentality to the game set him apart from other soccer players. I hope Ronaldo’s legacy is long lasting and continues to have a drastic impact on young athletes. There are so many life lessons and skills that one can learn from his game and style. Ronaldo motto: “I never tried to hide the fact that my only goal is to be the best”. 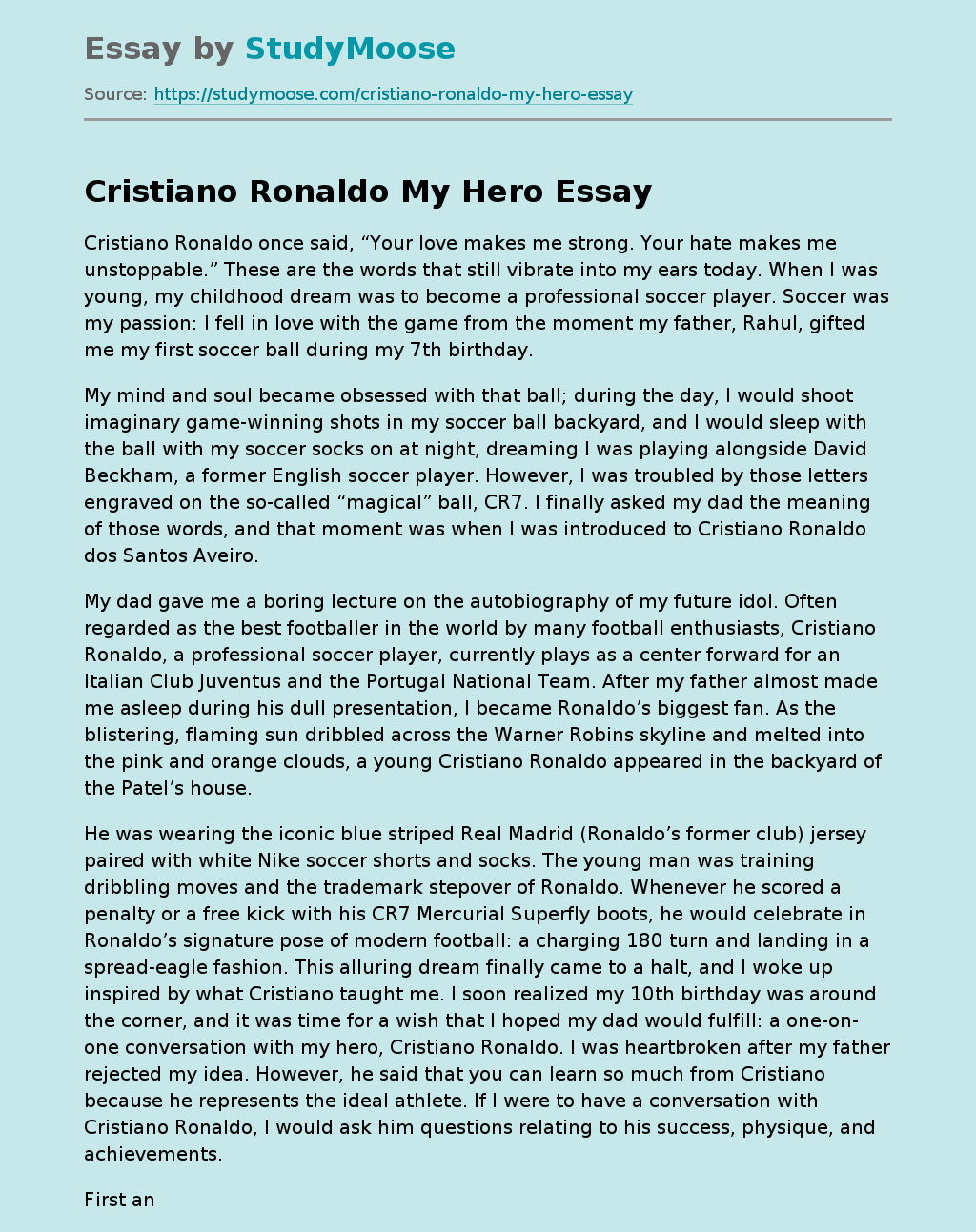