Prison, non-custodial sentences and rehabilitation seem all failed in reducing recidivism; however, there is little and limited evidence to support non-custodial sentences, as well as some people think if rehabilitation could be implemented effectively, it would work. Although the advantage of prison is keeping our society from dangerous people, when it comes to reducing recidivism rate, the effect of prison is disappointing. The public usually think that imprisonment is safer for communities; however, it appears powerless to deter inmates from committing crime again.

Don't use plagiarized sources. Get your custom essay on
“ Criminology Theories on Reducing Recidivism ”
Get custom paper
NEW! smart matching with writer

In the article, “Study shows building prisons did not prevent repeat crimes”, Fox Butterfield (2002) cites a large-scale study of recidivism from the Bureau of Justice Statistics, which investigated up to 272,111 former prisoners in 15 states during the first three years after being released. It found that 67% of inmates broke the law again in three years right after their release in 1994. It is surprised that it does not make any difference to recidivism rate which was studied in 1960’s, and it is even 5% higher than the study done in 1983.

In addition, it indicated that the more rearrest records a criminal has, the higher recidivism rate he has. The inmates who have more than 15 prior arrests have 82. 1% of recidivism rate. Nevertheless, according to Emily Kingham’s article (2006), she believes that prison forces offenders to regret and reflect on their behaviour; as for the reason that criminals cannot reject the temptation of committing new crime is because of inadequate provided support. In spite of this, some experts have admitted that prison does not work in terms of reducing recidivism rate (Considering the alternatives 1978; Finckenauer 1988).

While some people argue rehabilitation is also failed in reducing recidivism rate, some authors counter that if government could support rehabilitation, recidivism rate would decrease. According to the article, “Prison”, James O. Finckenauer (1988) cites some studies, which shows that even though the government has already provided with good rehabilitation programmes, they cannot achieve reformatory of inmates.

On the other hand, this position is contested by Joan Petersilis (cited in Butterfield 2002), a professor of criminology at the University of California at Irvine and an expert on parole, who says that state governments spent such little money on rehabilitation programs that inmates do not receive sufficient help with drug addition, work skill and preparation for a new life, which may lead increasing recidivism rate. Butterfield (2002) further cites the statement by Mr. Travis, who also argues that criminals return to crime. 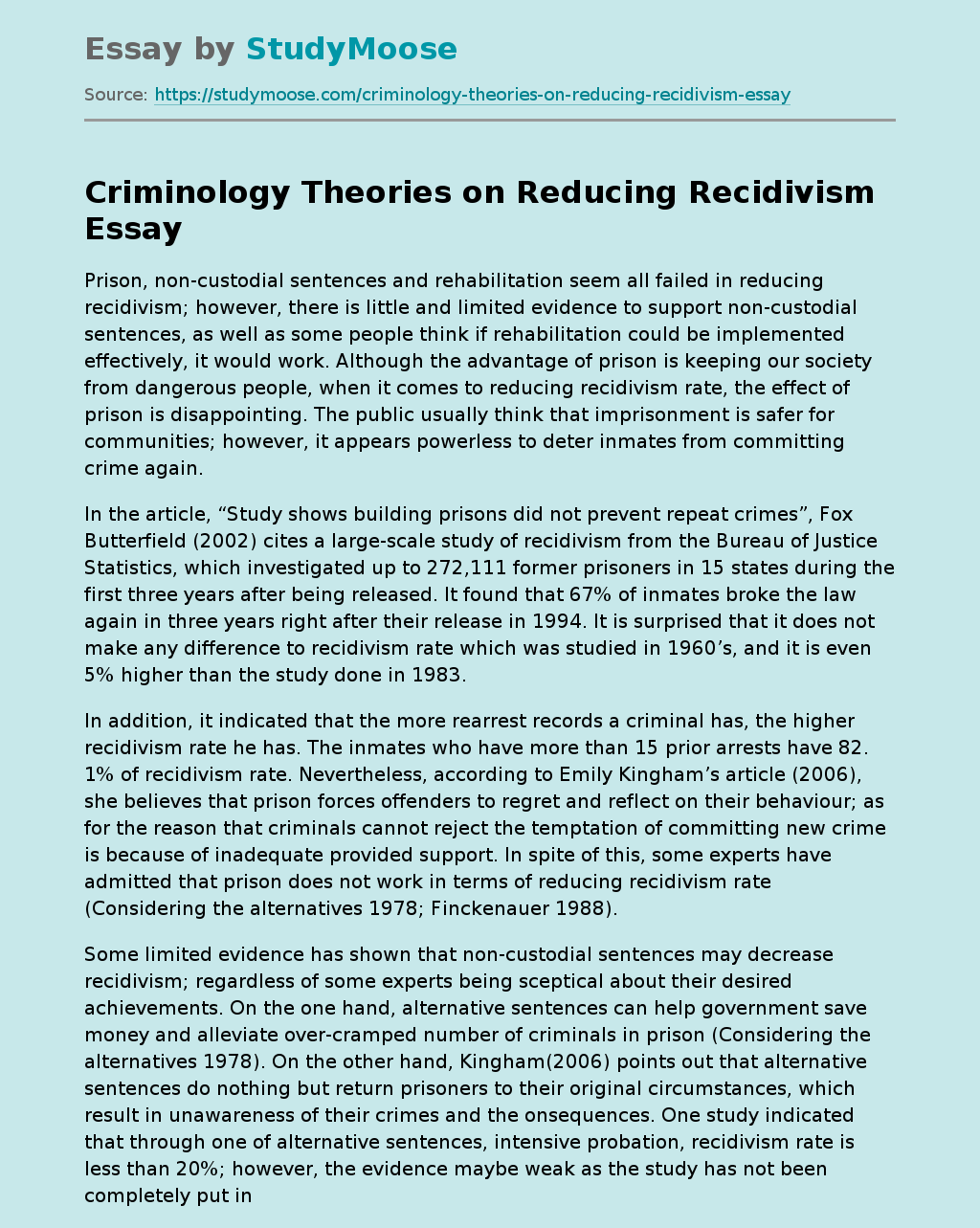