Criminal Psychology: Study of the Behavior, Intentions, and Serial Killers Itself

Criminal Psychology is a mystery because it´s the study of the behavior, intentions, and serial killers itself. ¨ It can be defined as a science, which helps investigative situations in fulfilling their mission more efficiently by applying a psychological knowledge to it¨. Criminal psychology is a way for people to get an insight into the mind of a criminal and how their minds function. A criminal’s brain is different from a normal person’s brain. For instance, when John Wayne Gacy was interviewed, he recounted when he wore his clown costume it brought him back to a child-like state of mind.

Don't use plagiarized sources. Get your custom essay on
“ Criminal Psychology: Study of the Behavior, Intentions, and Serial Killers Itself ”
Get custom paper
NEW! smart matching with writer

Gacy’s Pathology, couping with his potential ASPD, explained of offender motivation, frustration-aggression, social control theory, and psychosexual aggression theory. ̈ Although serial killers can exhibit abilities to self regulate through their calculative tactics and cooling-off period, it is not a profound indication of impulse control ̈ (The mind of a criminal). Counseling professionals have not developed an effective means for treating ASPD.

̈ Many of the treatment options can cause or exacerbate symptoms of a psychological illness depending on the therapy practices making the management of this disorder much more difficult ̈ (Hatchett, 2015).

The most common type of disorder for a criminal is antisocial personality disorder. This can cause violence and outbursts of aggression. ̈ Antisocial disorder, violent, and criminal behavior, and drug abuse disorders share the common antecedent of early aggressive, disruptive behavior.¨ (Psychopathology). When our thoughts and emotions are disordered and in some cases disconnected, our behavior can become antisocial. In most cases, antisocial personality disorder can come from our childhood.

“These conditions characteristics and their associated mechanisms will be explored with a focus on the syndromes, symptoms, and behavioral consequences that are primarily associated with interpersonal antisocial behaviors and person to person enacted criminality.¨ The Antisocial behavior associated with psychopathology can go from being abnormal into the realm of the criminal. In most cases the antisocial disorder is mild, where it would not get to the point were the aggression starts and the violence, but in some instances in serial killers cases that antisocial personality can become severed. The two most infamous serial killers have this disorder, John Wayne Gacy and Ted Bundy.

Ted Bundy is one of the most infamous serial killers of all time. He was interviewed before his day of execution. Ted Bundy was addicted to pornography, he said, ¨Like most other kinds of addictions,´ he said,´ I would keep looking for more potent, more explicit, the most graphic kinds of materials¨ (30 years later). He was most known for his killing of people and pornography. He has lived in prison for a long time, and everyone that he has ever met that was in the same position, was deeply involved in pornography. The FBI has done its own studies on serial homicide, and the most common interest among these serial killers is pornography. With this interview, it had a lot of effects on Bundy’s state of mind and how he feels now about what he has done. With this interview it has changed his life, it has revolutionized his relationship with his family, and he only regretted one thing, is not having this conclusion to his life 15 years ago.

¨ I was essentially a normal person. I had good friends. I lived a normal life, except for this one small but very potent, very destructive segment of it that I kept very secret, very close to myself, and don’t let anybody know about… I think people need to recognize that those of us who have been so much influenced by violence in the media ~ in particular pornography violence ~ are not some kinds of inherent monster.¨

At first, all serial killers start off as normal people, no suspicion, but they all have that one deeply destructive trait that will slowly eat them up inside until they can’t take it anymore and they crack. Some are good at hiding for the rest of their lives and some are so far gone that there’s no hiding, and some go in and out of that stage just like Bundy. Seventy-three psychologists from the University of Kentucky did a study on Ted Bundy in 2007, and they all agreed that Bundy, in fact has an antisocial personality disorder (The list of Ted Bundy´s Potential mental health disorders).

Nearly 80% of this team have come to believe that Bundy had a type of model of this disorder. They were checking off all the principles in the time of the diagnosis. Another disorder that is almost the same as the antisocial disorder but it’s way more extreme, it is Schizoid disorder. People with SPD are in touch with reality and make sense when they speak. There are certain traits that psychologists tend to see in people like this. Symptoms of this disorder can cause, lacking empathy and remorse, they can become manipulative, compulsive, and incapacity to maintain mutually intimate relationships. He also has signs of psychopathy which can lack of empathy and being out for one’s interest even though the interest of others gets trampled underfoot. There can be different traits for psychopathy like pathological lying and being superficially charming. 95% of the psychologists at the University of Kentucky also believed that he had a narcissistic personality disorder. He also had Bipolar personality disorder as well. “Dorothy O. Lewis, MD, a psychiatrist from New York University Medical Center who specializes in evaluating violent offenders, tried to save Bundy, (and other criminals), from death row. Her argument: Bundy suffered from a bipolar personality disorder, a mental illness characterized mainly by extreme mood swings.¨

According to Salt Lake City newspaper Deseret News, an investigator told Lewis that Bundy and he were having a conversation, Bundy suddenly became strange, the investigator said Bundy did a metamorphosis, a bit of a body and facial change, and… almost an odor emitted from him. ̈ Lewis reportedly noted that he could switch from euphoria and compulsive talking to anger followed by long periods of sullen silence, and showed examples of a wide range of Bundy ́s doodles.¨ A majority of the same groups who diagnose Bundy with his other disorders have also diagnosed him with borderline disorder. This personality disorder affects anywhere from two to six percent of the U.S. population. This disorder is usually in women but it is very rare in men. A person with this disorder typically has unstable personal relationships (swinging from one extreme to the other). They act impulsive, participate in self-harm, have periods of intense depression, suddenly bored, and can experience a change in self-images. Bundy also has an addictive disorder, while he was in an interview he self-diagnosed himself as a porn addict. He is also diagnosed with Machiavellianism. ¨ They see people as objects for use and manipulation.´ the podcasters said. ´ They will have normal amounts of empathy unless they have traits of psychopathy ́~ which of course, you know by now that Bundy definitely had. ̈

John Wayne Gacy is also one of the most infamous killers of all time, just like Ted Bundy. Gacy ́s life story and what led up to his series of killing can give an insight into how he became who he is. When Gacy was younger, his childhood was filled with physical and mental abuse from his father, John Wayne Gacy Sr. He was a severe alcoholic and he made it very clear that he was disappointed in his son for his lack of masculinity. While Gacy was in prison his father died of cirrhosis in the liver due to his drinking problem. ¨ Upon learning of his father’s death, Gacy seemed to snap, believing his father died from the shame of Gacy´s conviction of sodomy, (¨John Wayne Gacy Biography,¨ 2015).¨ When he snapped, something clicked, he became violent with inmates and repressed his desires for young males. When he was on his killing spree, he usually looked for younger men and young boys. ̈ Despite Gacy ́s exterior success, behind closed doors, he would lure young men and boys to his home where he restrained, rapes, and murdered them ̈ (The mind of a Criminal). His murder track lasted almost six years with any substantial suspicion from authorities. Between those six years, he killed thirty-three young men and boys from 1972 to 1978. When his wife divorced him, that’s when he started to kill. With his personality, his ego really helped him hold the position of authority and by which he gained control over others. This would help him lure his targets in and control and flatter them. ̈ John Wayne Gacy ́s manipulatively charming nature, heinous offending, and subsequent lack of remorse for his crimes are indicative of an antisocial personality disorder.̈ The self-control theory is an individual’s pathway of offending is measured in the ̈salience ̈. ¨The self-control theory explains the lack of impulse control as an absence degradation of parameters that negates the will to kill in the occurrence of a murder ( Morris et al., 2011). ̈  A separate perspective corresponds with his aggression – frustration and self-control theory is the psychosexual perspective of aggression (Knight, 2007). When he was finished with his victims he would stuff his victim’s underwear and their other clothes in their mouths and have sodomy with sex toys, and eventually suffocates them with tourniquets.

Criminal psychology is an interesting topic, it gives an insight into the mind of a criminal. It helps people understand what it’s like being a serial killer, and what they go through on a day to day basis. The brain of a criminal is different from the regular ordinary person. To normal people, criminals are interesting and people become curious about what it’s like or why they do what they do. Criminal psychology can help people understand and can give people information on their backgrounds and why they are who they are.

Criminal Psychology: Study of the Behavior, Intentions, and Serial Killers Itself. (2021, Apr 02). Retrieved from http://studymoose.com/criminal-psychology-study-of-the-behavior-intentions-and-serial-killers-itself-essay 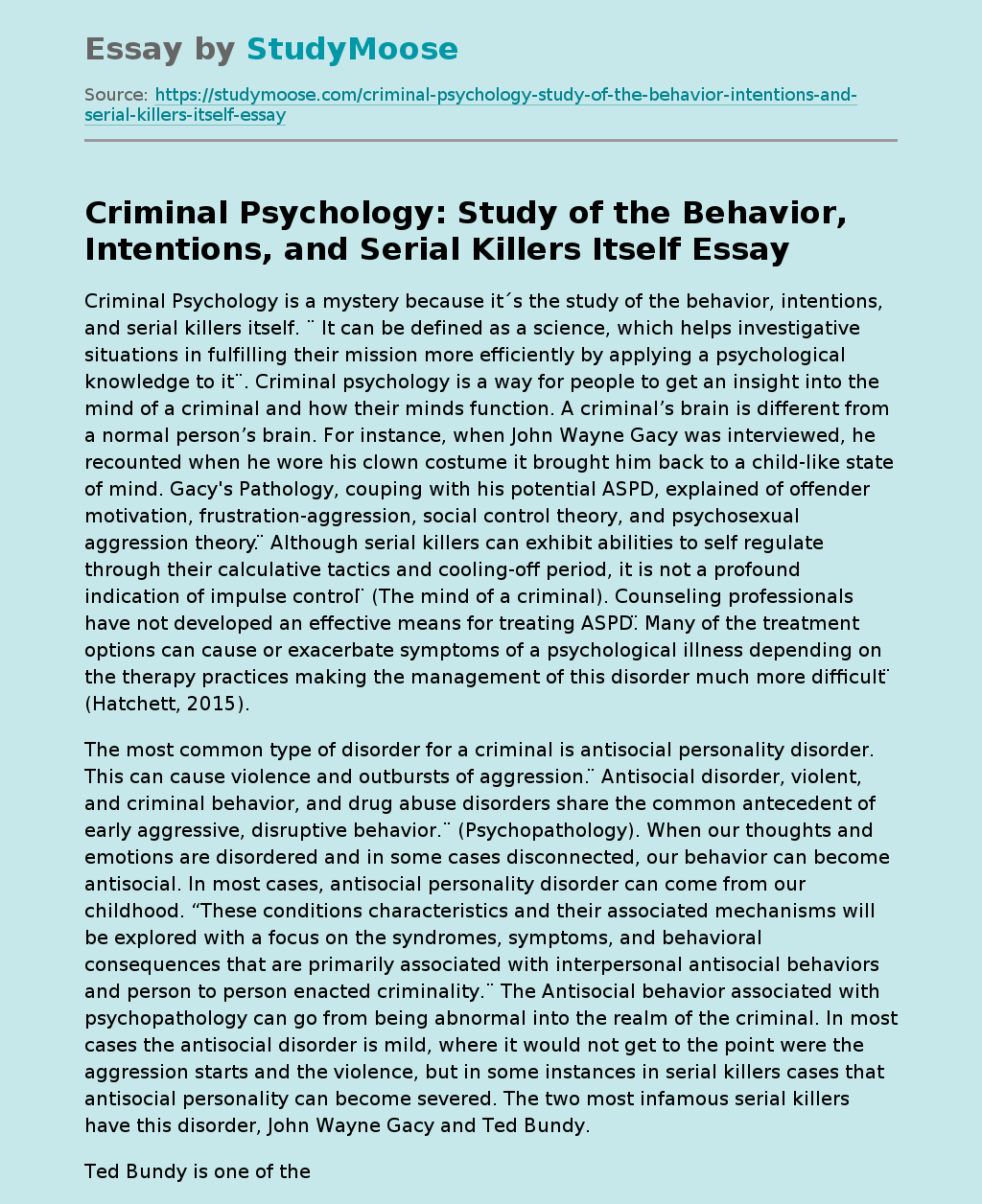