Essay is “Criminal Minds” it is a Police Procedural” about a team of profilers in the FBI’s Behavioral Analysis Units (Criminal Minds 2014). The team’s job is to establish a profile of the suspect. The suspect is always a criminal who committed unusual crime. This program is chosen because it clearly displays social deviance. The suspects in this Police Programs are not ordinary criminals. They usually suffer from a mental or personality disorder that makes the incapable of remorse. The criminals were serial killer, child rapist, cult murderers and cold blooded murders.

Don't use plagiarized sources.
Get Your Custom Essay on Criminal Minds Just from $13,9/Page

The FBI team often meets together and study the evidence in the crime scene. The evidence may include the manner of killing, the motive, the weapons use and the strategy to conceal the crime helps the FBI establish a personality profile of the suspect or criminal. The criminals in these programs are social deviant and the where labeled by the police organization as deviant based on the crimes they committed.

The FBI behavioral analysis unit who work hand in hand with the police, labels the suspects as not the everyday criminal. The criminals were extremely dangerous and usually suffering from behavioral disorders or mental illness.

They are not normal criminals who committed their crimes because of survival or to earn money. These criminals usually commit their crimes due to passion, for fun or for some superstitious belief. The FBI unit labels these criminals as the most deviant of all criminals; they are extremely dangerous and will continue to commit their crimes until they are caught. It is therefore necessary for the FBI unit to build a personality profile of the criminal in order to known which is the next victim and where will be the next crime. The FBI team is the one doing the labeling for the deviance. The crimes committed by the criminals and the criminals themselves could be considered as primary deviance (Siegel, 2008). The crimes are murders; homicide, robbery and rape are all primary deviance. The criminal is pursued, arrested killed or sent to jail by the FBI team. This is the penalty of the criminal. They are treated and penalized like any ordinary criminal but the FBI team labels them as extremely dangerous criminal. This is secondary labeling. Because they are labeled as extremely dangerous, they become top priority of the organization. The FBI may sometimes employ questionable practices just to capture these extremely dangerous criminals. They may sometimes hack the email of the suspect just to know what is in his mind.

Another instance of secondary labeling is when cult members commit a crime and then when another crime is committed, they were being blamed for the crime simply because they are cult members. Some individuals in this program are not actually criminals and do not actually commit a crime. Such as in the episode where Satanist are considered suspect for the crime they did not commit. However, the FBI have encountered murders and homicide committed by cult members. Hence, when a murder was committed and style of the murder is similar to a cult, the FBI agents quickly concluded that the Satanists were involved. There are no cults in the community but there are Satanists who meet together in discos and private gatherings. The NBI team felt that the Satanists were responsible for the crime simply because they are Satanists. This is secondary deviance. According to Sociologists, secondary deviation is what causes individuals to become hardened criminals. Stigma could also be found in this episode. Satanists in the film were considered deviants even though the leader of the Satanists claimed that they were only misunderstood, He has a valid justification but because the society considered Satan as the king of Evil, his believers were considered evil and deviant.

The four functions of Emile Durkheim are also portrayed in the series. In the Season three- episode 12, entitled “3rd Life.” A teenager was found murdered and her friend went missing and believed to be abducted. The task of the FBI agents was to create a profile of the killer and finds him before he kills the other teen. According to Durkheim, Deviance serves four functions. The first is Affirming Cultural Values and Norms (Thompson, 2012). Murder and abduction that takes place in the episode go against the cultural values of norms of the American society. The murder is also against moral standard of the US society. It is wrong to murder this is the moral standards. Durkheim third function of deviance is promoting social unity. The crime allowed all community members to participate in the hunt for the killer and kidnapper.

Everybody is willing to give information regarding the events related to the murder. People do not approve crime. When crime rate is high they group together and pressure the government to do something about the crime. Some participate in solving crimes and cooperate with the government by standing as witness or providing information to help solve the crime. Uniting the community is the third function of deviancy. Community may also group together to stigmatize people who are considered not following the norms. The people in the TV series agreed that Satanists are bad. Both the policemen and the FBI agents stigmatized the Satanists. The fourth function of deviancy according to Durkheim is it encourages social change. The social change in the TV series as brought about by the crimes is implied. FBI procedure are revised whenever they encounter a very difficult to find criminal. 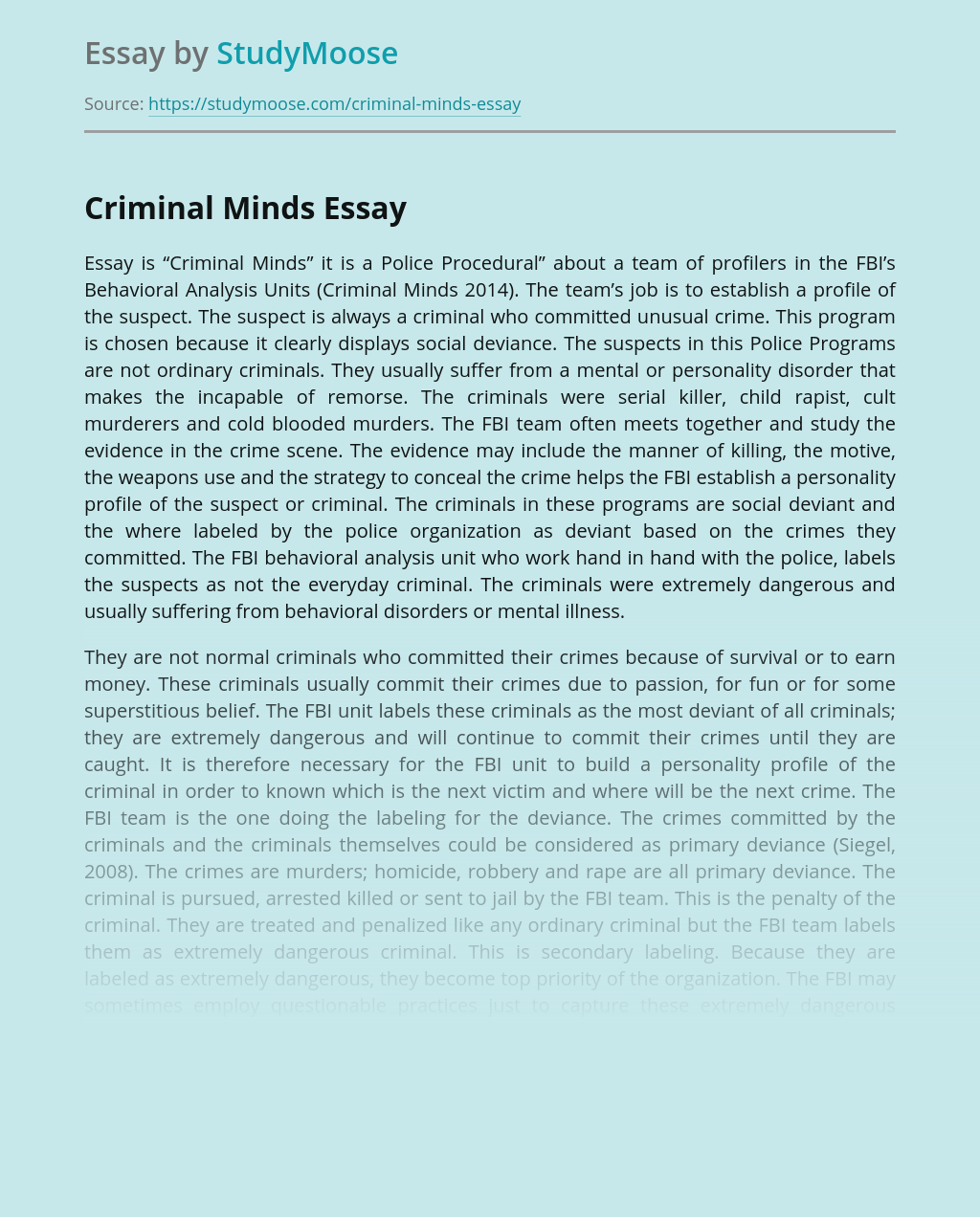 Purpose and Effectiveness of Police Patrol

To begin studying this topic I’d like to provide a brief definition of a patrol officer. In law enforcement, patrol officers are uniformed police officers assigned to patrol specified geographic areas. They are the officers most commonly encountered by the public. Their duties include responding to calls for service, making arrests, resolving disputes, taking crime...

Introduction Social learning theory is one of the most regularly looked at theories in the field of criminology. The theory clarifies that criminal and deviant behavior comes from replica and support of one’s environment. Its applications attempt to explain why specific people tend to take part in criminal activities and why others avoid it. Social...

Conventional policing generally includes officers answering require service. Standard methods of policing rely heavily on deterrence through a visible existence of the police on patrol. Nevertheless, lots of social modifications have taken place over the years and traditional policing approaches may not be as effective in attending to the requirements of the communities. Neighborhoods have...