Over the last several decades psychologist, sociologist and criminologist have tested the different theories of what causes criminal behavior. Prior to defining criminal behavior, it is important to first define crime in itself. Is crime merely the act of breaking the law or does the depths of crime go beyond what theories have been established? In accordance to S. Gottfredson, & Bersani, B. (2009), “Crime is the breach of rules or laws for which some governing authority such as the legal system can ultimately prescribe a conviction”.

Don't use plagiarized sources. Get your custom essay on
“ Different theories of what causes criminal behavior ”
Get custom paper
NEW! smart matching with writer

Criminal Justice System, para. 1-4). Although most people would agree that crime is an act in which a person makes a conscious choice to break the law; not all violations of the law are considered a crime. If we were to break down the word crime, we find that it originates from a Latin root meaning ‘charge’ (in law) and a Greek root meaning ‘judgment’ (Harper, 2007). When we think about the word judgment we consider courts, justice system, and even corrections.

This is how the connection between crime and law go hand in hand.

When the topic of crime and judgment are placed in the same sentence it is common for people to think of the criminal justice system. A system designed by mankind to alleviate criminal activity by creating a structured guideline in which is intended to be upheld by the people of the community to include higher official authorities’. Within this structure are three levels of government; federal, state, and local. The federal government of the United States of America is the central government body and is intended to create laws and enforce the laws of a society.

The state is there to maintain order and the local government is there to provide stability. Among all these levels of government, they all serve the same purpose; to make laws, provide services, and keep order. However, the law is the foundation, the pursuit of balance, within the criminal justice system; a system that was established in the early years known as the ‘Declaration of Independence. ’ The criminal justice system consists of many agencies in which balance and order are maintained within the community. Of these agencies are police, court systems, and correction facilities.

Each of these components shares a common goal amongst the criminal justice system; to bring forth fairness, reform criminals, and reduce crime. However, in order for these agencies to work together in accomplishing these goals they are expected to follow a sequence of events that consist of five major stages. The first step into the world of criminal justice is the ‘crime’. A crime has had to have been committed and reported for the police to respond and take action. In general, the police are expected to uphold and enforce the law and are generally the first to show up to the scene when the crime is committed.

The second way in which a police officer may arrest or investigate a crime is through a warrant. In criminal proceedings, a warrant is a written document known as a ‘writ’ that is issued by a judicial officer directing a law enforcement official to perform a specific act such as apprehend or arrest one or more offenders. The warrant grants the officer protection from damages if he or she performs it. The investigation and arrest conclude the first major stage within the criminal justice system. The next stage that we will discuss consists of three stages within one system; this is known as the court system.

The courts system is set up to prosecute and conduct fair and impartial trials. They are the second step within the criminal justice system and expected to maintain the law by protecting the rights and freedoms of anyone facing the justice system. Through the court systems there are three major stages in which support the criminal justice system. These stages are pretrial activities to include bail, preliminary hearing, probable cause, and grand jury; trial that includes, witness testimony and sixth amendment; and sentencing, which includes consecutive sentencing and concurrent sentencing.

Pretrial activities include four major events; first appearance, which is the first time within 48 hours of arrest that the offender is seen before a magistrate (judicial officer) for an initial court appearance. At this time the judge will advise the accused of the charges from the arrest, their rights, may provide an opportunity for bail. The second major event is the preliminary hearing; at this time the courts will decide if there was sufficient amount of evidence against the offender to continue the judicial process.

During this time the judge seeks to establish if there is probable cause to believe that a crime had been committed and if the defendant had committed it. The third major event will focus on information and indictment; whereas the prosecutor may request a continuance on a case by submitting a formal written accusation based on the outcome of the preliminary hearing. In some states it is required that an indictment be returned by a grand jury prior to continuing a case. At this time the grand jury will hear and review all the evidence presented by the prosecution and make a valued-based decision on whether the case should precede to trial.

The fourth and last stage of pretrial activities is the arraignment. This will be the first appearance of the accused before the court that holds authority to conduct the trial. At this time the defendant stands before the magistrate and hears an official reading of the information or indictment against him or her. They are advised of their rights and are asked to enter a plea such as guilty, non-guilty, or no contest. The second stage within the criminal justice court systems is trial. In a criminal proceeding, the trial consists of an assessment of all the presented facts that pertain to the case.

In addition, the courts will determine whether the submitted evidence was pertinent to the case for the purpose of convicting or releasing the defendant. The last of the stages within the criminal justice court systems is sentencing. Once the defendant is found guilty, they are normally issued a sentence such as paying a fine, being placed on probation or incarceration. Offenders that have been found guilty on multiple charges may be ordered to serve a consecutive or concurrent sentence.

A consecutive sentence means the offender will serve multiple sentencing such as one starting after the previous sentence has ended. A guilty party serving a concurrent sentence means they serve multiple sentencing all at the same time, rather than one right after the other. Amongst all the stages of the criminal justice system the courts will be responsible for deciding which cases are criminal and non-criminal and determining whether the offender is guilty or innocent. This determination will lead us through the fifth major stage within the criminal justice system known as corrections.

Once the guilty person(s) has been sentenced the correction stage begins. Correction facilities are known as incarcerated properties within the justice system that provide a safe, humane environment, and supervision of guilty parties. They are considered the third step and the fifth stage of the criminal justice system and are designed to protect the community by keeping dangerous offenders locked up. Depending on the crime some offenders may be sentenced to prison time, whereas others are ordered to prison only to have their sentence suspended and a probationary term imposed.

Other offenders who had already served a substantive amount of prison time may be released on parole. Overall, the correction facility is expected to follow through with sentenced time issued by the courts and respect the legal and human rights of the offender. In addition to incarceration the corrections stage of the criminal justice system also serves as a rehabilitation program for convicted felons by allowing them the opportunity to reform and reintegrate back into society. These programs may include inpatient or outpatient centers, court ordered classes, and maybe job placements. 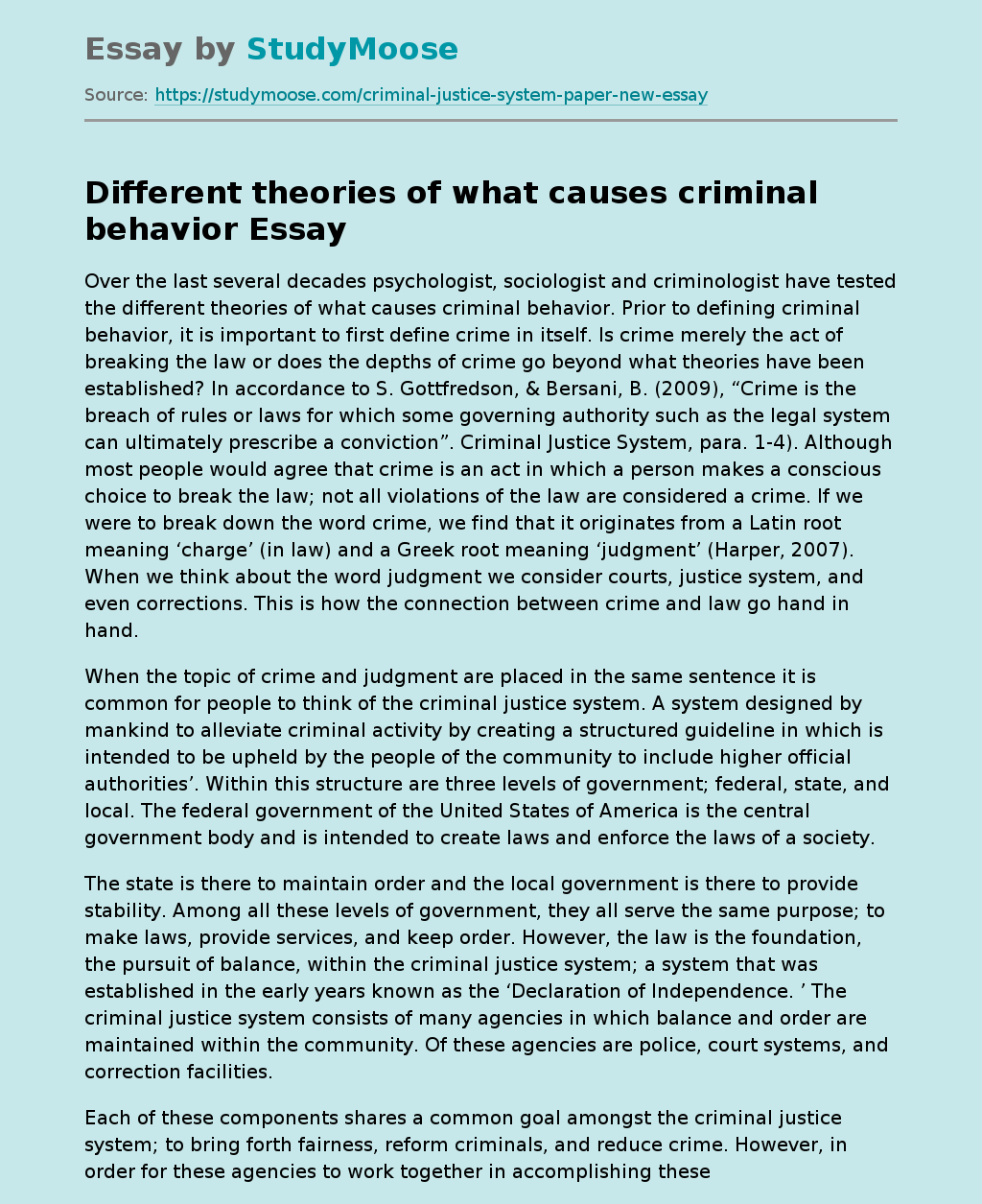