Include a discussion about current trends in punishment. Two main purposes: Retribution & Prevention. Retribution looks back to past crimes and punishes individuals for committing them, because it’s right to hurt them. Prevention looks forward and inflicts pain, not for its own sake, but to prevent future crimes. There are four kinds: General deterrence, Special deterrence, incapacitation, and rehabilitation. Since the mid-1980s, reformers have championed retribution and incapacitation as the primary purpose of criminal punishment.

Don't use plagiarized sources. Get your custom essay on
“ Criminal Chapter Assignments ”
Get custom paper
NEW! smart matching with writer

The importance of the general principle of Actus reus, is the physical element in a crime. We punish people for what they do, not who they are. There are three elements of criminal liability consist of:

Manifest criminality is the requirement that mental attitudes have to turn into deeds for a “crime” to be commited. It leaves no doubt about the criminal nature of the act. “Caught red handed”. I agree with this principle because if I think about killing my neighbor it is not a crime unless I act on it.

The two kinds of criminal omission: Failure to report and failure to intervene. They are criminal omission only if defendants had a legal duty, not just a moral duty, to act. If you are required by law to report things such as, an accident; reporting child abuse; filing an income tax return; registering a firearm; or notifying sexual partners of positive HIV status, then these can be considered acts.

“Good Samaritan” doctrine, which imposes a legal duty to help or call for help for imperiled strangers. American bystander rule is there’s no legal duty to rescue or summon help for someone who’s in danger even if the bystander risks nothing by helping. Only a few jurisdictions follow the “Good Samaritan” rule, nearly all follow the approach of the American bystanders rule. I believe in the “Good Samaritan” rule, because of morals alone. If you can save or prevent someone from being subjected to a crime or death, you have a moral obligation to do something. To stand by and do nothing should be a crime, as if you allowed the crime or harm to happen.

Mistake is a defense whenever the mistake prevents the formation of any fault-based mental attitude; Namely, Puposedly, Knowingly, Recklessly, or Nigliently. Mistakes are sometimes called a failure-of-proof defense because defendants usually present enough evidence to raise reasonable doubt that the prosecution has proved that they formed the mens era required for criminal liability.

What are the levels of culpability of each relative to the other? The MPC specifies that all crimes requiring a mental element have to include one of these degrees of culpability: Purposely – having the “conscious object” to commit crimes. “You did it on purpose.” Knowingly – the state of “knowing” and “awareness”… it is enough that I’m aware that it’s “practically certain” that my conduct will cause the bad result. Applies to conduct crimes, awareness is clear. Recklessly – “Awareness”.. in acting “recklessly,” it’s awareness of causing the result itself.

Reckless people know they’re creating risks of harm but they don’t intend, or at least don’t expect, to cause harm itself. Conscious risk creation isn’t as blameworthy as acting purposely or knowingly. The MPC proposes that fact finders determine recklessness according to a two-pronged test. The test has both a subjective and on objective component. Negligently – Also about creating risks. The test for negligence is totally objective, namely, that the actors should have known, even though in fact they didn’t know, they were creating risks. Put into another way; A reasonable person would’ve known she was creating the risk.

Minor crimes where there’s liability without either subjective or objective fault. Strict liability crimes makes accidental injuries a crime. The prosecution has to prove only that defendants committed a voluntary criminal act that cause harm. Supporters argue that there are; first, there’s a strong public interest in protecting public health and safety, and secondly, the penalty for strict liability offenses is almost alway mild. Critics say it’s too easy to expand strict liability beyond offenses that seriously endanger the public. I believe that to punish people that did not harm other people by one of the four MPC culpability, shouldn’t be enforceable. Strict liability opens up a river of sue happy people.

Prosecutors have to prove causation beyond a reasonable doubt. Proving causation requires proving two kinds of cause: Factual cause & Legal cause. Intervening cause is an event that comes between the initial act in a sequence and the end result. The event as well as the resulting injury must have been unforeseeable to a reasonable person. Example: Neighbor A asks Neighbor B to store an expensive painting in their garage. Neighbor B agrees. Neighbor B’s home catches fire and the painting is destroyed.

There are 52 criminal codes in our federal system. The 52 codes defines specific crimes and their punishments that will apply to people within their jurisdiction. There are difference in some of the definitions and the punishments from state to state. There are more similarities than difference though. 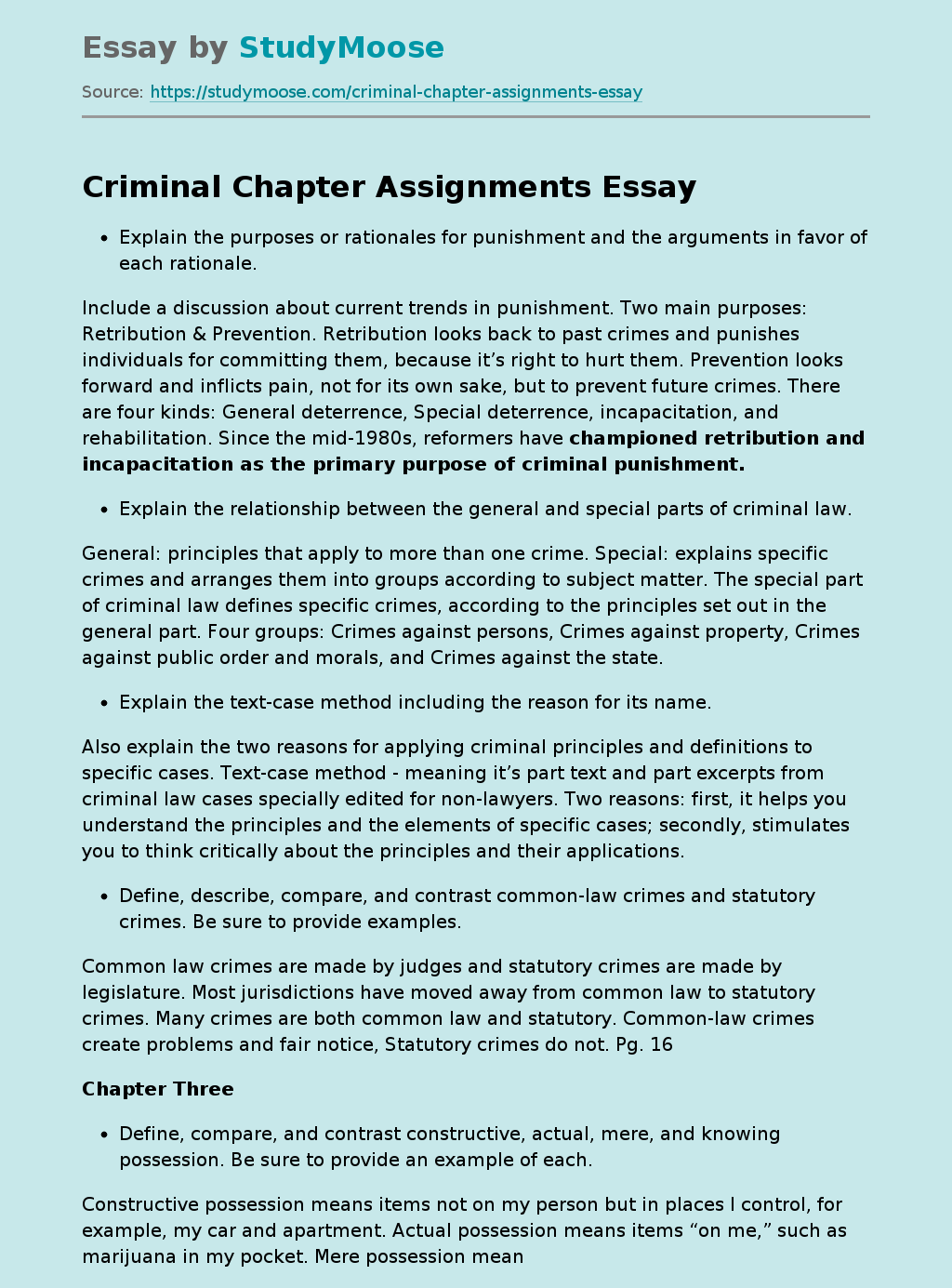