Child abuse clearly has a negative impact on children and can result in behavioral, cognitive, emotional, and developmental difficulties. This may lead to greater difficulties later in life that will extend into adulthood. The use of proper investigation techniques and appropriate handling of cases, however, can result in less traumatization for child abuse victims.

According to Hess & Orthmann (2010), law enforcement agencies are charged with investigating all crimes, but the responsibility is greater when children are involved. Because children are more vulnerable than other members of society, their protection under the law must be greater.

Don't use plagiarized sources. Get your custom essay on
“ Crimes Against Children ”
Get custom paper
NEW! smart matching with writer

Crimes against children cover an extensive range of crimes, including but not limited to: maltreatment, sexual exploitation, sexual abuse, abduction, trafficking and molestation. Child abuse investigations involve many challenges and therefore warrant specific techniques and considerations for successful outcomes in terms of cases solved and prosecutions.

This paper will begin by defining specific terms that are germane to the topic of crimes against children.

The significance of this paper is that it contributes to the criminal justice system by critically reviewing investigative strategies and techniques as they relate to their mission of successful outcomes in crimes against children cases. This paper is written for colleagues and clerisy who have a professional or academic interest in reducing crimes against children through utilizing the best investigative strategies and techniques.

Maltreatment means to treat someone roughly or abusive (Hess & Orthmann, 2010). The four common types of maltreatment include neglect, physical abuse, emotional abuse, and sexual abuse. A. Child Neglect – The failure to meet a child’s basic needs. This could include starving a child, or not keeping a child clean and well-kempt. B. Physical Abuse – Refers to violence against a child. While the laws may vary from state to state regarding the specifics of what constitutes physical abuse towards a child, this term refers to excessive abuse such as punching, strangling, or causing bodily harm to a child. C. Emotional Abuse – Involves causing fear or feelings of unworthiness in a child. This may include hurling insults at a child, or intimidating a child. D. Sexual abuse – Sexually molesting a child, performing sexual acts, statutory rape, and seduction (Hess et al, 2010).

III. Scope of the Problem

The extent of the problem is described by two conflicting views. One on side of the spectrum, there is a maximalist alarmist perspective and on the other side there is the minimalist skeptical perspective. The maximalist alarmist perspective believes that child abuse and neglect is reaching epidemic proportions and unless drastic steps are taken child abuse will continue and only get worse. The minimalists consider the maximalist view to be overly exaggerated and overstated for their own self-serving purpose (Hess et al, 2010). According to Juvenile Offenders and Victims 2006 National Report, child fatalities are the most tragic consequences of maltreatment. An estimated 1,530 children died because of abuse or neglect. 41.1 percent of child fatalities were caused by neglect where physical abuse was also a major contributor. More than three-quarters of the children who died because of child abuse were younger than four years old.

However, some experts believe that child fatalities may be underreported by 50 to 60 percent (Hess et al, 2010). The effects of child abuse are upsetting, disheartening and potentially very dangerous. Child abuse and neglect result in serious as well as permanent physical, mental and emotional damage. Unfortunately, the effects of child abuse may lead some victims to behave in future criminal behavior (Hess et al, 2010). Emotional damage from the effects of child abuse is disturbing. It may cause the victim to have an increased level of aggression along with self-destructive tendencies. Antisocial behavior can put not only the family in harm’s way, but also the community (Hess et al, 2010). Antisocial behaviors along with physical aggression are two of the most constant outcomes of physical abuse. Fear and anger are also incorporated with abused children. Some studies have suggested that childhood abuse and neglect will reduce cognitive skills and can lead to attention deficit disorders. In addition to deficit disorders, neglected and physically abused children do not do well in school. These children tend to produce low grades, lower standardized tests scores and much retention in the same grade, but neglected children are far worse off than those who are physically abused (Chalk, Gibbons, Scarupa, 2002).

A specific technique for a better outcome for handling child victim cases would be to establish a children’s advocacy center. Allowing these centers to place law enforcement officers, child protection workers, prosecutors, therapists, medical professionals all in one center will be to coordinate investigations, prosecution and treatment to the young victim. These centers can conduct child-friendly interviews rather than multiple interviews that may be in an interrogation room or in the house where the abused victim was neglected to such criminal activity. By placing children in an advocacy center and using a multidisciplinary team approach, it is easier for a team of professionals to work together to ensure that the maltreatment of the child is responded to in the best possible way with the least amount of further trauma. These centers “…improve the quality of information and increase the number of successful prosecutions” (U.S. Dept. of Justice, 1999).

Unfortunately in the criminal justice system, law enforcement agencies must vie for federal funding and therefore resources like advocacy centers may not always be available in all cities and towns to coordinate such a team of professionals. Another idea that has been proven to work better than others would be to bring other agencies together and form a multidisciplinary team approach to the situation. The purpose of bringing these teams and agencies together is to limit the amount of times the child is interviewed, to coordinate intervention, and to reduce the amount duplication of agency procedures (U.S. Dept. of Justice, 1999) Joint and coordinated responses help cases not “fall through the cracks” (Hess & Orthmann, 2010). Joint interviews and monitored interviews will help reduce inconsistencies that may occur and improve the quality of information that is given by the child (U.S. Dept. of Justice, 1999).

Investigating child neglect and maltreatment cases can be very demanding and is perceived by prosecutors as the most difficult to prosecute. Protecting the child from further harm, interviewing the child, and the need to involve other agencies are three challenges that occur when investigating child abuse and neglect (Hess et al, 2010). To help address these issues, there are some strategies in place to help children in need. To protect the child from further harm, under welfare regulations and codes, an officer may place a child in temporary custody without a warrant if there is an emergency (Hess et al, 2010). To help overcome challenges (i.e., short attention spans, difficulty discussing the abuse, and the fact the child was most likely told not to tell anyone) when interviewing a child, officers should consider the children’s age, their ability to describe what happened, and the retaliation by the suspect once the child “tells” (Hess et al, 2010). One idea would be to consider inviting a social worker or therapist who has studied child psychology and who is formally trained and has experience talking with troubled and abused children.

Crimes which are committed against children have dire consequences, not just for the victims but for society as a whole. Police investigations of crimes against children require specific strategies and techniques for successful outcomes. With a wide scope of crimes being committed against children, law enforcement officials are charged with ensuring the safety of the child, and getting all the information about the crime from the child. This may involve bringing in social workers, creating children advocacy centers or other mental health professionals in order to provide an environment where children can feel they are safe to talk about what has happened. While some solutions to this problem may be expensive, time-consuming, or difficult; protecting the child is the ultimate goal for law enforcement and proper training for those who are involved in child abuse cases is paramount to bringing justice for these young victims.

U.S. Dept. of Justice. (1999). Breaking the Cycle of Violence: Recommendations to Improve the Criminal Justice Response to Child Victims and Witnesses. Office for Victims of Crime, 6, Electronic Source Only. Retrieved April 15, 2013 from: http://www.ovc.gov/publications/factshts/monograph.htm 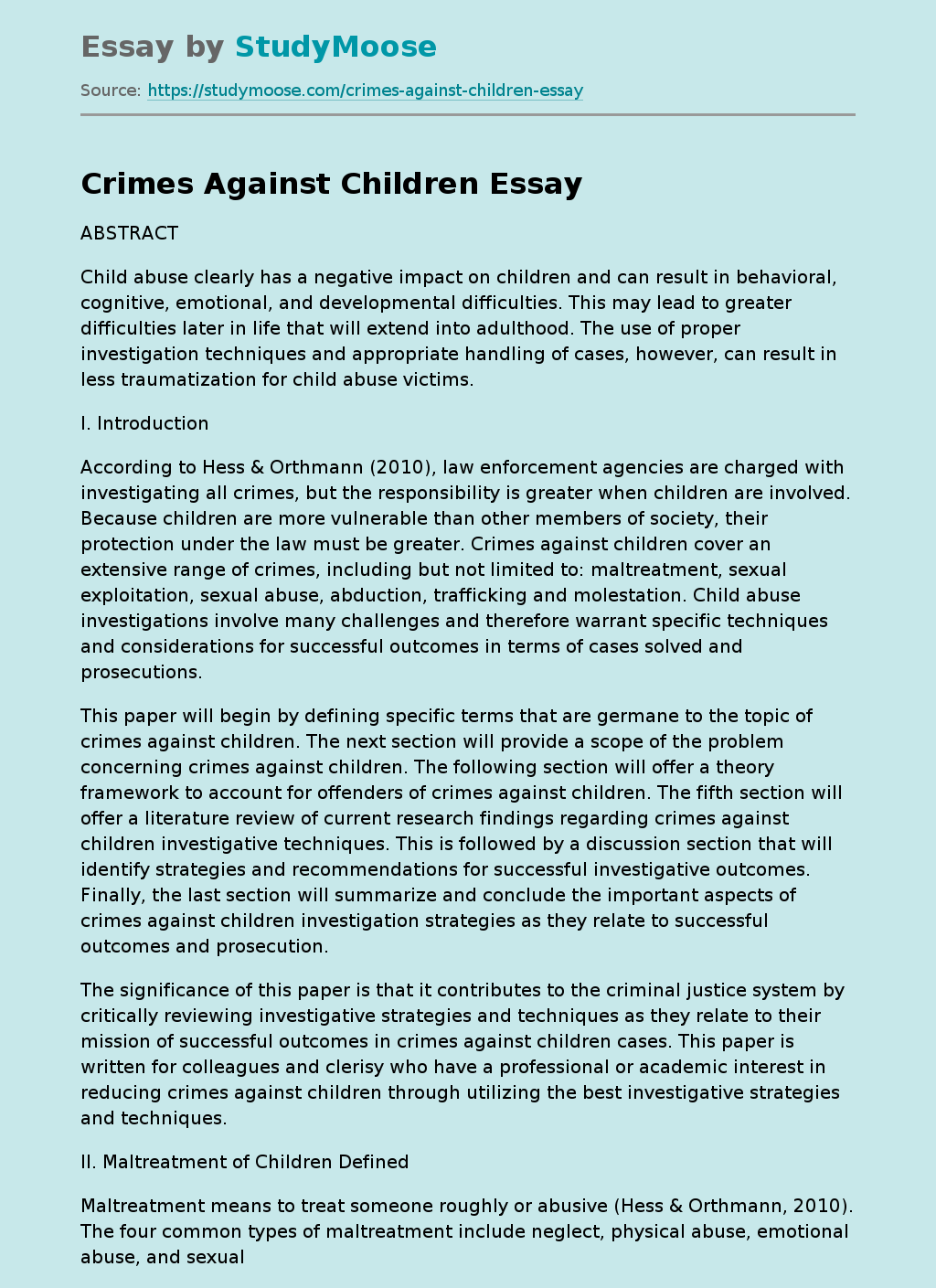