Creon and Koro in the play Antigone by Sophocles

Throughout history, the tragic hero has virtually not changed at all. The play, Antigone, written by the Greek playwright Sophocles and the book Whale Rider, written by Witi Ihimaera, has extremely comparable characters. Regardless of being written thousands of years apart, both story lines are very similar in relation to the tragic heroes. Antigone is the story of a woman who is trying to bury her brother’s body, despite the king, Creon’s, ruling against. The play tells of Antigone and Creon’s struggle against each other leading to Antigone’s eventual death.

Don't use plagiarized sources. Get your custom essay on
“ Creon and Koro in the play Antigone by Sophocles ”
Get custom paper
NEW! smart matching with writer

Whale Rider portrays the story of a young Maori girl who is trying to become the leader of her tribe. The young girl, Paikea (Pai), is persistently blocked by Koro. Creon and Koro, the two tragic heroes are comparable in their lack of equality towards women, their similar tragic flaw of too much hubris and their elitist views directed toward people around them. Creon and Koro both share a lack of respect towards woman.

Creon continually exhibits his contempt towards women in Antigone.

When Creon is talking to his son, Haimon, regarding Antigone’s death, he condemns him by saying that, “Your pleasure with her would soon grow cold, Haimon, and then you’d have a hellcat in bed and elsewhere” (716). Creon believes that because Antigone is a woman, she can be easily replaced. Creon makes it known that he does not think Antigone is important at all and neglects to acknowledge that Haimon might have any affection or love for Antigone, which is why he thinks that he can always replace her.

Koro too has the identical sexist reaction towards women such as Pai right from when she was born. Koro refuses to even hold Pai because she is a girl, and because she is a girl she cannot become a leader. Throughout the film, Koro has hatred that is clearly directed towards Pai. Koro thinks that because Pai is a girl, she is not strong enough to be a leader, or to do anything practical. When Koro tests the male students at his school and none of the boys succeed in finding the whale tooth and Pai does, Koro chooses to overlook the fact that the gods choose Pai as the next Maori leader. Koro clearly has a harsh sexist attitude that remains until Pai almost drowns, when she is actually trying to save the whales to show Koro she is the leader and is strong.

Although Koro and Creon exhibit these anti-female outlooks from the start their stories, the conclusions of each are different. While Creon’s sexist attitude remains until the end of the story, Koro changes in the end of Whale Rider. Koro identifies where he was wrong and corrects himself, while Creon thinks of himself as higher than women until the end of the story and does not change his sexist attitude. Creon and Koro both have hubris and have way too much pride for their own good. In Antigone, Creon is going to be Antigone’s father in law because of Antigone and Haimon’s love for each other, but regardless of their family relation, Creon shows no compassion or sympathy. When Creon realizes that the person who buried Polyneices is Antigone, he condemns her to death. Creon commands Antigone’s death despite the fact that he does not want to because of their close relationship, all because of his pride. If Creon were to release Antigone it would make him look weak and Creon could not have that reputation. This displays how Creon would rather his title be strong than the existence of a family member. When the Choragos attempts to tell Creon to free Antigone, he admits that it is difficult to overcome his pride. Creon tells him that “it is hard to give in! But it is worse to risk everything for stubborn pride” (731).

Creon thinks what he has been doing throughout the story is right and he does not see his mistakes, which lead to his decline at the end of the story. Koro is closely related to Creon in the sense that he is also incapable of conquering his own arrogance. Throughout the movie, Whale Rider, Pai persistently strives to show her grandfather her strength and even goes as far as trying to join the school Koro establishes because she wants to learn the proper way to be the leader of the Maori culture. Koro continuously neglects Pai and denotes her every move because he believes that only a male can be the leader, he cannot put his pride aside to let a new leader emerge. Koro teaches the boys at his school to use a taiaha which is generally something only boys do, however Pai secretly follows Koro’s lessons and learns from her taiaha winning champion uncle how to use the taiaha and ends up beating Hemi, one of Koro’s male students. Koro is furious when he finds out, which only leads to a worse relationship between Koro and Pai, which is not the result Pai was looking for.

This shows how his hubris is interfering with an obvious calling for a new leader. When Koro believes that he has failed at finding a new leader, he refuses to let Pai be the leader because he has pushed her away so much. When the whales beach themselves, Pai rides the whales back into the water and saves them. By doing this, Koro realizes and is now aware that Pai, who was the one person he did not allow to try and achieve his power, was the one person destined to be the leader. His pride keeps him from selecting the leader the Maori culture needs, but Koro learns his mistakes at the end of the story, whereas Creon does not get a second chance to redeem himself. Creon and Koro have very comparable views on higher powers and neither of the men listens to higher powers nearly as much as they should. Creon disregards the gods’ intimations throughout the play up until his own life is at risk. When Antigone takes matters into her own hands and buries Polyneices, Creon’s opinion is that the gods agree with him about not burying Polyneices and whoever disobeys him should be punished.

When the Choragos questions him if the gods may be responsible for the burial of Polyneices, he responds, “’The gods!’ Intolerable!” (703). Creon is enraged that someone has the nerve to inquire that the gods may be against him. Creon intentions are not to please the gods, but have people believe that the gods are on his side, therefore allowing Creon control over his people. Koro is very similar to Creon as he does not ask for help from his ancestors until he is in trouble. Koro’s search throughout the movie is to find a new leader for the Maori culture, however he only uses the ancestors for help when the whales beach themselves and does not ask the gods earlier on because he wants to be the one to handpick his own leader. Koro only eventually called out for the gods after he has been unsuccessful at finding a new leader.

Ironically, at Koro’s school, he preaches to the boys to put their trust in their ancestors; however he does not trust in the gods as much as he stresses to the boys because he does not ask for the gods power when he fails at finding a new leader and predictably spends days mourning in his own wrong doings. Both Creon and Koro lack much faith in their higher powers and are hypocritical in the way that they preach to others to believe in their higher powers, but do not do so themselves. Both Creon and Koro exemplify sexist attitudes throughout the Greek tragedy and film, along with their lack of humbleness and their personality that reflects on them thinking they have a higher rank than everyone. The tragic heroes in “Antigone” and Whale Rider, Creon and Koro, are very similar. Their closeness shows that the tragic hero has not changed in the past three thousand years. The stories both have women trying to persevere in a world where they have less rights, and strong leaders trying to suppress them.

Creon and Koro in the play Antigone by Sophocles. (2016, Mar 19). Retrieved from http://studymoose.com/creon-and-koro-in-the-play-antigone-by-sophocles-essay 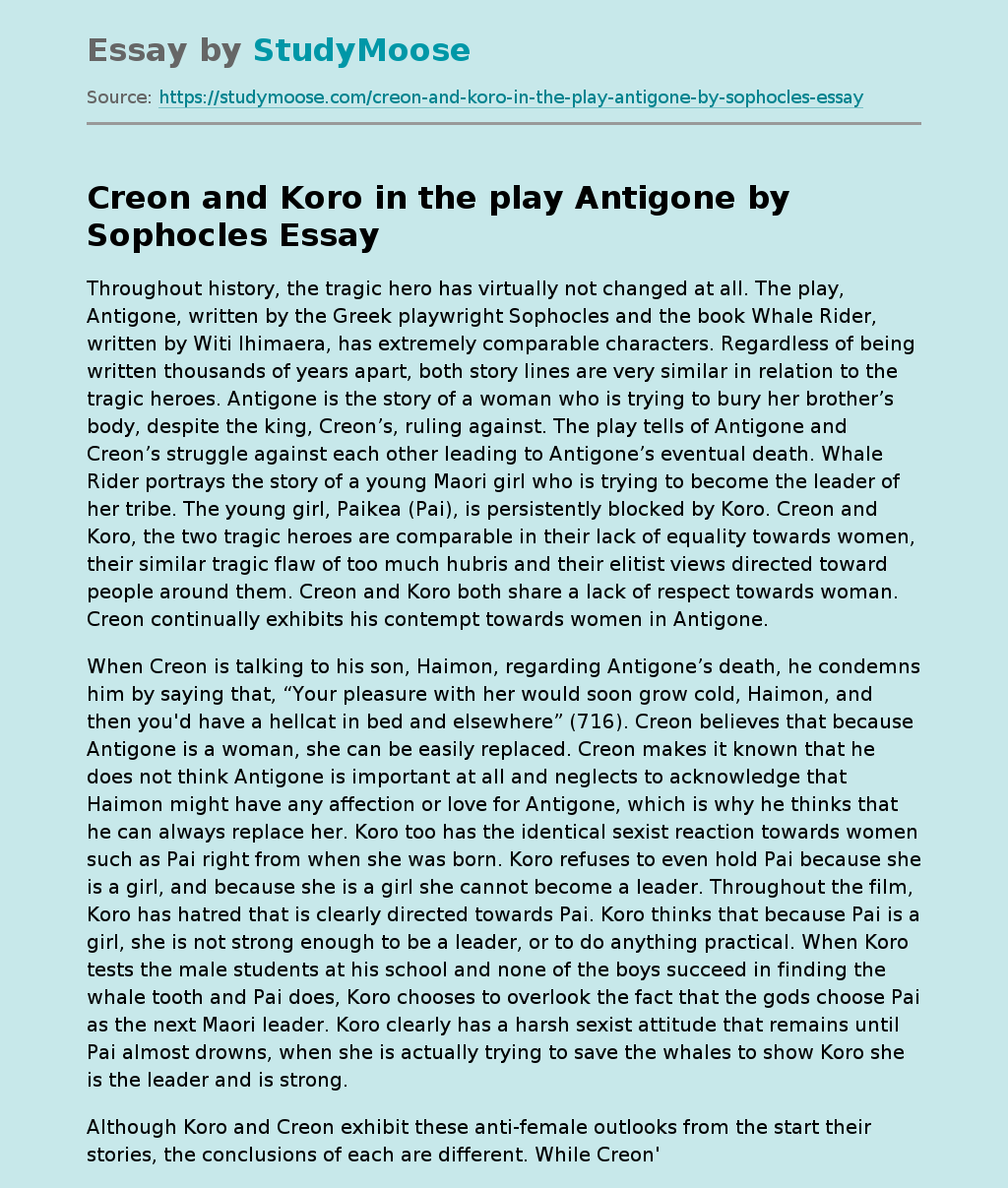