This paper seeks to answer the thesis question: “Are other cultures funeral rituals more emotionally healing or generally more beneficial than the customs we are used to; or are we becoming a society of direct cremations making people disposable like many things in today’s society? ”

Don't use plagiarized sources. Get your custom essay on
“ Funeral Rituals in Different Cultures ”
Get custom paper
NEW! smart matching with writer

(Brust Funeral Home 2003) They are an important rite of passage as well as a ritual such as baptisms, graduations and weddings. This gathering together in a satisfactory environment begins our mourning process, expresses our grief and is the beginning of the healing process. Funerals can be as unique as the individuals’ life they celebrate and can be held in any location requested by the family. An example of this is in May of this year I was to make a family arrangement in a home.

When I arrived a fellow, about 30 years old said this is my moms house (the deceased) I do not want to arrange here can I drag you off to a restaurant, so off we went. The arrangement was anything but boring; he planned to have a backyard full traditional funeral in his backyard with whole pigs roasting on a pit, a live band, caterers and his mom dressed in traditional Croatian attire. A bag piper led the procession from the front yard to the back yard and curiosity had the best of people.

Many cars stopped to have a look. The casket was open for viewing in a tent and taken out of the tent at 8:37 pm when I then closed the casket.

This ended up to be a very memorable funeral for me, as the son could not thank me enough for everything I did for him as he said that everything was perfect and every wish that he wanted to give his mom was met. Life after death has always been a major theme in all religions and without question, each form of religion deals with their own particular belief system. Roman Catholics have a choice between burial or cremation as the Greek and Jewish Orthodox faith oppose cremation. A Jewish funeral is a sacred rite and is taught with dignity through tradition. The family of the deceased should contact the Rabbi immediately.

They believe the body, which once held human life retains its sanctity. In the Jewish tradition, the greatest respect and consideration are given to the dead. Families have special dress for the mourning period, flowers are inappropriate, embalming and viewing are avoided and interment takes place as soon as possible after death. The preparation and burial of the body are highly valued “mitavot’ which is an act of kindness carried out without an ulterior motive. When a member of the community dies, the entire community becomes involved to assist the deceased’s family where possible.

Any questions or concerns regarding funeral arrangements go directly to the Rabbi. Funeral directors are only able to be of assistance if the Rabbi okays it and the funeral director strictly abides by their Jewish customs. According to Jewish tradition, the deceased is not to be alone prior to burial and a Shomer (guardian) will show up at the hospital and stay with the body (The Chevra Kadisha of the Columbia Jewish Congregation, 2001). Autopsies are usually not performed, as this would be considered a desecration of the body. Jewish law requires that the body be cleansed as an expression of respect. This is called Taharah.

A holy society of men and women who wash and cloth the body are called Hevra Kadisha. A special casket is made with is called an Aron. It is entirely made of wood as not to interfere with the natural process of returning to the earth. The clothing is called Tachrichirn, which are usually plain white shrouds to demonstrate the equality of all. Men would wear a Kipah. Between the time of death and the funeral, a special family member is chosen and his job is only to attend to the deceased. In addition, he is called an Onen. He is forbidden to drink wine, eat meat, or fulfill any sexual obligation with his spouse.

Funeral services may be held in a synagogue, a funeral home or a gravesite. A eulogy is called a hesped and psalms are chanted by a cantor. When the casket is carried to the grave, the pallbearers customarily stop seven times. The casket is lowered into the grave using a reverse shovel until a mound of dirt covets the casket. As to why do people certain activities in funeral rituals has its symbolism and social significance. It was found that contemporary anthropological studies interpret funeral customs as symbolic expressions of the values that prevail in a particular society.

This could be observable by the fact that approach is strengthened by the observation that much of what takes place during a funeral is determined by custom so that even what people feel, which are manifested during death rituals, can be influenced or controlled by tradition. This could explain the fact that mourners who may not have any relation with the deceased may be hired to cry and show some grief. One can add the fact that the time and place where relatives are expected to feel and express their feelings may be dictated by the rules of customs and traditions. (Encarta Encyclopedia, 2007) 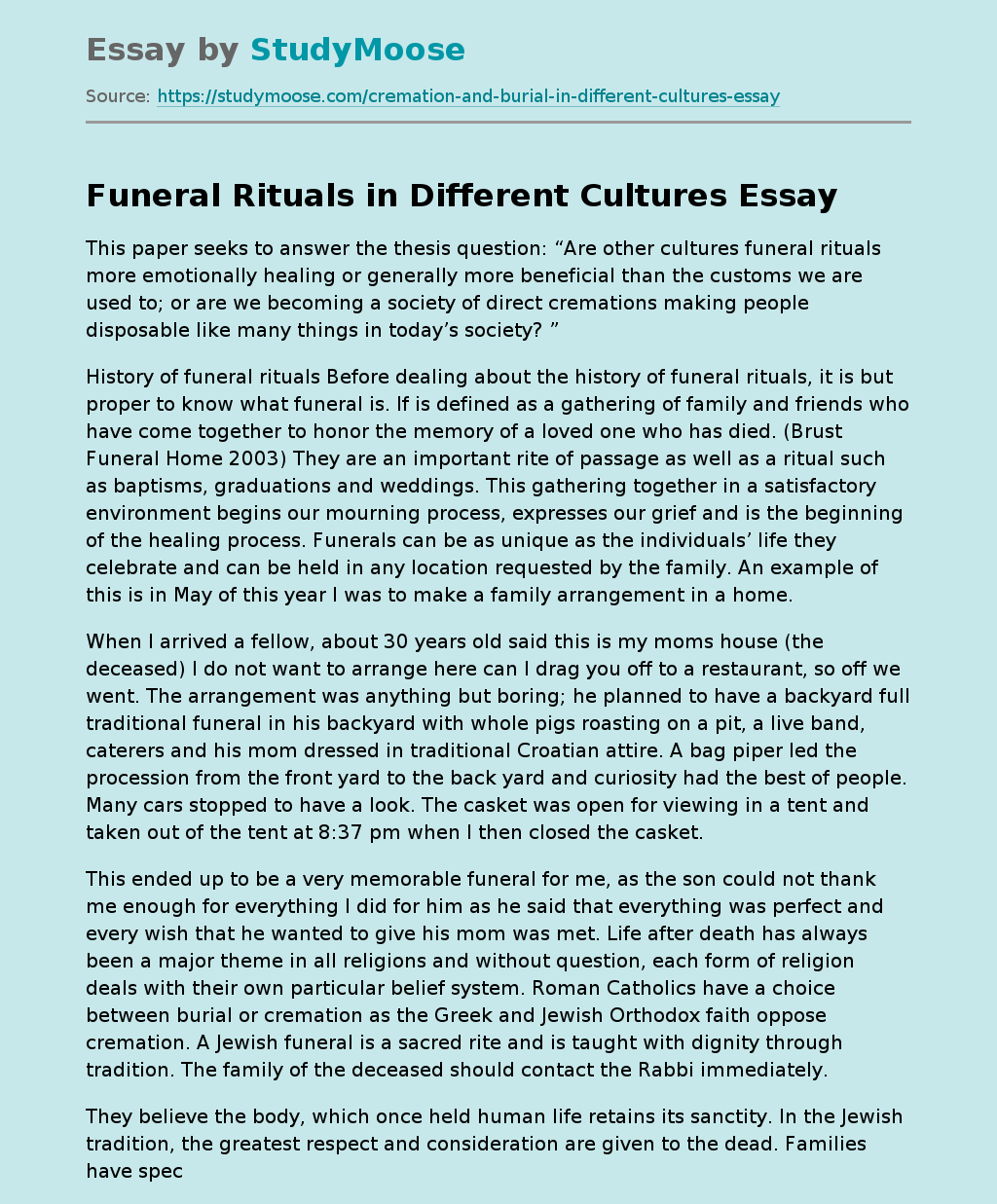