Kenneth Branagh takes Hamlet from play to screen in an intense, full-length adaptation and he got it right! Gregory Doran also takes a whack at bringing Hamlet from the stage to the screen but with a more modern-day interpretation. Branagh restores Hamlet’s greatest scenes and brings out the most in Shakespeare’s awe-inspiring revenge-tragedy plot; in both performance and direction, Branagh displays energy and cogency. The language has the upmost clarity and makes the film feel accessible and comprehensible for a range of viewers.

Branagh tends to rant on and shout throughout the film, especially in his soliloquys, but to the audience it could feel commanding and passionate and so it creates quite an impressive effect. The musical scores are generally helpful, although on occasions they don’t quite fit in with the mood, for example in Act 4, Scene 4, during Hamlet’s speech, the music just made it more humorous rather than serious and dramatic, honestly it sounded more like a cheesy American speech with a flag in the background! At the start of the film, the setting is a bit weak, with the shaking of the earth and the appearance of the ghost proving to be a poor attempt at special effects! However the film then gets flooded with colour and majestically inviting grand halls and rooms which are truly beautiful.

The BBC’s adaptation of Hamlet (2009), takes a modern-day approach; from the start it is clear that this adaptation is modern dress, Hamlet wears jeans and a T-shirt and he kills Polonius with a handgun, as well as there being Helicopters and women in military roles.

Some dialogue and scenes were ‘trimmed’ and adapted to suit viewers of the modern day and unlike the exuberant, bravura styling of Branagh’s version, Doran has favoured a more refined minimalist dramatization. Whilst the production design is theatrical, Doran directs the camera in a manner that is more typical of television; he uses a few cinematic flourishes and can reach angles that would be impossible on the stage.

The use of modern CCTV may enforce the element of surveillance but their clumsy, intrusive functioning is more distractive rather than innovative. It is interesting however how Doran puts a camera in Hamlet’s hands to highlight that character’s observations of others. Onstage, Tennant made eye-contact with the audience, bringing viewers into the plot and the tense impression of the play; this quality was also apparent in the film where Tennant looks directly into the camera, enhancing the meaning behind the text whilst recreating the theatrical intimacy. Branagh doesn’t stray from the original text in his exciting adaptation of Hamlet and the cast, acting, set and overall production was brilliant and can really captivate viewers. However despite the fact the former Doctor Who star tackled his role with an excellent fierceness, Doran’s modern-day approach was nowhere near as dynamic as Branagh’s performance. 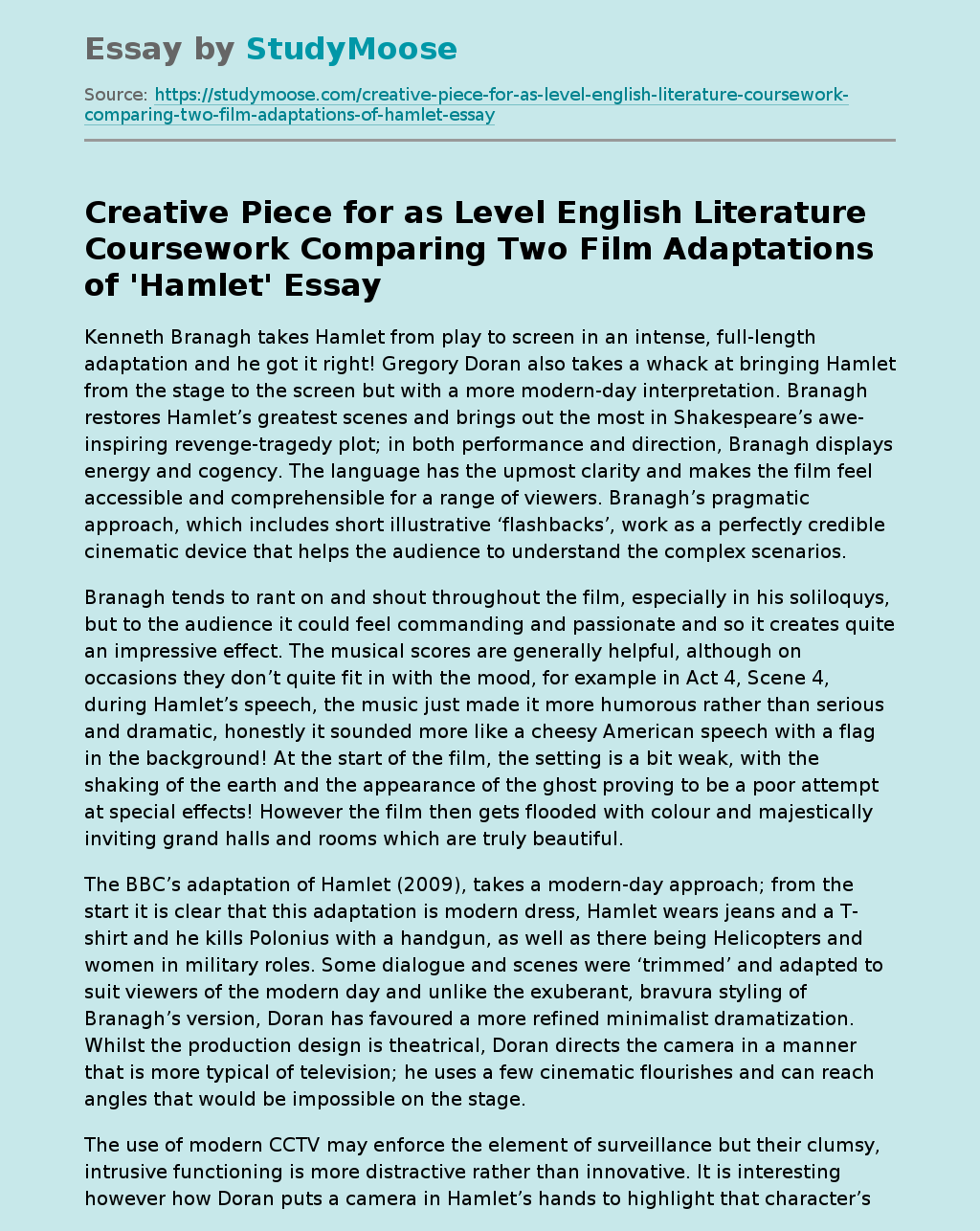